A Mamluk Manuscript on Horsemanship

During the rule of the Mamluks who ruled in Egypt and Syria from 1250 to 1517, the presence of Crusaders coming from Europe seems to have stimulated a great interest in the military arts, weaponry and cavalry training among rulers in the Near and Middle East. The cavalry training was designed to improve the skills of soldiers who practised jousting exercises and equestrian games to prepare them not only for battle against the Crusaders but also for entertaining large crowds of spectators in specially-built stadia or hippodromes. 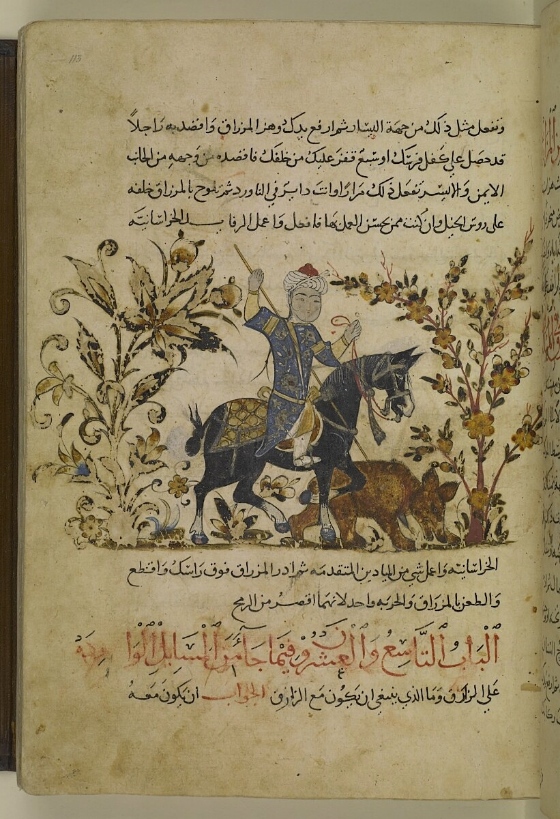 A fourteenth-century Mamluk manual on horsemanship, military arts and technology from the British Library’s collection of Arabic manuscripts (Add. MS 18866) has just been uploaded to the Qatar Digital Library. Its author, Muḥammad ibn ‘Īsá ibn Ismā‘īl al-Ḥanafī al-Aqṣarā’ī, died in Damascus in 1348. The colophon states that this near contemporary copy of the manual was completed on 10 Muḥarram 773 (25 July 1371) by the scribe Aḥmad ibn ‘Umar ibn Aḥmad al-Miṣrī, but it is not certain whether in Egypt or Syria. The manuscript came into the Library of the British Museum (now British Library) in 1852, having been purchased at the auction of the estate of Sir Thomas Reade, one time jailer of Napoleon Bonaparte (for more on the manuscript’s provenance see our earlier post 'Sir Thomas Read: knight 'nincumpoop' and collector of antiquities'). A very similar illustrated copy of the same work, dated 788/1366, is preserved at the Chester Beatty Library, Dublin (CBL Ar 5655). 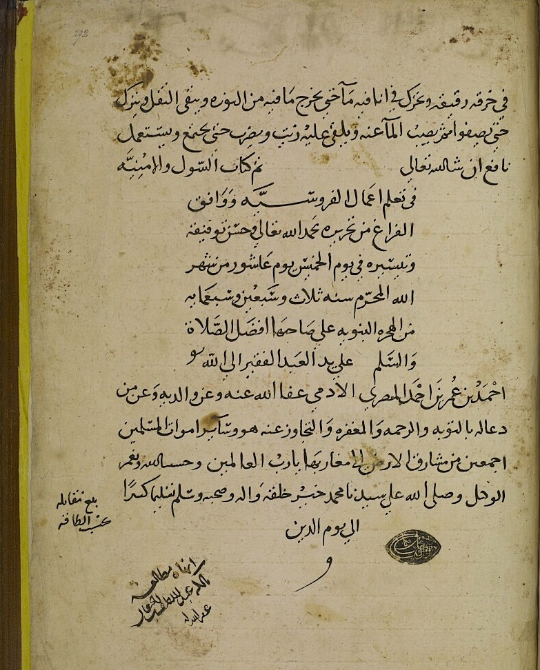 The colophon giving the name of the scribe Aḥmad ibn ‘Umar ibn Aḥmad the Egyptian (al-Miṣrī) and the date of completion as 10 Muḥarram 773 (25 July 1371). Although the scribe was Egyptian, it is not certain whether the manuscript was copied in Egypt or Syria (Add. MS 18866, f. 292r)

The title-page names the work Nihāyat al-su’l wa-al-umnīyah fī ta‘allum a‘māl al-furūsīyah (‘An End of Questioning and Desiring [Further Knowledge] concerning Learning of the Different Exercises of Horsemanship’) which is an example of furūsīyah, a popular genre of mediaeval Arabic literature embracing all aspects of horsemanship and chivalry. The manuscript itself deals with the care and training of horses; the weapons which horsemen carry such as the bow, the sword and the lance; the assembling of troops and the formation of battle lines. 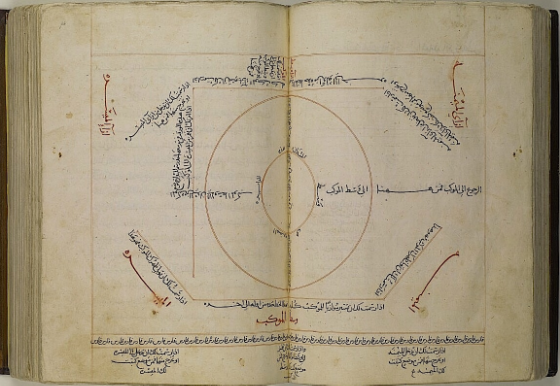 This early dated manuscript from the Mamluk period is a veritable treasure in itself containing some of the most magnificent examples of Mamluk manuscript painting. It includes eighteen colour paintings depicting horses, riding equipment, body armour and weapons and twenty-five instructive diagrams on the layout of a parade ground, dressage and various military insignia. Beyond the military and equestrian arts, the paintings in this manuscript are full of details relating to contemporary costume and decorative style. It is one of the highlights of the British Library’s illustrated Arabic manuscripts and is notable also for its beautiful calligraphy and tooled leather Islamic binding that is likely to be contemporary with the manuscript. 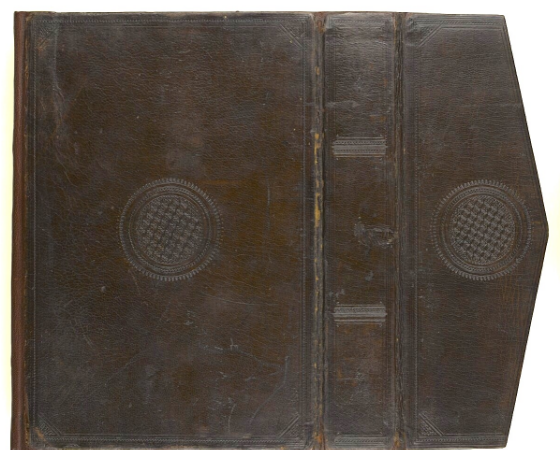 Below is a list of the manuscript’s eighteen paintings. For most of them the author provided his own captions which are given below. Please click on the hyperlinks to see the full images: 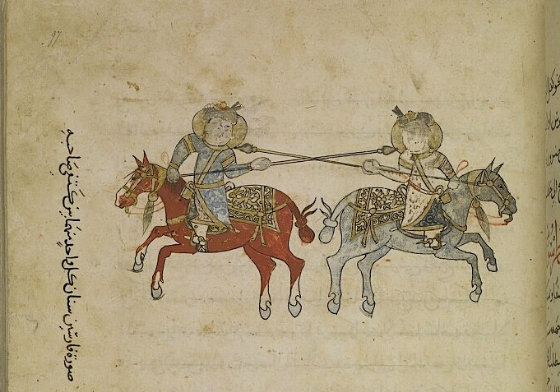 (f. 97r) ‘Illustration of two horsemen whose lance-heads are between each other's shoulder-blades’.

(f. 99r) ‘Illustration of a number of horsemen taking part in a contest, their lances on their shoulders’.

(f. 101r) ‘Illustration of a horseman taking part in a game with a lance, the lance-head being in his hand and its shaft to his rear’.

(f. 113r) Without caption; a horseman impales a bear with his lance.

(f. 121r) ‘Illustration of a horseman performing a sword exercise’.

(f. 122v) ‘Illustration of a horseman with a sword in his hand and his sleeve wound over his hand as he rises out of his saddle and strikes with the sword’.

(f. 125r) ‘Illustration of a horseman with a sword in his hand with which he strikes from the horse's ear as far back as its right croup'.

(f. 127v) 'Illustration of a horseman with the edge of the sword under his right armpit, the hilt in his left with the reins'.

(f. 129v) 'Illustration of a horseman with a small shield around his neck and a sword in his hand which he brandishes to left and right'.

(f. 130r) 'Illustration of a horseman with a hide shield over his face, the sword edge under his right armpit and the hilt on his left'.

(f. 131v) 'Illustration of a horseman with an iron helmet on his head, with a sword. A fire is lit on the helmet, the sword blade and in the middle of the shield'.

(f. 134r) 'Illustration of a horseman with a sword in his left hand and its tip under his left arm pit'. 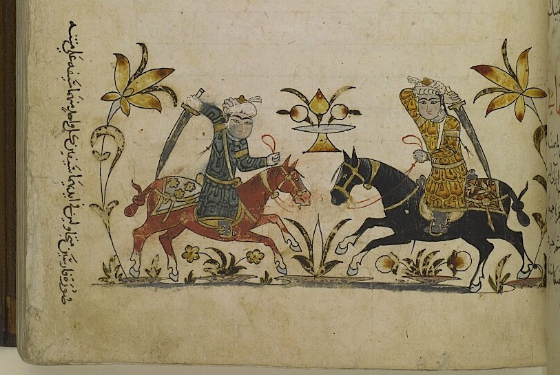 (f. 135r) 'Illustration of two horsemen wheeling around, with a sword in each one's hand on the horse's back'.

(f. 136r) 'Illustration of a horseman with two swords and two small hide shields, on up at his face and the other in his hand with the sword'.

(f. 138v) 'Illustration of a horseman with a lance in his hand which he is dragging behind him, and a shield in his other hand'. 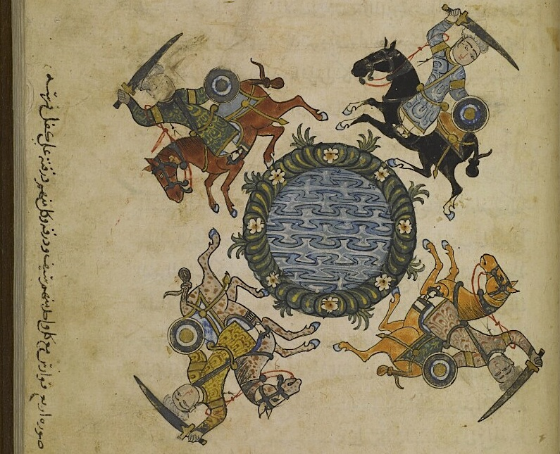 (f. 140r) 'Illustration of four horsemen, each one with a sword and a hide shield, and each one carrying his shield on his horse's croup'.

Article on furūsīyah and the farasnāmah in Persian: Iraj Afshar, Faras-nāma, in Encyclopaedia Iranica Online.

Thanks to the efforts of our colleagues Daniel Lowe and Annabel Gallop, we have identified the seal on folio 292r as that of the Ottoman Sultan Bayazid II (reigned 1481-1512), providing another missing link in the history of this remarkable manuscript.

A useful explanation of the components of Bayazid's tughra (and other Ottoman Sultans) can be found here. 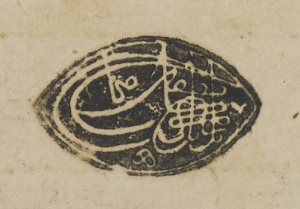