Happy Chinese New Year! The Year of the Goat

This year the Chinese New Year will be celebrated on the night between the 18th and the 19th of February, when the year of the Horse will end and a new year of the Goat will begin.

The celebrations for the Chinese New Year (年节nian jie), also called Spring Festival (春节 chun jie), mark the beginning of a new year in the traditional Chinese lunisolar calendar. Even though the traditional calendar is now not officially used in China, it is still essential to determine the Chinese festivities. The Chinese New Year Festival is the most important event of the year for the Chinese communities and its occurrence determines also the date of other important events related to the lunisolar calendar, such as the Lantern Festival (元宵节 yuan xiao jie), the Dragon Boat Festival (端午节 duan wu jie) or the Mid-Autumn Festival (中秋节zhong qiu jie). Furthermore, the traditional calendar is widely used to determine the best date for some special occasions in people’s life, such as marriages. The traditional Chinese calendar is called农历 nong li (in traditional characters 農曆, which can be translated as “rural calendar” as nong means agriculture) or 阴历 yin li (in traditional characters 陰曆, where yin represents the moon, as opposed to the official solar calendar which is called 阳历 yang li). 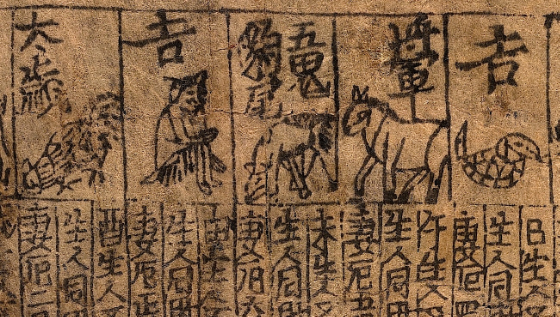 Detail from a printed almanac from Dunhuang dating from AD 877. From right to left, the figures of a snake, a horse, a goat, a monkey and a cock are visible (BL Stein Collection Or.8210/P.6) International Dunhuang Project website

Every year of the lunisolar calendar is traditionally associated with one of the twelve animals of the Chinese zodiac, which are called 生肖 (sheng xiao). These animals are: Rat, Ox, Tiger, Rabbit, Dragon, Snake, Horse, Goat, Monkey, Rooster, Dog and Pig. Each of them is associated to a natural element (Wood, Fire, Metal or Water) and, as in Western astrology, it is believed that people born under a different zodiac sign have different personality characteristics. The year when a person is born is called in Chinese their 本命年 (ben ming nian), meaning “the year of destiny’s roots”. People born during the year of the Goat (so, for example, in 1955, 1967, 1979 and 1991) are said to be peaceful, polite, helpful and trustworthy. 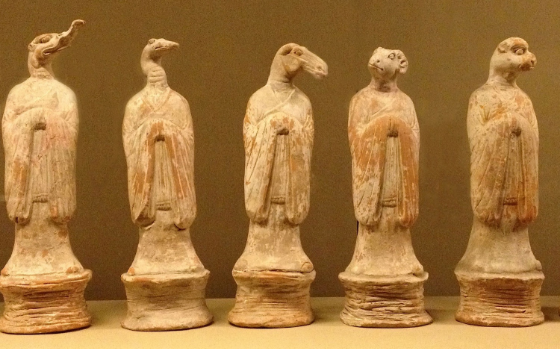 Five of a set of the twelve zodiac animals dating from the Tang dynasty (618–907), depicting (left to right) dragon, snake, horse, goat, and monkey. Shaanxi History Museum, Xi'an © U. Sims-Williams 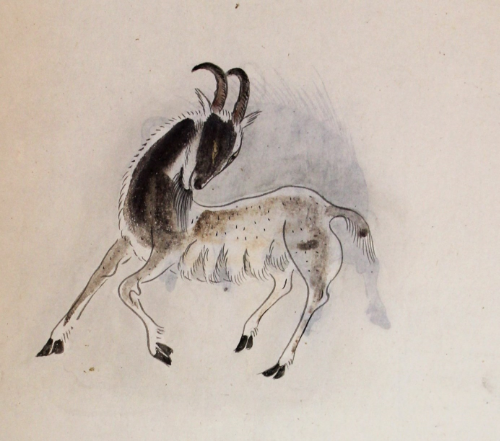 The Chinese New Year is celebrated not only in Mainland China, Hong Kong and Taiwan, but in other countries where the Chinese population is significant, such as Singapore, Indonesia, Malaysia, Philippines and the Chinatowns across the world. Furthermore, the traditional Chinese calendar and the related zodiac animals can be found in literature and art productions of countries which have been influenced by the Chinese traditional culture, such as Japan, Korea, Mongolia and Thailand.

Mongolia
In Mongolia, for example, the 12 animals of the zodiac are called Арван хоёр жил which means “12 years”. The Mongolian calendar is slightly different from the Chinese one and therefore sometimes New Year's day falls on a different date. 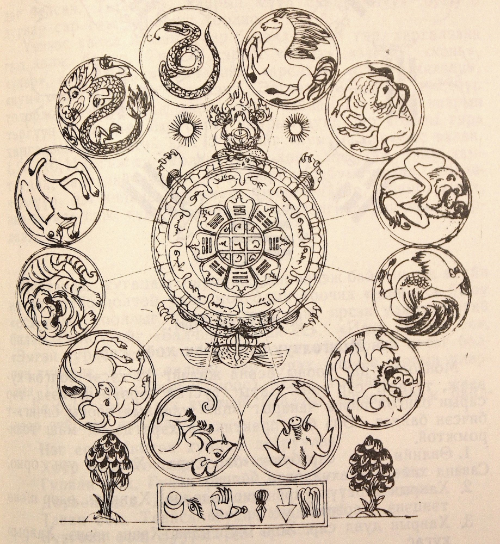 
Japan
In Japan, the Chinese calendar was introduced in the 6th century and it was officially used in some variations until 1873, when the Gregorian solar calendar was formally adopted. In the Japanese collections at the British Library, we find a variety of representations of the animals of the Chinese zodiac, sometimes depicted in form of Gods, warriors or spiritual entities. The first woodblock-printed item below, for example, shows the Twelve Heavenly Generals of the Buddhist tradition (called十二神将, pronounced Jūni Shinshō in Japanese and Shi er shen jiang in Chinese). Each of them is associated with one of the twelve animals of the zodiac. 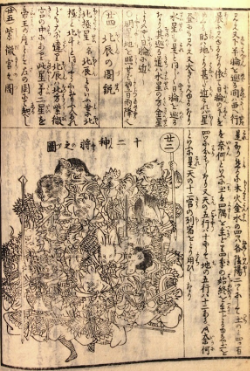 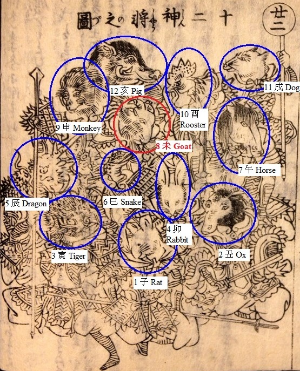 Left: “Great miscellany of calendrical and practical knowledge” (Eitai daizassho banreki taisei  永代大雑書萬暦大成), 1856 reprint. Woodblock printed. Right: the same image has been modified to highlight the position of every animal (BL 16000.a.8) 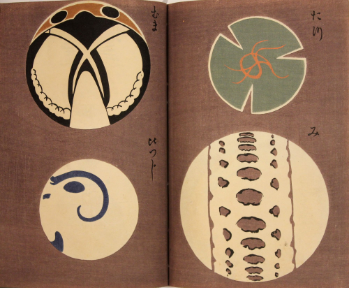 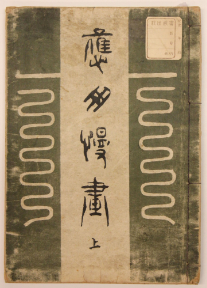 Some illustrations (left) and cover page (right) of a practical design book (Ōyō manga 応用漫画), illustrated by Ogino, 1903. The goat’s stylised shape is visible on the bottom of the left page (BL ORB.30/6167) 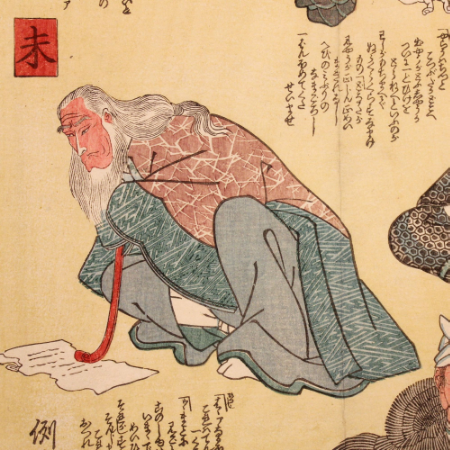 Thailand
The British Library holds a magnificent manuscript from Thailand dated 1885 (Or.13650). It contains a series of drawings based on the Chinese Zodiac and its animals. A male or female avatar, a plant and a number are associated to every zodiacal sign. This manuscript has been fully digitised and can be seen here. 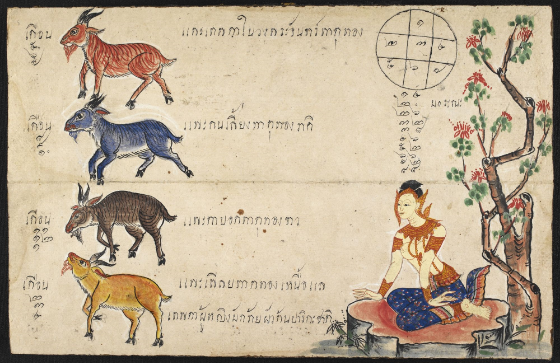 Illustrations of omens for events that could happen on a certain date within the year of the goat. In the upper left corner the female avatar for the year is riding a goat. Only a ritual specialist (หมอดู) would have been able to interpret these omens and to give advice on how to avoid unfortunate or dangerous events (BL Or.13650, f.20v)

Central Asia
A unique 9th century document from Khotan, (present-day Xinjiang Uyghur Autonomous Region, China) written in the middle-Iranian language Khotanese,  is called “The twelve year leaders and their influences”, and lists the animals in the 12 year cycle with predictions for people born in that year. A man born in the year of the Sheep (or Goat) “will be blessed, meritorious. He will be blessed in everything, in crop and money”. However, it is not all good news! The description continues: “He will be sickly and short-lived. There will be bad illnesses upon him. And a lot of itching will arise for him as well as a wound. If his wives [become] pregnant, they will die. And whatever sons they bear will be short-lived”[1].

Predictions in Khotanese for the man born in the year of the Goat, dating from the early 9th century. Document from Khotan (present-day Xinjiang Uyghur Autonomous Region, China) (BL Or.11252/1, lines 38-41)  International Dunhuang Project website

It is worth mentioning that the character 羊 (yang) in Chinese is associated with various animals which belong to the Bovidae family and it therefore can be translated as goat, but also as sheep or even antelope. This is why in English, when referring to the Chinese zodiac sign 羊, “goat” and “sheep” are both widely used as translations.

We hope that the images in this article will be inspiring and auspicious to all our blog readers and we wish you a wonderful New Year of the  羊!