The world of scholarship has been revolutionised by numerous digitisation programmes undertaken in libraries throughout the world. Now, instead of having to travel thousands of miles for expensive and extensive visits to cities where unique historical sources are housed, it is ever more possible to make a detailed study of a manuscript from one’s own home, in any country, via the internet. Digitisation programmes are usually shaped both by the interests of patrons and the strengths of an institution’s collections, and among the exciting projects to digitise material from the Asian and African collections of the British Library are those of Malay manuscripts in collaboration with the National Library of Singapore supported by William and Judith Bollinger, Thai manuscripts funded by the Royal Thai government, Persian manuscripts in partnership with the Iran Heritage Foundation, and Hebrew manuscripts with the Polonsky Foundation. However, with the emphasis on large projects, it is not always easy to prioritise the digitisation of other important manuscripts from smaller language groups, or from regions for which funding proves difficult to source.

The Southeast Asia section of the British Library is fortunate in that a legacy from the estate of the late Henry D. Ginsburg (1940-2007), who was for over thirty years the Library’s curator for Thai, Lao and Cambodian collections, has enabled the digitisation of a small number of significant manuscripts, some representing writing traditions rarely accessible on the internet. In 2013, seven of the most important illuminated and illustrated manuscripts in Vietnamese, Burmese and Javanese were digitised. In 2014 we completed the digitisation of a further 15 manuscripts from Southeast Asia, in Vietnamese, Burmese, Shan, Khamti, Lao, Thai, Bugis, Javanese and Arabic, which this month have been made accessible through the Digitised Manuscripts website.

Artistically, the highlights are probably six Burmese folding book (parabaik) manuscripts, all lavishly and exquisitely illustrated. Three of the manuscripts depict scenes from the Life of the Buddha (Or. 4762, Or. 5757 and Or. 14197) while the other three contain Jataka stories (Or. 13538, Or. 4542A and Or. 4542B, and MSS Burmese 202).

The Jātaka stories about the previous lives of the Gautama Buddha are preserved in all branches of Buddhism. These stories show how he gradually acquired greater strength and moral stature as his soul passed from one incarnation to the other. Shown above is a scene from the Latukika Jataka. The Bodhisatta, the leader of the elephants (gilded) protects the offspring of a quail who had laid her eggs in the feeding ground of the elephants. British Library, Or. 13538, ff. 20-22.

Also in folding book format is a lavishly decorated Buddhist manuscript, Buddhānussati, in Shan language (Or. 12040), a copy of Tamrā phichai songkhrām in Thai language (Or. 15760), and a rare Lao dictionary in three volumes from the 19th century (Add. 11624).

This Shan folding book (pap tup), dated 1885, with the title Buddhānussati contains a text on recollections of the Buddha, explaining mindfulness with the Buddha’s virtues as objects. The embossed gilded covers are studded with multi-coloured mirror glass for ornate floral decoration. British Library, Or.12040, front cover. 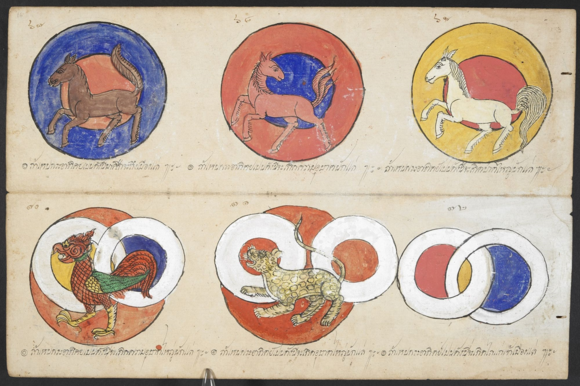 Folio 16 of the Tamrā phichai songkhrām, explaining various appearances of sun and how to interpret them. This Thai divination manual for the prediction of wars, conflicts and natural disasters also contains explanations of the shapes of clouds, the moon and planets. British Library, Or.15760, folio 16.

Another rarity that has been digitised in this project is a bound and scrolled paper book (pap kin) in Khamti Shan script, Kuasala Ainmakan (Or. 3494). The book, dated 1860, is sewn in a blue cotton wrapper with a white and pink braided cotton string. It contains the Mahāsupina Jātaka about the dreams of King Pasenadi, the King of Kosala.

From the Vietnamese collection was selected ‘The Northwards Embassy by land and water’, a rare pictorial manuscript map, Bắc Sứ Thủy Lục Địa Đô (Or. 14907), illustrating the journey from Hanoi to Beijing in 1880. This manuscript is currently on display in the exhibition ‘Geo/Graphic: celebrating maps and their stories’, at the National Library of Singapore (16 January – 19 July 2015). 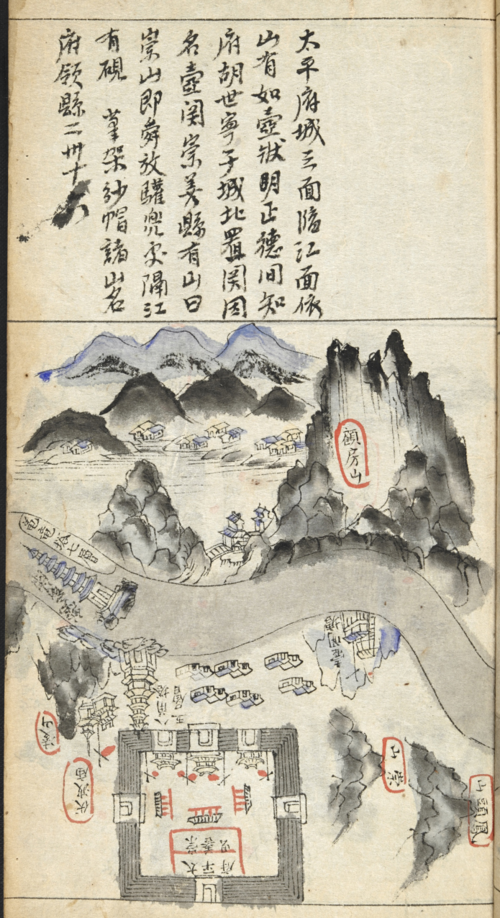 Tai Ping City , located by Gu Fang Mountain. The city was well fortified with a fortress and could be dated back to the Ming dynasty.British Library, Or. 14907, f. 11r.

Two very different Javanese manuscripts were digitised. The first, Serat Jaya Lengkara Wulang (MSS Jav 24), contains ethical teachings of the royal house of Yogyakarta, with many fine examples of illumination. The other manuscript (Sloane 2645) is a work on Islamic law, Mukhtasar Ba Fadl or Muqaddimat al-Hadrami, here going under the title Masa'il al-ta'lim, written in Arabic with interlinear translation and marginal commentary in Javanese in Arabic (Pegon) script. The manuscript, which is dated 1623, is from the founding collections of Sir Hans Sloane, and may be one of the earliest dated examples of a Javanese manuscript in Pegon script, and written on Javanese paper dluwang) made from the bark of the mulberry tree. 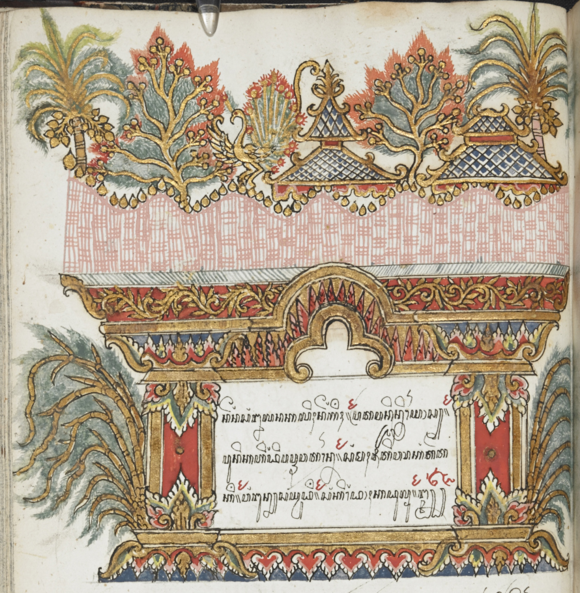 The final manuscript, also from Indonesia, is in the Bugis language and script (Add. 12354). This is the personal diary of Sultan Ahmad al-Salih Syamsuddin of Bone, in south Sulawesi, covering the years 1775-1795, and written in his own hand. The diary contains a wealth of detail on the social, political, economic and cultural life of Sulawesi in the late 18th century.

Posted by Annabel Gallop at 1:11 AM