The beauty of palm leaf manuscripts (3): storage and preservation

In my two previous posts on this topic, I looked at palm leaf manuscripts from central Thailand and the northern Thai regions. In this final post on the beauty of palm leaf manuscripts in Tai manuscript cultures, I will take a closer look at traditional retrieval aids, and storage and preservation methods. Some temple libraries held large numbers of manuscripts which were stored in specially made furniture. Due to the fact that many manuscripts were wrapped in a piece of cloth, and the title or contents were rarely mentioned on the front leaf or front cover of a manuscript, quick retrieval of a particular manuscript was only possible if certain finding aids and methods were in place. For example, the manuscripts could be arranged in a systematic order within one cabinet, and several cabinets could be placed in a systematic order in the library building. One important finding aid was the title indicator. A title indicator, which could constitute a beautiful little work of art itself, was attached to a rope, and the rope was wound around the manuscript.

Title indicators made from wood or bamboo were important means of identifying manuscripts when these were stored together in large numbers in wooden cabinets. The length of a title indicator could range from 100 to 400 mm. Bamboo and wooden indicators were often simple strips with the title and list of contents of the manuscript incised or written on, but sometimes wooden and ivory indicators could be carved with beautiful floral ornaments. Often they were lacquered red or black and decorated with gold leaf before the text was incised.

Manuscript racks were used to hold manuscripts that had been selected to be worked with, for example to be read or discussed during Buddhist ceremonies and other events, or to be studied by an individual monk, or a monk with novices. These wooden stands can be decorated with intricate carvings, lacquer and/or gold leaf. 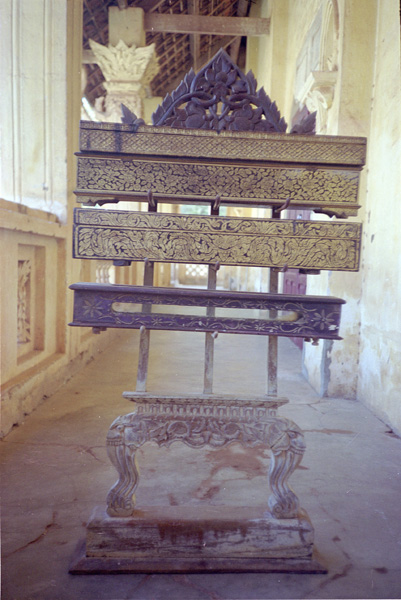 Wooden manuscript cases that were custom-made for a particular palm leaf manuscript were often decorated in the same technique and design as the manuscript covers. These decorations included floral designs, animals or mythological figures, or lattice patterns. Gold leaf on black or red lacquer was one popular technique in the Northern Thai/Lanna, Lao and Shan traditions.

Wooden case with Kammavācā palm leaf manuscript in Tham script inside. The decoration of the manuscript covers is repeated on the case. Lanna or Laos, 19th century. British Library, Or.16893. Photograph courtesy of Michael Backman. © Michael Backmann Ltd.

However, most palm leaf manuscripts were not equipped with their own case but were stored in a larger casket, either a chest with a lid or a cabinet with lockable doors. Thick layers of lacquer helped to prevent damage to the chests and cabinets by the humid climate and insects. Long legs on the cabinets, and pedestals to stand the chests on, served to protect the manuscripts from flooding. 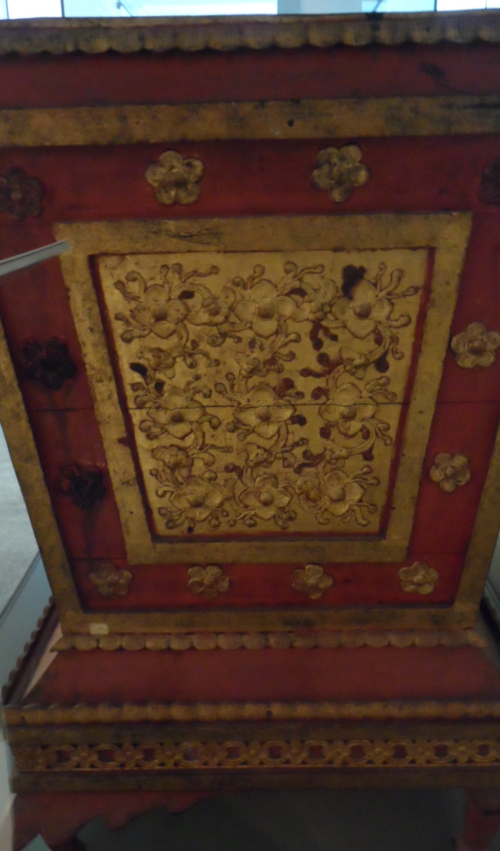 Whereas in southern Laos the lai rot nam technique enjoyed great popularity, in northern Laos and Lanna the gold-on-lacquer stencil painting technique was more widespread. This technique, which was also used by the Shan, Tai Khoen and and Tai Lue, involved creating designs on paper which were cut into stencils afterwards. The paper stencil was then placed over a pre-lacquered surface and gold leaf was applied. The gold leaf easily adhered to the pre-lacquered surface (Warren 2004, p. 109). However, both techniques could be combined.

Large chests and cabinets were produced for the storage of manuscripts in Buddhist temple libraries (hǭ tai) or in royal and local palaces. The largest cabinets could be over 2 metres high and were designed to house an extensive collection of manuscripts belonging to the Tipitaka. Accordingly they were called tū traipitok. They were often lavishly decorated with scenes from the Jātakas, mythological animals in the Himavanta heaven, and floral designs (Kō̜ngkǣo 1980-88).

Regular communal ceremonies called bun bai lān were - and still are - organised to preserve the palm leaf manuscripts that are stored at Buddhist libraries, which are valuable treasures of the local communities (see DLLM). At such ceremonies, which can take place annually or once every several years, the palm leaf manuscripts are removed from the storage furniture, cleaned from dust, dead insects and dry mould by wiping them with a clean, soft piece of cotton or a brush made from soft animal hair on a bamboo stick. The furniture is cleaned as well on this occasion. The cleaning tasks are carried out by lay volunteers and novice monks. 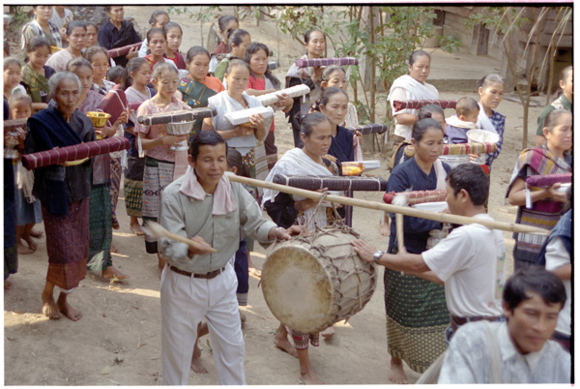 Damaged manuscripts can be repaired or copied onto new palm leaves by trained monks and novices, and broken covers, title indicators or torn wrappers can be replaced with new ones. At the end of this work which may be carried out over several days, monks would usually bless the manuscripts and thank the members of the community in a ceremony. Afterwards, the members of the community, novices and monks help to carry the manuscripts back to the temple library in a colourful procession. 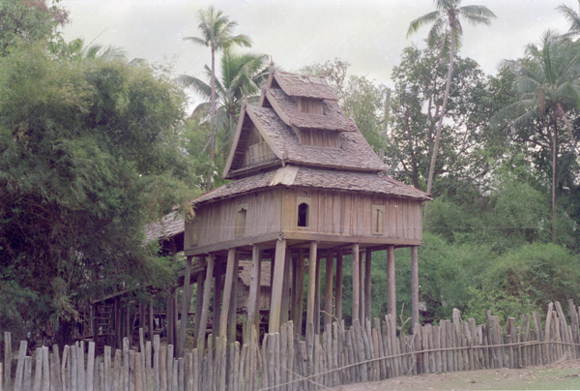 Traditional manuscript repositories (hǭ tai) could be found in Buddhist temples, where special buildings were erected on high base walls, stilts or pillars in order to keep the manuscripts safe from leaf-eating animals and floods.

Posted by Annabel Gallop at 2:21 AM