Shaikh ‘Inayatallah Kanbu of Delhi finished his romantic tale the Bahar-i Danish (‘The Springtime of Knowledge’) in 1651, a collection of Indian tales held together by the frame story of the romance of Jahandar Sultan and Bahravar Banu.  No early illustrated copy seems to have survived.   A previously unknown manuscript of the text illustrated with 118 miniatures appeared recently at auction from the collection of the Duke of Northumberland (Sotheby’s, London, 8 October 2014, lot 275).  Although undated, this manuscript goes some way to fill the gap in Mughal manuscript illustration between the end of the reign of Shah Jahan (r. 1628-58) and the revival of the imperial Mughal studio in the 18th century.  The present writer was able to study it closely and concluded that the text was copied around 1700, that there were three illustrative campaigns, the first two of which were contemporary with the writing, but that the third campaign was undertaken later, almost certainly in the 1720s in the imperial studio of Muhammad Shah (r. 1719-48).  The illustrations in this third campaign seem preparatory to the paintings by Govardhan II in the Karnama-i ‘Ishq, the finest known imperial manuscript from the 18th century (BL J. 38, see Losty and Roy 2012, figs. 138-45).

There are very few good quality Mughal manuscripts from the latter half of the 17th century with which this manuscript could be compared.  Shah Jahan was interested in manuscript illustration only for inclusion in his chronicles, while under the puritanical Aurangzeb (r. 1658-1707) painting was discouraged along with all the other arts of the court.  Artists must have sought other employment in this period whether with princes and noblemen or else in a more commercial environment.   In searching for other illustrated manuscripts of this text, an unexpected find was a hitherto ignored but important Mughal illustrated manuscript with 126 miniatures in the India Office collections in the British Library (numbered IO Islamic 1408, Ethé 1903, no. 806), the subject of the present note.  Although inscribed as a Johnson manuscript and hence collected by Richard Johnson in India before his return to England in 1790, it is not certain that the inscription is correct.  However, a note in an old hand mentions Alexander Dow’s partial translation (published 1768) but not Jonathan Scott’s complete one of 1799, suggesting that the manuscript was already in a contemporary collection.  Even more interesting was the discovery that it is another version of the Northumberland manuscript.  Its miniatures are also divided into three distinct campaigns to be discussed below and have the same compositions and colouring, except that the third campaign in the ‘Johnson’ manuscript is a continuation of the style of the first campaign.

As two of the earliest if not the earliest illustrated versions of this text, these manuscripts, by far the finest known illustrated versions, assume a particular importance. Their style is derived from the 17th century Mughal style, as they are copying the Shahjahani style albeit in a simplified manner.  This comes through particularly in the costume details in the three illustrative campaigns, which all show the jama (gown) at mid-calf length in vogue in the mid-17th century.  Both of the manuscripts must be based on a no longer known exemplar from the 17th century, perhaps the first illustrated version done under the author’s supervision.  Indeed the Northumberland manuscript refers to a lacuna in its exemplar (f. 101) which in the Johnson manuscript is filled with a painting, so that there can be no question of one being copied from the other.  In the third campaign in the ‘Johnson’ manuscript there are several preliminary drawings and unfinished paintings, suggesting that the different paths taken in the third campaigns are because the original exemplar was unfinished. 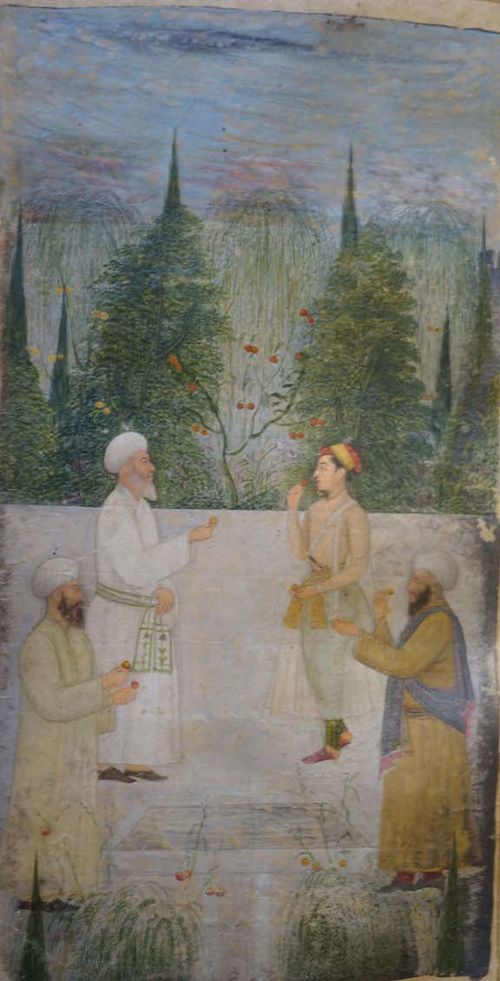 The Emperor of Hindustan supplicating the pure-minded for a son, which bore fruit eventually in Jahandar Sultan.  Mughal, 1700-20.  BL IO Islamic 1408, f. 10

The ‘Johnson’ manuscript’s illustrations were begun around 1700 perhaps in the studio of an unnamed Mughal prince or nobleman but more likely, since we are dealing with two manuscripts fundamentally the same, in a commercial manuscript studio in Delhi.  Several artists were involved in each of the three campaigns.  All share certain traits common to later 17th century Mughal painting, including the treatment of the sky with coloured horizontal streaks (cf. Losty and Roy 2012, figs. 99, 100), while some of the paintings show the rolling coloured clouds more common at the beginning of the 18th century (ibid., fig. 123)  There is a certain naiveté and stiffness about the paintings of the initial campaign, which continues until f. 104v.  Figures are generally neat and on the small side; there is minimal amount of landscape and architecture, just enough to place the figures. As often happens with illustrated manuscripts, the opening miniatures done by the studio master (as here) are somewhat more elaborate and better finished than those later on in this same first campaign where more of the other artists’ work becomes apparent.

Another campaign carried on the illustrations in a different and more lightly coloured style that in some of the paintings favours a great deal of impressionistic brushwork.  The figures are larger and more detailed.  This section is in many ways the most interesting of the three campaigns. 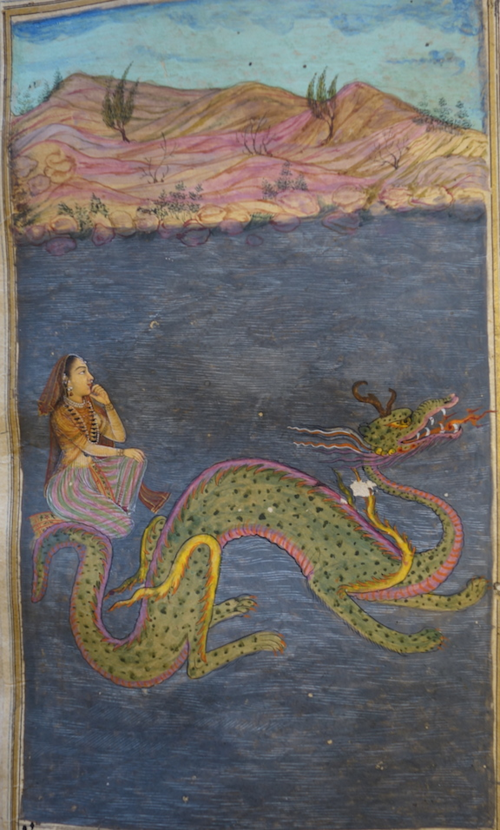 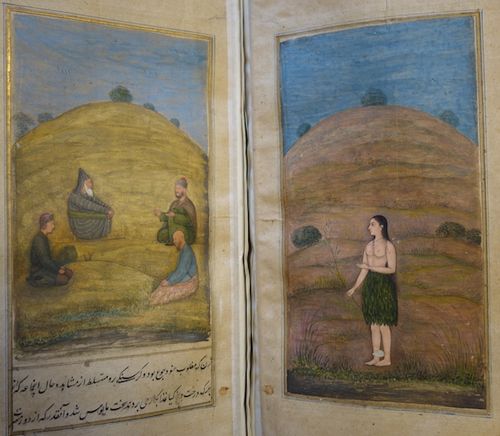 The merchant’s daughter after further misadventures lands up on a desert shore, where the only inhabitants spend their lives in contemplation of God.  Through their kindness she is instantly transmitted back to her father’s house.  Mughal, 1700-20.  BL IO Islamic 1408, ff. 120v, 121

Assuming these are versions of original 17th century manuscript illustrations, that artist must have been exposed to the work of such artists as Payag and Govardhan with their on occasion experimental techniques. 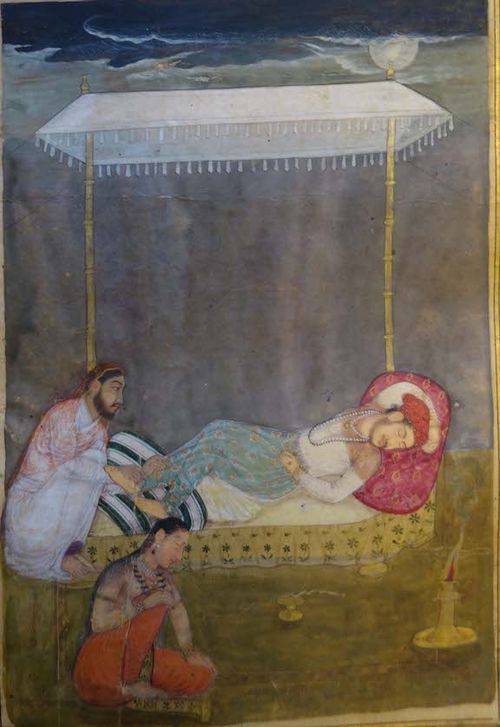 A servant girl has fallen asleep while massaging the feet of a sleeping king, whereupon a thief carries on the massage until the king turns over and the thief can steal the jewel-encrusted fish from beneath his pillow.  Mughal, 1700-20.  BL IO Islamic 1408, f. 136

The delicate handling of the paint and the rather beautiful modelling here show the artist to be influenced by his model in more than just the composition. 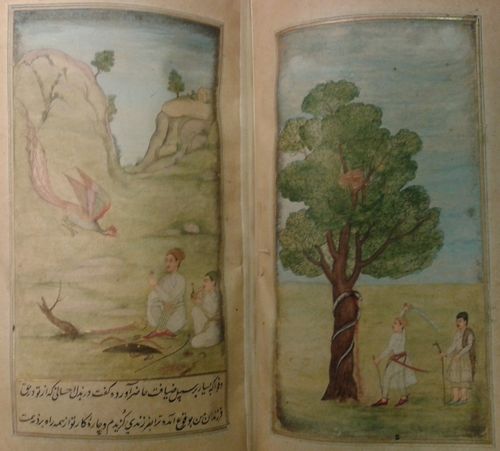 The wandering prince Farrukh Fal slashes at the cobra that is climbing the tree to attack the simurgh’s young, watched by his friend the vizier’s son, while after their encounter with the cobra, they are thanked by the simurgh for saving her young.  Mughal, 1700-20.  BL IO Islamic 1408, ff. 257v, 258.

The soft green landscapes studded with little trees and occasionally hillocks and rocky ridges derive from Shahjahani landscapes (cf. Losty and Roy 2012, fig.63, also the seated prince) but are akin to the sort of landscapes that are found in Mughal imperial painting in the reigns of Bahadur Shah (1705-12) and Farrukhsiyyar (1713-19).  This second campaign continues until f. 216.

The third campaign is in many ways a continuation of the first campaign, but there are several gaps in the sequence of paintings, where the scribe and marginator have allowed panels for paintings but these have been left blank, while in other instances there are just outline drawings or colours only partially applied.  Given that the Northumberland manuscript for this campaign has a sequence of later images from the 1720s, it would seem that here the original exemplar was left unfinished in part and the artists of our manuscript were left to their own devices.  Many of the paintings in this sequence are in consequence nicely finished but rather dull and repetitive.  But as in the case of the Northumberland manuscript, when the text has finished with the various tales and returned to the frame story of Jahandar Sultan and Bahravar Banu, there were some finished paintings in the exemplar to draw upon. 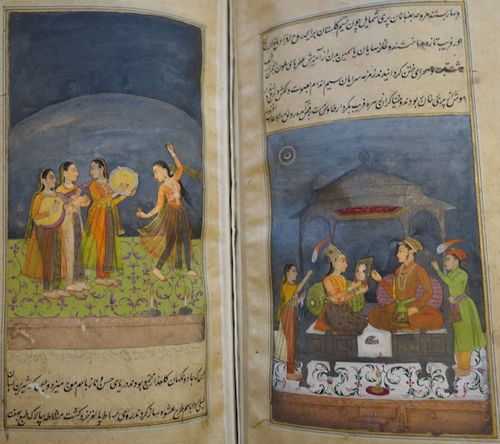 Prince Jahandar and Princess Bahravar Banu seated on a throne with a mirror as they are married, while dancers celebrate the happy occasion.  Mughal, 1700-20.  BL IO Islamic 1408, ff. 333v, 334

When Jahandar Shah and his beloved queen die, they are carried on biers to their final resting place, but the text mentions only the one son. The final double-page painting shows an obvious debt to Shahjahani painting in having three sons riding in procession surrounded by their noblemen. 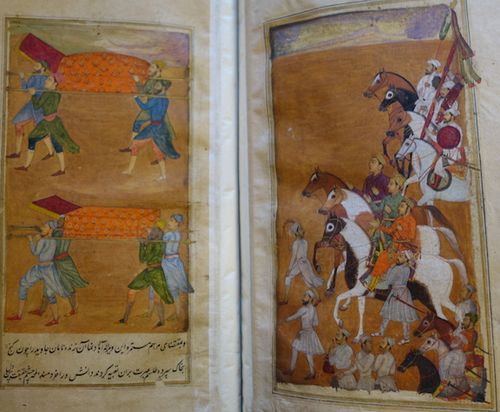 Here the original 17th century artist is paying homage to the paintings by Murar of Dara Shikoh and two of his brothers riding in Dara Shikoh’s wedding procession in the Padshahnama (Beach, Koch and Thackston 1997, pl. 27) and by Balchand of the three younger sons on horseback facing their father and elder brother in the Minto Album (Stronge 2002, pl. 117).

So it is still possible to find unknown artistic treasures in even the most well-known and open collections.  Who knows what other finds may still be made?

Ethé, Hermann, Catalogue of the Persian Manuscripts in the India Office Library, Oxford, 1903

‘Inayatallah, Shaykh, Bahar-Danush; or Garden Of Knowledge: an Oriental Romance translated from the Persian of Einaiut Oollah. By Jonathan Scott, Shrewsbury, 1799