In 1783, the Al Khalifa family – originally from the Nejd region of what is now Saudi Arabia – captured the islands of Bahrain from Shaikh Nasr Al Madhkur, who had ruled them on behalf of the Qajar dynasty of Persia. In 1926, over one hundred and fifty years later, the status of Bahrain’s sovereignty remained a contentious issue. In December of that year, G. R. Warner, a British diplomat in London, wrote to a colleague in India stating that ‘on political grounds it is of great importance to avoid any action which would result in the re-awakening of the controversy as to the sovereignty of Bahrein’.

Although Bahrain was nominally independent at this time, it was a British-protected state and Britain had controlled its foreign relations since the nineteenth century. The cause of Warner’s concern was the fact that the Persian Government refused to recognise Bahrain’s independence and instead claimed it as a province of Persia. The manner in which British officials in the region responded to this tension provides a revealing insight into the character of Britain’s role in Bahrain at this time. 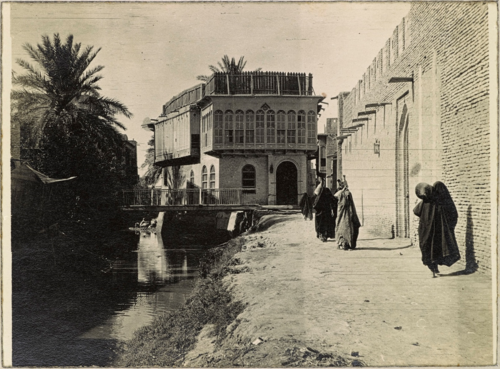 Avoiding Re-Awakening the Controversy
Throughout the 1920s and 1930s, Bahraini nationals resident in the city of Mohammerah (Khorramshahr) in Persia were subjected to harassment and intimidation by the local authorities. Many of these Bahrainis – the majority of whom were Baharna (the indigenous Shia Arab community of Bahrain) – were being forced to adopt Persian nationality. If they did not comply, the Baharna faced arrest, expulsion from the country and, in some cases, serious violence and even death. In response, the community appealed for help to the ruler of Bahrain, Shaikh Hamad bin Isa Al Khalifa, and to the various British officials who served as Political Agent in Bahrain during this era. The British – wary of increasing tensions with Persia over Bahrain – were hesitant in their response to the Persian Government’s actions. 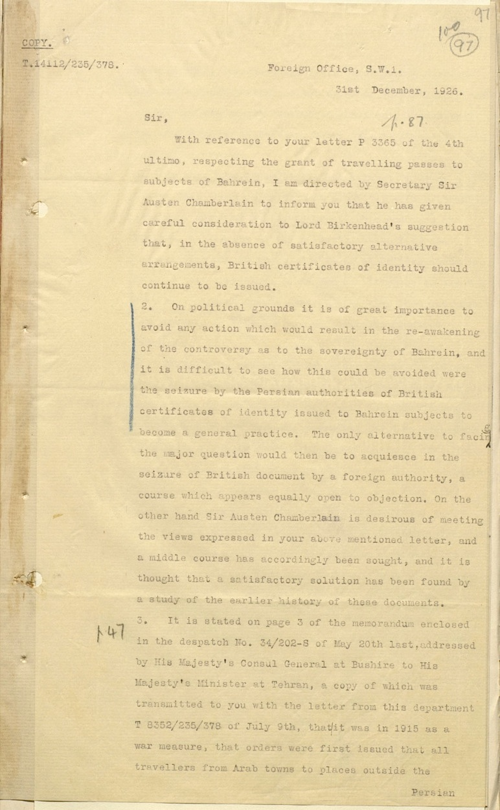 ‘Alleviating the lot of the Baharnah’
Despite their repeated petitions calling for assistance, the harassment of Bahraini nationals in Persia continued and Britain’s inability or unwillingness to offer more substantial help to citizens of a country ostensibly under its protection began to cause some consternation amongst the Baharna.

In 1923, the British had forced Bahrain’s ruler, Shaikh Isa bin Ali Al Khalifa, to abdicate and replaced him with his son, Shaikh Hamad bin Isa Al Khalifa. Following this, the Political Agent in Bahrain, Clive Kirkpatrick Daly, enacted a series of wide-reaching reforms in the country. In this context, Cyril Charles Johnson Barrett, the British Political Resident in the Persian Gulf, made a frank observation in a letter to the British Legation in Tehran in August 1929:

[I]t strikes the residents of Bahrain as remarkable that while Britain’s protection of their island runs to dethroning their ruler, carrying out a series of reforms and arranging to establish flying boat and aeroplane bases for herself, it is not of the least value in alleviating the lot of the Baharnah in Persia. 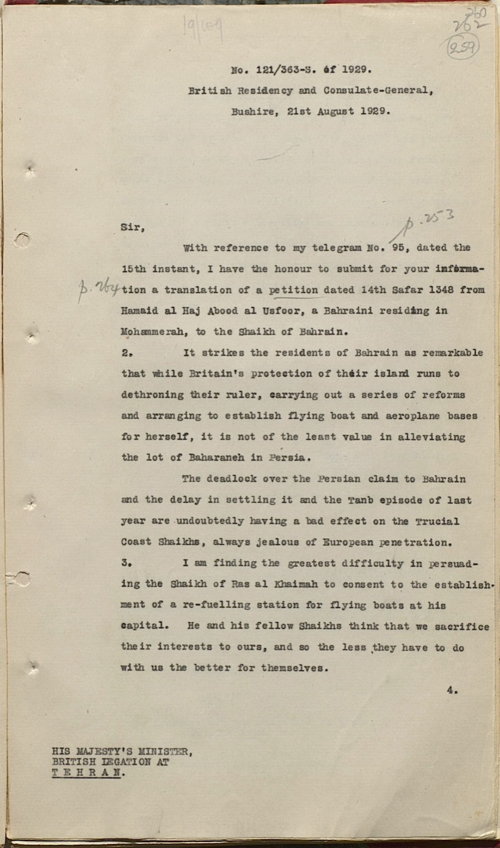 Legal Fiction
In September 1929, Charles Geoffrey Prior, Britain’s Political Agent in Bahrain elaborated on this contradiction. In an extraordinarily frank passage in a letter to Barrett, his superior based in Bushire, Prior described the notion that Bahrain was an independent state as a ‘legal fiction’ and stated that he did not believe that ‘any Arab is deceived for a minute by a policy which, while manipulating the resources of Bahrain in our interests, declines to protect its subjects, to allow them to protect themselves or to ally themselves with other states who might do so’.

Prior suggested that if the British had intervened in any Indian state over the previous decade to the extent they had done so in Bahrain, it would have caused a ‘storm of protest’, observing that:

[W]e have deposed the Ruler, deported his relations, fixed the customs tariff to suit our interests, forced the state against its will to grant a customs rebate to our ally Bin Saud […] deprived the Ruler of jurisdiction over all foreigners, and decided what Europeans he may or may not employ.

Prior went on to state that ‘we have refused the state a free hand with their mineral resources, and have been guided in the matter almost entirely by our own interests’ and pointed out that the ruler of Bahrain was forbidden to correspond with the oil company working on his concession except through the intermediary of the Political Agent. 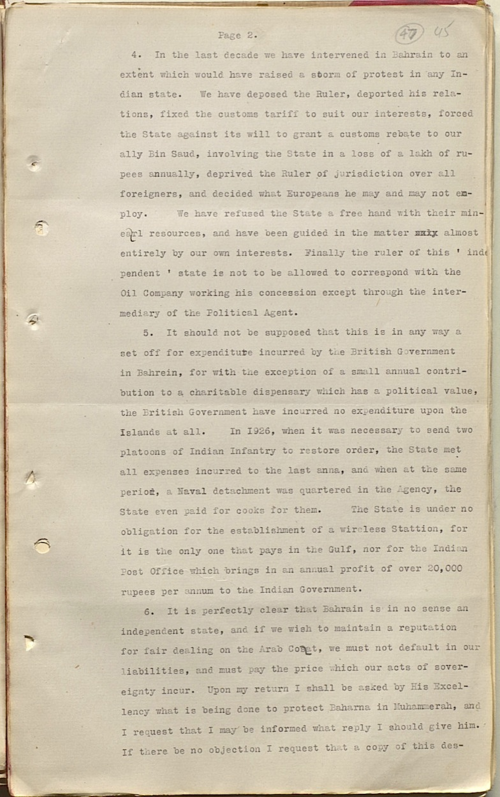 Second page of a letter from Charles Geoffrey Prior, the Political Agent in Bahrain, to Cyril Charles Johnson Barrett, the British Political Resident in the Persian Gulf, 27 September 1929 (IOR/R/15/1/322, f. 47)

Prior also made the astonishing admission that aside from a small contribution to charity, ‘which has political value’, the British Government had incurred no expenditure in Bahrain whatsoever.

Duty to Grant Protection
In this damning assessment of British policy in Bahrain, Prior asserted his belief that Britain should be fulfilling its obligations by doing more to assist the Baharna. Prior argued that ‘in no sense’ was Bahrain an independent state, and for the sake of Britain’s reputation for ‘fair dealing’ it should not default in its liabilities to its inhabitants. This argument was reiterated by Prior in a letter two years later in 1931.

In this letter, Prior outlined the extent of Britain’s involvement and explained how the British manipulated an oil company to suit their ‘Imperial interests’. He argued that since ‘we have interfered in the affairs of Bahrain to an extent unparalleled in British India [then] we should grant these people the same support and protection that we extend to inhabitants of British Indian States’.

Three years later however, the harassment of Bahrainis in Persia had not abated. In 1934, Charles Belgrave, Adviser to the Government of Bahrain, wrote that ‘the Persians destroy their [Bahraini] nationality papers, make them sign Persian papers yet the Baharna would rather die than become Persian subjects’. 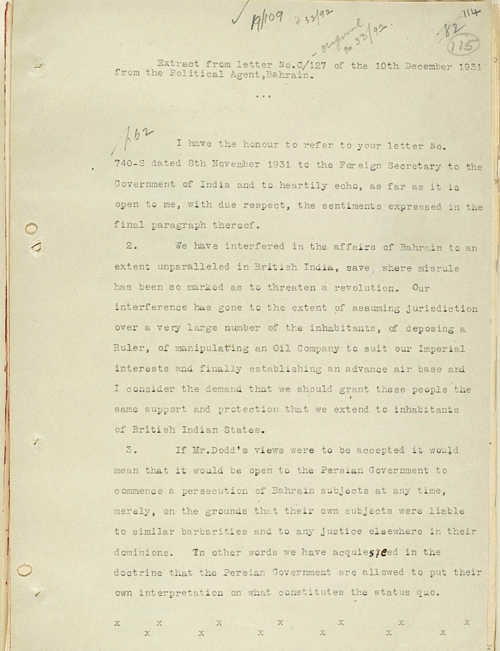 Imperial Context
Prior’s remarkable candour when assessing the British Government’s activities in Bahrain starkly demonstrates the nature of its role in the country, a role that, according to his own account, was motivated by the logic of empire and – in his own words – Britain’s self-interest. The welfare of the country’s citizens was a concern of secondary importance, at best. 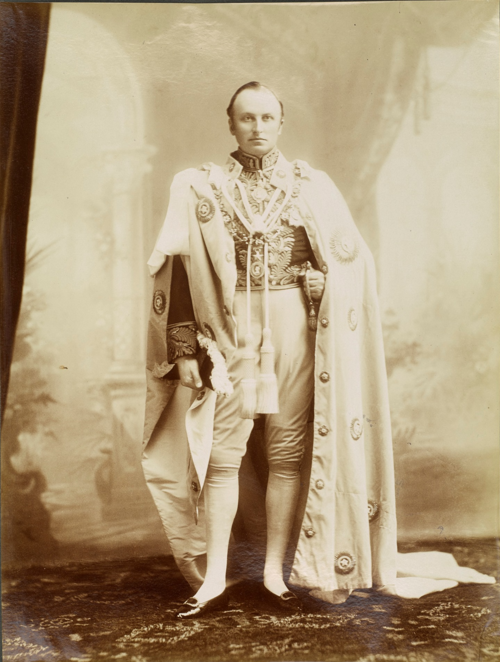 In 1898, George Curzon, then the Viceroy and Governor-General of India, infamously wrote:

Turkestan, Afghanistan, Transcaspia, Persia – to many these names breathe only a sense of utter remoteness or a memory of strange vicissitudes and or moribund romance. To me, I confess, they are pieces on a chessboard upon which is being played out a game for the dominion of the world.

Regardless of Prior’s own personal misgivings, Bahrain was no exception to Curzon’s imperial worldview, it was merely another piece on the ‘chessboard’, a means to safeguard Britain’s position in India and further the interests of its global empire.

Posted by Ursula Sims-Williams at 9:34 AM