Although it may not rank in gastronomic terms with such delicacies as sushi, sashimi or Kobe beef, “curry rice” (karē raisu カレーライス) is one of Japan’s most popular dishes and favourite comfort foods. Arguably it has more in common with the 19th-century versions of curry served on Royal Navy ships than with original Indian cuisine, and the sauce has a thick, viscous consistency.1  Initially a foreign import, it has become an integral part of Japanese food culture and been adapted and developed in a typical example of Wayō setchū 和洋折衷 – the blending of Japanese and Western influences. Curry rice can be eaten in a wide variety of forms, among the most popular being katsu karē (curry with a breaded pork cutlet on top) and karē don  (thickened curry sauce served on top of a bowl of rice). Nowadays in Japan, curry restaurants are found everywhere and a bewildering array of curry sauce mixes and pre-packed curries fill supermarket shelves. 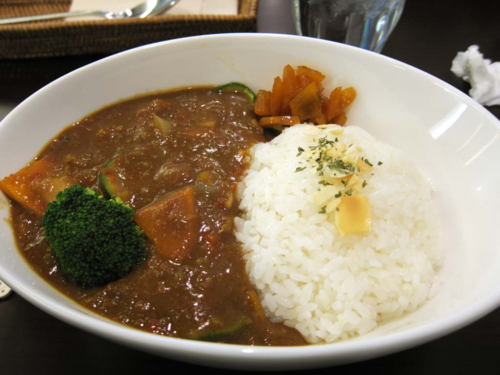 However, curry rice was not always so popular. The British Library’s East Asian Section has recently acquired a copy of Seiyō ryōritsū 西洋料理通  (The Expert on Western Cookery), written by Kanagaki Robun 仮名垣魯文 and published in two volumes by Mankyūkaku 萬笈閣 of Tokyo in 1872.  It is one of the first books on European cooking to be published in Japan and is a milestone in the history of karē raisu.2 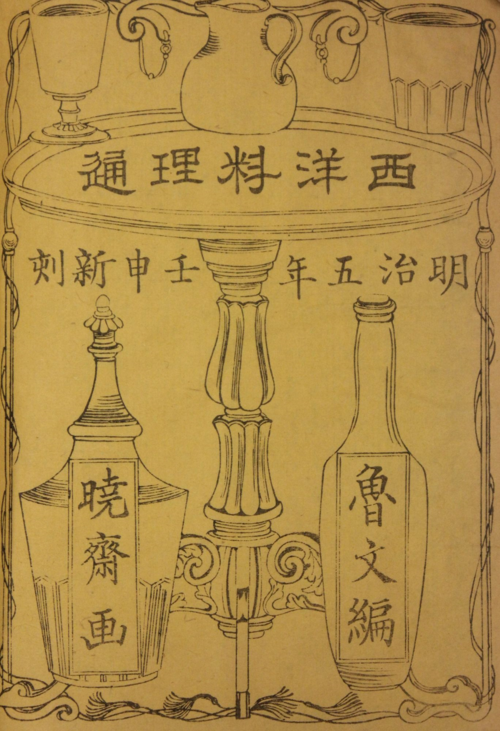 In the years following the arrival of the American Commodore Perry and his squadron of “Black Ships” in 1853, the Japanese government gradually opened the country’s ports to foreign trade, turning its back on its isolationist past and embarking on a systematic introduction of Western culture and thought in a programme of modernisation known as “civilisation and enlightenment” (Bunmei kaika 文明開化). Part of this transformation was a belief that the adoption of Western food – and in particular the consumption of beef – would have a beneficial effect on the health and nutritional standards of the Japanese population. As both Japan’s major religions, Buddhism and Shinto, banned eating the flesh of four-legged animals, the campaign to encourage the eating of beef was controversial – at once a symbol of modernity and an attack on traditional culture. In the words of one writer on the subject, “many Japanese considered beefeaters to be both society's most exemplary members and its most ignoble and degenerate”.3 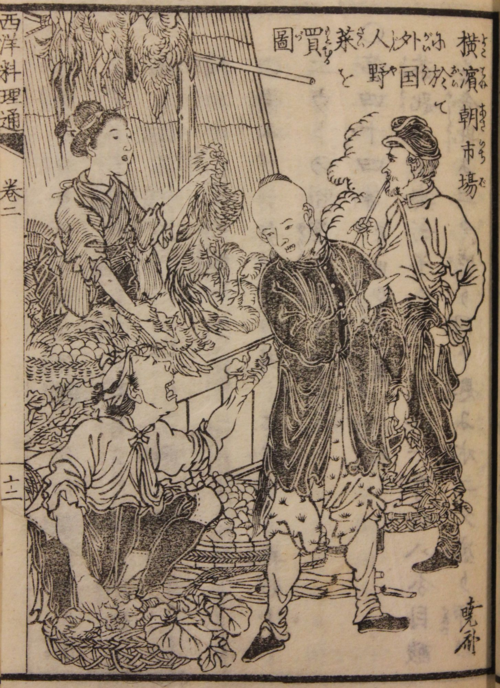 Kanagaki Robun (1829-1894), real name Nozaki Bunzō 野崎文蔵, was an author and journalist whose work often satirised the peculiarities of Japanese society in a time of great change. One of his best-known novels Aguranabe 安愚楽鍋 (Sitting Cross-Legged at the Beef Pot), was set in a Tokyo beef restaurant (gyūnabeya) which specialised in serving gyūnabe  牛鍋, the forerunner of the modern sukiyaki. Aguranabe was published in five volumes in 1871-1872 and consists of a series of vignettes which poke fun at the various customers and their blind admiration of all things Western.4 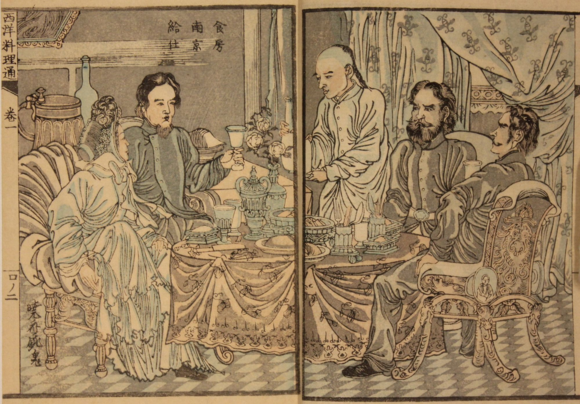 Yet while he was quick to make fun of the foibles of these beefeaters, Robun also subscribed to the idea that Western cuisine might have benefits and wrote Seiyō ryōritsū, as he recorded in the introduction, “to teach our countrymen the cooking of other countries and so aid social intercourse”.  Robun explained that his book was based on a translation of two notebooks written by an English resident of the foreign settlement in Yokohama to show his Japanese servants how to cook Western meals. He lists 70 recipes in four categories: “soups”, “fish”, “sauces”  and “boiling and baking”.5 For each recipe there is a Japanese description with the original English name more or less accurately rendered in Japanese katakana script, followed by the list of ingredients and instructions on preparation.

Recipe 53 is for “curried beef or mutton” while recipe 62 is for “curried veal or fowl” - both involve adding curry powder to a meat stew.  Recipe 62 also describes serving the meal with rice – perhaps the first true “curry rice” recipe ? 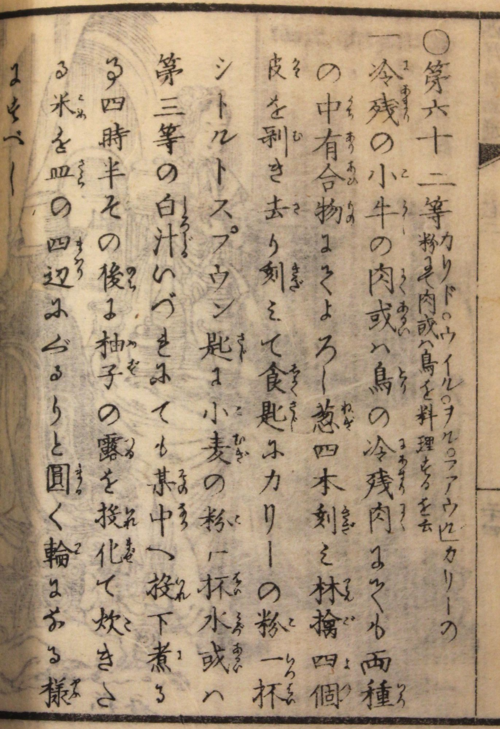 Seiyō ryōritsū contains nine illustrations by Kawanabe Kyōsai (or Gyōsai) 河鍋 暁斎 (1831-1889), an artist renowned for his skill as a painter and caricaturist as well as for his hard-drinking and eccentric behaviour. Kyōsai brings his whimsical approach to the potentially unpromising subject matter of a cookery book, providing humorous depictions of formal meals where foreigners entertain slightly uncomfortable-looking Japanese guests, of masters supervising their cooks, and of foreigners getting drunk. 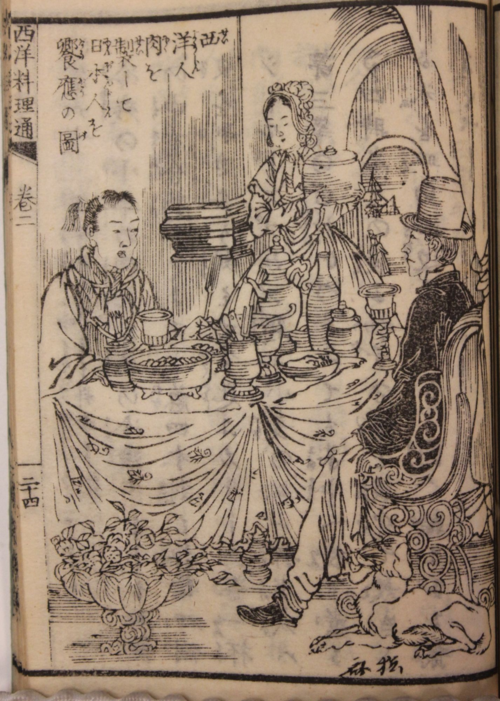 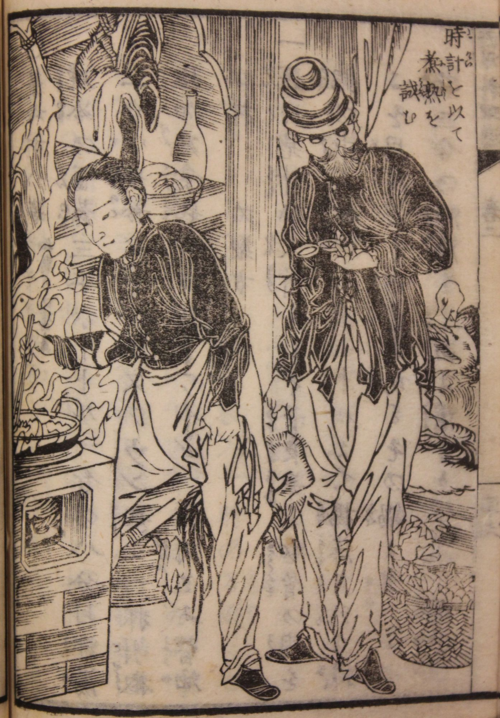 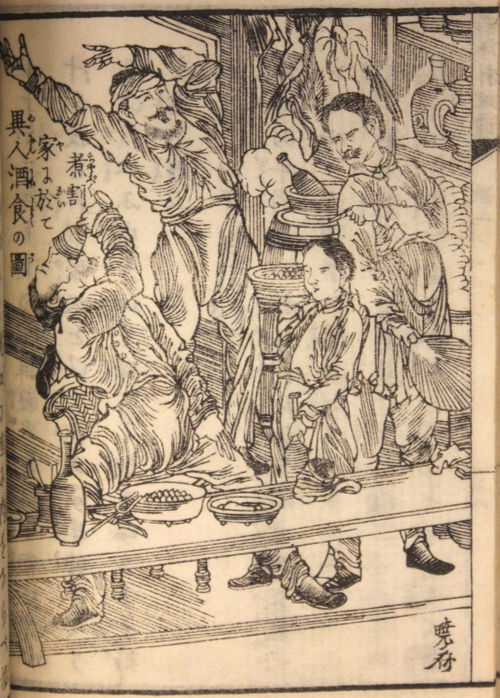 He also thoughtfully provides a series of pictures of cooking and dining utensils, including what may have been to many contemporary Japanese such unfamiliar objects as tables, chairs, ovens, roasting-spits, cutlery and sugar tongs. 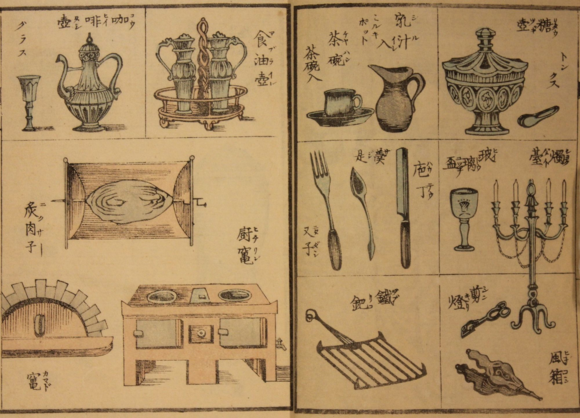 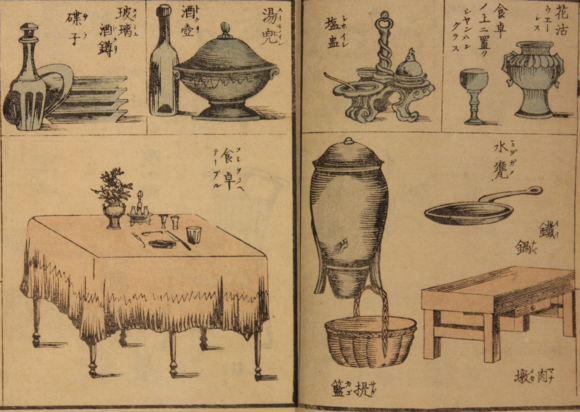 Posted by Annabel Gallop at 8:05 AM