The Jatakas: Birth Stories of the Bodhisatta

The Buddha’s previous lives are the subject of the collection of stories commonly known as the Jatakas, which show how he gradually acquired greater strength and moral stature as his soul passed from one incarnation to the other. These well-known stories were narrated by Gautama Buddha himself during his ministry. There are actually 547 stories but the number is often rounded up to 550. Some of the stories are quite brief while others are of considerable length. The ten major stories are Temiya, Mahajanaka, Suvanna Sama, Nemi, Mahosadha, Bhuridatta, Canda Kumara, Narada, Vidhura, and Vessantara. Named for their principal characters, they describe the perfection of ten important virtues: Temiya, renunciation; Mahajanaka, courage; Suvanna Sama, devotion; Nimi, resolution; Mahosadha, wisdom; Bhuridatta, perseverance; Canda Kumāra, forbearance; Narada, equanimity; Vidhura, truthfulness; and Vessantara, charity. A Burmese acronym for these ten stories, “Te-Ja-Su-Ne-Ma-Bhu-Can-Na-Vi-Ve”, is familiar to all Burmese Buddhists. Shown here are three illustrated Burmese folding book manuscripts containing Jataka stories (Or 4542A & Or 4542B, Or 13538,  Mss Burmese 202), which have just been digitised.

The scene is from the Mahasudassana Jataka which tells of the death of a great king, Sudassana, ruler of Kusinara, who is shown here lying on a royal couch in a palm grove.  He preaches to his grieving queen and courtiers on Sankhara (the impermanence of everything). He advises them to follow the practice of Dāna (generosity) and to observe Sila (morality).  The Buddha is identified in this Jataka as Sudassana, and his disciples are then his courtiers.  The Mahasudassana Jataka is linked to the Buddha’s discourse, the Mahasudassana Sutta, delivered to his disciple, Ananda, on his final journey to Kusinara. 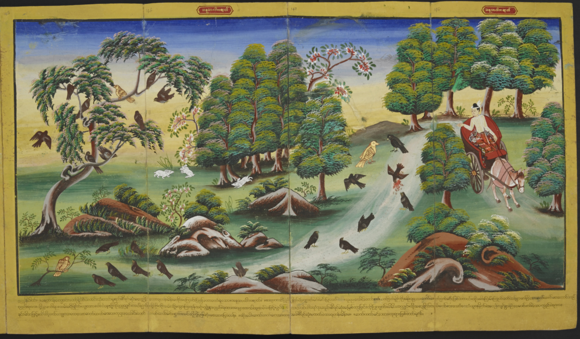 In this Jataka, the Bodhisatta was king of the birds, who lived with his followers in a forest. One of the birds tried to keep other birds from the road where she had found fine food which was dropped by passing carts and carriages. She told them to keep away from that dangerous area, as the carts and carriages were drawn by fierce oxen and horses. All birds took heed of her warning, and avoided going to that area. But one day when she heard the sound of a carriage coming along the road and went there to fetch food, the greedy bird was herself killed by the carriages.

The Bodhisatta and his younger brother became ascetics when they struggled to cope with the unbearable pain of losing their parents. The elder lived on the Upper Ganges and the younger lived by the lower river. Maṇikaṇḍa, a Serpent King in the guise of a man, came to the younger ascetic’s hut and became his good friend. When Maṇikaṇḍa finally put off his disguise, the ascetic was so afraid of him that he grew thin and pale. The elder ascetic suggested to the younger ascetic that he should ask the serpent for the beautiful jewel which hewore around his throat. After the younger ascetic made this request several times, the serpent went away and never came back again.

Tirita-vaccha Jataka tells of a story of when the Bodhisatta was an ascetic living in the forest and a king who had been defeated in a battle came through on his elephant.  The king got stuck in a well while he was looking for water.  The monk rescued him from the well, and he was rewarded with great honours and a place at the king’s palace. 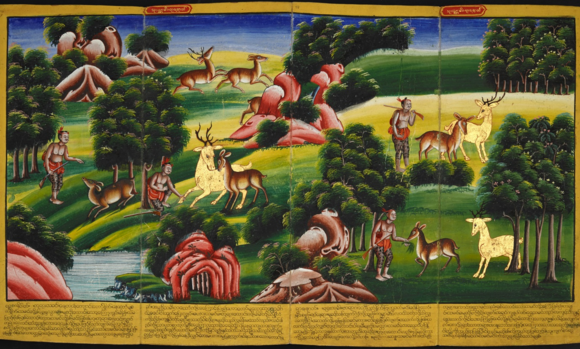 This is a scene is from the Suvannamiga Jataka in which the Bodhisatta was born as a golden stag and lived contentedly in the forest with his mate and other deer.  One day, a hunter set a cruel snare in which the stag was trapped. The rest of the herd of deer fled, but his mate approached the hunter and offered her life in place of the stag’s, the king of the herd. Impressed by such love and bravery, the hunter spared both creatures and was rewarded by the stag with a magic jewel.  This enabled the hunter to give up taking creatures’ lives and to set up a household, and practise alms giving and other good deeds. 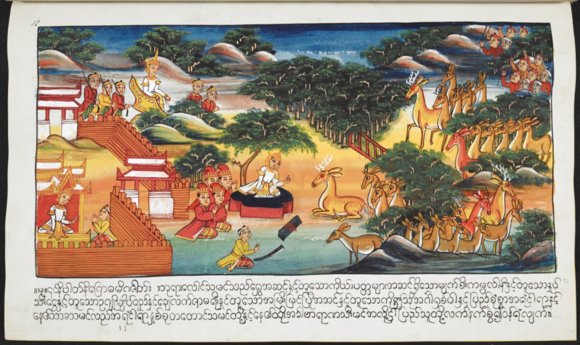 The Bodhisatta here takes the form of a deer called Nigrodha, who lived in a forest where he was attended by five hundred deer. Another deer called Sakha, who also had five hundred attendant deer, lived nearby. There was an agreement between these two leaders that, on alternate days, a deer from their herd should offer itself to be killed by the king of Varanasi who was fond of hunting.  One day come the turn of a pregnant hind of Sakha’s herd.  She went to Sakha and asked to be allowed to wait until she has given birth but Sakha refused and asked her to take her turn.  However, when the pregnant hind appealed to him, Nigrodha took her turn himself.  The king was greatly moved when he heard the story and he granted both Nigrodha and the pregnant hind immunity. Nigrodha was not satisfied and asked the king to grant immunity to all living beings. And the king granted his wishes. 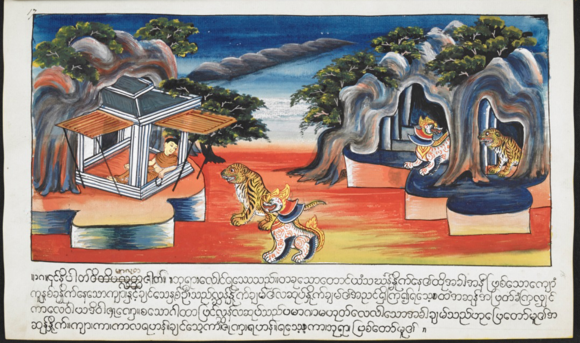 The Jataka stories have been illustrated in sculptures and paintings throughout the Buddhist world.  Burmese temple walls have wonderful paintings of the Jataka stories. These stories are meant to teach the values of self-sacrifice, mercy, honesty and morality.

Posted by Annabel Gallop at 6:09 AM