What to give the English king who has everything?

Today's post is by one of our readers, Dr. Shamma Boyarin, Assistant Teaching Professor in Religious Studies, Medieval Studies, and English at the University of Victoria in British Columbia, Canada. He specializes in medieval Hebrew and Arabic literatures, with focus on philosophical and astronomical texts and cross-cultural influences between Jewish, Muslim, and Christian communities.

Last summer I had the chance to work with some Hebrew manuscripts at the British Library. While I had a few specific items I wanted to examine, I also took the opportunity to look at a variety of books beyond my specific expertise (medieval Hebrew romances and philosophical and astronomical texts). I wanted both to acquire broader exposure to Hebrew scripts of various centuries, regions, and manuscript types, and to see what I might discover by accident as it were. It is one of these “extra” manuscripts I will discuss here: MS Royal 16 A II, a Hebrew book made for King Henry VIII.

One might imagine a book for a king to be big, or lavishly ornamented with many illustrations, or to feature use of gold leaf and other expensive pigments, perhaps to include a depiction of the king’s arms or other decorative elements tying the codex to its royal owner. But this is not at all the case with Royal 16 A II, which is comparatively small (102mm x 66mm, with only 49 paper folios) and contains no images or adornment. It appears to be a rather humble gift for a king. 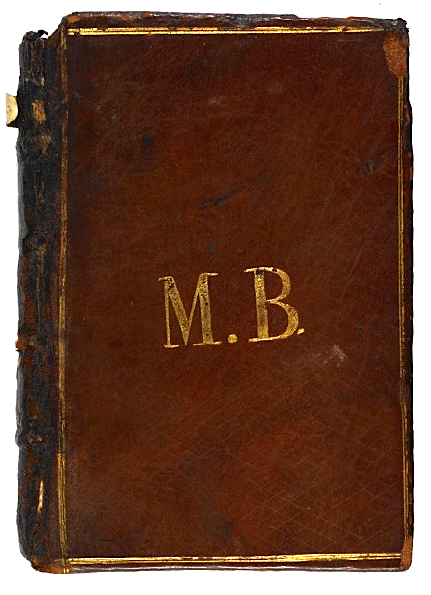 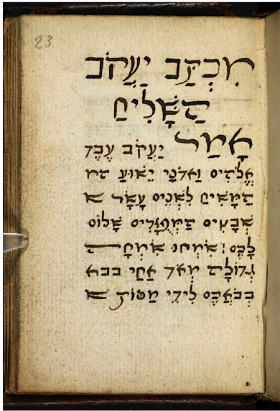 The codex, which reads right to left, begins with a Latin dedication page (folio 1v), which translated reads:

To the most invincible King of England and France, Lord of Ireland, Defender of the Catholic Faith, and in Earth Supreme Head, Henry, eighth of his name, John Shepreve wishes lasting happiness. 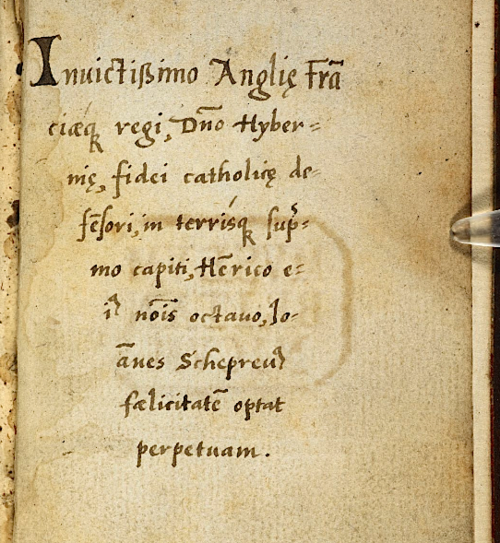 Henry was given the title fidei defensor by Pope Leo X in 1521, after his composition Assertio septem sacramentorum adversus Martinum Lutherum (“Declaration of the Seven Sacraments against Martin Luther”), and it was officially removed by Pope Paul III in 1535, after Henry broke with the Catholic Church. Although later, in 1544, Parliament restored the title as an expression of the king’s role in the Church of England, this was after John Schepreve (our author and translator) died. We also know that the title “Supreme Head of the Church of England” was used commonly only after the 1534 Act of Supremacy, and that the Latin in terra supremum caput Anglicanae ecclesiae does not seem to appear in the style of the sovereign until 1534. (See J. Frank Henderson’s “Sovereign and Pope in English Bidding Prayers,” especially the “Appendix: Titles of Henry VIII,” collated from David Wilkins, Concilia Magnae Britanniae et Hiberniae, vol. 3, London, 1737). The presence of the fidei defensor title, the odd use of the in terra supremum caput title without the Anglicanae ecclesiae qualification, and what we know of the author and translator’s biography, suggests a date for this manuscript, then, very close to 1534.

As the dedication indicates, the man who wrote the Latin encomium and translated the New Testament epistles into Hebrew was Johannes Scheprevus, that is, John Shepreve. According to the Oxford Dictionary of National Biography, Shepreve was Professor of Hebrew at Corpus Christi College, Oxford by 1538. He also had an authoritative command of Greek (having read in Greek at Corpus Christi from 1528), and of course Latin. J. Andreas Löwe’s assessment in the DNB is that, while Shepreve had deep ties to the Roman Catholic Church (his nephew William Shepreve was a Roman Catholic priest), and later in his life  “described pre-Reformation religious practice with … affection” and doubtless remained religiously “conservative,” he nevertheless “probably subscribed to the royal supremacy.” Shepreve died in July 1542.

Shepreve’s Hebrew script in Royal 16 A II is very clear and easily readable, and he vowels words for pronunciation throughout. He does have one interesting characteristic that I have not seen before (perhaps common amongst Christian Hebraists of the time?): he adopts a final form of the letter ל, which traditionally does not have a distinct final form. See here:

While most of the time Shepreve’s translation is understandable, sometimes it is not, or seems awkward, mainly due to incorrect (though never random) usage. So, for example he uses the word

(f. 23v, in James 1:3-4), tikvah, which means “hope,” where the Douay-Rheims has “patience” (Vulgate patientia) and, likewise, a modern Hebrew translation has “סַבְלָנוּת” (savlanut, straightforwardly meaning “patience”). This suggests, perhaps, that Shepreve is working exclusively from the Greek, where the equivalent (hupomonē), as I understand it, connotes hopefulness as well as patience.

In one case, Shepreve seemingly misses an obvious biblical reference in translating a quotation from Leviticus 19:18 (“love thy neighbor as thyself” in James 2:8) semantically correctly (leaving out “as thyself”), but failing to use the actual corresponding phrase found in the  Hebrew Bible וְאָהַבְתָּ לְרֵֶעֲךָ כָּמוֹךָ (this even though later on the same page he correctly identifies the references to the Ten Commandments in James 2:11):

However, occasionally he manages a poetic turn in Hebrew that is quite beautiful, such as, on f. 24r:

That is, “A double minded man is inconstant in all his ways” (James 1:8). Shepreve’s Hebrew version rhymes the two clauses of the sentence, and his formulation of nod yanud, literally “wanders,” has a peculiarly biblical lilt (though this specific formulation does not actually appear in the Hebrew Bible). A more contemporary Hebrew translation reads:  בִּהְיוֹתוֹ אִישׁ הַפּוֹסֵחַ עַל שְׁתֵּי הַסְּעִפִּים הֲפַכְפַּךְ בְּכָל דְּרָכָיו (the modern Hebrew translation I am using for comparison can be found here).

Occasionally Shepreve’s translations make sense, but only if you know the original (presumably the Greek) source, for example (f. 47r):

This word, ahavoteychem, means “your loves” or “your beloved things,” from Jude 1:12, and is rendered as “your feasts of charity” in the King James Version. It is, for Shepreve and for the King James translators, from Gk. agapē, which can mean “love” or “charity” but in this context “love-feasts.” Needless to say, the Hebrew word Shepreve chooses does not elsewhere denote feasting or fellowship.

Shepreve has a habit of writing to the end of the line, regardless of space available, but he will start a word over on the next line if he cannot fit it in. These incomplete words are never voweled, as illustrated, for example, by the unvowelled letters at the end of lines on folio 47r: 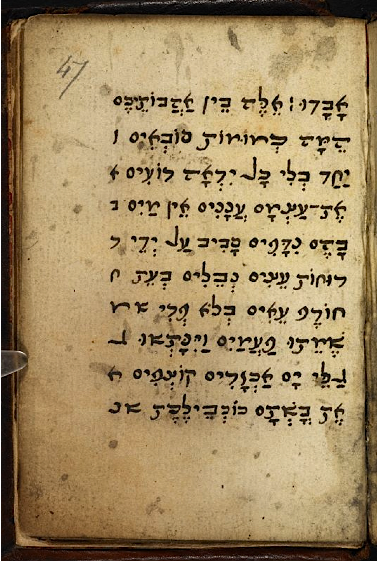 But Shepreve is clearly very careful about his work: on occasion, he skips a word and goes back to add it upon realizing the omission or checking his work, as here (f. 44v):

It seems likely that further examination of this little codex will prove fruitful to both scholars of Henry VIII and scholars of Christian Hebraism in the sixteenth century, a time when Jewish scholars (still under the 1290 edict of expulsion) were almost certainly absent from England. What exactly was Shepreve translating from? Are the idiosyncrasies of his script and translation common among Christian Hebraicists of the era, or are they particular to English practice? Would Henry VIII have requested Hebrew translation of New Testament books? Why these two epistles, and could the king have used this book, or might he have wanted to learn, to pronounce Hebrew himself? Henry VIII established the Regius Professorship of Hebrew at Oxford in 1546 (four years after Shepreve’s death), so it is not impossible that the he held a longstanding intellectual and religious interest in the language. Perhaps John Shepreve and his book had a part in shaping that interest.

Because of current academic disciplinary divides and archival practices (for example, the separation of reading rooms for western manuscripts and manuscripts in “Asian and African” languages), experts on Henry VIII and the Reformation may not easily share or glean knowledge from experts in Hebrew (or Greek) manuscripts or scripts. Exploration of books like this, however, reminds me that pooling our expertise is often necessary in manuscript studies—and such scholarly collaboration will no doubt yield dividends for understanding this fascinating little gift, fit for an English king.

A fully digitized copy of MS Royal 16 A II can be explored here.

My thanks to Adrienne Williams Boyarin and Justine Semmens Ash for their help with Latin and with dating issues.

Posted by Ursula Sims-Williams at 4:36 PM