Happy New Year – with a splash of cool water!

Between the 13th and 15th April the Water Festival, locally known as Songkran or New Year Festival, takes place in Thailand, and it is indeed one of the most colourful and merriest festivals in the entire region since it is observed in neighbouring Myanmar, Laos and Cambodia as well. Tai peoples living in the south of China and in Vietnam also celebrate the Water Festival. Songkran is derived from the Sanskrit word saṅkrānti meaning “progress” or “move forward”, describing the entry of the sun into any sign of the zodiac according to the solar calendar. The full traditional name of the April Songkran - when the sun leaves Pisces to enter Aries - was Maha-Songkran, meaning major Songkran, in order to distinguish it from the other monthly Songkran. Although Maha-Songkran takes place in the 5th month of the lunar year according to the traditional Tai calendar, it is regarded as the start of the New Year because it marks the beginning of the annual rice planting cycle, which usually starts in May as soon as the rains begin to fall. 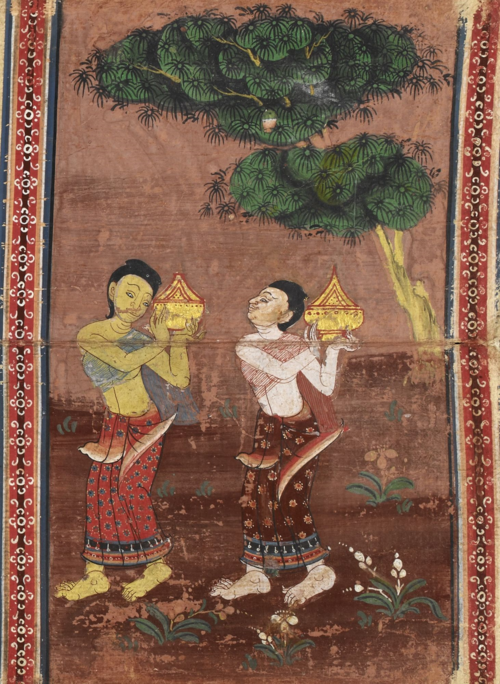 The origins of the festival are explained in a legend which is well known all over mainland Southeast Asia. There was once a young man, Dhammapala, who was highly prodigious in learning and could even understand the language of birds. The god Kabila Mahaphrom (Brahma) came down to earth to challenge Dhammapala with three riddles, with the wager that if the young man failed to give the right answers within seven days he would lose his head, but if he succeeded, Brahma himself would give up his head. Dhammapala had already prepared himself to die when, under a tree, he overheard an eagle mother telling her curious offspring the solution to the riddles. On the appointed day, the young man gave Brahma the three correct answers and the god immediately cut off his own head. 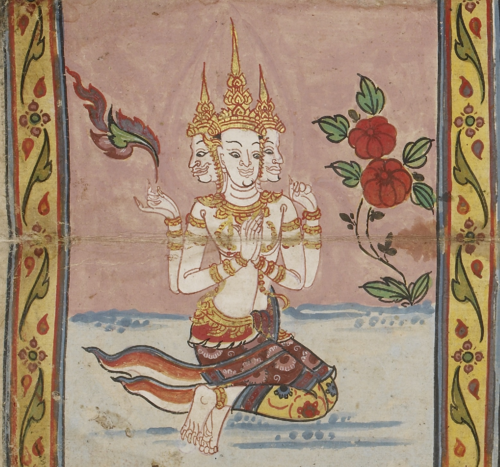 The god Brahma, characterised by his four faces. Illustration from an 18th century Thai manuscript containing a text on the Great Qualities of the Buddha, British Library, IO Pali 207, f. 27

However, Brahma’s head was extremely hot, and if it touched the earth, there would be a universal firestorm destroying all life, while if it fell into the sea, all water would dry up. Therefore, the god’s daughters took care of his head and deposited it in a heavenly cave. Once every year during Maha-Songkran one of the daughters removes the head from the cave, bathes it and carries it in a procession together with all the other gods and heavenly beings circumambulating  Mount  Meru.  The procession is followed by a joyful feast of the gods and goddesses. The seven daughters represent the seven days of the week and all have their particular names and vehicles that they ride on, but the one who carries Brahma’s head on Songkran Day is called Nang Songkran, Miss Songkran. 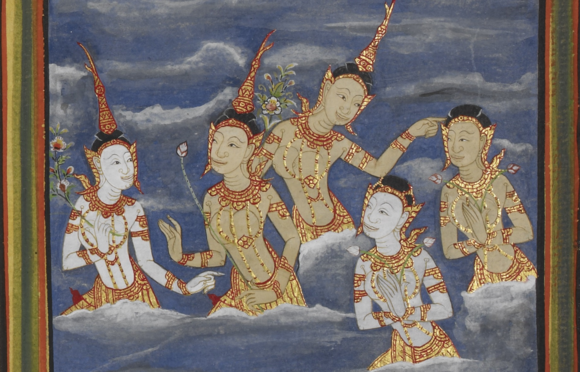 The heavenly procession and feast were traditionally re-enacted on earth, and this tradition is still followed today with some local amendments and additions. The exact date and time of the appearance of Miss Songkran with Brahma’s head is when the sun first enters the sign of Aries, a date and time to be established by astrologers and astronomers. The day before Songkran people clean their houses and compounds. Early on the first day of Songkran, people young and old visit their local Buddhist temples to offer food to the monks, to pray and to listen to sermons. Many communities organise temple fairs with music and other entertainments on this occasion. In the afternoon, there is an official bathing ceremony of the Buddha images and of the abbot of the local temple. After this purification ceremony begins the actual Water Festival, which traditionally involved people gently pouring water into the hands of elders and respected persons in order to pay tribute to them, and younger people helping the elderly take a scented bath and change into new clothes presented to them. During all three days of the Songkran Festival people amuse themselves by throwing water at each other or at strangers, and any passer-by can be sure to get soaking wet. Even monks are not exempted. In some places dry coloured powder is also thrown at people, an act that has parallels with the Holi Festival. 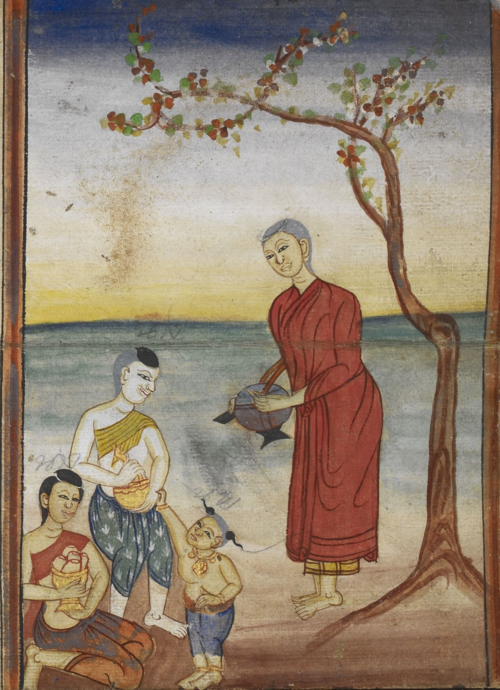 A family offering food to a Buddhist monk. Illustration from a 19th century Phra Malai manuscript from central Thailand, British Library, Or. 14956, f. 25

Other activities during the Songkran Festival include a religious service in memory of the deceased and offering ceremonies for local guardian spirits. The ashes of the royal ancestors are blessed by the supreme members of the Sangha. In northeast Thailand, like in Laos, families organise Su Khwan ceremonies in order to wish each other good health, peace, prosperity and longevity, and to receive blessings from their elders. Many people engage in special merit making acts by releasing birds, fish or tortoises from captivity, or by offering sand to their local Buddhist temple. The sand offering, which can be made even by the poorest people and carries the same merit as a contribution to the building of a real pagoda, is done in form of erecting a sand pagoda or stupa-like structure in which a coin or a leaf from the Bodhi tree is placed. On the outside, the pagoda or stupa is sprinkled with water and can be decorated with flags and banners while candles, incense sticks and flowers are placed at its base. It is said that the sand helps to raise the level of the temple ground which may be susceptible to flooding during the rainy season. 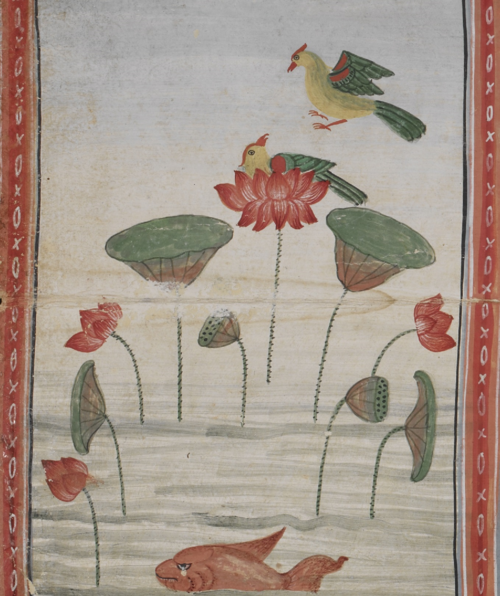 Illustration from a collection of Buddhist texts and Sutras contained in a Thai folding book from the 18th century, British Library, Or. 14027, f. 66

In many places, a beauty contest takes place during the Water Festival. The winner, who is not only the most beautiful and best dressed but also the most virtuous girl, is crowned Nang Songkran in memory of Brahma’s daughters who look after the god’s head eternally. She will take part in a colourful procession while being driven in a carriage that has the shape of the animal that is the vehicle of the daughter of Brahma whose turn it is to cleanse the god’s head at the beginning of this New Year.

Posted by Annabel Gallop at 7:42 AM