Think ‘Malay manuscript’, think ‘Jawi’ – the modified form of the Arabic script used in Southeast Asia – but this is not invariably the case. Manuscripts in the Malay language from the interior regions of south Sumatra are often written in local incung scripts of Indian origin, which read from left to right. Apart from the rare Kerinci script, the two main variants of incung script encountered in manuscripts from south Sumatra are Lampung and Rejang (or rencong). In addition to paper, manuscripts are written on pieces of bamboo and strips of tree bark folded in concertina form. Most such manuscripts probably date from the late 18th and 19th centuries, but a bark book in Lampung script was given to the Bodleian Library in Oxford by Jo. Trefusis in 1630, making it by far the earliest dateable south Sumatran manuscript known (reproduced in Gallop & Arps 1991: 71).

Syair perahu, ‘The poem of the boat’, Sufi poem in Malay in rencong script. British Library, MSS Malay A 2

Among the Malay manuscripts in the British Library that have recently been digitised are four manuscripts from south Sumatra. Shown above is a folded tree bark manuscript of Syair perahu, ‘The poem of the boat’, written in Malay in rencong script (MSS Malay A 2). This Sufi poem comparing the mystical path to a voyage in a boat, based on the system of the ‘seven grades of being’ (wahdat al-wujud), was formerly attributed to the Sumatran mystic Hamzah Fansuri. However, Braginsky (2004: 676) has distinguished two distinct Syair perahu, neither of which is by Hamzah; the first - as in the present manuscript - which has only survived today in rencong script, and was probably composed in the second half of the 17th century by Syamsuddin of Pasai or one of his disciples; and a second, better-known, version, currently preserved in Jawi manuscripts. 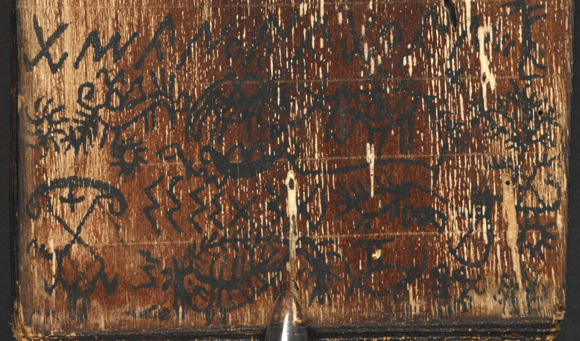 A brief unidentified text, perhaps an incantation, with drawings, at the end of the manuscript of Syair perahu. MSS Malay A 2

Two other manuscripts are both written on bamboo. One incomplete text in rencong script, comprising 31 strips of bamboo, contains a tembai (myth of origins) and teremba (genealogy), in the form of a metrical litany narrating the descent of the soul from its prenatal state in the land of the souls (MSS Malay D 11). According to the Dutch linguist and authority on Sumatran langauges, Petrus Voorhoeve, ‘It is a curious document of the syncretism of animistic and Muslim ideas that is characteristic for South Sumatra in the period of transition from the old religion to Islam. In such a composition one cannot expect a strick adherence to the rules of logic.’  Voorhoeve further notes that the last part of the text 'refers to the reluctance of the soul to be born, caused by the premonitions of death that it feels during the last nine days before birth. On each of these days it entreats its parents to avert this threatening danger. Reflection on its eternal origin, purification with citrus-juice, sacrificial meals and prayers are the means to reach this end. Their effect is that the soul feels "a little better", and though the text ends abruptly in the middle of the last day we may suppose that the soul is at last persuaded to take its abode in this world of "time" and "death". Perhaps this litany was recited during the ceremonies which were performed in the last days before the birth of a child.'

The second manuscript on bamboo is Seribu maksa (Or. 12986) concerning a conversation between the Prophet (Nebi Rasululah) and Sayih Wali Mahemat. The text is in south-Sumatran literary Malay in Lampung script, which can be distinguished from rencong script by the presence of a symbol for the vowel ĕ pĕpĕt (like the initial 'a' of 'alone'). Digitised together with the manuscript is a typed sheet containing Voorhoeve's revision of the order of the bamboo strips, based upon the same text as found in the National Library of Indonesia, Jakarta, MS E 86. 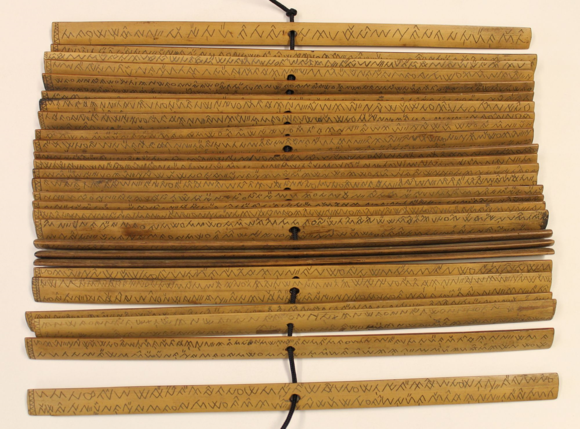 Seribu maksa, in Malay in Lampung script. British Library, Or. 12986

The fourth manuscript (MSS Malay A 4), and the only one on paper, is a collection of pantun or quatrains entitled Surat pantun cara Lampung, written in parallel columns of the Lampung dialect in Lampung script and Malay in Jawi script. The manuscript, which is dated 1812, contains poems used by young people in courtship. It was probably written for a European, perhaps in Bengkulu, where the East India Company had a base. 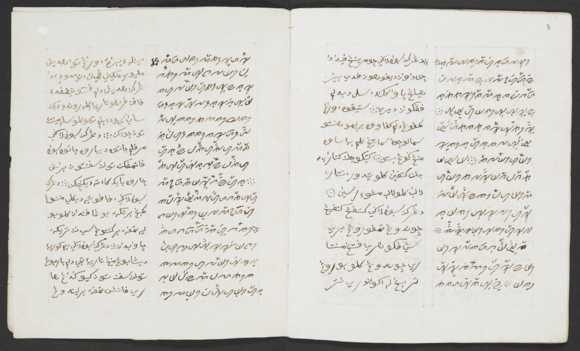 To this small collection of four Malay manuscripts from South Sumatra in the British Library, we are very pleased to have added a fifth, thanks to the generosity of Christopher and Zissa Davidson. Chris worked in Lampung in the 1980s, and when he and Zissa left in 1988 they were given a bark book as a leaving present by very close Dutch friends. The book had earlier been acquired by these friends in a small tourist shop selling some local artefacts in a hotel beside Danau Ranau, a volcanic lake in the northwest of the province. Zissa first contacted the British Library in 2002 to find out some information about the manuscript. After some discussions, earlier this month she and Chris most kindly came up from their home in Hampshire to donate the manuscript to the British Library, where it has been given the shelfmark Or. 16936. The contents have not yet been identified (alas, Dr Voorhoeve passed away in 1996), but the ruled lines dividing the pages suggest that this may be a compendium of short texts. We hope to be able to digitise the manuscript soon so that it can be studied by the few people still able to read Lampung script. 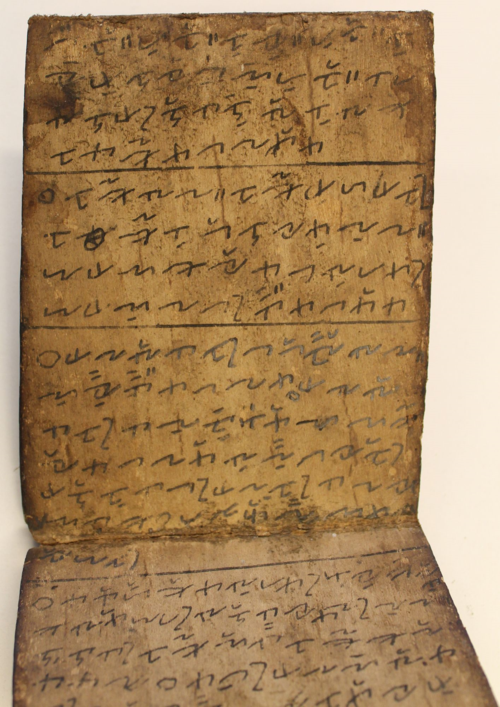 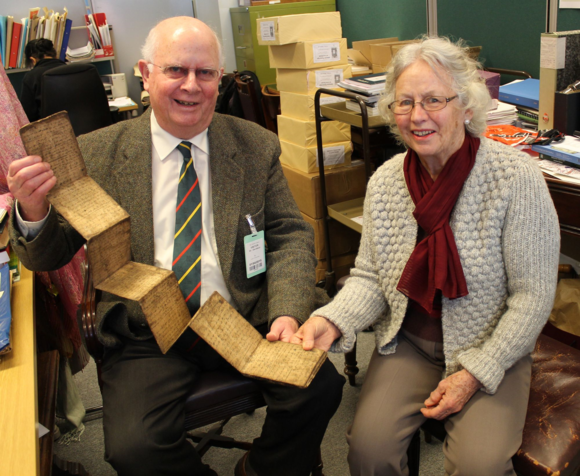 The Lampung manuscript (Or. 16936) donated to the British Library by Chris and Zissa Davidson, 1 April 2015

Download MSS.Eur.C.214 contains a synoptic romanized text of MSS Malay A.2 by P.Voorhoeve.

In which direction does one 'read' Malay?