The Chinese collection at the British Library includes an interesting series of around 40 posters produced in the 1970s and 1980s in the People’s Republic of China which represent an extraordinary example of popular visual material created by official sources to promote a sense of shared history and national identity. 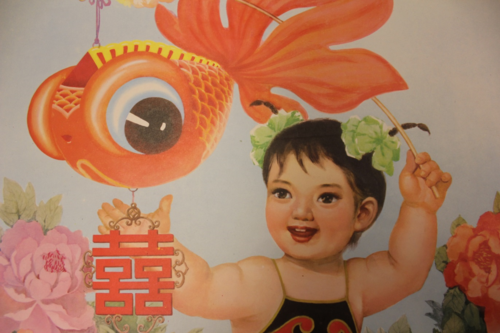 The Chinese collection of posters from the 70s and 80s can be grouped by different subject areas and themes: New Year Prints, including the “chubby babies” series, theatre and film posters, educational posters, prints on the Mao cult, ethnic minorities and so on. While they use and combine a range of different visual language and signs, their intention is the same: to encourage a certain vision of the nation and its culture, to evoke selected values, to show examples of role models, to strengthen the sense of community and belonging among the citizens.

In some of the posters we find a repetition of colours or symbols that for the Chinese viewer have significant meanings and which are immediately recognizable. Most of the material, and in particular the “chubby babies” posters, show a predominance of the colour red, an auspicious colour in both traditional and modern Chinese culture, while other items display particular types of flowers (for example, the chrysanthemum, symbol of longevity) or animals.

The British Library Chinese collection also includes some examples of official posters for the so-called yang ban xi (样板戏). The term Yang ban xi literally means “model operas” and it refers to six operas and two ballets written during the first years of the Cultural Revolution, when the traditional themes of the Chinese opera were banned and replaced with stories aligned with Mao Zedong’s thoughts and personally approved by Mao’s wife, Jiang Qing. The protagonists of the stories were often soldiers of the PLA (People’s Liberation Army) who stood out for their bravery, heroism and support to the rural people. 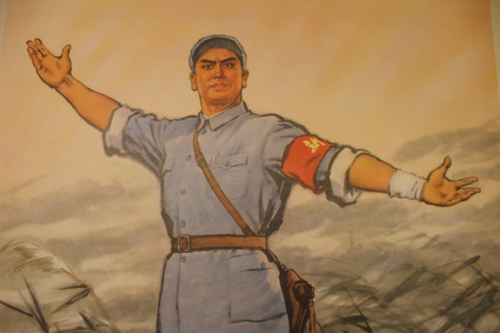 The yang ban xi monopolised the artistic production of the years of the Cultural Revolution and were massively distributed: they were not only performed on stage, but also broadcasted on radio and reproduced as movies. Coloured posters depicting key scenes from the plays begun to circulate widely throughout the country. Despite the range and the variety of distribution, the content of the yang ban xi had to be the same and strict guidelines were issued in order to guarantee that all the productions and performances were identical and were not deviating from the approved version.

The two ballets listed as “model operas” are Hong se niang zi jun (红色娘子军, The Red Detachment of Women) and Bai mao nü (白毛女, The White-Haired Girl). The first premiered in 1964, while the second was performed as an opera in 1945 and was later produced as a movie in 1950. The White-Haired Girl is based on a traditional story which is centred on the misery suffered by the local peasantry, particularly the women, and depicts the Communist Party as their saviours and heroes. The songs are now classics of Chinese culture and, unlike other ballets, the music contains a lot of vocal solos and choruses. 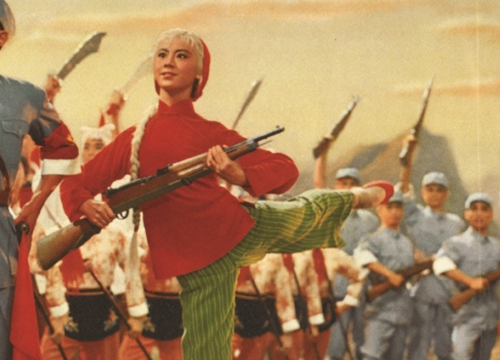 A selection of posters from the Chinese collection produced in the 1970s and 1980s will be featured in the new free online course “Propaganda and Ideology in Everyday Life”, a ground-breaking project which allows students to interact with the British Library’s original collection items. The course is developed in cooperation with the Centre for the Study of Ideologies at the University of Nottingham and will start in May 2015, on the FutureLearn platform.

You can find a video trailer here and access the course registration at this page.

With thanks to Ian Cooke, Curator, Social Sciences

Posted by Ursula Sims-Williams at 1:10 AM