Royal genealogies from Indonesia and the Malay world

The prestige of a royal house in the Malay archipelago rested in no small part on claims of  descent from illustrious ancestors. At the most deep-rooted level, myths of origin in Malay texts drew on primordial Austronesian beliefs of unity between the earth and sky, symbolised by the marriage between a prince who descended from heaven and a princess from the earth or water, who emerged from a mass of foam or a clump of bamboo (cf. Ras 1970: 81-99). With the coming of Islam, into this chain of descent were introduced powerful figures from the Islamic pantheon, pre-eminently the great hero Iskandar Zulkarnain (Alexander the Great), as well as the first man, Adam, and the Raja of ‘Rum’, as the Ottoman lands were known in the east. These ahistorical genealogies are found in court chronicles such as the Hikayat Raja Pasai, Sulalat al-Salatin or Sejarah Melayu recounting the origins of the sultanate of Melaka, the Hikayat Banjar from southern Borneo, and Hikayat Jambi from east Sumatra, preceding the more factual elements of the texts.

As well as depictions in prose, royal genealogies or silsilah are occasionally visualised as charts or diagrams, as found in three recently digitised Malay manuscripts depicting the ancestry of the royal houses of central Java (Or. 15932), of the kingdom of Pajajaran in west Java (MSS Malay F 1), and of Luwu’ in south Sulawesi (MSS Malay D 13). Artistically the most impressive is a genealogy in the form of a tree tracing the descent of the kings of Java, starting with Adam, placed in the roots of the tree, and ending in the outermost leaves with Sasunan Pakubuwana keempat (Pakubuwana IV of Surakarta) and Mataram keempat (Sultan Hamengkubuwana IV of Yogyakarta). The genealogy is found at the end of a volume containing the work Papakĕm Pawukon, containing an illustrated description of the 30 wuku of the Javanese calendrical tradition. The manuscript, in Javanese and in Malay in Jawi script, was written in Bogor in the Javanese year 1742 (AD 1814/5). It is said to be from Kyai Suradimanggala, Bupati sĕpuh of Dĕmak, who was one of Thomas Stamford Raffles’s closest friends and informants in Java. 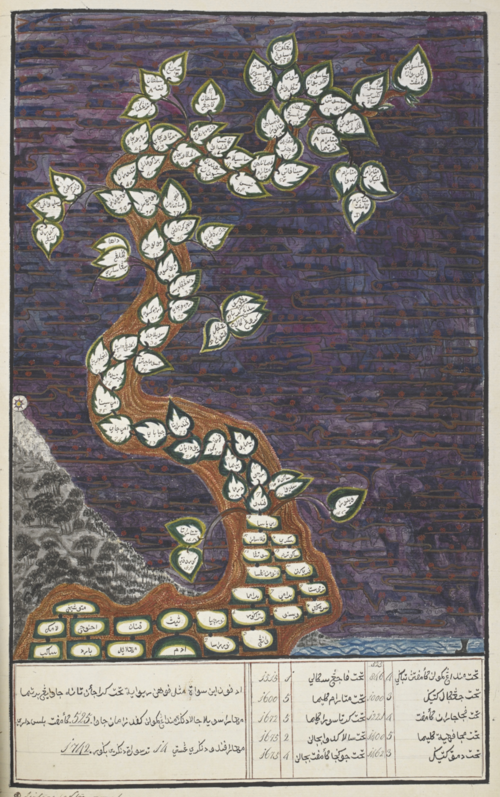 Little is known of the early history of the Hindu-Buddhist kingdom of Pajajaran in the Sundanese region of west Java, which was conquered by Muslim Banten in ca. 1579 (Ricklefs 1994: 38). A manuscript chart (MSS Malay F 1), just over a metre long, contains a genealogy written in romanised Malay starting with the legendary founder of Pajajaran, Prabu Siliwangi, and continuing through Suhunan Gunung Jati of Cirebon, one of the nine sages (wali) believed to have brought Islam to Java, to 'Pangeran Adipati Moehamad Djamoedin Aloeda' son of 'Pangeran Radja Nataningrat wakil Soeltan Sepoeh [of Cirebon] taoen 1880'. The list was probably written in the 1890s.

A third manuscript genealogy, like the west Javanese one above presented from top to bottom, but in this case written in Malay in Jawi script, is labelled 'Succession of the Datus of Luwu' (MSS Malay D 13) and contains the descent of the rulers of Luwu’, the oldest and most prestigious kingdom in south Sulawesi (see OXIS below). The genealogy starts with Orang Manurung and continues through 26 generations to Matinru ri Sabang Paru whose daughter married Sultan Nuh of Soppeng (r.1782-1820).

Perhaps the most grandiose narration of descent of a Malay royal house is depicted in a manuscript held not in the British Library, but in the Library of School of Oriental and African Studies (SOAS). This is an early 20th century  genealogy of the ruling houses of pre-Islamic Persia, the Malay sultanates and Turkey, joined by their common ancestor Yapit, son of Nabi Nuh (Noah). The left-hand branch shows the descent of the sultans of Johor and Perak from Iskandar Zulkarnain and the kings of Persia and Melaka. The right-hand branch shows the Turkish line, through mythical rulers to the Seljuks and Ottomans, ending with Sultan Abdülhamid II (r.1876-1909). This genealogy was published in the photographic exhibition Islam, Trade and Politics across the Indian Ocean, exploring links between the Ottoman empire and Southeast Asia.

Genealogy of the sultans of Perak and Johor, early 20th c. Library of the School of Oriental and African Studies, MS 40334

OXIS (Origins of Complex Society in Sulawesi) project: website with many links to publications concerning Luwu' and other early Sulawesi kingdoms