Scottish surgeon William Fullerton (d.1805) from Rosemount enlisted with the East India Company and served in Bengal and Bihar from 1744-66. Developing close ties with locals, including the historian Ghulam Husain Khan, he remained in the region after retiring. Although his impressive linguistic abilities brought him attention, Fullerton’s prominence stems from the fact that he was the sole European survivor of the attack by Navab Mir Qasim of Bengal against the British at Patna in 1763! 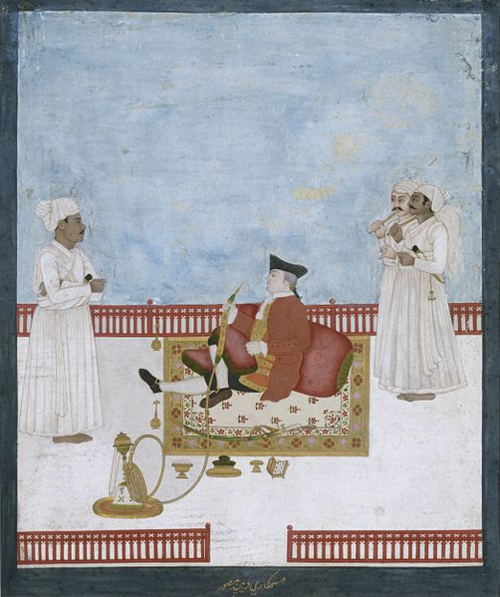 Living in Patna, Fullerton not only socialised with local historians, he befriended the artist Dip Chand. The artist was commissioned to paint Fullerton’s portrait and those of his acquaintances and members of his household, as well as scenes on religious topics. The British Library’s collection includes four paintings, two of which are illustrated below, and an additional six paintings are in the Victoria & Albert Museum. Each painting is inscribed on the reverse ‘W. F. 1764’ indicating that they were collected by Fullerton.

Little information has been discovered about the identities of artists flourishing in Bengal in the mid-eighteenth century. In fact, Dip Chand is the only major artist to be documented and that is directly through the connection to Fullerton. It is possible to suggest, based on Dip Chand’s portraits of Mir Qasim, that the artist spent some time in Murshidabad before migrating to Patna. While working in Patna he adopted a style that emphasized the effects of lighting and tonality, aerial perspective and experimentation with the saturation of pigments. His delineation of the human form is exceptionally fine, with subtle modelling and visible shadowing. He applied pigments with such precision that he effectively created a remarkable smooth surface. 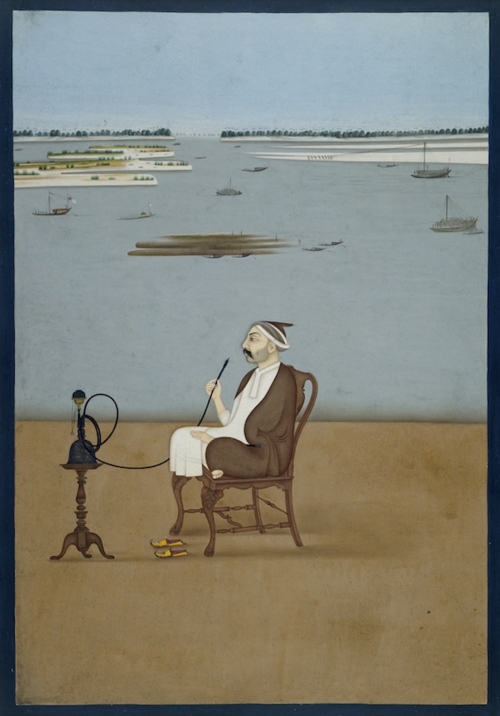 Ashraf ‘Ali Khan (d. 1792), half-brother of the emperor Ahmad Shah, is here portrayed in an atypical manner. Traditional portraiture conventions illustrated the subject either seated on a carpet or standing on a terrace, but he is sitting on a European wooden chair that has been placed on a tidal flat along the banks of the River Ganges. His simple attire includes a white jama with a heavy brown shawl draped over his shoulders, and he sits informally, cross-legged on the chair, his golden slippers removed, while holding up the mouthpiece of the hookah pipe. At a slight distance the hookah is placed on a wooden teapoy (three-legged table); the space permits the artist to accentuate the loops of the extensively long pipe. In the far distance are boats and sandbanks as well as the opposite riverbank. 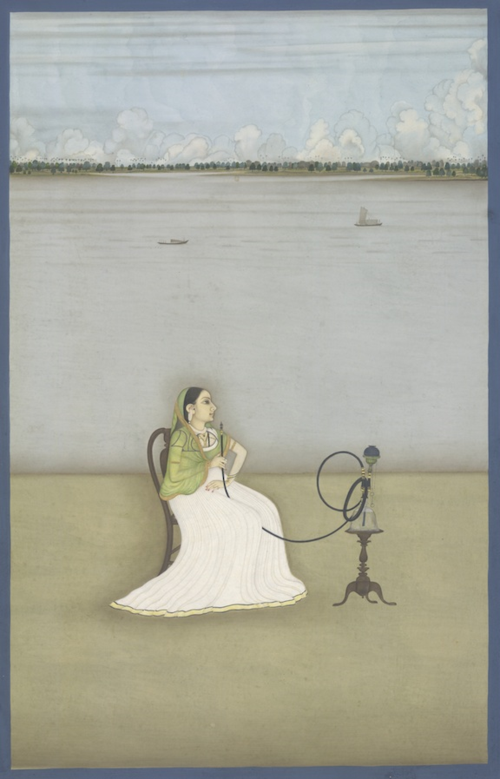 A second portrait in the British Library by Dip Chand is that of a lady named Muttubby. Her identity is inscribed on the reverse and she is very likely to be a courtesan or a favourite mistress of a notable figure in Patna. As in the portrait of Ashraf ‘Ali Khan (fig. 113), she is seated in a European chair, though with her feet firmly on the ground, holding up a hookah pipe to her lips. Positioned in strict profile, with her upper body slightly twisted towards the viewer, her rather slender arms are visible. Although the landscapes in the two compositions are very similar they do not quite marry up, and it is possible that the artist intended these to be a pair, mounted in an album facing one another.

Dip Chand’s other portraits of local women in the Victoria & Albert Museum follow this convention, showing them perched or squatting on their chairs and smoking from a hookah. All of these were also commissioned by William Fullerton and bear his initials, dates and the abbreviated names of the women.

If you enjoyed looking at the paintings and wish to have a copy for yourself, you can order one through the British Library's Fine Art Prints website.

Further reading:
J.P. Losty, 'Towards a New Naturalism: Portraiture in Murshidabad and Avadh' in Schmitz (ed.) After the Great Mughals, Marg Publications, Mumbai, 2002.