40th anniversary of the end of the Vietnam War

30 April 2015 marks the 40th anniversary of the end of the Vietnam War. On 30 April 1975, the Vietnam War, or the Resistance War against America as it is known by the Vietnamese, came to an end when North Vietnamese troops entered Saigon just before mid-day and President Dương Văn Minh of South Vietnam surrendered at the Presidential Palace in Saigon.  One of the most iconic images which marks the end of the war is that of a North Vietnamese tank storming into the front gate of the Presidential Palace. Following the Paris Peace Accord of 27 January 1973, Hanoi had started a final push under the Ho Chi Minh Campaign with the aim of seizing Saigon by 1975. The capture of Saigon brought jubilation to many Vietnamese, who were exhausted from the long war.

The Vietnamese press took the opportunity to capture the public mood by depicting their cheerful and celebratory emotions in a variety of formats. Articles, poetry, songs, paintings and drawings about the historic victory over the Americans and the unification of North and South Vietnam were widely published. The long and painful history of the war is probably best summed up by just a few frames of drawings from Tiền Phong (Vanguard), a weekly newspaper from Hanoi, in its 6th May 1975 issue. These illustrate the history of American involvement in the Vietnam conflict, from when the U.S. refused to sign or acknowledge the Geneva Accord in 1954 and decided to support Ngô Đình Diệm as the leader of the Republic of Vietnam (South Vietnam). This was followed by a military escalation under the Johnson administration in 1965, the Têt Offensive in 1968, the Nixon Doctrine and Vietnamisation in 1972 when President Richard Nixon decided to withdraw the American military from the war, and eventually the victory of Hanoi in 1975. 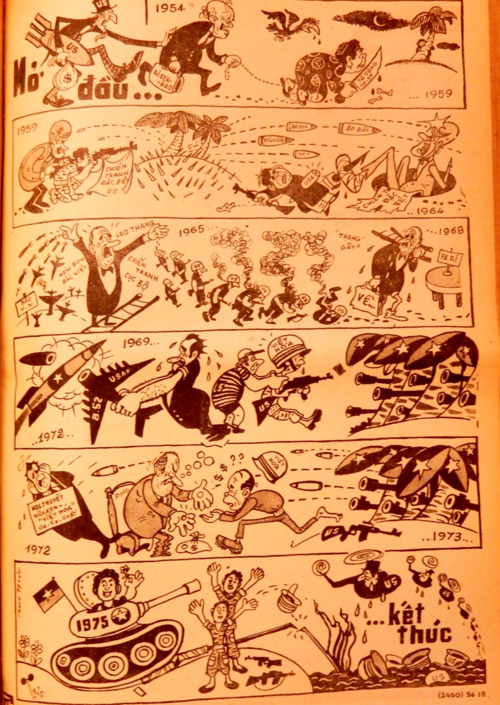 Hanoi’s successes in driving out the Americans and their allies from Vietnam and the reunification of the country have been immortalised in repeated images of the events. Tiền Phong (No.18, 6 May 1975, p.5) published a drawing of the Americans being swept out from the country. The front cover of this issue also depicted an event of the communist forces capturing Tan Son Nhat airport. Twenty years later, in its issue 437 (May 1995), Báo Ảnh Việt Nam celebrated the 20th anniversary of the end of the war by publishing a photo of Vietnamese children having fun with a tank from the war era. 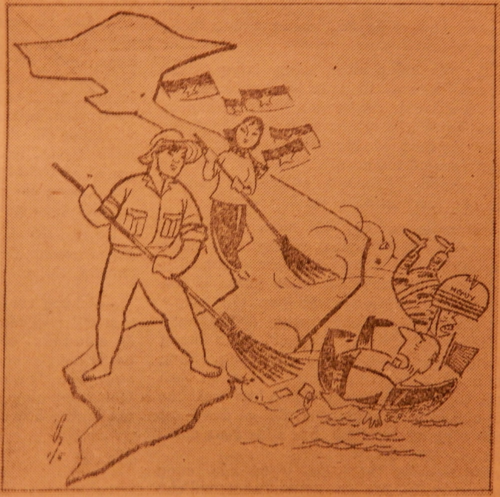 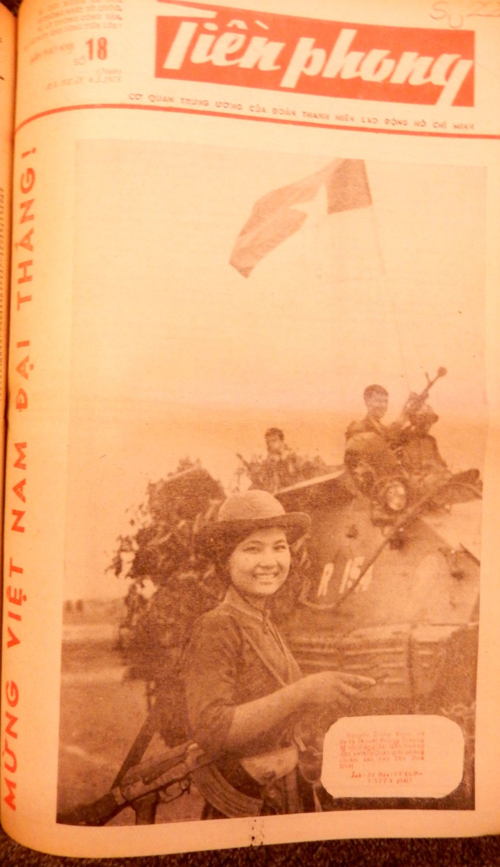 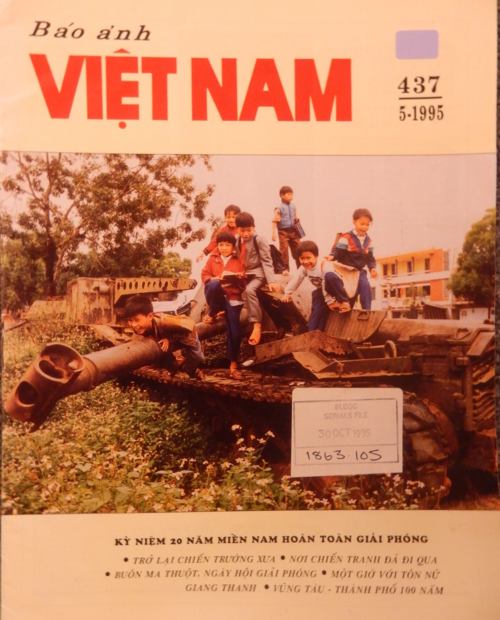 Not only did Vietnamese artists capture images of individual moments. They also gave accounts of key events and campaigns during the war. On its cover of No.2, 1987, Mỹ Thuật, a Vietnamese journal  for art reviews, reproduced a lacquer painting by Quách Phong, entitled Tiền  về Sài Gòn (Forward to Saigon), depicting Vietnamese communist guerrillas heading to the former capital of the South for a reunification battle. 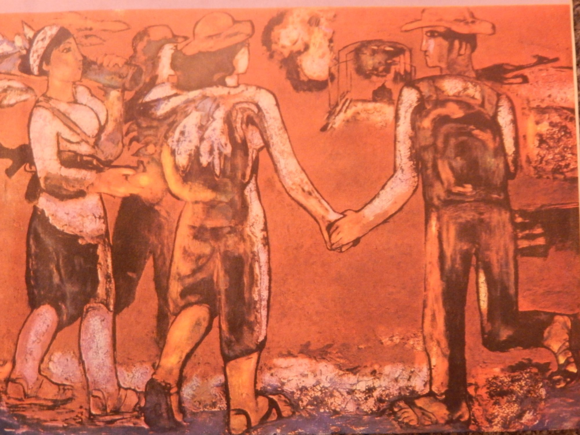 However, not every Vietnamese embraced the Hanoi victory of April 1975. The anti-communist Vietnamese who managed to leave the country and settled abroad, especially in the United States, Canada and France, organised resistance movements in attempts to bring down the communist government in Vietnam. One of the most active movements was the National United Front for the Liberation of Vietnam (Mặt Trận Thống Nhất Giải Phóng Việt Nam), founded  by Vice Admiral Hoàng Cơ Minh on 30 April 1980 in California. Key members of this Front were former military officers or government employees of the Republic of Vietnam (South Vietnam). For a large number of overseas Vietnamese, 30 April brought back bitter memories and they normally had different reasons to commemorate the day, the aim being to fight against the Democratic Republic of Vietnam. The resistance movement against Hanoi among overseas Vietnamese was most active in the 1980’s and 1990’s. There were attempts to recruit the Vietnamese abroad for military training and sent them back to operate in Vietnam. These activities also brought about diplomatic tension between Vietnam and Thailand since some of these movements used Thai territory as their operation bases.

Overseas Vietnamese publications, especially in the United States and Canada, lent support to the resistance movements. There were articles dedicated to reporting the movements and normally on the anniversary of the end of the Vietnam War (April or May issues), they published special issues to remind themselves of the bitter experiences of the war time, their nostalgia  and determination to fight against the communist regime with a bellicose approach. 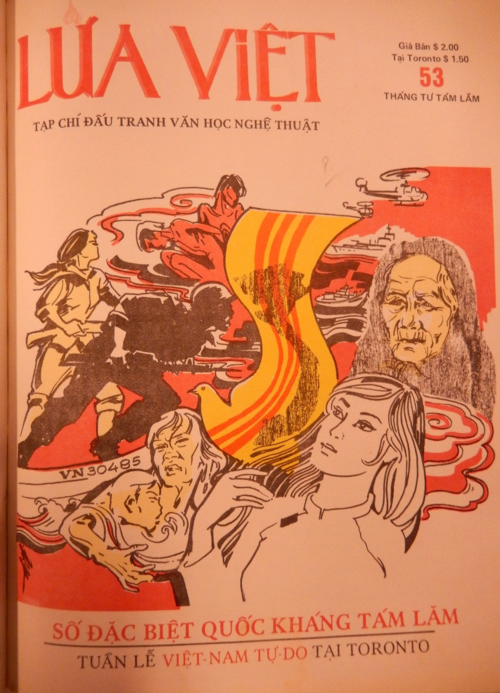 However, after more than two decades of unsuccessful action by the resistance movements, together with the economic changes introduced by Hanoi, known as Đổi Mới (Economic Renovation) towards the end of the 1980’s, Vietnam appeared eventually achieve what the country had fought for: unification and peace. 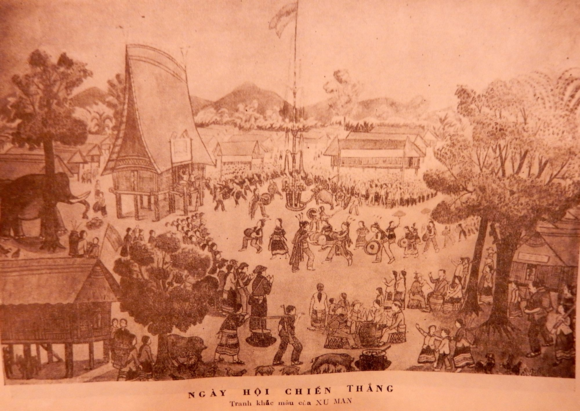 Posted by Annabel Gallop at 7:26 AM