The 1937 massacre in Addis Ababa

In the centre of Addis Ababa in the Siddist Kilo area, stands a monument known as The Yekatit “February” 12 Square Monument. The obelisk was built in memory of the 30,000 civilians massacred by Fascists on the 19th February 1937. The indiscriminate massacre that lasted three days, was in reprisal for the attempted assassination of "the Butcher of Fezzan", the Viceroy of Italian East Africa, Rodolfo Graziani.

The Italian government carried out a substantial number of war crimes in Ethiopia from 1935–1940. The most notable being the use of mustard gas and the bombing of a field hospital run by the Swedish Red Cross. However the massacre of Addis Ababa and other mass killings are to this day repudiated by the Italian government ignoring overwhelming historical evidence to the contrary.

Ian Campbell,  the author of  The Plot to Kill Graziani (Addis Ababa University Press, 2010), and The Massacre of Debre Libanos (Addis Ababa University Press, forthcoming), has presented  discoveries from his extensive research into the massacre of Addis Ababa, the greatest single atrocity of the Italian occupation of Ethiopia, and a hitherto undocumented event. Most of the documents, maps, photos and official government papers used in Campbell’s research were obtained from Italy. According to Campbell and Alberto Sbacchi (see below), there are still vast quantities of “classified information” across Italy dealing with the war.

In a recent lecture held to promote his forthcoming book, Campbell pointed to the great efforts that went to conceal the historical records in Italy dealing with the 19 February 1937 massacre of Addis Ababa.  Thanks to the courageous efforts of both Italian and Ethiopian scholars to preserve written documents there are hundreds of thousands of letters, memos, blueprints, orders, bills, speeches, articles, memoirs, and confessions.

Many accounts from survivors, eyewitness testimonies, were published in Amharic books written just after the war. Unfortunately these books had short-print runs so are now rare and difficult to find. Fortunately the British Library possesses a number of these printed books which deserve renewed attention. The following selection of books held in library, provide an account of the massacre witnessed  by Ethiopians. 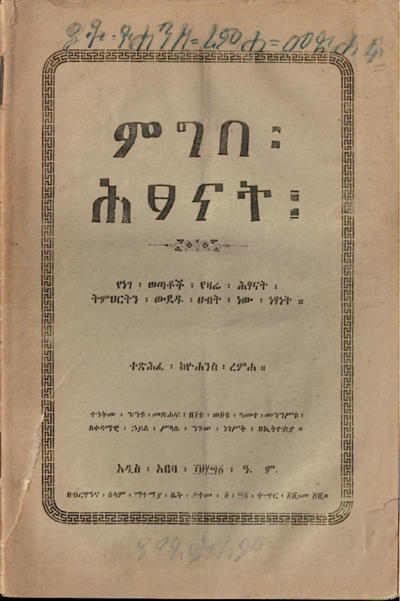 Megba Ḥeṡānāt (1948). On advice and moral guidance for children, e.g on “respecting one’s parents, obligation to the country”, etc. However, pages 27 to 44 contain letters the author (Yoḥanes  Rameḥa) wrote to noted Ethiopian patriots during the Italo-Ethiopian war. For example letters addressed to Ras Abebe Aregai, Dejjach Geresu Duki, Kabada Bezunesh and others.  The book is also signed by the author (British Library ORB 30/7857) 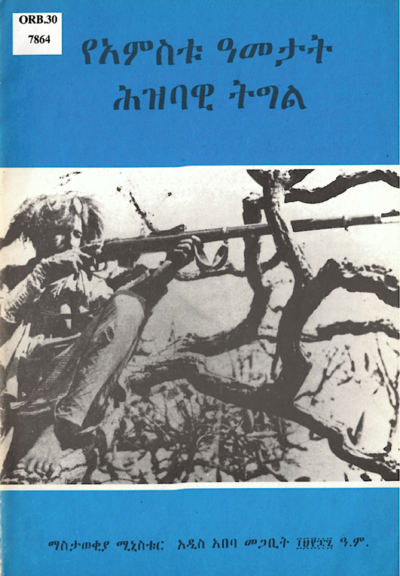 Ya-'Amesetu ʻāmatāte Ḥezebāwi Tegele “The five years of people’s struggle”. On the  Italo-Ethiopian War; "the massacre of Debre Libanos". Pamphlet published in 1974 by the Ministry of Information on the occasion of the anniversary of liberation (British Library ORB 30/7864) 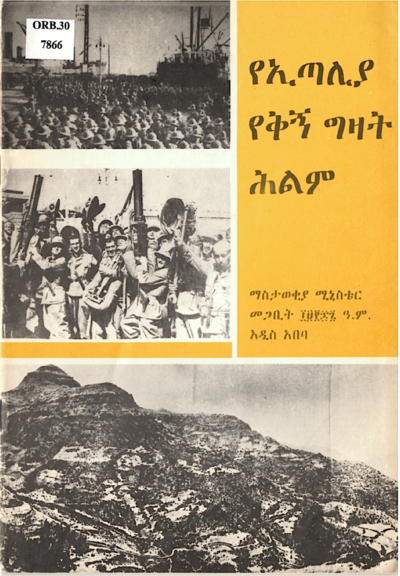 Ya-'Iṭāliyā Ya-Qeñe Gezāt Ḥelem “Italy’s Colonial Dream” (1974). On the Italo-Ethiopian War. Pamphlet published by the Ministry of Informationon the occasion of the anniversary of liberation (British Library ORB 30/7866) 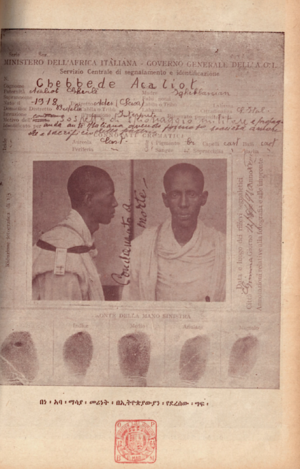 Tebé 'Akesume Manu' Aneta? “Axum says, ‘Who are you?ʼ”(1959). An account of the history of foreign invasions of Ethiopia, up to the Italo-Ethiopian war of 1935 and on the history and development of the Ethiopic (Ge’ez ) alphabet (British Library 754. uu. 25)

Posted by Ursula Sims-Williams at 6:07 PM

Eyob Derillo’s commendable contribution to the Asian and African Studies blog- Massacre of 30,000 Ethiopians in Addis Ababa by Italian Fascists on 19th February 1937 brings to light one of the darkest periods in the history of that ancient country. Despite Italy’s consorted effort in covering up evidence of the war crime Derillo’s article points to alternative resource materials that provide witness for that incalculable mass destruction. Availability of such documented materials at the British Library opens up a golden opportunity for researchers interested in this subject. The documented information would provide Ethiopians who are the direct victims of the war crime to hold Italian government to account for the genocide they committed on innocent citizens in the country. Derillo is encouraged to keep up with his encouraging initiative on this front.
Commented by:
Belay Gessesse, D.Ph, MRSH