In Theravada Buddhism, 'Buddha' refers to one who has become enlightened through their own efforts and insight. A Buddha is someone who has realized the enlightenment that ends the cycle of birth and death and which brings liberation from suffering. In the Pali canon, it is stated that Buddhas have appeared in the past and will also appear in the future. There were also numerous enlightened Buddhas who arose in earlier world-cycles and who preached the very same Dhamma that gives deliverance from suffering and death to all mature beings. The names of these 28 Buddhas are religiously preserved by Buddhists, together with their age, their stature, the names of the trees under which they obtained Enlightenment, their country, and the names of their father and mother. They all have two chief disciples to assist them in their mission. Every Buddha has always obtained the supreme intelligence under the shadow of a certain tree. 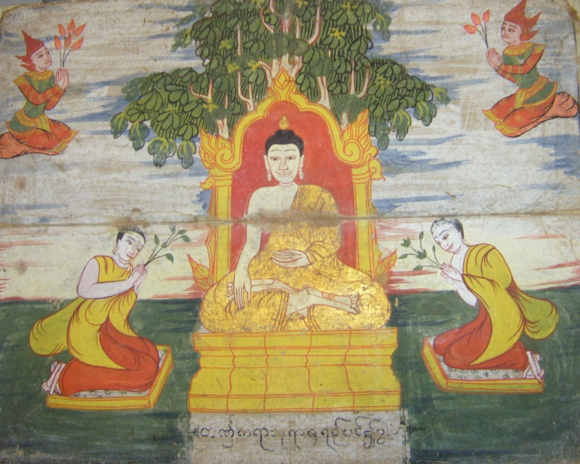 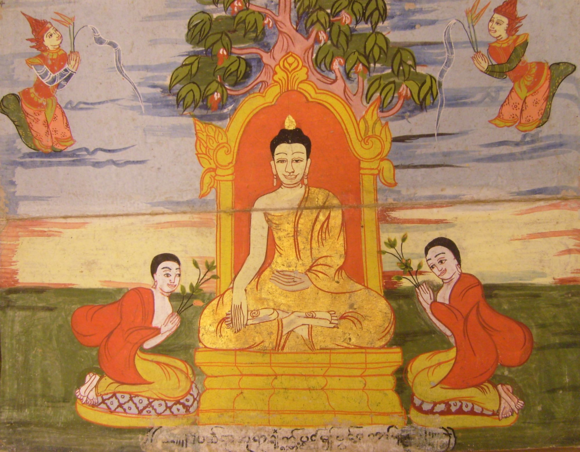 Dīpaṅkara Buddha was born as a son of King Sudeva and Queen Sumedhā in the city of Rāmāvatī. Prince Dīpaṅkara married princess Paduma and had a son named Usabhakkhandā. He attained Enlightenment under a Pipphali tree. He preached his first sermon at Nandarāma at Sirighara. Sumaṅgala and Tissa were his chief disciples. He gave niyatha vivarana (prediction of future Buddhahood) to the Ascetic Sumedha. 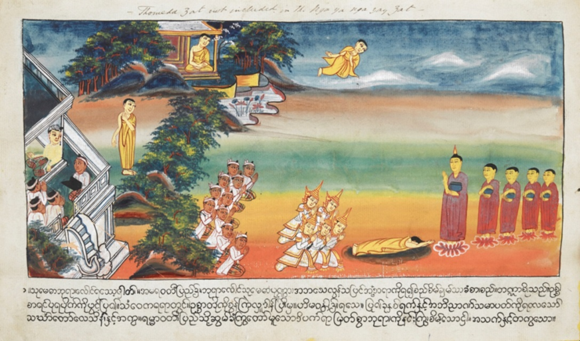 Bodhisitta Sumedha was born as a son to a Brahmin family in the city of Amaravati. After the death of his parents he thought about how his parents were not able to take their wealth with them beyond death. Therefore Sumedha gave away his wealth in alms in order to obtain the merit of the deeds, which could follow him after death. Then he went to the forest to become a hermit to seek merit. When Dipankara Buddha (a Buddha who had reached enlightenment aeons before Gautama, the historical Buddha) followed by His disciples came to the city of Ramma, people were cleaning the road on which he would walk. Sumeda took responsibility for one part of the muddy road, but he was unable to finish the work by the time the Buddha arrived, and the road was still full of mud. He therefore laid himself down on the road for the Buddha to walk upon. Dīpankara Buddha foretold that Sumedha would become a Buddha named Gautama in the ages of the future.

Gautama Buddha’s predecessors in the present world-cycle were Kakusandha, Koṇāgamana and Kassapa. These four Buddhas have already performed their great task. According to Buddhist scripture, Metteyya will be a successor of Gautama who will appear on Earth, attain enlightenment, and teach Dhamma. 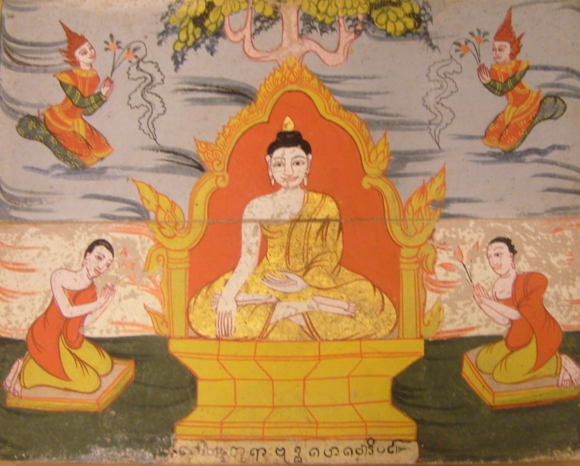 Gautama Buddha is the fourth and current Buddha of the present kalpa. He was born as a son of King Suddhodana and Queen Mahamaya in the city of Kapilavatthu. Prince Siddhatta Gautama married princess Yasodhayā and had a son named Rāhula. Prince Siddhatta finally arose fully enlightened as Gautama Buddha under the shade of the Peepal Bodhi tree which grew up spontaneously at the very moment he was born. Kolita and Upatissa were his chief disciples to assist him in his mission. He delivered his first sermon Dhammacakkappavattana Sutta in a deer park at Benares. The Buddha spent the rest of his life teaching Dhamma (the path of righteousness). His teaching was quite practical, as he never taught what he himself had not seen and known. In his eightieth year when he was in Kusinara, he had a severe attack of dysentery. Buddha consoled Ananda who was weeping, and then called his disciples together and addressed them to work on their salvation with diligence. Then he entered Parinirvana, from which there is no return.

All these 28 Buddhas were born into royal families or rich Brahmin families. When they had seen the four signs - an old man, a sick man, a corpse, and an ascetic - they renounced worldly life and left home. They engaged in meditation on mindfulness until they attained Enlightenment. At the request of God Brahma, they preached their first sermon to those who followed them.

The auspicious ceremony of Buddha Puja is held to pay homage to the 28 Buddhas who were enlightened and who taught Dhamma in different times. This practice is to remind Buddhists to strengthen their devotion, and many Buddhists also pay homage to the future Buddha, Metteyya.

Posted by Annabel Gallop at 1:15 PM