A superlative exhibition Sultans of Deccan India opened at the Metropolitan Museum in New York in April with an important accompanying catalogue (Haidar and Sardar 2015).  The arts of the Deccan (upland peninsular India) are among the rarest survivals from Muslim India and the exhibition concentrated on its greatest period, namely 1500-1700, so that the quality of the exhibits was uniformly high.  The three major sultanates emerged from the earlier Bahmanid kingdom around 1490 and survived until conquered by the Mughals in the 17th century, when most of their paintings and manuscripts seem to have perished. The British Library has an outstanding collection of this rare material and several of the key pieces from it were lent to the exhibition.

Chief among them perhaps is that rarest of all survivals, an illustrated Deccani manuscript from the 16th century (Add. 16880).  This is the Pem-nem, a Sufi romance in Dakhni Urdu written by Hasan Manju Khalji under the pen name of Hans, and dedicated to that great patron of the arts, Sultan Ibrahim ‘Adil Shah II of Bijapur (r. 1580-1627) in 999/1590-91 (an unfortunate typo in the New York catalogue (no. 29) gives the date as 990/1590-91).   This seems to be both the autograph and the only known copy of the text.   Three campaigns of illustration can be discerned in the manuscript in three varying styles over perhaps a period of 20 years. 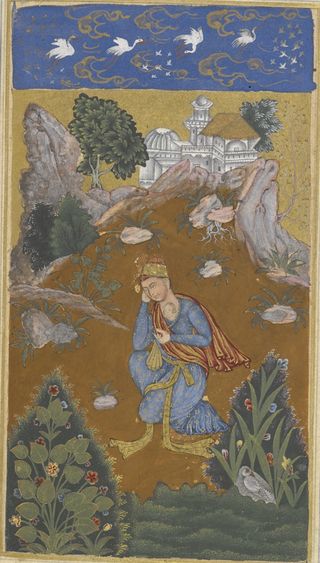 The story concerns Prince Shahji of Kuldip and his love for Mahji, a princess from Sangaldip, a love so ingrained in the prince that in a striking visual metaphor the beloved’s portrait is always present painted on his heart. 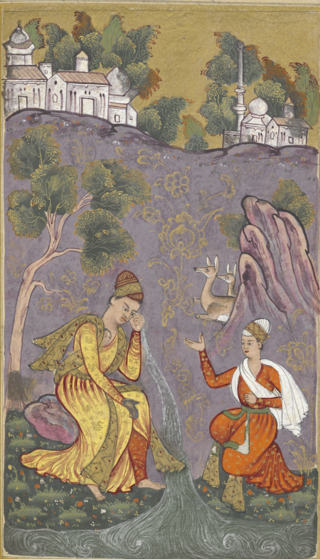 Having found his beloved, he believes that she is only a reflection of the ideal image that he has borne on his heart and he rejects her. 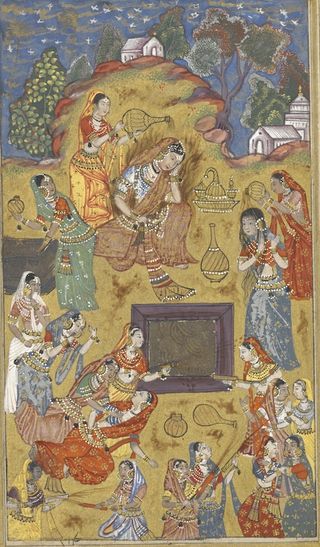 They separate each to a year of mourning and reflection, but eventually Shahji comes to realise that she is the true beloved not an idealised image and the two are reunited in wedlock. 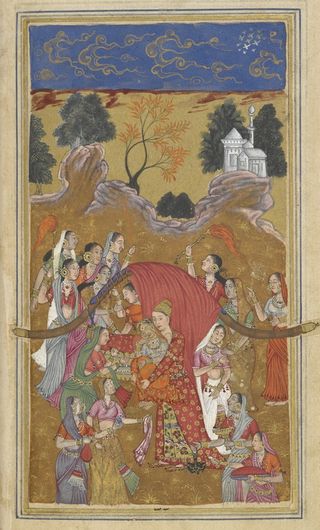 A full account of the story and its meaning along with illustrations of all the miniatures is given in a paper by Deborah Hutton (2011).  The tale is typical of the Prem kahani variety of Indian Sufi literature in being a metaphorical account of the search of the adept for God and in this instance not realising it when he has found it. 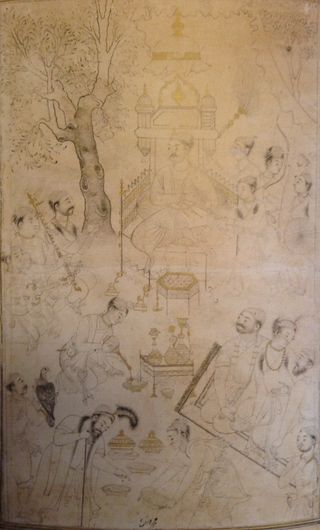 Among the greatest rarities of Deccani art are drawings or paintings from the third of the successor states to the Bahmanid kingdom, that of Ahmadnagar.  The British Library is fortunate in possessing a masterful drawing of an enthroned ruler in a garden enjoying an al fresco picnic (Add.Or.3004, Haidar and Sarkar no. 17).  The sultan is gazing fixedly at the musicians to his right, while abstractedly accepting pan from one of his pages.  Others listen to the music or supervise the preparation of food and wine.  The hawk and the bow seem more pictorial accessories than employed on a hunting expedition, suggesting perhaps the drawing is a study of different groupings rather than a finished composition.  The central grouping of the ruler and the page is closely linked to the great contemporary painting in the Bibliothèque Nationale showing an Ahmadnagar ruler again possibly Burhan II being offered pan by a page (ibid., no. 14).  This artist’s technique is wonderfully fluent in his calligraphic, expressive lines and his use of stippling and shading.  Influence from Mughal art has been suggested as a key element in his style, perhaps when Burhan was a refugee at the Mughal court from 1585.   The influence however comes from the early Akbari style of the early portraits and the Hamzanama (in train 1564-77).  More remarkable still are the pronounced Hindu elements of the style such as the vestiges of the projecting further eye of mediaeval Indian painting, the eyelashes protruding into space, the continued use of the Hindu full-profile portraiture tradition and the totally Hindu pose of the Sultan whose legs are arranged on his throne in the classic padmasana posture.   All of this suggests an artist tradition plucked from Vijayanagar after the fall of that Hindu empire to the combined Deccan sultans in 1564.

More paintings survive from Bijapur at this time than from Ahmadnagar and Golconda, all commissioned under the cultured rule of Ibrahim ‘Adil Shah.  One of his major artists, his name unknown, was a superlative portraitist.  He was responsible for another of the Library’s loans to New York, a portrait of a mullah wearing a distinctive turban wrapped round a red cap and an undyed shawl over this shoulders (ibid., no. 41).  The mullah’s upright bearing, staff and book seem the very embodiments of rigid orthodoxy but his keen and engaged gaze suggests an intelligent and enquiring mind.   He would have needed it in Ibrahim’s court, as the Sultan’s writings and images indicate an open mind towards Hinduism being devoted to Sarasvati, the goddess of music and learning.   The sternness of the portrait is relieved by the delightful touches of magical, all blue irises rising near his feet and two partridges busy hunting for food. 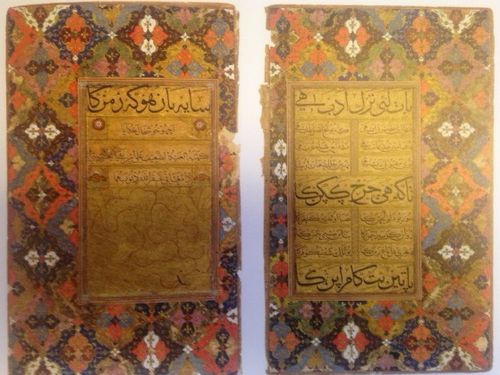 Finally also lent to New York were four folios of a spectacularly illuminated manuscript (Or. 13533, ibid., no. 61) of a qasida or panaegyric by Mullah Nusrati, the court poet of Bijapur under Sultan ‘Ali ‘Adil Shah II (r. 1656-72).  The qasida is in praise of Sultan ‘Abdallah Qutb Shah of Golconda (r. 1626-72).  Although Bijapur and Golconda were often inimically disposed towards each other, amity descended for a while after the marriage in 1633 of the Golconda Sultan’s sister, Khadija Sultana, to Sultan Muhammad ‘Adil Shah of Bijapur (r. 1627-56), and this apparently early work of Nusrati may reflect this state of affairs.  Every page is elegantly calligraphed by ‘Ali ibn Naqi al-Din Husaini against a gold ground and illuminated with cartouches, lozenges or boldly drawn flowers in brilliant colours in the typically Deccani palette of chocolate, lilac, pink and green.   Naqi al-Din was the famous calligrapher whose name is signed several times on the Ibrahim Rauza, the exquisite tomb of Ibrahim ‘Adil Shah built ca. 1627-35.

Additional blogs of interest:
Rare portrait of Iklas Khan, the African Prime Minister of Bijapur, acquired by the British Library

An Album of Maratha and Deccani Paintings