The British Library has arranged a free trial of the online version of the JapanTimes Archives covering the years 1897-2013 .  The trial, which runs until 11 July 2015, allows users onsite in British Library reading rooms at St Pancras and Boston Spa to search the database from BL computer terminals.

Founded in 1897 The Japan Times is Japan’s oldest extant English-language newspaper.  It was launched on 22 March of that year by Zumoto Motosada 頭本 元貞 (1862−1943) and Yamada Sueji 山田季治 (1848−1916) with the backing of the leading politician Itō Hirobumi 伊藤博文 and the support of educator Fukuzawa Yukichi 福沢諭吉.  The intention was to provide the Japanese public with news and discussion in English, with the aim of encouraging greater awareness of international affairs and also to explain Japan's position on global issues.  Several English newspapers had been published in Japan since the 1860s, including a previous Japan Times (1865-1870) but they had all been founded and run by Westerners and were aimed primarily at overseas residents in Japan.

The Japan Times Archives allows full-text searching of issues from March 1897 to December 2013 giving access to a information on a wide variety of topics and will be of use to researchers in a broad range of disciplines.

The free trial also covers access to the online version of the Japan Times covering the period from 1999 to the most current issue. 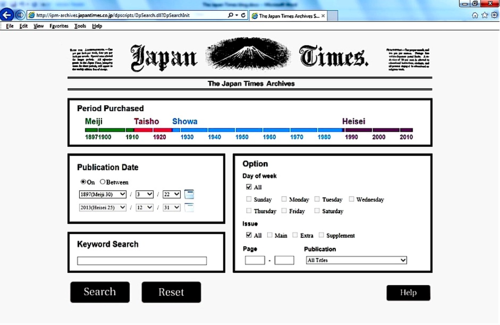 User feedback is welcomed and will be used to determine the business case for taking out a subscription to this electronic resource. Please contact me by email (hamish.todd@bl.uk) with your views.

Posted by Ursula Sims-Williams at 8:03 AM