The archaeology of a manuscript: the Khamsah of Khvaju Kirmani

For an art historian, one of the most exciting things in working with manuscripts is having the opportunity to examine a masterpiece firsthand. High-quality digital reproduction tells us much, and it is to the credit of the BL that they have digitized so many of their masterpieces, including one that I have been working on: ms. Add. 18113, a copy of three poems by Khvaju Kirmani penned by Mir Ali b. Ilyas in 796/1396. (See Ursula Sims-William’s post of 1 August 2013 “An illustrated 14th century Khamsah by Khvaju Kirmani")

But examining the physical manuscript can tell us more. For that reason I was especially grateful that Ursula Sims-Williams, Curator of Iranian Collections, arranged for three of us—my husband Jonathan Bloom, a specialist in Islamic paper; Cheryl Porter, a conservator specializing in pigments; and me—to examine the manuscript firsthand in the conservation laboratory. 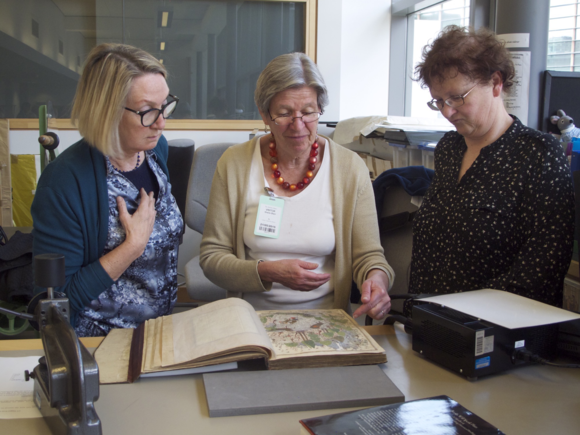 More than 600 years old, the manuscript still holds many secrets. The mystery I wanted to investigate was how the paintings were combined with the text. I hoped to confirm some hypotheses I had broached in my recent book, Text and Image in Medieval Persian Art (Edinburgh University Press, 2014).

All of the folios in the manuscript are composite, that is, they are assembled with two different sheets of paper: a thinner white paper in the center and a heavier buff paper for the frame. This is clear even when looking at the manuscript on-line (Add.18113). But looking at the folios through transmitted light shows that these pages were assembled in two different ways. The simplest method, used for all text folios, was simply to insert the rectangular block with the four columns of text into the frame like a window. Hence, I called them framed folios. 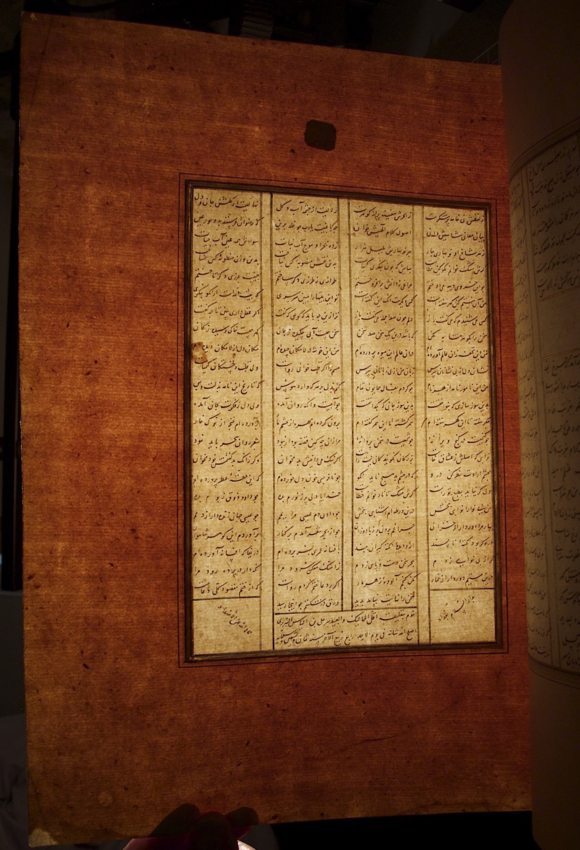 Fig.2. Folio 49 seen through transmitted light: a framed folio with the colophon to Humay and Humayun on the front side and a blank back. Photograph © Jonathan Bloom

This straightforward method was also used for to assemble one illustrated folio: folio 64, with the painting of ʿAli slaying the infidel on the back. 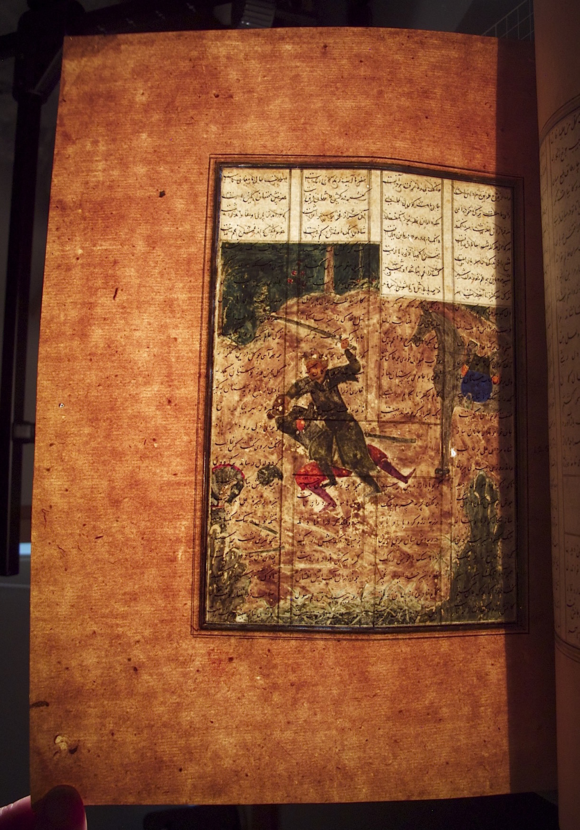 Fig. 3. Folio 64 seen through transmitted light: a framed folio with text on the front and ʿAli slays the infidel on the back. Photograph © Jonathan Bloom

The painting occupied the same space as the columns of text, so it was easy just to use the same method of inserting a rectangular block into the frame.

But the other eight illustrations in the manuscript are different. They are much bigger, spreading well beyond the written surface on the other side. So it was impossible just to assemble them by inserting them like a window into a frame. How were they combined with the border? The reason it was important to know is that it has been suggested that the paintings, or at least some of them, had been made for a different manuscript and were pasted into the text.

I disagree. I think that the text and the paintings are integral in this manuscript, and our recent investigations confirmed what I had originally suggested: that the paintings were executed directly onto the same white paper used for copying the text and that at a later date—when someone decided to reframe the manuscript within heavier buff borders—the illustrated folios were simply pasted onto (not inserted into) the borders. I called these laminated folios.

I had made this suggestion following my earlier examination of the manuscript in 2011 with BL conservator David Jacobs. Looking at the illustrated folios such as folio 45 with the painting of the Celebrations for the consummation of Humay’s marriage to Humayun under strong transmitted light showed three areas of different opacity: a lighter area in the center, the buff frame visible at the outermost edge, and a third even darker area between the two. 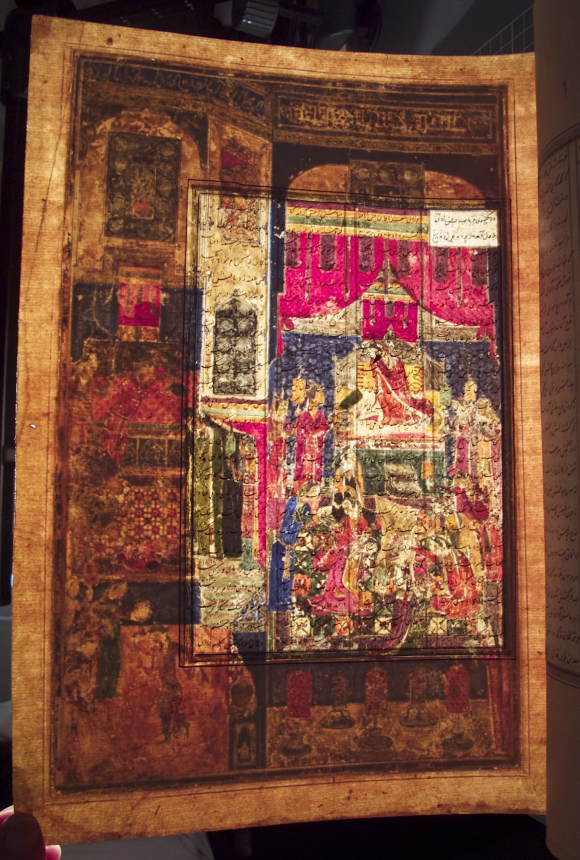 Fig. 4. Folio 45 seen through transmitted light: a laminated folio with text on the front and Celebrations for the consummation of Humay’s marriage to Humayun on the back. Photograph © Jonathan Bloom

I suggested that the third area was darker because it was thicker, as it was a laminate of the original white paper and the buff frame.

David Jacobs suggested that I might be able to confirm my suggestion by measuring the folios with a micrometer, and that is exactly what Ursula Sims-Williams arranged for us to do. We measured several different folios in several different places and found three different thicknesses on illustrated folios that had the paintings laminated to the frame.

The white paper in the center was the thinnest. Regular text folios averaged 0.12 mm, although individual measurements varied from 0.11 to 0.16 mm, undoubtedly due to variations in the handmade paper and the difficulties in measuring a folio that was still in a bound manuscript.

The white paper in the illustrated folios was a little thicker because one side also had paint, not just inked text.  For example, we measured folio 23 with Humay and Humayun in combat in several places in the center of the painting where there was text on the other side: under the trees, beneath the horses, and between the horses. Fig. 5. Folio 23 seen through transmitted light, with Humay and Humayun in combat on the front and text on the back. Photograph © Jonathan Bloom

The buff paper used for the frame was thicker. On both text and illustrated folios, it averaged 0.18 mm, with individual measurements ranging between 0.15 and 0.22 mm.

Measuring with a micrometer thus confirmed my hypothesis that the paintings were integral with the original manuscript and that the large ones on the original white paper had later been laminated onto a heavier buff frame.

Such a hypothesis about the origin of the illustrations can also be confirmed by looking at the layout of the paintings on the laminated folios through transmitted light, for the composition is directly related to the columnar rulings set out for the text on the other side. This is especially true of the architectural scenes. For example, looking at folio 45 through transmitted light (fig. 4) shows that the architecture corresponds exactly to the text columns. Humayun’s palace with its curtained canopy occupies three columns; the doorway with the servant occupies the fourth; and Humay’s palace lies beyond the written area. The dimensions correspond horizontally as well. The valance above the curtain in Humayun’s palace marks the top of the written area on the front. The carpet below the enthroned princess marks the bottom of the written area. Paintings like this one must have been composed directly on the surface of the ruled folio, because the painter, in this case Junayd who signed his work in the stucco grille just above the valance, laid out his composition directly in accordance with the ruled text.

There is no question, therefore, that close first-hand examination of the manuscript shows that the text and paintings in this superb copy of Khvaju Kirmani’s poems dated 796/1396 are contemporary and that the illustrations were painted onto folios that had already had the text transcribed onto them. I thank the staff of the British Library for making it possible for me to confirm my hypothesis.