The Life of the Buddha in Thai manuscript art

In contrast to Thai mural painting and sculpture, depictions of Gautama Buddha are relatively rare in Thai manuscript art. Numerous Buddhist temples in Thailand are famous for their lavish mural paintings illustrating the milestones in the life of Gautama Buddha, often beginning with his former existence as a Bodhisatta (Buddha-to-be) in Tusita heaven, or with the wedding of his parents, and ending with the distribution of his physical remains.

Although the majority of Thai manuscript paintings are dedicated to Buddhist topics, instead of Gautama Buddha’s life these illustrations often highlight his former incarnations, particularly the last Ten Birth Tales, and the legend of the monk Phra Malai, or other subjects like the Buddhist cosmology, funeral ceremonies and meditation practices. However, there are some remarkable representations of Gautama Buddha in rare Thai manuscripts, and sometimes these can be found in a rather unexpected context. 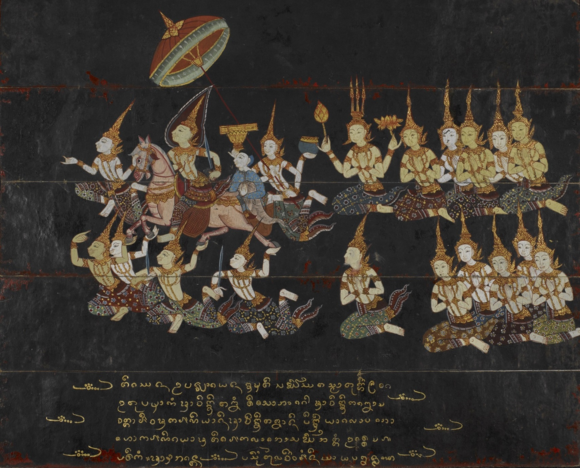 The most lavishly painted scene from the Life of the Buddha in the British Library’s Thai, Lao and Cambodian collection is this scene called The Great Departure, contained in a northern Thai (Lanna) Kammavaca manuscript from the 19th century. Prince Siddharta, after having learned about the worldly sufferings and the inevitability of death, decided to abandon his luxurious life and to become an ascetic as a result of his great compassion for human suffering. British Library, Or.14025, ff. 13-14

While the manuscript shown above was created for use by Buddhist monks on the occasion of the ordination of novices and new monks, the following book containing a collection of drawings and paintings on European paper may have been copied from one or more older manuscripts to serve as an artist’s manual. It includes numerous drawings from the Ramakien (the Thai version of the Ramayana) as well as a set of 23 ink-and-colour paintings illustrating the Ten Birth Tales and the Life of the Buddha. 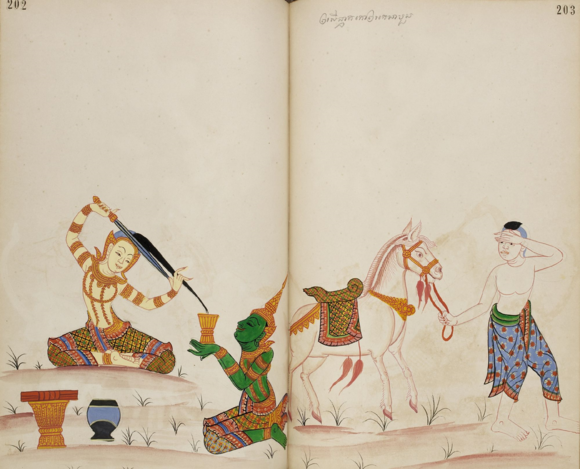 After leaving his family and home, Siddharta arrived at the Anoma river where he took off his clothes and gave them to his servant and charioteer Channa, who took them back to the palace with a message for Siddharta’s relatives. Then he cut off his hair which Sakka (Indra) collected and placed in Tavatimsa heaven. British Library, Or.14859, ff. 202-203

Another rare manuscript of a smaller, almost square folding book format was used by fortune-tellers in southern Thailand. Some men specialising in fortune-telling and divination were former monks and had acquired a good knowledge of the Buddhist doctrine. It comes as no surprise that the small book combines Buddhist topics, like Jatakas and cosmology, with folk legends and indigenous beliefs. Using the text and picture on a randomly chosen page, the fortune-teller would be able to interpret the fate of a person and give advice on how to avoid bad luck. Very often the advice would point towards making merit or following the Buddhist precepts for lay people. 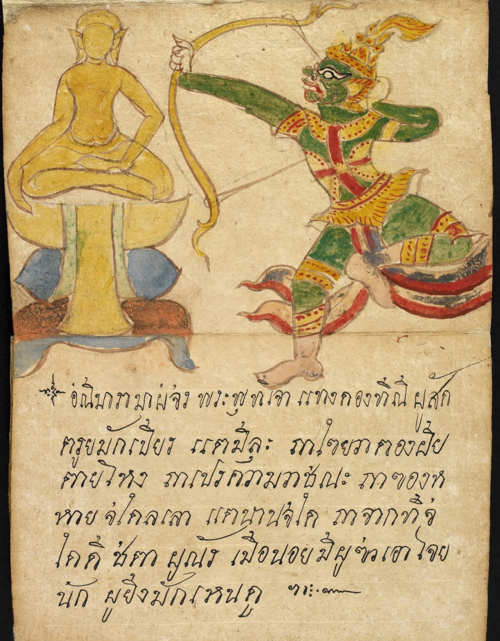 In the southern Thai dialect this fortune-telling book from the 19th century is called Satra. The illustrations are all rather simple, but highly expressive. The image above shows the scene where Mara, the personification of evil and death, threatens and attacks Siddharta while he was sitting in meditation, touching the ground with his right hand (bhumisparsa or earth-touching mudra). British Library, Or.16482, f. 3 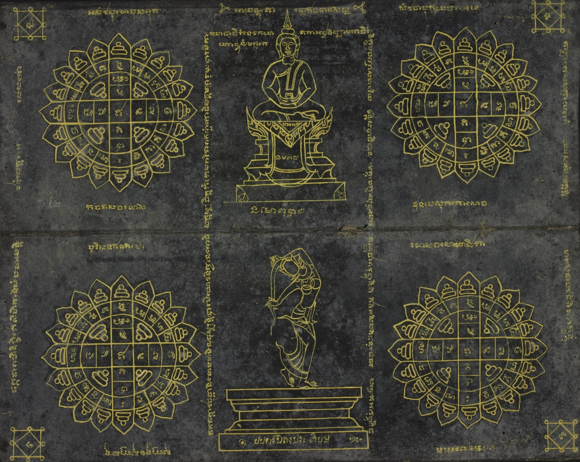 Another unexpected illustration of the same scene, Siddharta under attack from Mara and his army, can be found in a manuscript from central Thailand containing mantra and designs for protective diagrams (yantra). Mara cannot be seen in this drawing in yellow gamboge ink, but underneath the picture of the meditating Siddharta one can see the earth goddess Nang Thorani exercising her supernatural powers by wringing a great flood out of her long hair, thus sweeping away Mara and his army. British Library, Or.15596, f. 17 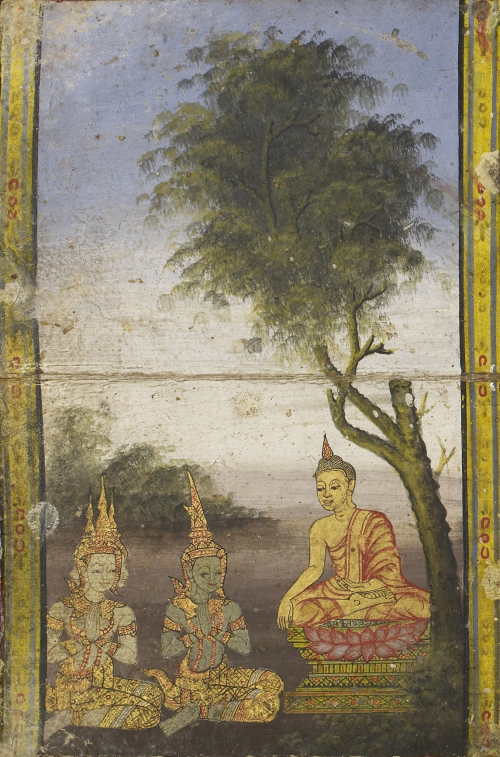 Once Siddharta was free from all disturbances and distractions, he was able to attain Enlightenment on the full moon day of Visakha. By touching the earth he called upon the gods, here represented by Sakka and Brahma, to witness his enlightenment. British Library, Or.16101, fol. 2

A book of Thai characters, which may have been produced on request of a Western traveller in 19th century Siam, contains ink coloured paintings of human figures representing various ethnic groups found in mainland Southeast Asia at the time, and of figures from Thai literature, particularly the Ramakien (Ramayana). Only on the first page there is a scene from the Life of the Buddha. 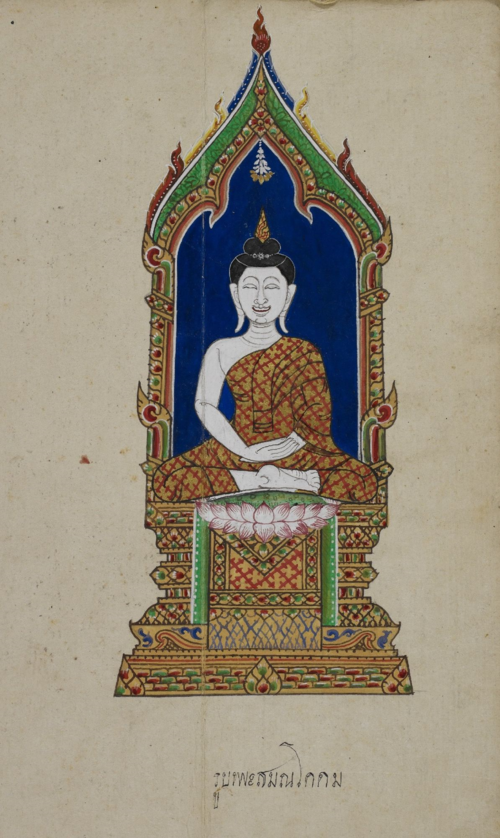 The weeks after his enlightenment the Buddha spent in standing, walking and sitting meditation, thus recollecting his former births and the Four Noble Truths. During the fourth week in seated meditation, devas descended from the heavens to build a jewelled pavilion around him. British Library, Or.14229, f. 1 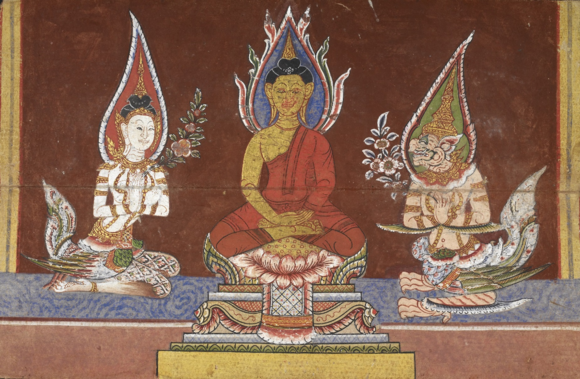 This illustration is from a Thai folding book in Khom (Khmer) script from the 19th century that contains a collection of extracts from the Pali canon. The painting shows the Buddha in contemplation while two creatures from the heavenly Himavanta forest kneel by his side, showing their respect. British Library, Or.15246, f. 16

Large illustrations covering one entire or more openings of a folding book like in the picture above are relatively rare. Most frequently we find a set of two smaller paintings touching the right and left edges of folding books with some text between them, as shown below.

This generously gilded set of paintings in a 19th century manuscript containing the legend of Phra Malai depict a scene of utmost rarity in Thai manuscript art - Gautama Buddha’s death that is mourned by his followers. On the right side we see Kassapa, one of Buddha’s closest disciples, who was travelling with a group of other monks. While resting under a tree, they encountered a man holding a gigantic flower over his head. They enquired about the meaning of this supernatural plant and the man informed them that he found it at the place where the Buddha had passed away and finally reached pari-nibbana. British Library, Or.14956, fol. 2