The story of Sinbad or the seven sages

One of our most colourful manuscripts, now on display in the Metropolitan Museum of Art’s current exhibition “Sultans of Deccan India 1500-1700,” is IO Islamic 3214, the only known copy of the story of Sindbad and the seven sages to be written in Persian verse. The story - not to be confused with Sindbad the sailor of the Arabian Nights - occurs in both Western and Eastern literature, but is believed to be of Iranian origin (Perry 1960) with links to a very ancient Graeco-Oriental tradition. 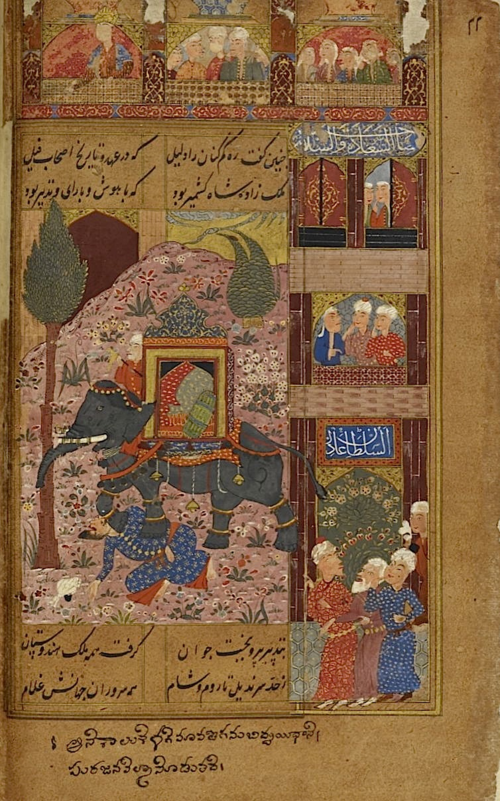 The story of the King of Kashmir whose elephant bolted despite three years’ training. The keeper, condemned to be trodden underfoot, escaped death by demonstrating the elephant’s obedience and attributing the mishap to a bad horoscope (BL IO Islamic 3214, f. 23v)

This version was composed in AH 776 (1374/75) at the request of an unnamed king and was based on an earlier version written in Persian prose. It is illustrated with 72 miniatures characterised by the use of vivid colours and innovative architectural detail, opening with double page portraits of King Solomon and Queen Sheba on facing pages  - a feature of many manuscripts of Iranian origin, particularly from 16th century Shiraz to which this manuscript owes many stylistic features. 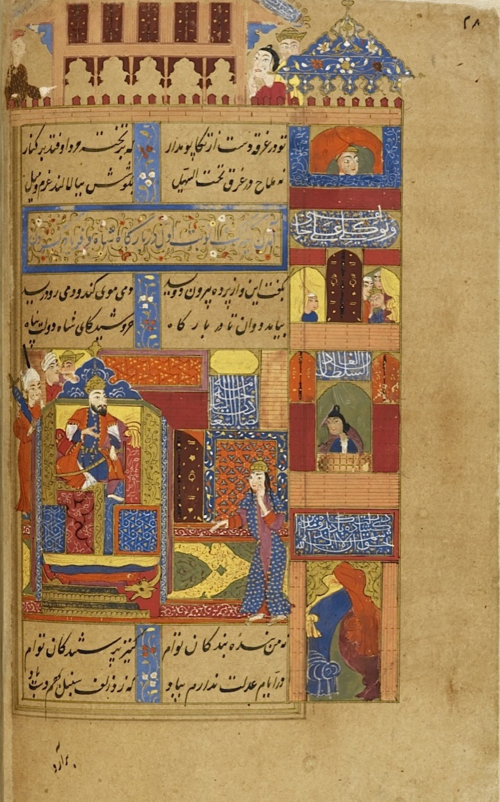 Set in an Indian context, the poem takes the form of many tales told within the frame of a single story. Commanded to remain silent for seven days by his teacher, Sindibad, the young prince is accused by one of his father’s concubines of having attempted to seduce her. He is condemned to death, but the king’s seven viziers take turns to delay the execution by telling stories illustrating women’s deceit. Each evening, however, their work is undone by the guilty concubine telling a contradictory story. After a week’s silence, the prince, now free to speak again, is exonerated and set free. The tale ends with the king’s abdication in favour of his son. Unfortunately because of a gap in the text, it is not clear whether the wicked woman is pardoned or punished! 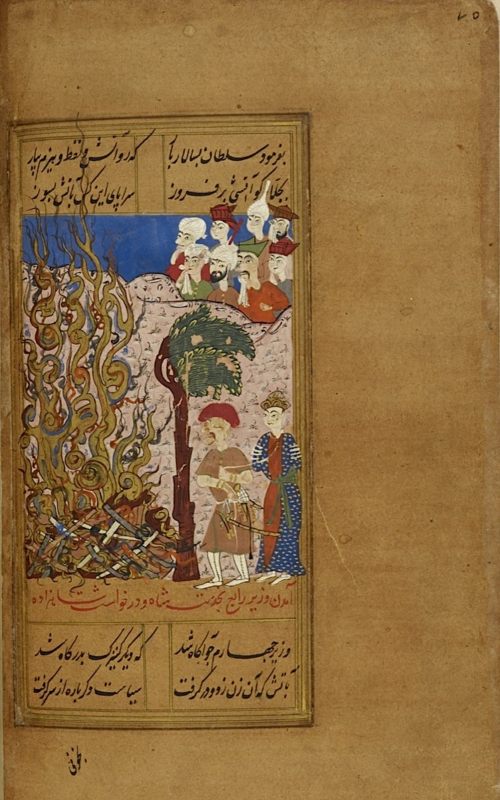 The history of our manuscript is a mystery in its own right! Almost certainly copied and illustrated in Golconda between 1575 and 1585 (Weinstein, p. 127), it unfortunately lacks a colophon, but folio 1r contains at least one abraded Qutbshahi seal impression. The popularity of the Sindbādnāmah is also attested, as Laura Weinstein notes (Haidar and Sardar, p. 203), by the existence of an especially commissioned copy (BL Or.255) of the better known Persian prose version by Muḥammad ibn ʻAlī al-Ẓahīrī al-Samarqandī, copied for Sulṭān Muḥammad Qutub Shāh (r. 1612-26) in Haidarabad in 1622. The illustrations as far as folio 23v also include captions in Kannada.  Presumably these were added afterwards since the first inscription occurs on what appears to be a later flyleaf at the beginning. At some point the volume was trimmed - some of the architectural details are missing from the illustrations - and numbered continuously in Arabic numerals - this despite several obviously missing leaves - on the verso of each folio. 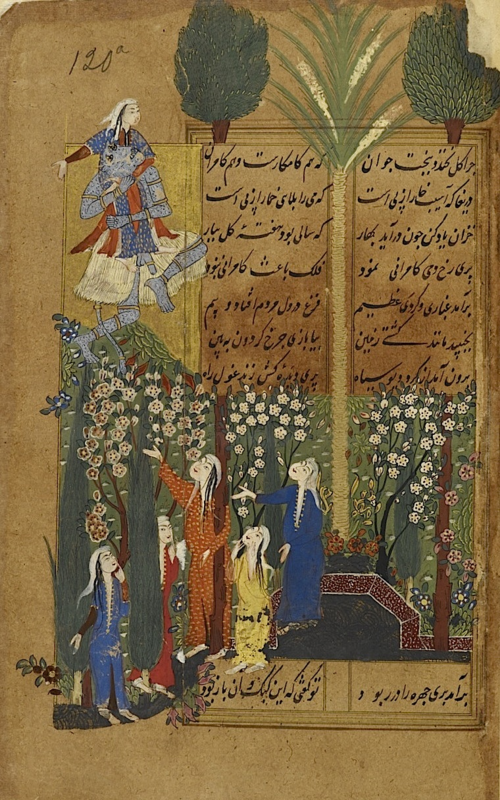 The prince’s tale: a black div abducts the daughter of the king of furthest Kashmir while visiting a  garden outside the city (BL IO Islamic 3241, f. 120r) 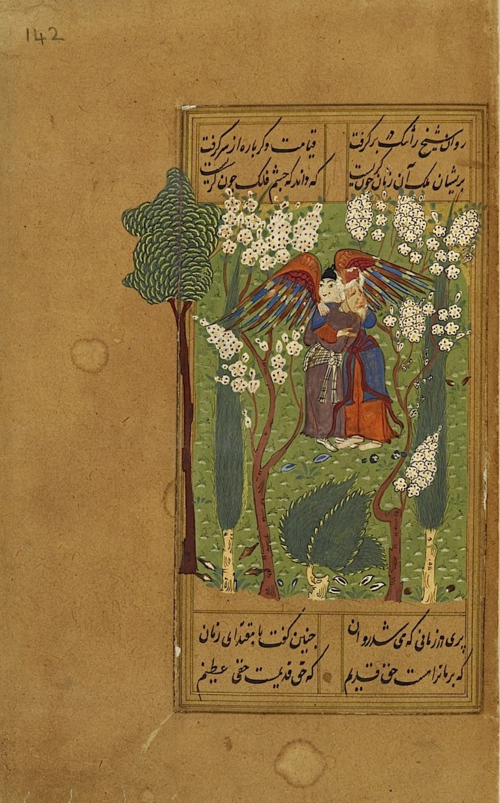 The story of the pari, who teaches the ascetic three ‘Great Names’, each of which, when uttered in an emergency will grant the ascetic’s wish (BL IO Islamic 3241, f. 142r)

It is not known exactly how the manuscript was acquired by the East India Company, but in 1841 the Scottish Persianist Forbes Falconer (1805-53) published a partial translation in three instalments in the Asiatic Journal in which he described it (Falconer, p.170) as a unique manuscript “in the collection at East-India House.” At that time readers were allowed to take manuscripts home for study and perhaps Falconer forgot to return it because in June 1857 it was purchased, according to another note, by one Edwin Greenwood “at an Old Book Stall for £1-0-0”. A later note by the then librarian H H Wilson, dated March 1859, describes this as “a curious fiction”, but considering that the East India Company seal on folio 1r has been deliberately erased, it seems likely that Edwin Greenwood’s story was correct and we can be grateful for him returning it! 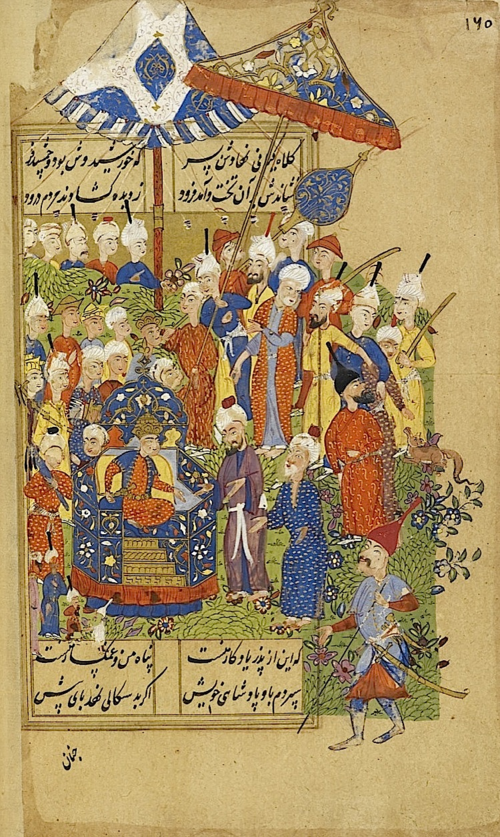 A happy ending: the prince assumes his father’s throne in the presence of viziers and courtiers (BL IO Islamic 3214, f. 165v)

The exhibition “Sultans of Deccan India 1500-1700” is open at the Metropolitan Museum of Art, New York, until July 26.

IO Islamic 3214 has been fully digitised and can be read on our Digital Manuscripts site (access via Digital Access to Persian Manuscripts).

Posted by Ursula Sims-Williams at 11:25 PM