In November 1714, three British merchants from the East India Company ship Borneo were granted permits to trade by the sultan of Banjar on the south coast of the island of Borneo, now known as Banjarmasin in present-day Indonesian Kalimantan. The issuing of trading permits was a common occurrence, but what was exceptional in this case was the form of the permit itself: a thin piece of gold stamped with the sultan’s seal, with a personalised inscription naming each of the three officers.

At this time the ruler of Banjar was Sultan Tahmidullah (r.1712-1747), and the presentation of the permits took place at his palace at Caytongee or Kayu Tangi, about a hundred miles upriver from the port of Banjarmasin. The occasion was described by Captain Daniel Beeckman in his travelogue, A voyage to the island of Borneo in the East-Indies, published in London in 1718:

‘He caus’d three Gold Plates to be made of the Form and Size here mark’d, of which he gave one to me, another to Mr. Swartz, and the third to Mr. Becher; and told us, that was a Token of the Friendship, and a Chop, or Grant of Trade, having the Stamp of his Great Seal on it; that on the producing it at our return, he would not only protect us, but grant us the liberty of Trade in any part of his Dominions; Then he wish’d us, in a hearty manner, a good Voyage, and a speedy Return. I have here inserted the Words that are on the Gold Chop, as also the English of them, as near as I can, viz. De ca Tawon Zeib, daen ca Boolon Dulcaidat, Eang Sultan Derre Negree Caytongee, dea Casse enee Chop pada anacooda Beeckman. That is, In the Year Zeib, and the Moon Dulcaidat, The Sultan of Caytongee gave this Chop to Captain Beeckman’ (Beeckman 1718: 110-111). 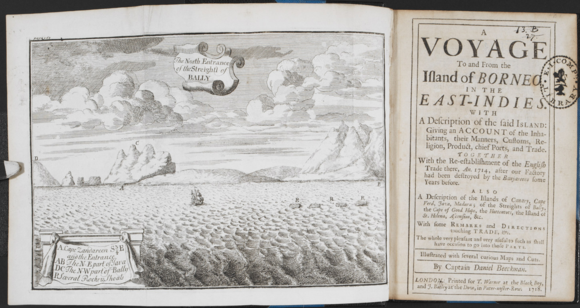 Hardly surprisingly, none of the original gold tokens is known to have survived. But tucked inside a manuscript volume of miscellanea in the British Library’s department of western manuscripts is a document with a tracing of the token granted to Bartholomew Swartz, supercargo of the Borneo. As part of the Harleian collection, this manuscript dates from before 1753, and was therefore probably drawn up not long after the return of the ship Borneo from the East Indies. The piece of paper is inscribed: 'The Contract with the Emperor of Borneo (in the East Indies). Mr. ... Swartz's Agent from the East India Comp. London. This was an agreement to settle & Trade or Commerce with full liberty to the Subjects of England or great Britain'. In the middle of the sheet of paper is a drawing of the token, which is labelled, 'This is on a gold plate, impressd. by the Emperor, almost as thinn as this paper, whereby it is plainly seen on the other side'. 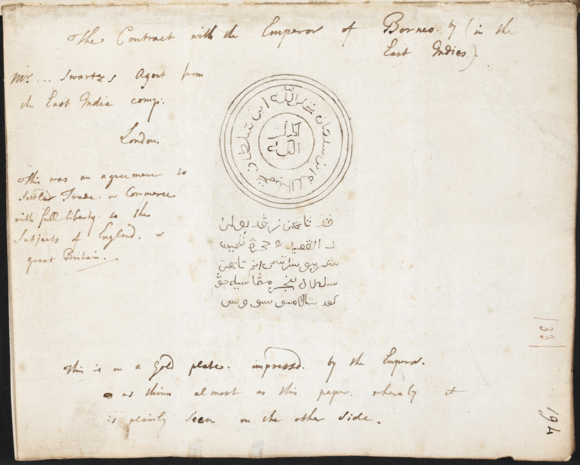 The outline of the original gold plate has been traced with a sharp implement, and the inscription on the seal and the token copied out in black ink. The scored outline shows that the gold plate was rectangular on the three lower sides but rounded at the top, and measured 87 mm high by 48 mm wide. Impressed at the top of the token was the round seal of the sultan, measuring 45 mm in diameter with a triple-ruled outline, with an inscription in the middle and in a border around the edge.

This drawing is doubly significant, not only as a record of a rare seal impressed in gold, but also because it depicts the oldest Islamic seal known from Borneo. In Malay seals, the main inscription giving the name of the seal owner is invariably located in the centre, while the border houses a secondary inscription, often religious in character. However, in this seal, the only logical way of reading the inscription is to proceed from the border inwards to the centre: Sultan Tahmidullah ibn Sultan Tahirullah ibn // al-Malik[?] Allah, ‘Sultan Tahmidullah, son of Sultan Tahidullah, son of // al-Malikullah’. [It is probably significant that the only other Malay seal known where the inscription should be read from the border inwards is also from Banjar.] 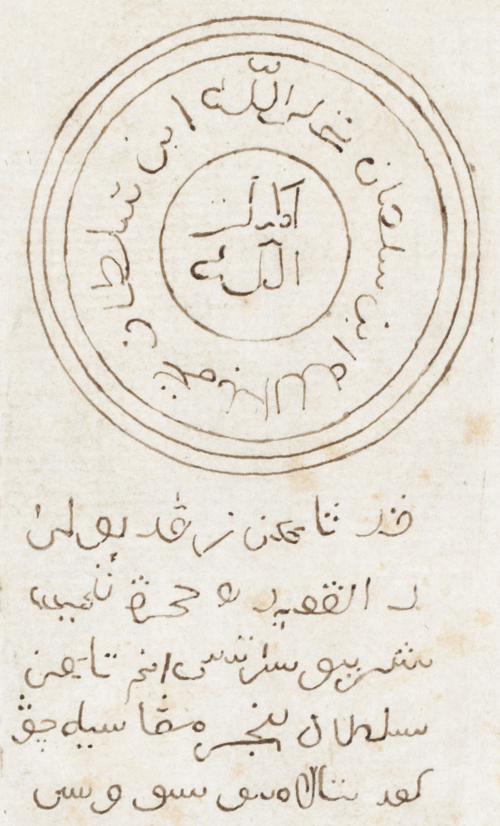 Underneath the seal impression, the gold plate was inscribed in Malay in Jawi script with the date and the name of the recipient: Pada tahun zai pada bulan Zulkaidah hijrat [a]l-nabi seribu seratus enam tahun, Sultan Banjar mengasih cap kepada Batalomu Suwas, ‘In the year Zai, the month Zulkaidah, the year of the migration of the Prophet one thousand one hundred and six, the Sultan of Banjar gave this seal to Bartholomew Swartz’. Although the date on this copy is given as Zulkaidah 1106 (June/July 1695) it should, without doubt, read Zulkaidah 11[2]6 (November/December 1714), which accords exactly with the dates of the Borneo’s visit to Banjar.

No other reference is known to trading permits from the Malay archipelago in the form of gold tokens, and another East India Company ship, Dragon, which visited Banjarmasin in 1746 during the reign of Sultan Tahmidullah's son, Tamjidullah (r.1746-1756), received more conventional trading permits, written on paper in Malay in very stylish Jawi calligraphy, and bearing the sultan's seal stamped in red wax. 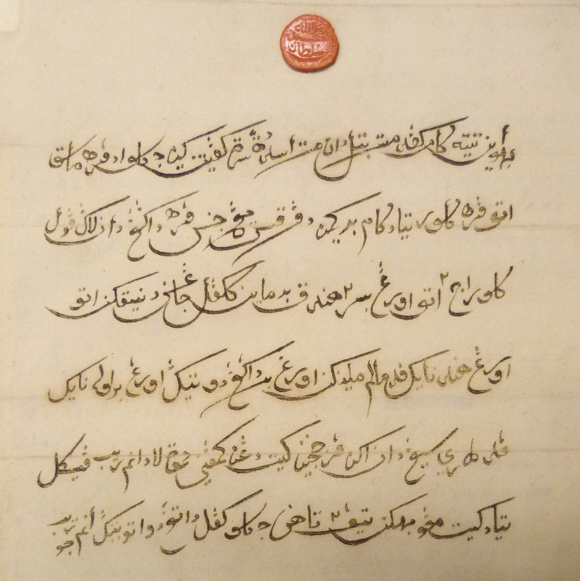 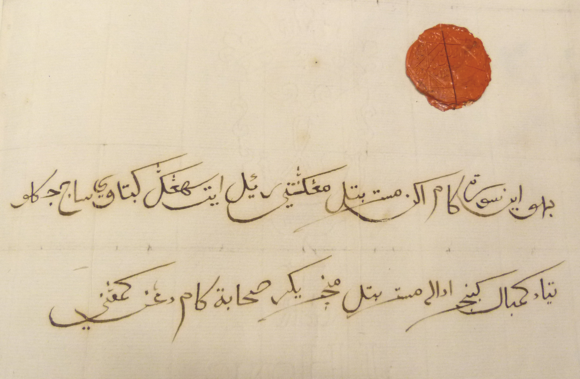 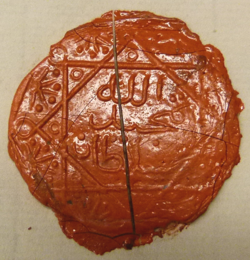 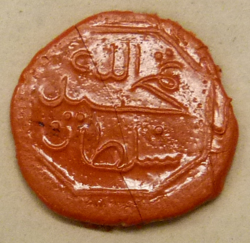 Two red wax seals bearing the name Sultan Tamjidullah, both inscribed from the bottom up so that the word Allah is elevated to the position of honour at the top of the seal. British Library, IOR L/Mar/324, f. 64r (left) and f. 65r (right).

With thanks to Richard Morel who discovered the two permits of 1746.

Posted by Annabel Gallop at 3:58 PM