There are many Burmese festivals throughout the year and most of them are related to Buddhism. The year begins with the month named Tagu (April), and ends with the month called Tabaung (March). The main festivals of Tagu are the Burmese New Year and the Thingyan water-throwing festival, which is held for four days in mid-April. The exact date and the precise time of the commencement and termination of Thingyan and New Year's Day are fixed through astrological calculations. Thingyan is a word derived from the Sanskrit sankranta meaning the end of the past year and the beginning of the new year. Many devout Buddhists initiate their sons and ordain them into the Buddhist order around the time of the water festival. Popular New Year activities include visiting monasteries with offerings for Buddhist monks to observe precepts, listening to dhamma talks and meditation. Another activity to usher in the New Year is the ceremonial bathing of Buddha images in scented water at homes or at pagodas.

The water pouring festival (Kason nyaung yei thun pwe) is held in the second month of the Burmese calendar, Kason (May). The full moon day of Kason is very significant for Buddhist people, and is called ‘Buddha Day’, because four cardinal events happened on this day: Dipinkara Buddha foretold that the hermit Thumeda would be re-born as the Buddha, Gotama; the Buddha was born; Gotama Buddha attained Enlightenment at the foot of the Bodhi tree; and the Buddha passed into Nirvana. On the 14th waxing day of Kason, a day before the full moon, people carry water pots and go to the pagoda to pour water at the sacred Bodhi tree. 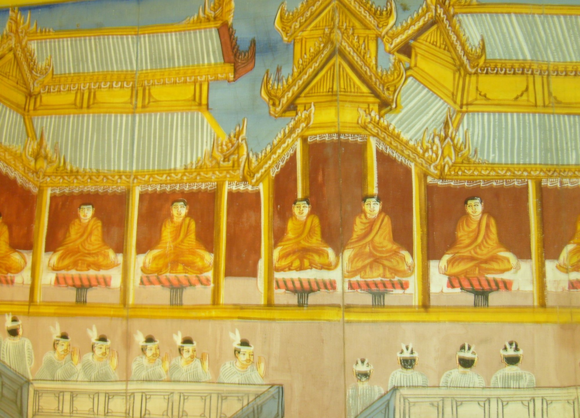 Nayun (June), the third month of the Burmese calendar, is when examinations are held for Buddhist monks in the recitation of Theravada Buddhist scriptures. Lay people bring various offerings including daily alms to the monks, who sit recitation tests on Buddha’s discourse. These examinations, in three levels, have been held since the days of the monarchy in Burma. On the full moon day of Nayun, the Buddha preached Mahasamaya sutta to human and celestial beings, and this day is therefore commemorated as ‘Mahasamaya Day’.

The Buddhist Lent, or Wa, takes place every year over three months from July to October. During this period Buddhist monks abstain from travelling, and devote themselves to religious duties in their own monasteries. People offer alms and Waso robes to gain meritorious deeds. As Waso (July) is a sacred month, ordination and novitiation ceremonies take place at the monasteries.  Novitiation is an important family custom and is considered a great privilege, and is also a meritorious deed for the person who gives himself into the Buddha’s Order. Once boys have reached the age of seven they are admitted as novices. When ordination ceremonies take place there must be an assembly of at least five senior monks agreeing to sponsor the ordination. The Waso full moon day is a very sacred day for Buddhist as it was the day on which the embryo Buddha Siddhatta was conceived, and also the day of the Great Renunciation and of the Great Delivering of the First Sermon, Dhammacakkappavattana Sutta. The full moon day of Waso is called Dhammacakya day.

Wagaung (August) is the month for the Mahā Dok festival (Alms-bowls festival), in which food is offered together with other requisites for monks. When the King of Kosala and all his people organised a ceremony for offering food to the Buddha and the Sanghas at the Jetavana Monastery, a man called Mahā Dok who was very poor and had never had a chance to do any deed of merit and his wife worked hard to save enough to offer food to a monk. Mahā Dok was very happy as the lot fell to him to offer alms to the Buddha.  He became a rich man, but spent his wealth in doing good deeds.  He was reborn in the celestial abode when his life ended.

Tawthalin (September) is the sixth month in Burmese calendar and the third month of the rainy season in Burma. The rain becomes less frequent, there is more sunshine and clearer skies, it becomes less windy and the surfaces of the rivers stay calm. Due to the favourable weather conditions, regatta festivals are traditionally held in this season. These regattas were not only occasions for royal pageantry but also for demonstrating the naval prowess of the armed forces. It remains one of the twelve monthly festivals in the Burmese calendar. The full moon day of Tawthalin is regarded as Kurudhamma or Pancasīla (five precepts) day.

The Bodhisatta, Dhanañjaya Korabya, king of Kururatha and his people observed the five precepts, Kurudhamma, and their country enjoyed good weather and good harvests, while the people lived peacefully and freed from diseases. King Kalinga of Dantapura's land, however, experienced drought and his people suffered from natural disasters. At Kalinga's request, King Dhanañjaya Korabya lent his state elephant, but the drought continued. Then King Kalinga found out about Kurudhamma which blessed the Bodhisatta and his people. After that he and his people practised the Kurudhamma, and the country of Dantapura became peace and prosperous too. British Library, Or. 4542B, ff. 147-152

The Thadingyut festival takes place on the full moon day of Thadingyut (October) to mark the end of the Buddhist Lent, which begins in the middle of Waso and ends in the middle of Thadingyut. The Thadingyut festival is celebrated with lights to commemorate when the Buddha preached the Abhidhamma to his mother, who was reborn again in heaven and returned from Tavatimsa heaven to the earth on the full moon night of Thadingyut. To mark this Abhidhamma day, lavish offerings are made to monks, and people pay homage to express their gratitude to parents, teachers and elders.

Tazaungmon (November) is the eighth month of the Burmese calendar.  One of the most common religious practices among Buddhists is merit making. When the Buddhist Lent ends monks are allowed to travel, and around this time many monks are in need of new robes. It is thus a special period for Buddhist people to do meritorious deeds, and people organise special offerings, Kathina, which begin on the first waning day of Thadingyut, the seventh month, and last till the full-moon day of the eighth month Tazaungmon. All the offerings including cash are hung on Padetha trees which are brought to the monastery. An especially meritorious offering is the mahakathina robe, and a robe-weaving contest is held at Shwedagon Pagoda on the 14th waxing day of Tazaungmon. In this contest many groups of young women participate in competitions and each group must spin, weave and stich together a set of robes within a certain time scale: they must begin on the evening of the eve of the full moon day of Tazaungmon and must finish before dawn on the full moon day. The full moon day of Tazaungmon is called Samaññaphala Day, and on this day the Buddha delivered Samaññaphala sutta, the second sutta in the Dighanikaya, to King Ajatasatta. The sutta reveals a culture of respecting ascetics.

In ancient times, Nat worship was held in Nadaw (December).  In the present day, literary contests are held in this month, and people pay homage and offer gifts to elder writers and poets. 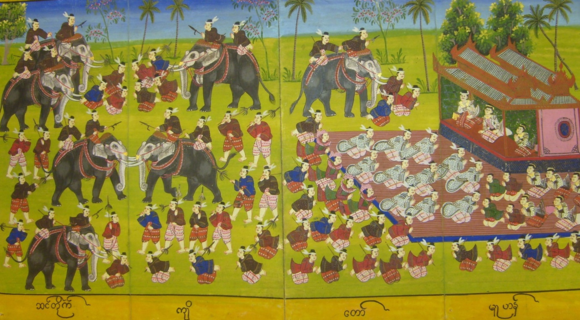 On the full moon day of Pyatho (January) the Buddha addressed a sermon, Adittapariyāya sutta, to Uruvela Kassapa, Nadi Kassapa, Gaya Kassapa and a thousand of their followers. At the end of the sermon they became arhats. Therefore the full moon day of Pyatho is called Shin ta thon day. On the full moon day of Tabodwe (February), the Buddha gave a sermon called Ovāda Pātimokkha to 1250 disciples, and village people offer the products of their farms for alms in this month at the harvest festival.  Tabaung (March), the twelfth month of the Burmese year is a month of Paya pwes (pagoda festivals), as the festivals are held at the pagodas all over the country.  Tabaung festival is marked by the building of sand stupas.

Posted by Annabel Gallop at 5:08 AM