Today's guest post is by London-based Anita Chowdry, a visual artist, academic researcher and educator, with a long and varied practice that spans three decades. Her current sphere of interests includes an holistic approach to maths, geometry, mechanics and the history of philosophy and technology, and the impact of these disciplines on the development of our aesthetic sensibilities.

A major area of Anita’s practical research is about painting and illumination in the book arts of the Middle East and India. As a highly skilled practitioner, Anita began her formative training in this genre in 1992 with an hereditary Rajput master in Rajasthan, India, and went on to continue her research at  some of London’s major museum collections. She lectures and runs specialist workshops on the subject at major institutions in Britain and abroad. Alongside her research interests Anita runs a successful creative practice, with disciplines ranging from manuscript illumination techniques to large scale sculptural installations.

Anita's work can be viewed on her website. She also posts regularly on her blog. 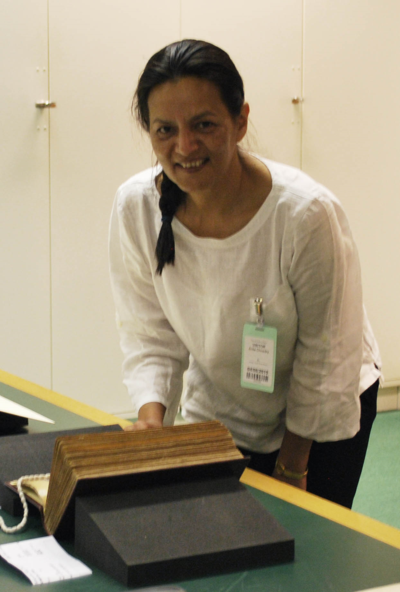 Looking at manuscripts in the British Library

My first experience of enjoying an elite manuscript close-up was in 1998, in the conservation studios of what were then the Oriental and India Office Collections at Orbit House Blackfriars, before the collection was moved to its current home at St. Pancras. A senior conservator, the late John Holmes, invited me to the studio to look at the Mughal Emperor Akbar’s Khamsa of Nizami, Or.12208. I already owned and enjoyed Barbara Brend’s illustrated monograph on the manuscript, The Emperor Akbar’s Khamsa of Nizami (British Library, 1995), but nothing can prepare you for the sheer sensuous pleasure of experiencing such a manuscript at first hand. Such was my elation at the time that I wrote extensively about it in my sketchbook: “It is one of the most beautiful and inspiring things I have ever seen... my first reaction is to the quality of the paper... exquisitely fine and tinted brown, burnished till it shines like silk...and the perfect line rulings – lamp-black filled with the palest malachite or shining gold – that divide the columns of beautiful Nastaʻliq script...”. 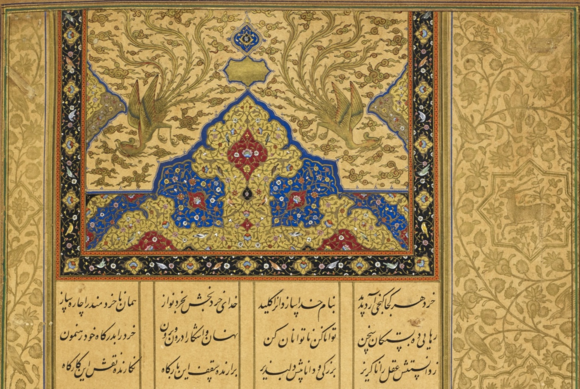 The manuscript contains some of the finest examples of early Mughal illustration, dense and animated in the distinctive fusion style of Akbar’s workshops, but what caught my imagination most were the supplementary marginal designs, which along with passages of formal illumination have only recently begun to be the subject of serious academic study.

Another comparably sumptuous copy of Nizami's Khamsa, Or.2265, with visionary illustrations that express a vibrant literary heritage, was produced some years earlier in the workshops of the Safavid ruler Shah Tahmasp (ruled 1524-76). Both manuscripts are now freely available as high resolution digital manuscripts (click on the hyperlinks to get to the digitised images), a wonderfully useful resource for artists and researchers because you can zoom in to study their details at leisure. 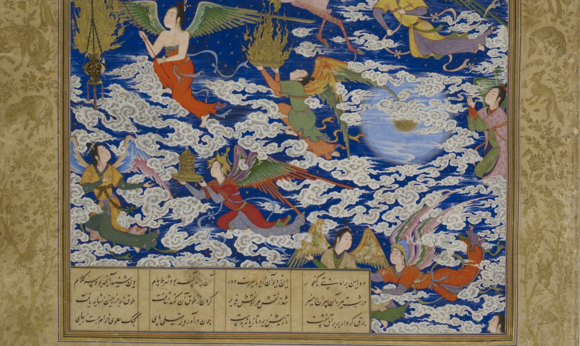 Detail of “the Prophet’s ascent” attributable to Sultan Muhammad, part of Shah Tahmasp’s Khamsa of Nizami (Or.2265, f. 195r)

In the image above the detail of the exquisitely painted other-worldly entities (peris) amongst swirling clouds exemplifies the qualities that make these manuscripts such an enduring source of inspiration to me.  The illustration is like sublime music or mathematics, in which classic design elements like the Chinese strap-clouds are given free expression without ever compromising their formal structure of expanding and diminishing reciprocal curves. Passages of visionary illustration like this are closely linked to the masterful marginal decorations that enrich every page of both manuscripts. 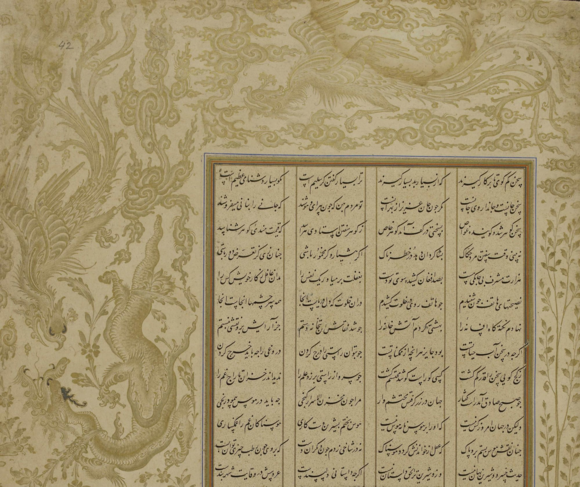 Detail of marginal design with formalized clouds, simorghs and dragons from Shah Tahmasp’s Khamsa of Nizami  (Or.2265 f. 42r)

Most of the margins are of the Shekari or hunting genre, executed in 24 carat gold pigment, with some details picked out in a greenish-gold alloy, or in silver, which has long since patinated to black. They feature intertwining vignettes of real and fantastic beasts interacting in rocky and jungle landscapes: the Persian Phoenix or Simorgh, a fabulous oversized bird with streaming tail-fathers, engaged in having altercations with dragons; snow-leopards in every conceivable contortion stalking wild goats, flocks of cranes performing aerobatics amongst Chinese strap-clouds, and some rather carnivorous-looking bovines snarling at predators. These enchanted worlds, where myth merges with the real, seem to have been created loosely and spontaneously, with compositions that flow like poetry – later schools of illumination never quite achieved the same fluency, and look stilted by comparison.

Following my formative years in the early ‘90s as a friend and pupil of a master painter in India, the late “Bannu”, who had generously shown me many of his hereditary secrets in miniature painting and the use and preparation of traditional mineral pigments, my experiences with these great manuscripts inspired me to refine my technique and to develop a light fluid hand and sense of movement in my work. A commission from a passionately creative collector provided me with an opportunity to explore illuminated and border elements as a detached, contemplative composition in the painting below.

Geometry is at the core of most illuminated design – and my reference to the Fibonacci spiral in the work is intentionally unequivocal. Taking the concept of natural geometry a step further, it struck me that in Sultan Muhammad’s visionary clouds and in his distinctive treatment of elements such as rocks, flames, and magical beasts, he worked with an intuitive sense of fractal geometry, some four hundred years before Benoit Mandelbrot’s ground-breaking realization of its existence as a mathematical entity. This inspired me to experiment with pure shapes digitally generated in the Mandelbrot and Julia Sets, in the context of classical Persian design. The images below are from a series of brush drawings exploring this concept. 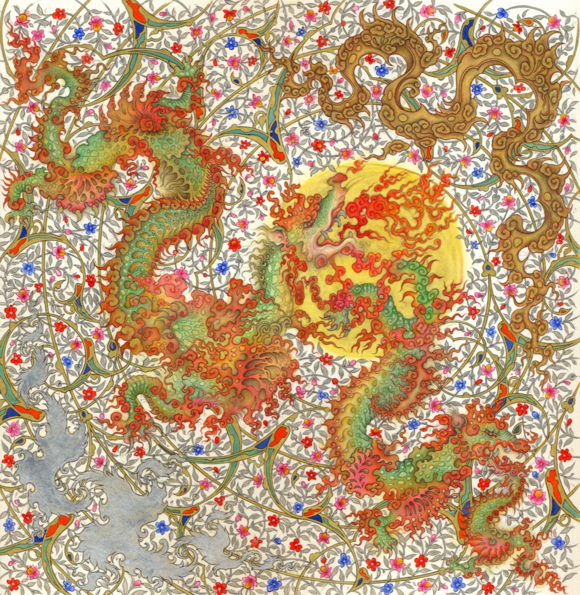 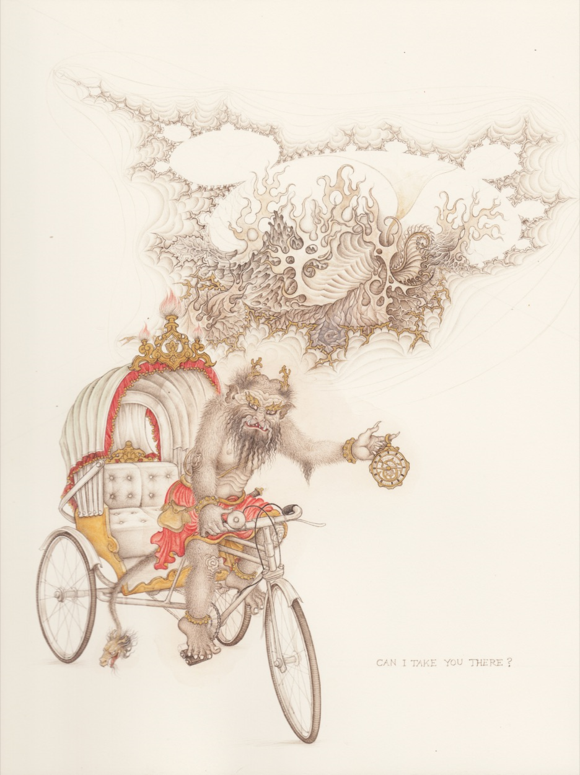 Can I take you there? (Demon on a rickshaw bound for the Mandelbrot set), brush drawing with pigment and gold. ⓒ Anita Chowdry

To my mind, there is an interesting correlation between the ambiguous imagery of fractals, and the many layers of meaning in the verses of Persian literature. Both hover somewhere beyond the realm of everyday experience, hinting at a partial existence in some other dimension. I am particularly drawn towards the mythical entities that punctuate the imagery in Persian manuscripts, because according to tradition, the dragons, demons and angels depicted as adjuncts to the texts exist on elemental planes unseen by humans. They were created by God out of “smokeless fire” (Qur'an, Sura 15:27) to exist in a hidden world parallel to ours.

My current preoccupation is with another sublime manuscript in the British Library’s oriental collections, Or.11846, created in Shiraz in the fifteenth century for the Turcoman prince Pir Budaq. The opening carpet pages display virtuoso rigour in design and execution which paradoxically creates an overall impression of quirky other-worldliness. The Chinese strap-clouds that undulate around the inner border are fairly restrained, but they do display a certain eccentricity, as does the intricate web of arabesques that covers all available space against a rich lapis lazuli ground. The energy and tension of this work has haunted me since I first saw it.

My initial approach is to try to understand the underlying structure of the design, and the distinctive “handwriting” with which the elements are drawn. Sketchbook studies of design structure in opening pages of Or.11846. ⓒ Anita Chowdry

The next stage is to draft out the design, and to start blocking in the gold, followed by the other colours, in what I think is the same sequence as that used by the original master. This process is not about slavish copying, but about learning empirically from the source. Part of the journey is to try to analyse and prepare the mineral colours to a comparable quality, and to gain an intuitive sense of the original intention of the design. 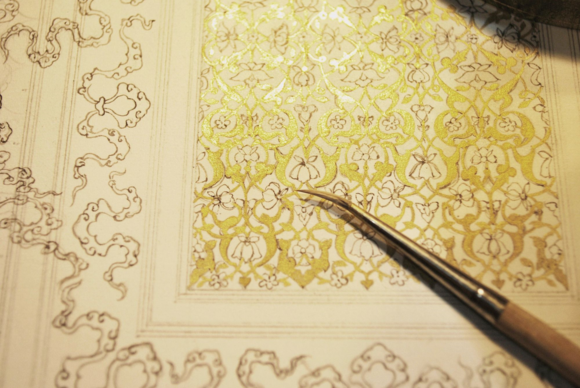 I do not know how exactly this work will develop or where this journey will take me. I have a sense that it wants to expand into another dimension, breaking out of the confines of its rigid structure. For me, the whole point of being an artist is to be on a continuous voyage of discovery, and to let the things that inspire you carry you along on their own momentum. I believe that it is through connections such as this that masterpieces of manuscript art transcend their original context and continue to enrich our experience today.