Panipat, north of Delhi, is the location of three historic battles that shaped Mughal history. On the battlefield here in 1526, Babur defeated the Afghan Sultan of Delhi Ibrahim Lodi, which not only ended Lodi rule but gave the Mughals a stronger foothold on the subcontinent. 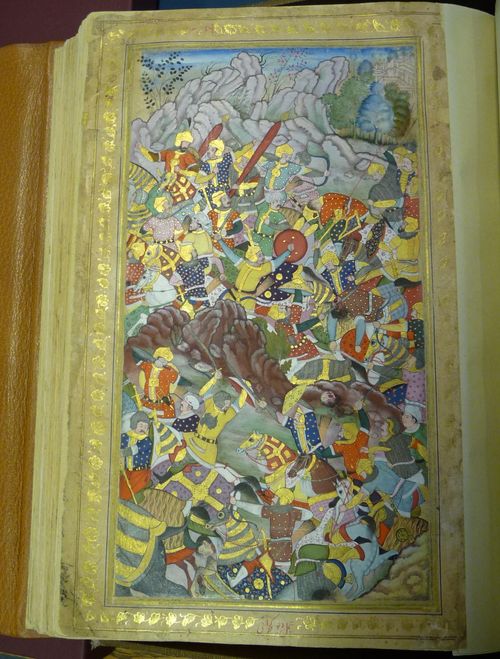 The second battle took place in 1556, when the emperor Akbar (r.1556-1605) fought a victorious battle against the Hindu Hemu, the last minister of the Afghan kings who had regained control of Delhi and Agra after Humayun’s death. Our drawing documents the military alliances and battle tactics played out between the Afghans and Marathas at the third battle of Panipat of 1761.

In the years following Nadir Shah’s invasion in 1739, emperors Ahmad Shah (r.1748-54)  and ‘Alamgir II (r.1754-59) were both quite weak and could barely voice their opposition against the various political parties wishing to exert their own control over the capital. The lack of a coherent government left the capital susceptible to attacks: from the north came the Afghan Durrani ruler Ahmad Shah Abdali in the 1750s, who looted whatever remained in the aftermath of Nadir Shah’s earlier attack. On the other hand, the capital was dominated by Ghazi al-Din Khan ‘Imad al-Mulk, the Amir al-Umara (Commander-in-Chief of the imperial army), and his alliance with the Marathas from central India. After deposing ‘Imad al-Mulk, the Marathas and the Afghans vied for political control of the capital, which led to the Battle of Panipat in January 1761. 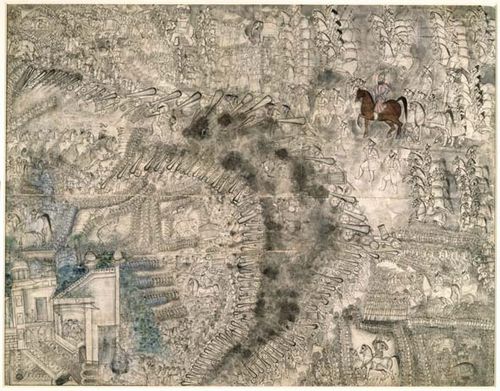 This exceptionally large composition (510 x 660 mm) required careful organization and precision to illustrate the line-up of the two forces. This scene pictures part of the external walls of the city and fortress that had been occupied by the Maratha forces. Inside the buildings, Afghans assault women and leave a stream of decapitated bodies. Ahmad Shah Abdali, the Afghan ruler, riding on horseback on the right-hand side, is the clear hero of the battle. He is illustrated proportionally larger than the remaining identified officers, dressed in a pink jama, and wears a distinctive pointed headdress. 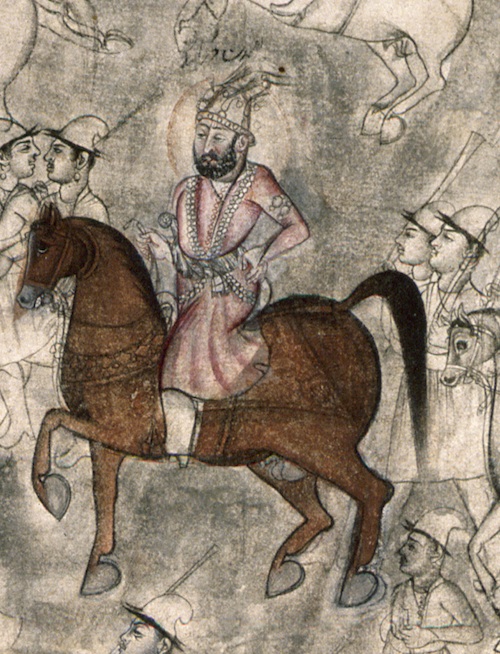 Each of the major players can be identified through the accompanying inscriptions. Next to Ahmad Shah Abdali is his son Timur Shah on horseback. The Afghans were supported by Najib Khan, the leader of the Rohilla Afghans who lived in the Rohilkhand region between the Ganges and the Jumna rivers, and Navab Shuja’ al-Daula of Avadh, who was coerced into joining the Afghans. These two leaders and their troops are positioned in the lower right corner.

In this battle, the Maratha leader Sadashiv Rao and his army fought against Ahmad Shah Abdali. The Marathas wished to replace the current emperor Shah ‘Alam II with his son Prince Javan Bakht. Sadashiv Rao appears at the middle left edge of this painting, on horseback with bleeding wounds. At centre stage, the line of defence is marked by the double rows of cannons firing against each other. Soldiers prepare for combat, elephants with howdahs carry the military commanders, and billowing smoke as well as bodies fills the scene. 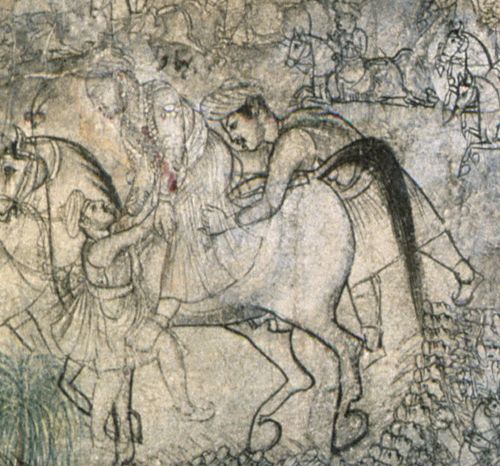 The rapid style of execution in ink, with compressed figures drawn in rows and few touches of colour, aids the viewer through the frenzied battle scene. Compositionally, this style of execution has Mughal precedents, such as the well-known painting of the Battle of Samugarh, when Aurangzeb was victorious in the war of succession against his older brother Dara Shikoh. Within the wider remit of Indian painting, Amber artists Gopal, Jivan and Udai collaborated to illustrate Emperor Bahadur Shah I in battle in the Deccan.

However, although our drawing has been identified as the work of a Faizabad artist, the fact that Ahmad Shah Abdali is prominently drawn proportionately larger than the other figures leads us to question the source of patronage. No artist working in the region controlled by Navab Shuja ’al-Daula would be so bold as to picture the Navab as submissive to Ahmad Shah Abdali. It seems more appropriate to suggest that this is the work of a Mughal artist who worked for the Afghan ruler in the Durrani-controlled Punjab or even Kashmir.