Persian and Turkish manuscripts on view in the Treasures Gallery

The Sir John Ritblat Treasures of the British Library Gallery includes altogether more than 200 items: hand-painted books, manuscripts, maps and views, early printed books, literary, historical, scientific and musical works from over the centuries and around the world. In a recent post, guest blogger Henry Noltie wrote about three Raffles bird paintings which are now on display. The gallery also includes the earliest dated printed book, the Diamond Sutra (more on this in the International Dunhuang Project's post "The Diamond Sutra on display") and various other Asian and African items. A section dedicated to the Arts of the Book includes four Persian and Turkish manuscripts, just a selection from our collection of more than 15,000 manuscripts. These are:

The Javamiʻ al-hikayat is a compilation of tales and anecdotes dating from mythical times until the end of the rule of the Abbasid Caliph Al-Mustansir. It was written in Persian by Muhammad Awfi who lived during the Delhi Sultanate in the reign of Shams al-Din Iltutmish (r. 1211–1236).

The manuscript on display was copied in southern Iran, or, possibly even, in Sultanate India in AH 842-3 (1438-39). Twelve of the illustrations are contemporary, painted in a provincial Shirazi/Timurid style. The serried rows of people and the somewhat strange representation of architecture have been thought however to indicate a Sultanate provenance [1]. Ten other illustrations were added in a Bukharan style in about 1550, and three more are Mughal, added in India in the late 18th century. 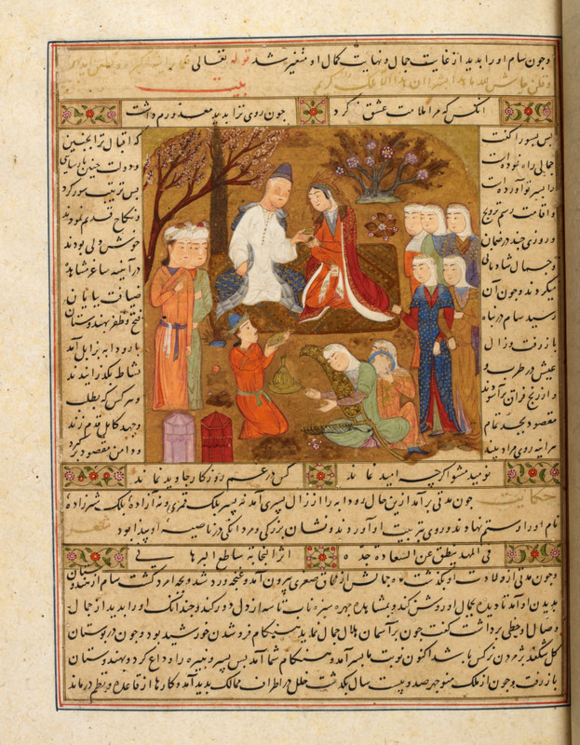 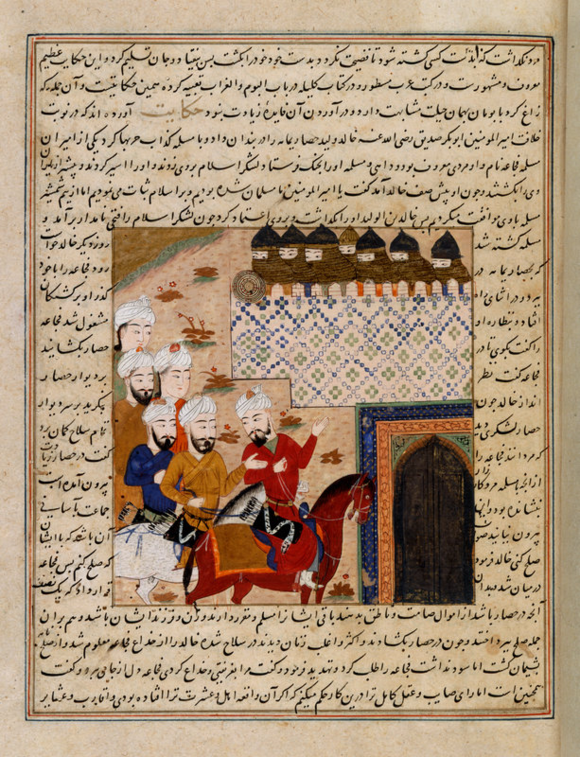 Majjaʻa ibn Murara, the supporter of the Prophet's rival Musaylimah , with women dressed as men on the roof of the fortress of Yamama. This was a ruse to deceive Khalid ibn Walid (shown below) into thinking that the fortress was well guarded. Iran, Southern Provincial style, 1438-39 (Or.11676, f.205)

This copy of the Khamsah ('Five Poems') by Nizami is one of the most famous Persian manuscripts. It was produced at Tabriz between 1539 and 1543 for the Safavid Shah Tahmasb I. Copied by Shah Mahmud Nishapuri, it contains masterpieces by leading artists, some of them introduced from a different manuscript. Further paintings and illuminations were added in the 17th century (see our earlier post: Some paintings by the 17th century Safavid artist Muhammad Zaman 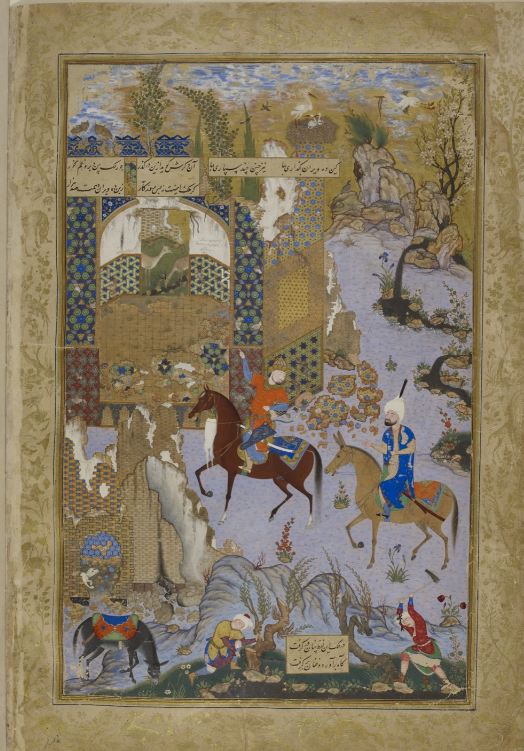 On display, the Iranian emperor Anushirvan and his vizier approach a deserted village where they overhear owls deploring the number of ruined villages. The artist's name is inscribed in the arch, underneath hanging snakes: "Painted by the artist Mirak, 946 [1539/40]" (Or. 2265, f. 15v)

The physiognomy of the Ottoman Sultans

The Kiyafet ül-insaniye by the court historian Seyyid Lokman is a study in Turkish of the physical appearance and character of the Sultans of the Ottoman dynasty, who for several centuries ruled much of the Middle East and southeastern Europe. The traditional science of physiognomy is based on a theory of correspondences between physical features and character. Lokman's treatise is illustrated with portraits of the Sultans and dates from the 16th century. 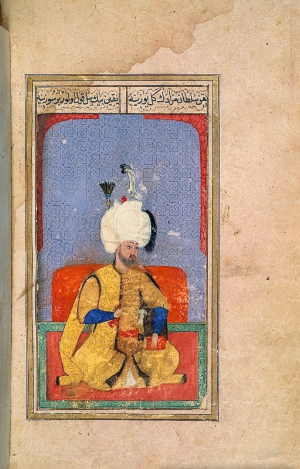 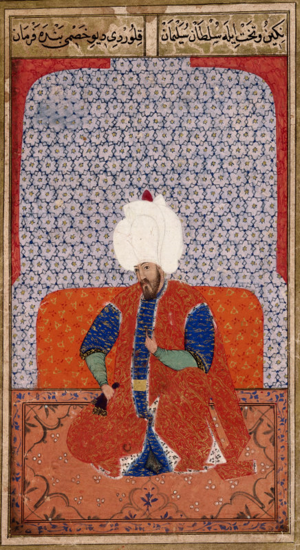 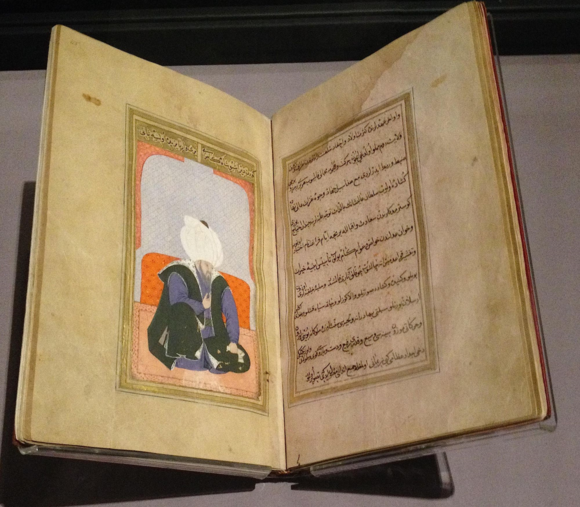 On display is a portrait of Sultan Bayezid II whose good character earned him the epithet Veli (the Saintly). He ruled from 1481 to 1512 and was an enthusiastic patron and student of religious learning and the arts (Add. 7880, ff.44v-45r)

Fables of Bidpai in Turkish

The Humayunname is a Turkish version of the 'Fables of Bidpai', translated from Persian for Sultan Suleyman I in AH 950/1543 by the scholar and calligrapher Mustafa ʻAli Çelebi of Filbe (now Plovdiv, Bulgaria). These fables, in which the protagonists are animals who sometimes act rather like humans, share a common ancestor with Aesop's fables and are ultimately derived from India. It contains 163 miniatures and was copied in Zu'l-Hijja AH 997 (October/November 1589). 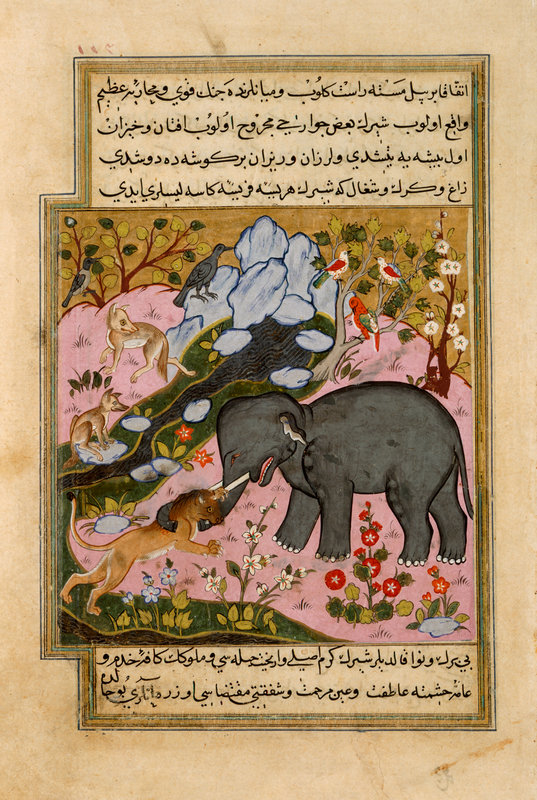