The Chakrabongse collection of Thai royal letters (Or.15749) 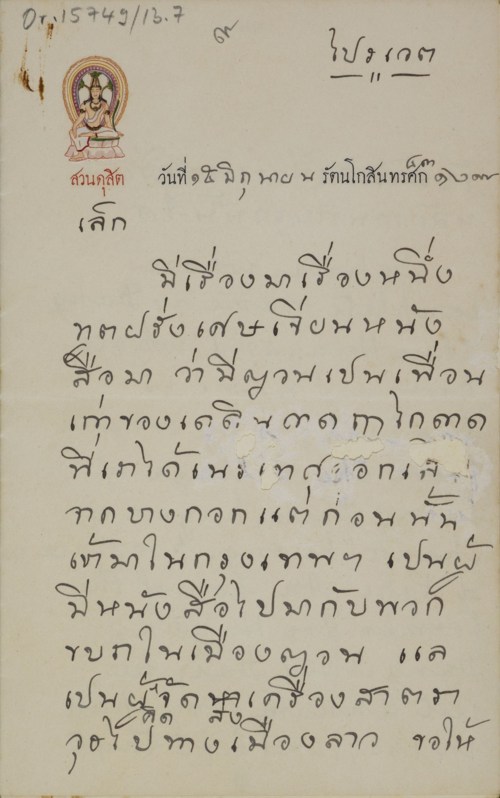 King Chulalongkorn (Rama V) reveals on 15.6.1910 details of a request from the French ambassador in Bangkok: "The French ambassador has written that a Yuan [Vietnamese], whom we expelled from Bangkok, has come back to Bangkok as the bearer of a letter from the rebels in Vietnam, and that he is planning to send weapons via Laos. He asks that we capture him and expel him... We have an obligation to help the French in this matter..." (translation by Henry Ginsburg). British Library, Or.15749/13.7, f. 1

His Royal Highness Prince Chakrabongse Bhuvanadh, Prince of Bisnulok, was born on 3 March 1883, as the 40th child of His Majesty King Chulalongkorn (Rama V) and 4th child of Her Majesty Queen Sri Bajarindra.  He was initially educated in the Royal Palace in Bangkok, then sent to England for further study at the age of 13. During King Chulalongkorn's visit to Russia in 1897, Nicolas II, last Emperor of Russia and a close friend of King Rama V, invited the king to send a son to be educated in Russia, under the care of Nicolas II himself.  Prince Chakrabongse, who had been studying in England for almost two years, was chosen and moved on to St Petersburg to study military science (1898-1912?).  After finishing his studies, he became a Colonel in the Hussar Regiment of Nicholas II. 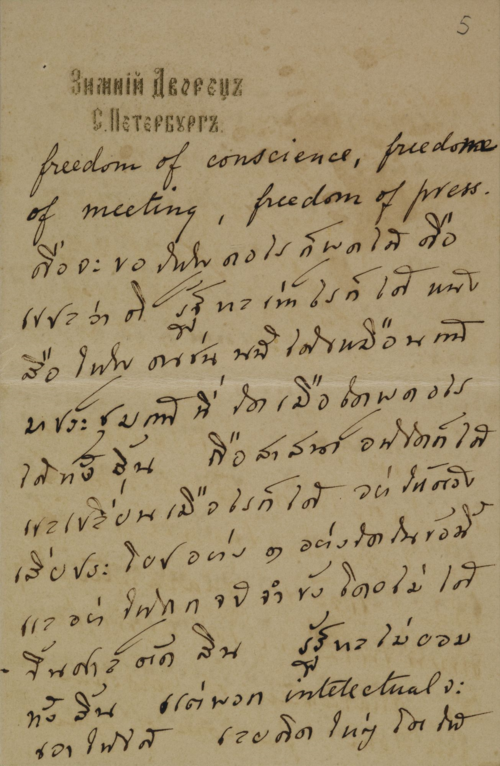 Prince Chakrabongse describes the situation in St Petersburg, dated 6.11.1905: "It can be called a revolution but of a new kind, not like the French revolution. As I wrote before, there is a new group of people, the ‘intellectuals’ asking for a parliament, asking for the workers’ rights and strikes, but the aristocracy do not want a parliament... The intellectuals are more determined, the government cannot suppress them because most people support the intellectuals. On 17 August the parliament was allowed but only to persons trusted by the government, i.e. rich people, professionals, but no students or workers... So they continue with disruptions, demanding elections and as in every city of Europe guarantees of personal freedom, freedom of speech, of conscience, of meeting, of press."(translation by Henry Ginsburg). British Library, Or.15749/8.12, f. 5

After his return to Thailand, Prince Chakrabongse initiated the idea of establishing a flying unit in the Thai Army and set up the Aviation Section in the Directorate of Engineering in 1913. During World War I, he was the commander in charge of war planes and established the Volunteer Force that was sending Thai soldiers to help the European Allies under the royal command of King Rama VI. In 1919, aircraft were used for postal purposes for the first time in Thailand. Today, Prince Chakrabongse is still respected as the “Father of the Royal Thai Air Force”. 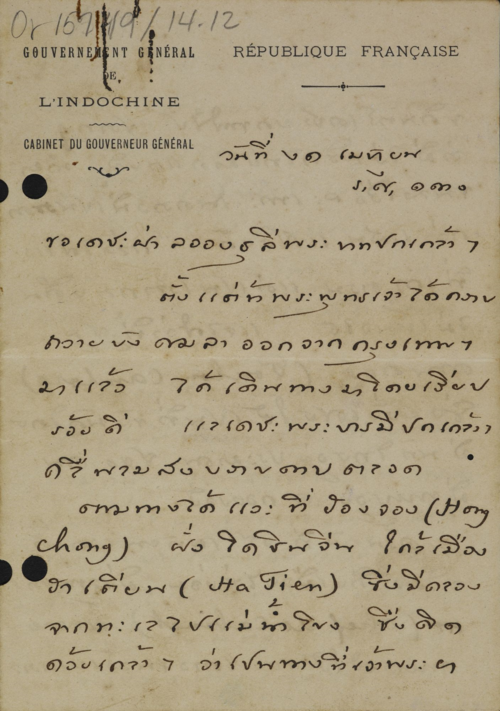 Prince Chakrabongse writes to his brother, King Vajiravudh (Rama VI), about his impressions during a trip to Saigon on 21.4.1912: "The centre of the city is completely French, with large buildings, the shops lit up at night by electricity, it was very elegant. There are French cafes everywhere, the roads are lined with trees and as the trees are already large it is shady and cool to the eye, and there are lots of parks. Municipal water which is clean and clear flows everywhere. There are large ships and European packet boats moored only on one side of the water, then the native city around it, the Yuan live in huts and in Chinese row houses.... Around Saigon and in all Cochinchina there are paved roads going everywhere.  It is very easy to drive here, as quickly as in Europe, which is admirable and astonishing in Cochinchina. Believe me, the French have spent a lot of money here." (translation by Henry Ginsburg). British Library, Or.15749/14.12, f. 1

At the time of his unexpected death in 2007, Henry Ginsburg had already begun to catalogue and describe the letters, and he left behind an electronic text document with a list of shelfmarks and more or less detailed descriptions of many of the letters. For some selected letters he also had prepared a romanised transcription and translations of parts of their contents.

Almost all the letters in the collection, written on European paper, are in good condition. In order to make a decision on an appropriate storage solution several aspects had to be taken into consideration, including the safety and security of the collection, convenient reader access, technical aspects of order and supply, aesthetic aspects, and cost. It was decided to store each letter in a custom-made case, which was the most costly option, but at the same time the safest option in terms of conservation and security.

At the beginning of 2008, a decision was made that the Chakrabongse Collection should be digitised as part of the British Library’s Thai Manuscripts Digitisation Project, which was funded by the government of Thailand through the Royal Thai Embassy in London. In this project, the entire Chakrabongse Collection and over fifty Thai manuscripts from the Library’s collection were digitised and made available freely on the Library’s Digitised Manuscripts webpage, enabling easy and comfortable access at any time to this rare archival material. This initiative is highly valued not only by historians and the wider research community but also by the Thai public, as the letters give insight into the relationship between King Chulalongkorn and his children as well as political issues at the time the letters were written. To access the digitised letters from the Chakrabongse Archive, the keyword “Chakrabongse” should be inserted in the Quick Search field on the Digitised Manuscripts webpage. 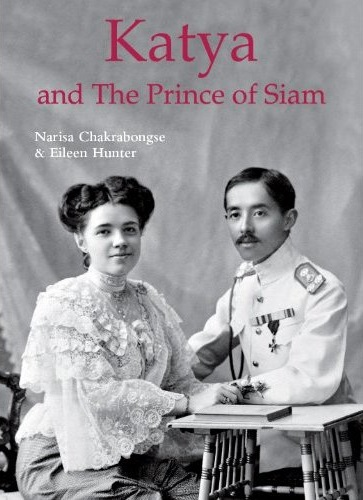 The book Katya and the Prince of Siam by Eileen Hunter and Narisa Chakrabongse  provides a detailed insight into the life of Prince Chakrabongse and his family.