The Cat and the Rat: a popular Persian fable

Stories about animals have universal appeal, as demonstrated in our current exhibition Animal Tales. In the West the best known are probably Æsop’s fables. Less well known are the Fables of Bidpai, a collection which can perhaps be regarded as Æsop’s distant cousin several times removed, first published in English in 1570 as The Morall Philosophie of Doni [1]. 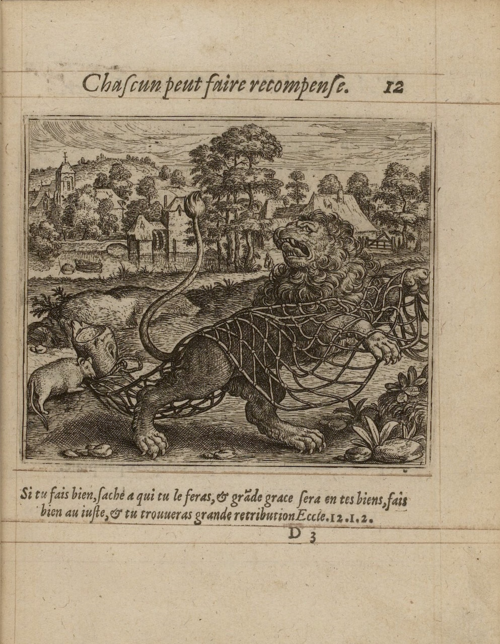 On display is the story of the lion and the rat from Esbatement moral des animaux, a 16th century retelling of one of Aesop's best known fables. The story tells how a mouse (or rat) was caught by a lion, but allowed to escape. Later, the lion was trapped by hunters. Hearing its roars, the mouse repaid the lion’s good turn and set it free by gnawing through the net, the moral being that a small creature can help a greater and that mercy brings its own reward.

In this post I will look at some parallel examples in Persian literature which are related to the Fables of Bidpai, stories told within a frame narrative by the brahmin Bidpai to the king Dabashlim. Although they owe their origin to India where they are best known as the Panchatantra, it is largely through the Arabic translation by Ibn al-Muqaffaʻ (died c. 757) of a lost Middle Persian (Pahlavi) version that they have become known in the West. The story, as told in the Arabic and Persian versions, describes how the Sasanian king Anushirvan (Khusraw I, r. 531-579) heard of a book treasured by the kings of India which had been compiled

from the speech of animals and brutes and birds and reptiles and savage beasts; and all that befits a king in the matter of government and vigilance, and is useful for princes in the observance of king-craft, is exhibited in the folds of its leaves, and men regard it  as the stock of all advice and the medium of advantage. (Kāshifī, via Eastwick, p. 6)

Anushirvan sent his physician Burzuyah on a mission to India to discover the book and Burzuyah returned with a copy which he translated into Pahlavi. The stories were re-translated into Arabic and Syriac, and then from Arabic into Persian and other languages. 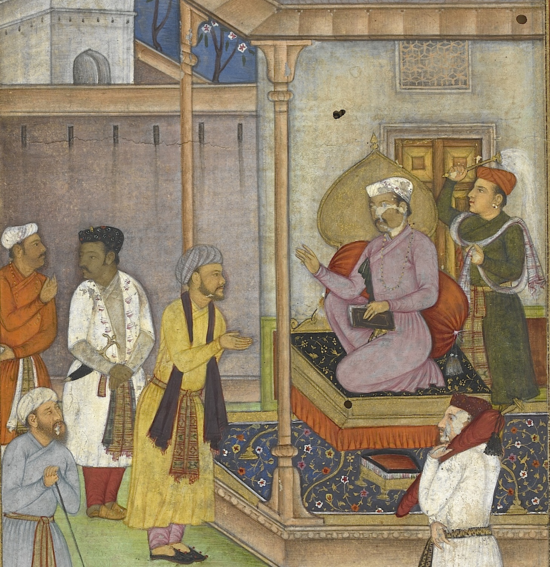 Naṣr Allāh Munshī’s Kalīlah va Dimnah
Apart from a few single verses of a translation by Rūdakī (d. ca. 941) which survive as quotations, and a single copy of a 12th century translation by Muḥammad ibn ʻAbd Allāh Bukhārī (De Blois, p. 5), the earliest extant Persian version is by Naṣr Allāh Munshī which he completed around 1144. It became sufficiently popular that 12 illustrated copies survive from the 14th century alone (O’Kane, pp. 41-3) including Or.13506, illustrated below, which dates from AH 707 (1307/8).

The story of the rat and the cat was “the most commonly illustrated scene in all pre-fifteenth-century Kalila and Dimnas” (O’Kane, p. 193), perhaps because it is one of the shortest chapters without any extra interpolated sub-stories. The plot and the moral are somewhat different from Æsop’s. A cat (gurbah) was trapped by bait in a hunter’s net. A rat (or mouse mush) emerging from his hole also looking for food, at first rejoiced to see the cat ensnared but then noticed an owl (būm) and a weasel (rāsū) waiting to pounce. In return for the cat’s protection he offered to set the cat free. His plan was successful: as soon as the owl and weasel saw the cat and rat joining forces, they made off. The rat then began to gnaw his way through the net, but slowly, as he wondered what would prevent the cat from eating him up once freed. After a lot of deliberation and discussion between the two, the rat decided to postpone the final bite until such time as the cat might be so distracted as to allow a safe escape. Shortly afterwards the hunter returned. The rat bit through the last cord and bolted down his hole in the ground while the cat shot up a tree.

After the hunter had left empty-handed, the cat returned and attempted, without success, to convince the rat of his friendly intentions. The very modern moral is that while it can be advantageous to form alliances with one’s enemies when expedient, it’s not a good idea when the danger has passed! 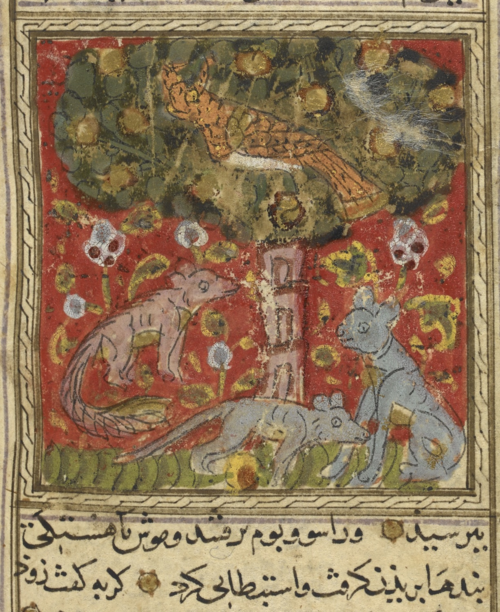 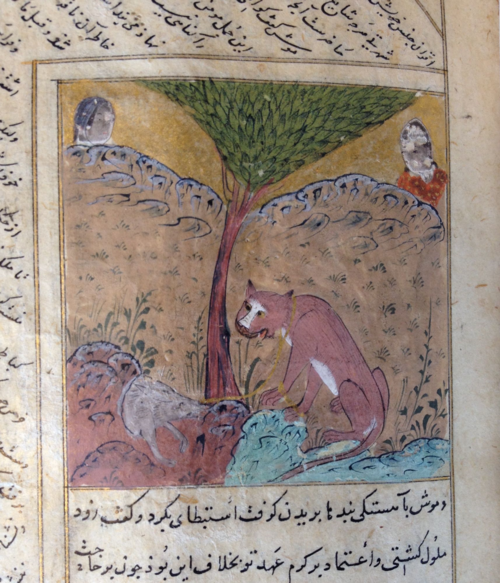 In this copy of Naṣr Allāh Munshī’s Kalīlah va Dimnah, the rat emerges halfway from his hole to release the cat from the snare. Early 15th century South Provincial/Timurid style (British Library Or. 13163, f. 169r)

Ḥusayn Vāʻiz̤ Kāshifī’s Anvār-i Suḥaylī
A feature of Naṣr Allāh’s translation was his extensive use of Arabic poetry and quotations from the Qu’rān. By the end of the 15th century, it was regarded as old-fashioned if not incomprehensible on account of its general long-windedness and the Timurid Sultan Ḥusayn Mīrza Bāyqarā (r.1469-1506) asked Ḥusayn Vāʻiz̤ Kāshifī to produce a more convenient (āsān ‘convenient’ as suggested by Christine van Ruymbeke below, rather than ‘easy’ as normally interpreted) version. Kāshifi eliminated most of the Arabic but added a lot more stories - still quite florid nevertheless! - and it was this version which subsequently became the most popular.

Kāshifī’s version of the story of the cat and the rat remains the same except that the owl (būm) becomes a crow (zāgh) and two extra stories are inserted. 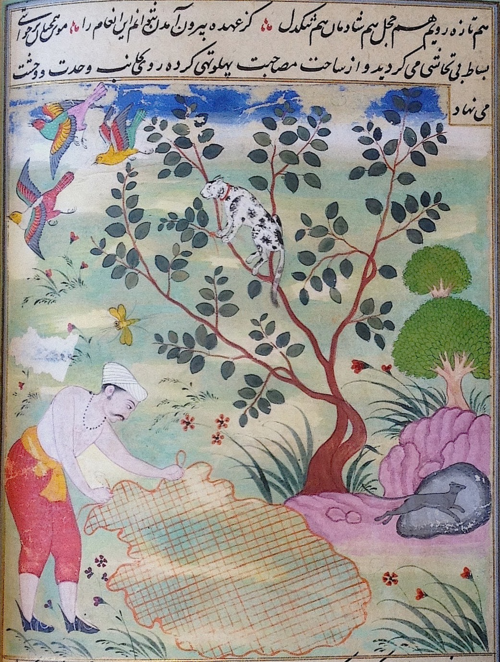 Abū'l-Faz̤l’s  ʻIyār-i dānish
Kāshifī’s Anvār-i Suḥaylī was particularly popular at the Mughal court. Under Mughal patronage several imperial copies were made including Add.18579 (see above) which was copied for Jahāngīr and completed in AH 1019 (1610/11). Evidently, however, Kāshifī’s ‘convenient’ but florid style was still difficult to understand because Akbar commissioned his chief minister Abu’l-Faz̤l ʿAllāmi (d. 1602) to write yet another version which though written in a simplified style included even more stories.

The British Library has two illustrated copies of Abū’l-Faz̤l’s version, both of which include paintings of the story of the cat and the rat. The paintings, however, although they occur in an identical context, have a very tenuous connection with the text which clearly mentions cats and mice/rats! 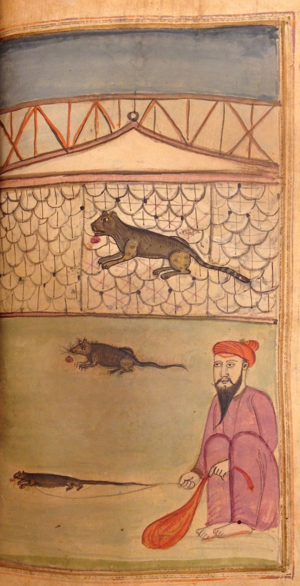 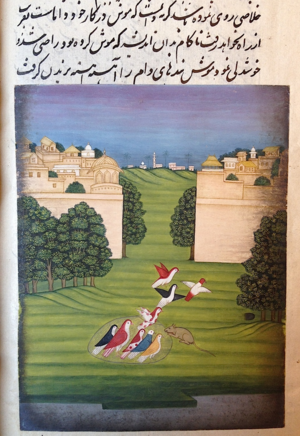 The large number of illustrated and unillustrated manuscript copies of Anvār-i Suḥaylī and ʻIyār-i dānish is proof of their continuing popularity. The British Library has more than 30 dating from the 16th century until the advent of printing in the 19th century, at which time they were adopted as set texts for examination in the Indian Civil Service. These manuscripts range from luxury productions to very ordinary copies. Originally presented as guidance for good kingship, they had a double function: to educate the wise and to amuse the ignorant while being both easy to teach and to remember (Kāshifī, via Eastwick, p 4). They thus served a pedagogical purpose as a kind of general pre-modern citizenship manual.

Marginal illustration from the story of the cat and the rat in the Arabic translation by Ibn al-Muqaffaʻ (British Library Or.4044, f. 97v)

Our current exhibition, Animal Tales, is open until 1 November 2015 in the Entrance Hall Gallery at the British Library. Entry is free. A full list of exhibits is available on our American Collections blog and you can read about some further examples in the Western medieval tradition on our Medieval Manuscripts blog.

Eastwick , Edward B. The Anvár-i Suhailí, or the Lights of Canopus: Being the Persian Version of the Fables of Pilpay, or the Book “Kalílah Und Damnah”. Hertford: Austin, 1854.

[1] Doni, Anton Francesco, and Thomas North. The Morall Philosophie of Doni: Drawne Out of the Auncient Writers. A Worke First Compiled in the Indian Tongue, and Afterwardes Reduced into Diuers Other Languages. Imprinted at London: By Henry Denham, 1570.

Posted by Ursula Sims-Williams at 12:22 PM