Till death us do part – or not?

The highlight of most wedding ceremonies is two people making their vows to each other by promising to be true to each other ‘for better, for worse … till death us do part’. But what happens when they die? Where does all the eternal love sworn by innumerable couples go? We first explored the subject in East Asian ghoulish images & stories last year; this year we concentrate on one particular story to investigage the possibilities of love after death. 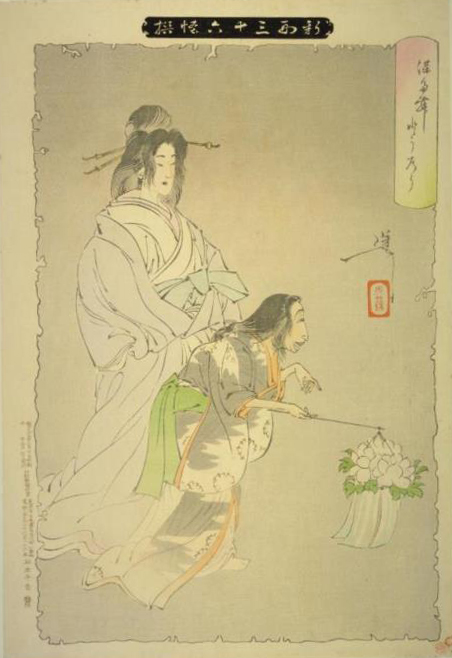 Otogibōko 伽婢子 (1666) by Asai Ryōi 浅井了意 , a pioneering early modern Japanese work of terror and wonder, contains 68 stories mainly inspired by ghost and supernatural stories from the Asian mainland. Not only did the author translate the story lines into Japanese, but he localised situations to meet the expectations of Japanese popular fiction readers in the early Edo era.  Although a number of episodes in Otogibōko fired the imaginations of later authors, perhaps the most loved story is ‘The Peony Lantern’ (Botandōrō 牡丹灯籠), which originated in China as Mudan deng ji牡丹燈記as a part of ‘New stories told while trimming the wick’(Jian deng xin hua 剪燈新話). 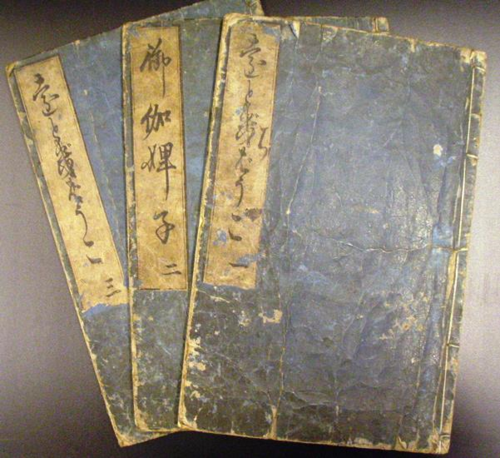 This is the story of a young widower, Shinnojō新之丞, who re-encounters his beautiful beloved without realising that she has in fact already died. His neighbour hears the young couple cheerfully chatting and laughing, and accidentally sees that Shinnojō is with a skeleton. He warns Shinnojō that he is in danger, and strongly urges him to find out the true identity of the woman he believes to be his newfound love. In the end, Shinnojō finds the grave of his lover and faces the shocking truth that she is indeed a ghost, and realises that he must not contact her any more. 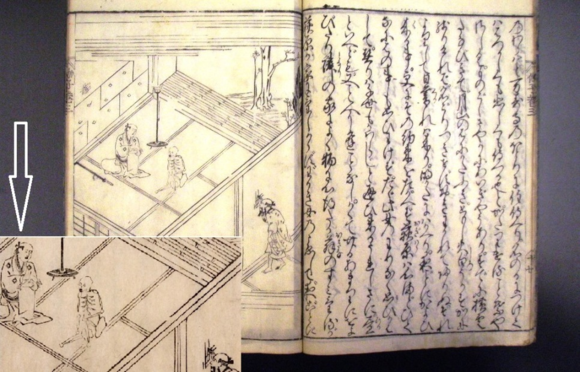 Shinnojō is given a talisman (ofuda お札) by a Buddhist monk in order to protect his house from the dead. After about fifty quiet nights have passed, Shinnojō goes to see the monk to thank him for his protection. He thinks he is safe, but on his way back home he passes close by the woman’s grave and starts thinking of her again. Suddenly she appears and captures the unprotected Shinnojō whom she blames for betraying all her devotion and true love.  Later his body is found with the skeleton in her grave. 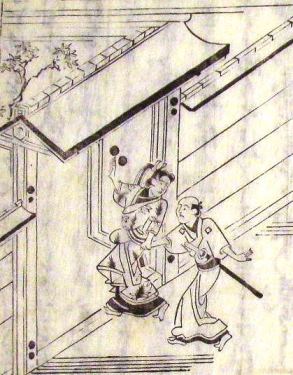 San'yūtei Enchō I 三遊亭 圓朝 (1839-1900) wrote a rakugo 落語 version of this story and titled it Kaidan Botandōrō 怪談牡丹燈籠. Rakugo is a highly distinctive genre of comic monologue performed by professional storytellers, rakugo-ka 落語家. Enchō I added more episodes which extended the story lines of the Botandōrō , renaming the hero as Shinzaburō新三郎 and the ghost heroine as Otsuyu お露 and relocating the setting from Kyōto to Edo. Enchō I’s adaptation was later translated by Lafcadio Hearn as ‘A Passion of Karma’ in his book In Ghostly Japan.

One of the added highlights of Enchō I’s version is ‘The scene of removing the protective charms’, ofuda-hagashi お札はがし. After Otsuyu’s true identity as a dead woman is revealed, Shinzaburō barricades his house with the talisman or ofuda and constantly keeps his protective golden statue of the Buddha close to him. Otsuyu continues grieving over her separation from Shinzaburō because of the ofuda and becomes very angry. Otsuyu plots against Shinzaburō by bribing a pair of his servants to swap his golden statue of the Buddha for a copper one, and removing the ofuda from his house. As soon as all Shinzaburō’s protections were removed, Otsuyu merrily slips into the house and takes Shinzaburō to the world where they will never be separated again – by ending his life. 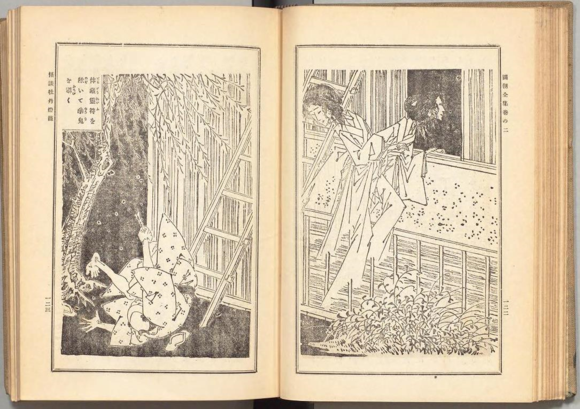 An interesting difference between the two versions is the way in which the hero is captured by the ghostly woman.  In the earlier version, the ofuda is not removed, and as long as the hero stays inside his house with the protection of the talisman, he is safe. In the later version however, the talisman is secretly removed by someone else, allowing the ghost to slip into the house. 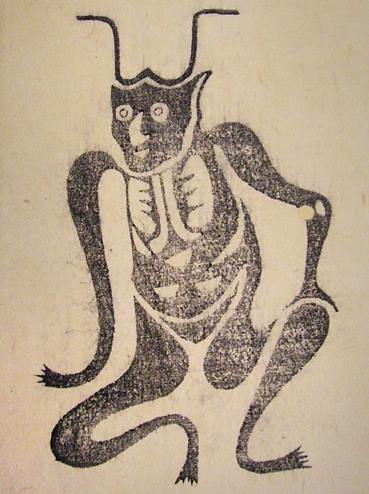 Shown above is an example of a famous talisman or ofuda to protect people within a house by sticking it on the outside of the entrance door, and thus preventing all evil spirits from entering the house. This figure, called Tsuno Daishi角大師, meaning the Horned Master, is an avatar of Ryōgen 良源. Ryōgen was a high-ranking Buddhist monk in the 10th century. In the legend of Tsuno Daishi, Ryōgen dared to transform himself into a powerful demon in order to defeat evil spirits by scaring them off.  Tsuno Daishi protects people as if he is fighting in the front line in the war between Good and Evil. Therefore the ofuda used in the Shinzaburō’s house could well have been of Tsuno Daishi.

It is said that true love never dies. However, it could cost the lover’s own life as well…. 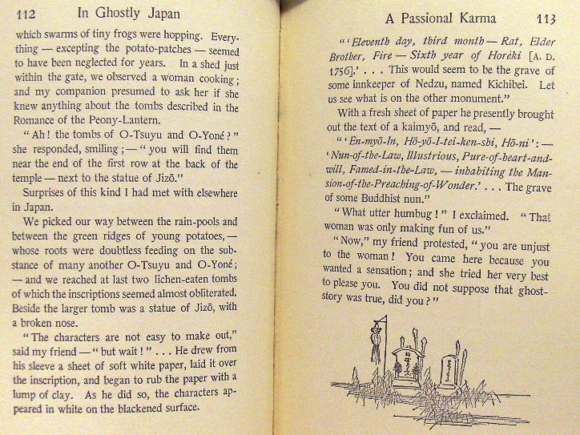 The graves of Otsuyu and her maid with their peony lantern. Lafcadio Hearn,  In Ghostly Japan. Boston: Little, Brown and Co, 1899. British Library, 08631.f.6.

Posted by Annabel Gallop at 5:30 AM