Problems in Deccani and Mughal drawings: a marbled ox fight and the Virgin of the Apocalypse

This blog continues my recent series of posts on the Library’s Deccani collections with one on Deccani drawings and specifically Deccani Christian subjects from Richard Johnson’s collection.  At least that was the original intention, given that there are ten drawings of Christian subjects described as Deccani from the mid-17th century in the Falk and Archer catalogue of 1981 in need of further examination, but as I looked at the drawings it seemed harder and harder to justify describing some of them as Deccani rather than Mughal.  This is a difficult area for absolute certainty of attribution, given that we are dealing in most cases with later versions of earlier drawings.   Johnson’s postings are of no help: he was in Lucknow 1780-82 and in Hyderabad 1784-85, but Deccani paintings were freely available in Lucknow also.  This blog will look at two of the drawings, reserving others for a further post.

Our first page, undoubtedly Deccani, unfortunately damaged but still superlatively interesting, is an example of abri or marbled paper used to create drawings combined with blank and painted areas of the paper.  The damaged outer portions and frame of the page have not been included here. 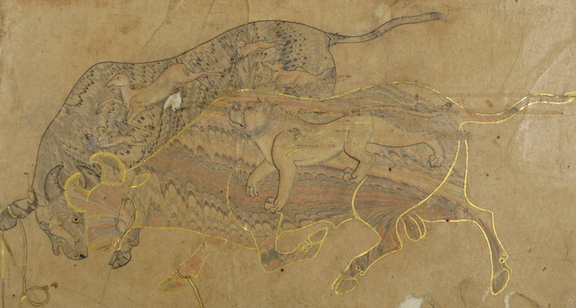 Two superbly drawn oxen silhouetted in marbled paper against plain paper are locking horns.  One ox is outlined in black, and the other in gold, and they each contain other animals including lions, deer, a jackal and rabbits.  The gold outlining round the animals is continued in the loose tethers as well as in the integral marbled frame, which has the owner's seal of Hajji(?) Muhammad Mu‘min.  Although it is from the Richard Johnson Collection put together in India in the 1780s, the drawing was catalogued originally by B.W. Robinson as Persian (Qazwin style) or possibly Turkish, from the second half of the sixteenth century, and so was not included in the Falk and Archer catalogue. The art of marbling was introduced into India from Iran in the 16th century, but this type of drawing comprising one or more marbled figures against a plain ground seems in fact peculiarly Deccani.  The recent Metropolitan Museum exhibition on Deccani arts brought together several examples, including the famous ascetic riding a marbled emaciated nag outlined in gold from the Museum and its counterpoint from the Morgan Library of the drawn nag outlined in black silhouetted against a dramatically marbled page (Haidar and Sardar 2015, nos. 73, 74).  Our drawing combines the two ideas with its delicate gold and black lines outlining the two fighting oxen.  Some kind of resist technique similar to the dyed kalamkaris of the Deccan has had to be employed to produce these drawings, and here two adjacent areas have been juxtaposed with differently coloured marbled paper. More than that, within each ox, areas have been left free for other animals to be delicately washed in nim qalam: a jackal chases deer and hares in the darker ox, and in the lighter one a magnificently prancing lioness (her rear end unfortunately tampered with) sniffs the air with her lion cub outlined in gold within her, while a hare has taken refuge curled up just within the ox’s head.  This conceit is unlike composite drawings in which the animal’s outline is totally filled with other creatures contorted to fill the space.  Another Deccani version of this composition, also in marbled paper, is in a New York private collection (Pal 1983, no. D1). 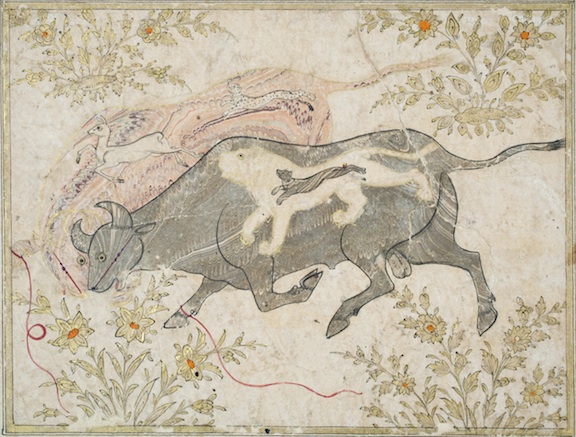 One of Johnson’s specific interests was in Mughal or Deccani paintings and drawings of Christian subjects, which were normally based on European engravings.  These were brought to Mughal India by the Jesuits in particular, who aimed to use such images to help in the conversion of the peoples of Asia.  Akbar’s and Jahangir’s artists painted over and copied such prints as aids in their quest for command of recession and volume and enlarged upon them in various ways without a care for the original iconography. While these types of drawings from the Mughal period are well known, those from the Deccan are less so.  Although there do not seem to have been any missions sent from Goa to the relatively near Ahmadnagar or Bijapur courts, Christian prints undoubtedly found their way into the hands of these Deccani artists, as evidenced by two drawings in the Freer Gallery (Zebrowski 1983, nos. 83 and 146).  They are clearly different from Mughal treatments of Christian subjects, having a certain angularity and awkwardness about them offset by their calligraphic line or sumptuous colour, which seems typical of what to expect from such material.

One of the finest Christian subjects in Johnson’s collection, unfortunately slightly rubbed, is a wash drawing of the Virgin of the Apocalypse, its iconography based on St. John’s description of the Woman clothed with the Sun from that text.  The Virgin holding the Christ Child in her arms and surrounded by a flaming glory representing the sun stands on a crescent moon and crushes the serpent, representing Satan, beneath her foot.  Two angels bring her a crown while two more hover at her side.  The Christ Child is offering his mother a fruit. 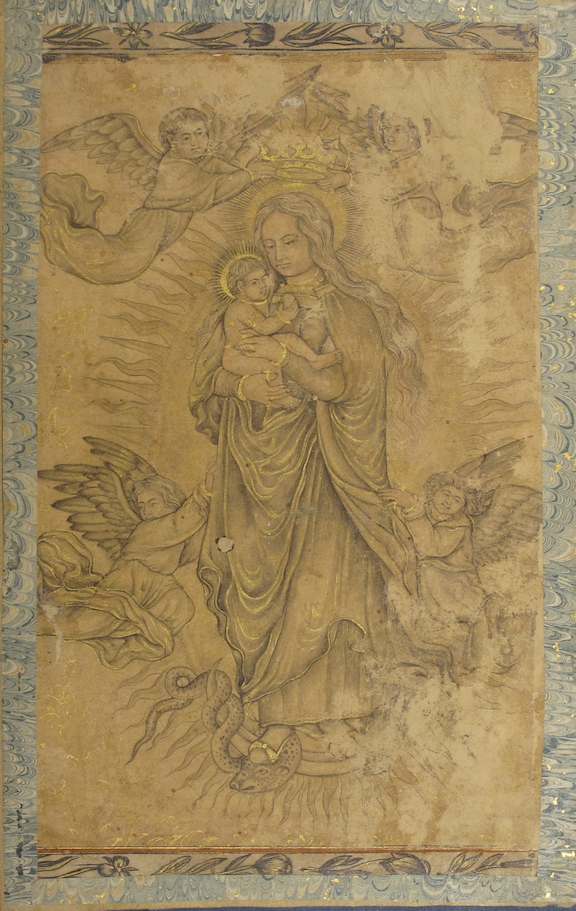 While catalogued by Falk and Archer as Deccani c. 1640-60 (1981, no. 443), it is in fact difficult to see in the drawing any of the specifically Deccani traits mentioned above, especially as another version, undoubtedly Mughal also from around 1600, now in the Freer/Sackler Gallery in Washington (Beach 2012, no. 43), is virtually identical in iconography if not in technique. 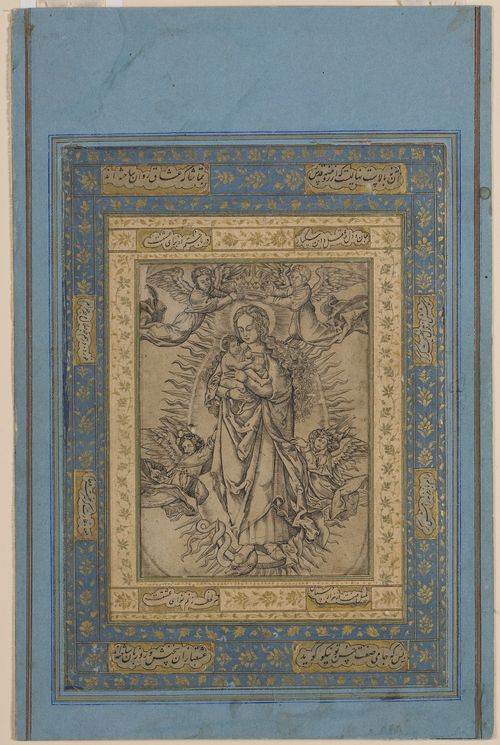 The Sackler version is drawn in such a way as to imitate the European engraving on which it is based, for its shading is achieved either by closely grouped parallel lines or cross-hatching, all drawn in ink with a brush.  The Johnson artist has, as is more usually the case in such drawings, converted the engraved lines into wash, here beautifully modelled and shaded, to produce his three-dimensional effects, and enhanced the effect with gold – gold striations on the garments and gold crown, nimbuses and jewellery. 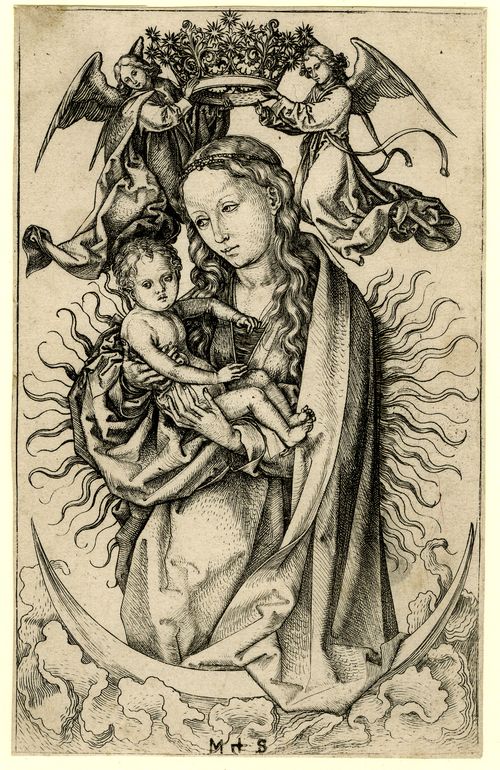 Our drawing has a wonderful softness of the modelling, which in its way is as effective as the original print by Martin Schongauer on which like the Sackler drawing it has been thought to be based.  Schongauer’s original engraving is actually only a half length with the Virgin’s body cut off by the crescent moon while two angels crown the Virgin above.  A full length version as in our drawing is not among the 116 engravings actually by Schongauer.  Other artists such as Albrecht Dürer and Lucas van Leyden also made use of a similar iconography in their engravings showing the Virgin, full length, with or without the Christ Child standing on the crescent moon within a glory, and in the case of van Leyden with four angels, all of which were much copied, but the only print that has yet been found that has all the requisite details of our drawings is contained in a prayer book composed of prints by German engravers from early in the 16th century:  this has the crown, the four angels, the glory, the crescent moon and the serpent, while the Christ Child is also offering a fruit to his mother. 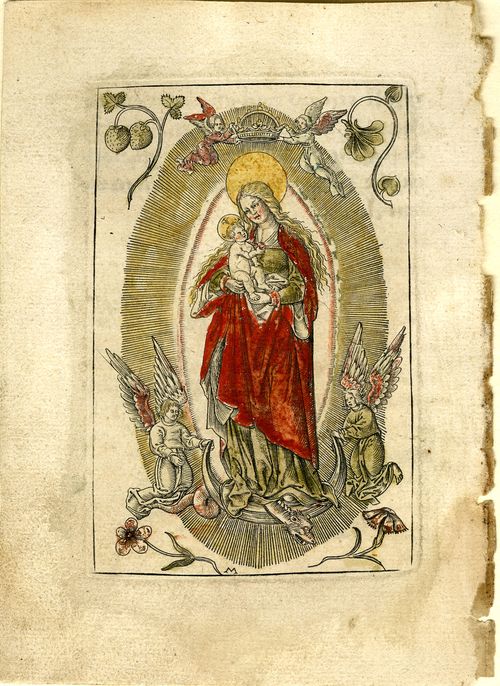 The Virgin of the Apocalypse.  Hand-coloured engraving by Monogrammist M, 1500-25, page from a prayer book of religious prints with Flemish manuscript text.  Page 97 x 65 mm. British Museum, 1868,1114.72. Trustees of the British Museum

This is by a relatively obscure print maker, Monogrammist M, that is very likely after an as yet undiscovered engraving.  The angels are in different positions from our two drawings, the Virgin’s robe is differently arranged and the serpent faces right instead of left.  On the other hand the Virgin’s hair is arranged closer to our drawings than in the Schongauer print while the child also offers his mother an apple.  A study of a version of this prayer-book in a German library (Andresen 1868) concluded that many of the engravings were after other masters such as Lucas van Leyden and Albrecht Dürer, but no such work from these masters actually conforms to all the elements of Monogrammist M’s work or of our Mughal drawings.

Such prints were certainly taken to India, since they also formed the basis of carvings in ivory in Sri Lanka, Goa and also China.  17th century ivory statuettes of the Virgin of the Immaculate Conception (the same iconography but lacking the glory, crown and sometimes the Christ Child), both from Goa and Sri Lanka, show that this iconography was known in South Asia. 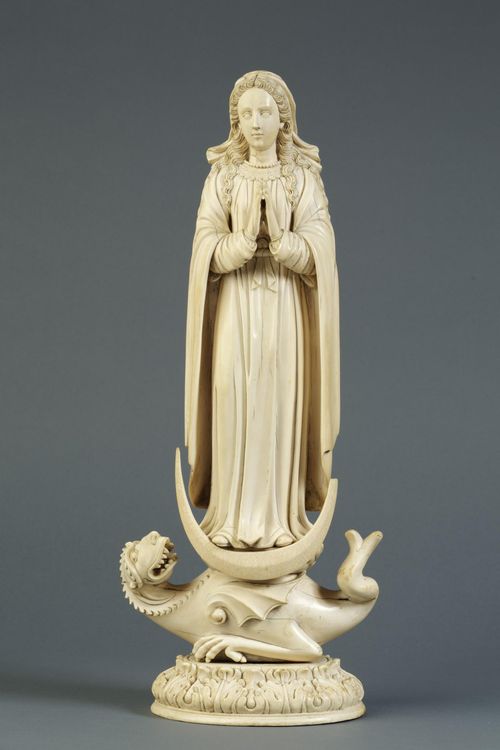 Other ivories from Sri Lanka and Goa are known with this same iconography (see Bailey et al. 2013, pp. 126-29, 188-89). A particularly fine example from China in a private Portuguese collection is an ivory plaque carved in low relief with the subject of the print on which our drawing is based, including the Virgin standing on the crescent moon with four supporting angels but without the Christ Child, crown and serpent (ibid., p. 271).