Today's guest post is by Dr Amy Jane Barnes, a post-doctoral researcher who is carrying out a study on the British Library collection of Chinese propaganda posters, as part of a Cultural Engagement Partnership with BICC, the British Inter-University China Centre. During the course of this project, she will assist the curators in cataloguing the Library’s collection of Chinese propaganda posters, as well as investigate opportunities for its digitisation and display.

Dr Barnes has a background in Asian Art History and her doctoral research looked at the collection, interpretation and display of the visual culture of the Chinese Cultural Revolution in British museums. She is the author of Museum Representations of Maoist China (Ashgate, 2014). 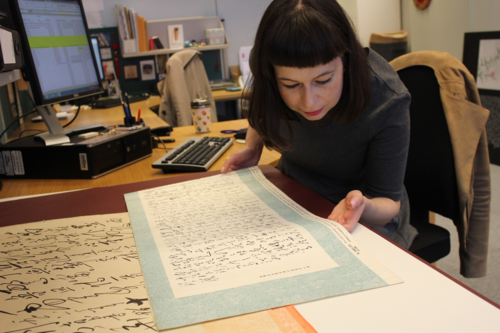 Dr Barnes working in the Chinese section of the Library

During my three months at the British Library I aim to catalogue the Library’s collection of Chinese propaganda posters from the 1950s to 1980s and research several academic papers, as well as investigate the possibilities for digitising and making the collection more accessible to a wider audience. The project also gives me the opportunity to develop my Chinese language skills, albeit a very specialist vocabulary relating to revolutionary ideology!

The first week of the project was predominantly taken up with induction-related activities, sorting out IT access, getting to grips with collections procedures, meeting my new colleagues and investigating the collection in the British Library stores with curator Emma Goodliffe – we found lots of things we were expecting, but a few we weren’t, including an exquisite set of revolutionary nian hua (年画, “New Year’s prints”) dating from 1950. From an initial estimate of around 40 posters, we eventually located over 70. And there are many plan chest drawers still to investigate, so we may yet turn up even more!

With the formalities out of the way, towards the end of the week I started to photograph, research and catalogue the collection. The posters may be organised thematically – there are examples of public information posters, posters relating to the Mao cult, nian hua ‘catalogue’ posters, so-called ‘chubby baby’ posters and a fair number of anti-Gang of Four cartoons and caricatures. But I have begun with a group of posters which depict scenes from feature films and model operas.

For example, one of the posters in the collection, which was published by the Shanghai Revolutionary Press (Shanghai fu chu ban ge ming zu chu ban, 上海巿出版革命组出版) in 1970, depicts, in dynamic pose, the ‘proletarian hero’ Li Yuhe from the revolutionary opera Hong deng ji (红灯记) (“Legend of the Red Lantern”), one of the eight “model works” (yang ban xi 样板戏) performed in China during the Cultural Revolution (1966-1976) (British Library ORB.99/174).

And in another, stills from the 1975 film Feng huo shao nian (烽火少年) (“Beacon of Youth”), produced by the Beijing Film Studio (Beijing dian ying zhi pian chang she zhi, 北京电影制片厂摄制), are accompanied by a synopsis of the plot (British Library ORB.99/171).

The brightly coloured and attractive poster below, for the romantic film Wu duo jin hua (五朵金花) (“Five Golden Flowers”) (1959), was quite tricky to identify at first, given its use of a highly stylised script that barely looks, but I am assured is, Chinese! This style reflects the emphasis on ethnic minority culture in the film’s plot, in which the hero tries to find a girl called Jinhua whom he had met at the same festival the previous year.In the course of the film he meets four other girls called Jinhua (See the plot summary here). Together, they are the “Five Golden Flowers” of the film’s title and are represented, on the poster, in the four roses and the flower held by the original Jinhua, who is seated on a rock at the centre of the scene. At first glance, it may not appear that film has overtly propagandist intent, but commenters have noted that the narrative supports the Great Leap Forward (1958-1961) – a programme of industrialisation and agricultural collectivisation. 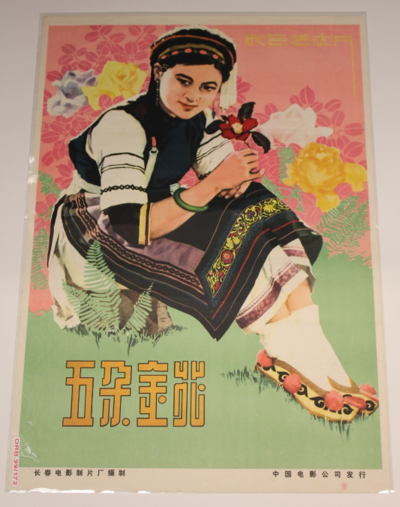 In order to catalogue the items, I am making a record of materials, measurements and content, as well as noting down the condition of each poster and highlighting those that might need the attention of a conservator. I have also been making rough translations of the text that appears on the posters – the types of information we need in order to determine the identity of potential copyright holders, such as publishing houses and distribution companies. My knowledge of Chinese (and set of Pleco flashcards) is expanding exponentially.

Over the next few weeks I intend to continue to photograph and catalogue each item in the collection. Then begins the exciting work of researching them in depth.