In a previous post, I looked at an important drawing of the Virgin of the Apocalypse that had been catalogued as Deccani c. 1640-60 by Falk and Archer (1981, no. 443) and argued that it was in fact Mughal from around 1600.  There are another nine drawings of Christian subjects from the Richard Johnson Collection described as mid-17th century Deccani in the Falk and Archer catalogue (pp. 238-39), but on further examination it seemed harder and harder to justify describing some of them as Deccani rather than Mughal.  This is a difficult area for absolute certainty of attribution, given that we are dealing in most cases with later versions of earlier drawings.   Johnson’s postings are of no help: he was in Lucknow 1780-82 and in Hyderabad 1784-85, but Deccani paintings were freely available in Lucknow as well.  This blog will look at some more of these drawings, trying to disentangle the genuine Deccani from those that are in fact Mughal.

One of Johnson’s specific interests was in Mughal or Deccani paintings and drawings of Christian subjects, which were normally based on European engravings.  These were brought to Mughal India by the Jesuits in particular, who aimed to use such images to help in the conversion of the peoples of Asia.  Akbar’s and Jahangir’s artists painted over and copied such prints as aids in their quest for command of recession and volume and enlarged upon them in various ways without a care for the original iconography.  Although there do not seem to have been any missions sent from Goa to the relatively near Ahmadnagar or Bijapur courts, Christian prints undoubtedly found their way into the hands of these Deccani artists, as evidenced by two drawings in the Freer Gallery (Zebrowski 1983, nos. 83 and 146).  They are clearly different from Mughal treatments of Christian subjects, having a certain angularity and awkwardness about them offset by their calligraphic line or sumptuous colour, which seems typical of what to expect from such material. 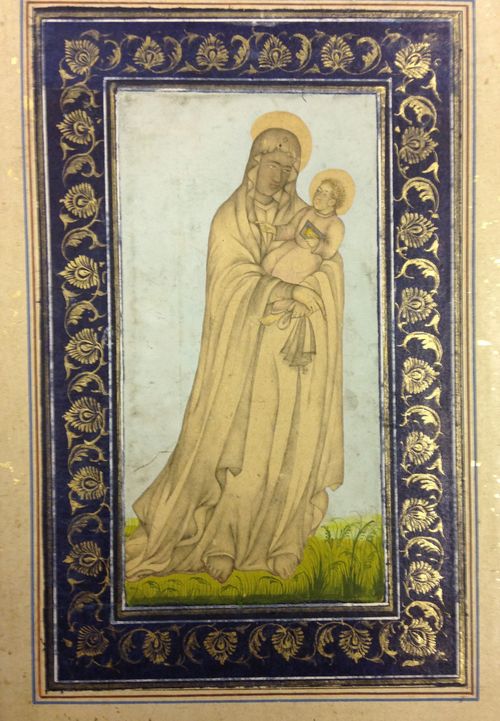 A drawing of a full-length statuesque Virgin carrying the Christ Child is catalogued by Falk and Archer as Deccani 1640-60, but the artist’s interest in naturalistic modelling of the drapery would seem to rule this out. The image is based ultimately on an engraving of the icon in the basilica of Santa Maria del Popolo in Rome, such as one by Giovanni Battista de’ Cavalieri. 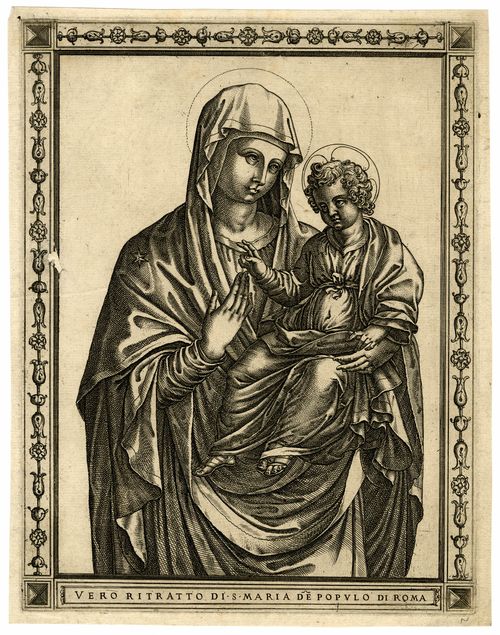 Since the icon like the engraving is only half length the artist has extended it down, perhaps basing his modelling of the draperies on a different image.  The Christ Child’s hand is raised more to touch his Mother’s face than in the print or the actual icon, where it is raised in benediction, but Mughal artists were not slavish copiers and were perfectly capable of adding extra pathos to the icon. The engraver’s modelling through the use of cross-hatching is replaced as usual in our version by a skillful use of wash.  The blue background and the green grass below were added to our drawing later in Lucknow where such additions to drawings or unfinished paintings were commonplace in order to cater to European collectors’ taste.

The Madonna del Popolo differs from the even more venerated icon called the Salus Populi Romani in the basilica of Santa Maria Maggiore in that instead of the latter’s hieratic full face image, she had turned her face down towards the Child.  Several Mughal versions of the Salus Populi Romani as engraved by Wierix are known, including one in the St. Petersburg Album attributed to Manohar.   There seem to have been fewer versions made of our image, although another early 17th century full length Mughal version also with the Virgin interacting with her son as in our drawing appeared at Sotheby’s 26 April 1995, lot 128 (verso), but with the Christ Child’s hand not raised so far up. 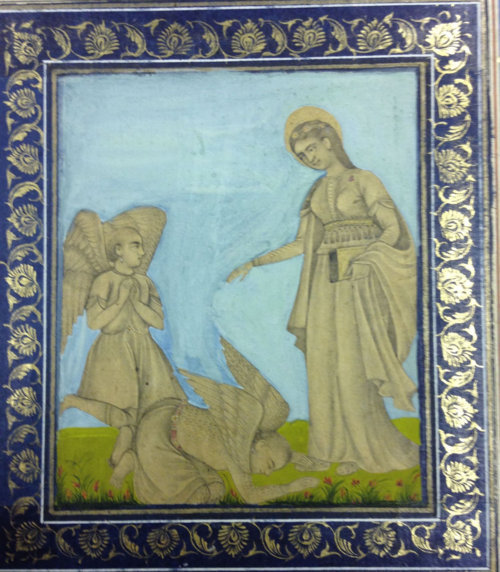 A closely related image with simple wash modelling, again thought by Falk and Archer to be Deccani 1640-60, seems at first sight to be another image of Christian piety, but its origins are more complex.  Two angels are bowing down before a nimbate female figure carrying a book.  The kneeling angel has feathered limbs, the other hovers above the ground with bent legs.  This drawing does not seem to be based directly on an engraving, but rather on an allegorical drawing by the great Mughal artist Basawan from the 1580s.  In that drawing a winged angel bows down before a robed female figure carrying an ektara, a one-stringed musical instrument,and a bow (David and Soustiel 1986, pl. 1).  While one of his allegorical figures now in the Musée Guimet in Paris is based on the frontispiece to the Royal Polyglot Bible printed in Antwerp 1568-72, which was presented to Akbar in 1580 by the first Jesuit mission, Basawan freely adapted it, and also seems to have invented similar types of figures such as the originals of our figures and the next for which no European source has yet been found.  At some stage Basawan’s allegory was converted in the Mughal studio into a more conventional Christian subject.  The female figure has been given a halo and a book, and with her loose hair and in the absence of a veil, is presumably intended to be a saint such as St Catherine of Alexandria, one of whose symbols is a book.  As in the case of Madonna del Popolo above, background and landscape have been added in Lucknow. Another drawing, although closely based on an earlier Mughal allegorical study, appears this time actually to be Deccani. A robed female figure stands fervently praying upwards to the heavens in a landscape, with an altar on which are vessels and a book in front of her and a tall ewer behind her.  A sloping hillside with protruding trees closes the scene.  A very similar earlier Mughal version of this composition appeared at Sotheby’s London 2 November 1988, lot 109, with a similar but more developed landscape, attributed to Basawan 1585-90.  That figure’s hair was tied up in a chignon and a jewelled fillet with an aigrette placed round her hair as was usual with Basawan’s allegorical figures.  In our version our artist has loosened her hair so that it tumbles round her shoulders and placed a red cap sporting an aigrette jauntily on the back of her head.  Her visible ear is absolutely covered with jewelled ornaments.  The wash modelling of the draperies is somewhat perfunctory.  A certain awkwardness in the rendition of her face, the exaggeration of her curly locks streaming down her back and the over-the-top ear adornments suggests that this may indeed very well be Deccani from the mid-century. 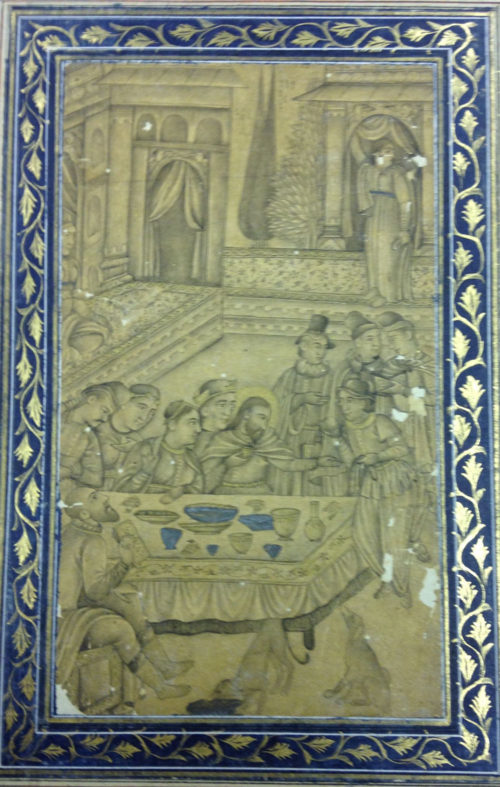 Another slightly damaged drawing is based on a combination of prints including one of the Last Supper.  Jesus has just handed the piece of bread dipped in the dish in front of him to Judas who is standing on the right, thereby identifying Judas as he who would betray him.  The drawing shows some interesting variations, including a combination of sitting and standing disciples, from whatever European sources lie behind it. The disciples, rather less than twelve, are clothed in a mixture of Biblical and contemporary Portuguese costume.  The youthful long-haired John, often depicted leaning on Christ’s chest or shoulder in this scene, has been interpreted as a woman who is now seated on Christ’s right.  The scene is set in a courtyard surrounded by Renaissance arches capped by Mughal chajjas. Two women are at the edges of the composition, one kneeling with a document, the other raising a curtain.The disciples lean forward keen to understand the significance of what is going on.  Another almost identical, contemporary drawing was in one of Warren Hastings’s albums from the collection of Sir Thomas Phillipps (Sotheby’s 27 November 1974, lot 812), there called Mughal mid-17th century, and again there seems little reason to dispute this attribution for our drawing.  No print of the Last Supper seems to include dogs, but Mughal artists often add them to any scenes with Europeans regardless of their source.

In the Johnson collection there are two almost identical drawings showing the Christ Child lying on the ground being adored by a kneeling Virgin Mary in a moonlit landscape.  Two angels stand in adoration to the side while others hurtle down through billowing clouds from the sky above bearing musical instruments, a book and symbols.  The scene is set in the open outside a hut under a rocky outcrop, while Indian hump-backed cattle and sheep inhabit the foreground, the former standing in a stream. No European engraving appears to be directly behind this drawing, although other versions are known, suggesting that the iconography was put together in India. 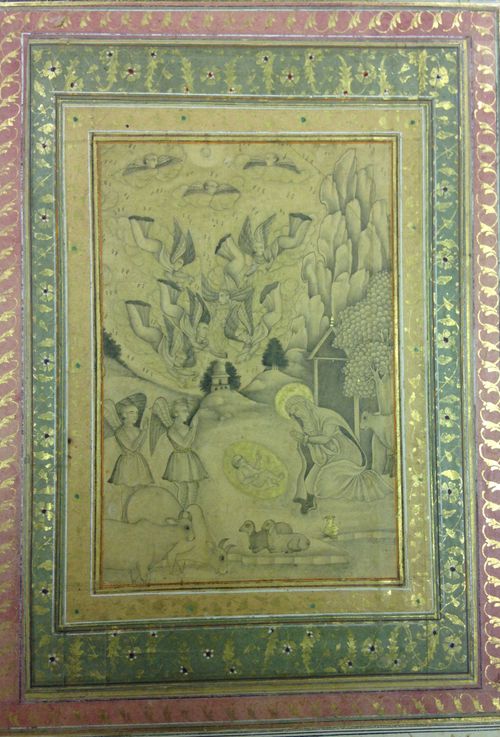 The two standing angels wear short tunics as in J.6, 4 above and have feathered limbs in addition to their wings, while the flying ones have long robes.  In the second version (J.6, 1) one of the standing angels wears a leaf skirt, as if he were a Bhil.  The flying angels’ hurtling progress is found again in a somewhat later Deccani page in the Metropolitan Museum, New York, from Nusrati’s Dakhni Urdu romance Gulshan-i ‘Ishq, in which fairies descend by night to take the sleeping prince Manohar to his beloved (Haidar and Sardar 2015, no. 173).  As with the penitent Magdalen discussed above, a Mughal version lies behind this composition, such as one in the Binney collection in the San Diego Museum (Binney 1973, no. 65).  This seems to be from the early Jahangiri period, judging by the old fashioned piled up rocks in the landscape, which are echoed in the later versions.  It lacks the two adoring angels with feathered limbs, while the angels hover statically in the sky with only their heads and wings visible. Another much closer version of this subject with similarly plummeting angels is in the Chester Beatty Library, Dublin, this time with the standing angels of our versions, who both have leaf skirts as well as feathered limbs (Arnold and Wilkinson 1936, pl. 82).   Both our drawings and the Dublin version obviously are following the Mughal model but augmenting it, certainly with the angels and also with what appear to be large numbers of birds in the sky (or possibly bats since it is night).  What marks these drawings out as Deccani is the highly stylized tree on the right, far removed from the naturalistic tree of the Binney version, so that the original attribution sees correct.

Thank you for the fascinating blog post. The Muslim-Christian encounter in the Deccan certainly deserves more such study. There is a record of at least one Jesuit delegation from Goa coming to Bijapur in 1560, in response to repeated invitations from ‘Alī ‘Ādil Shāh, Sultan of Bijapur. Mention is made of books that were brought as gifts, though I don't know if the historical records mention the gift of any icons or other paintings. Muzaffar Alam and Sanjay Subrahmanyam analyze the visit in their book, Writing the Mughal world: Studies on culture and politics (Columbia University Press, 2012), p. 251-257.