Nineteen beautifully illustrated manuscripts from the British Library’s Japanese collections have now been made available on our Digitised Manuscripts webpage. 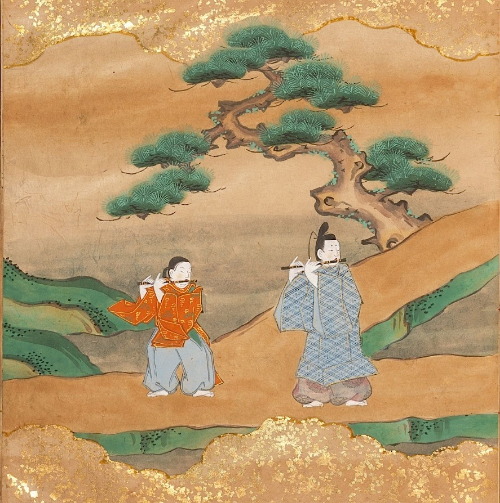 Detail from Aoba no fue no monogatari [The Tale of the Flute with Green Leaves]. Late 17th century (British Library Or 13131)

All but one of them [1] are what are often called Nara ehon 奈良絵本 or “Nara picture books”.  There is academic debate as to the validity of the term Nara ehon but it is generally applied to lavishly illustrated manuscripts, produced from the mid 16th to late 17th centuries, of popular tales known as otogizōshi 御伽草子.  Otogizōshi are a genre of short prose narratives written primarily from the late Kamakura Period (1185−1333) until the Muromachi period (1333−1568), covering a wide range of subjects from fairy tales to war epics, Shinto myths to Buddhist legends - nearly always with an uplifting moral message.

The term Nara Ehon has only been in use since the beginning of the 20th century and no one is certain who coined it or when.  Many scholars prefer the term Muromachi Monogatari 室町物語 or “Muromachi Period Tales” although this does not reflect the important pictorial component.  One widely quoted theory has it that the first examples of this style of illustrated manuscript were produced by artists attached to major Buddhist temples in and around Nara such as the Tōdaiji and Kōfukuji or the Kasuga Shrine.  The upheavals of the 16th century led to economic problems for these religious centres and their in-house artists may have switched from the production of Buddhist texts and images to these more secular and, presumably more commerical, works.  Whether this derivation is correct or not, the varied quality of the extant Nara ehon suggests that not all were the handiwork of skilled artists.  Moreover, given the numbers of manuscripts produced, other centres must also have been involved. 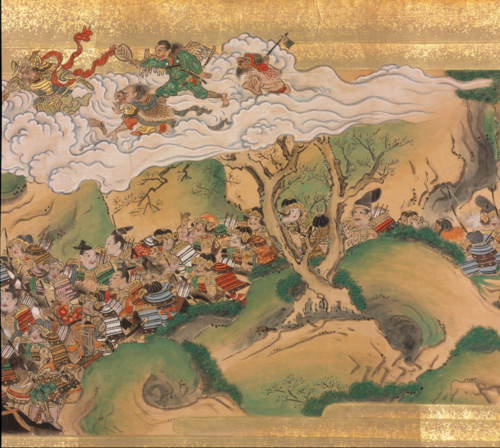 Still, whatever its origins, the term is well established and has yet to be replaced by the more “correct” alternatives devised by modern scholars. To complicate matters further, Nara ehon is loosely used to refer to manuscripts in both book and scroll formats.  We should perhaps make a distinction between Nara ehon (Nara picture books) and Nara emaki (Nara picture scrolls) but even this is not straightforward as some manuscripts that started life as scrolls have subsequently been turned into orihon or concertina-style books (orihon), while some Nara ehon have been remounted as scrolls.

[1] Or 1287 Genji monogatari kotoba is an album of paintings of scenes from the Tale of Genji accompanied by calligraphy by imperial princes and court nobility.

Posted by Ursula Sims-Williams at 12:44 PM