Ānand Rām Mukhliṣ (1697?-1751) was a high-ranking courtier in Mughal Delhi in the first half of the eighteenth century. He came from a Punjabi Hindu family and followed his father into government service as had so many in the Khattri community, a sub-caste traditionally associated with record-keeping. He was wakīl (personal representative at court) for an imperial prime minister and for a governor of key provinces (see Ahmad), and had received the title ʻRajah of Rajahsʼ (rāʾī-yi rāyān) in recognition of his service. Befitting his stellar career as an administrator, he kept a wide social circle and was associated with the most important Persian poets in Delhi. 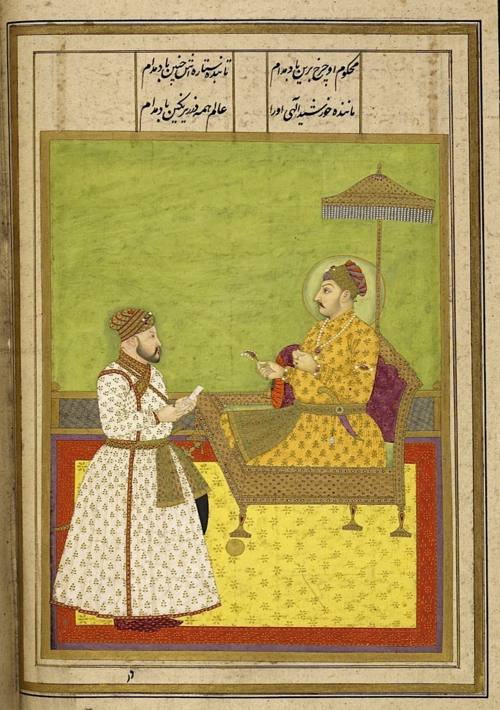 Despite the increasing political difficulties of the Mughal crown over the course of the eighteenth century and the hardships endured by Delhi’s inhabitants during successive invasions and waves of unrest, the Indo-Persian literary culture in which Mukhliṣ participated was thriving. There were lavish poetic gatherings (mushāʿirahs) and a person’s literary comportment, namely his mastery of both poetry and prose, was still considered indispensable for political life. Meanwhile scholars were churning out dictionaries and critical tracts, and stretching the limits of Persian literature’s critical tradition, in some cases coming to strikingly modern conclusions about the nature of language and literary aesthetics.

The writing of history is obviously constrained by the sources available and in researching Indian history it is often difficult to find the right material to be able to zero in on particular individuals and their thought. Most Persian texts written in India remain unpublished and are only accessible in manuscript. The British Library’s manuscript holdings are probably unparalleled in the world for being able to provide information about Mukhliṣ and his contemporaries. Most excitingly, the Delhi Persian collection is full of mid-eighteenth-century Indo-Persian critical and educational texts. (Though the collection has always been available for consultation, it is only with the digitisation a few months ago of the notes for a never-published catalogue that many scholars knew of its holdings.)

Mukhliṣ was a prolific and varied writer. He was both a practicing poet and a professional bureaucrat, which at this time required mastery over a range of elegant prose composition styles including letter-writing. He was also a memoirist and wrote about his travels (see Alam and Subrahmanyam 1996). 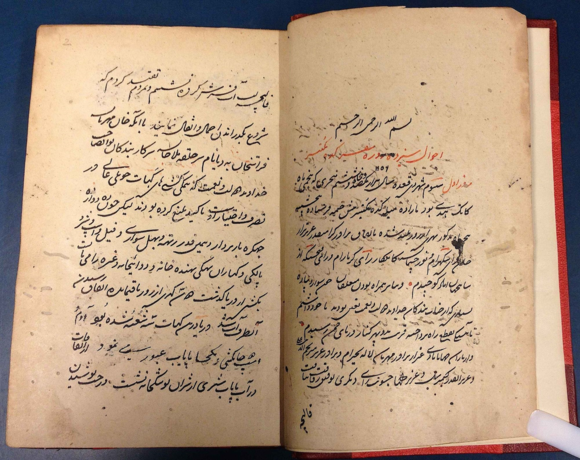 As a scholar of literature, calligraphy, and painting he wrote works such as the dictionary Mirʾāt al-iṣt̤ilāḥ (which will be the subject of a later post). At least one of his works, the Kārnāmah-yi ʿIshq ʻBook of Affairs of Loveʼ was lavishly illustrated, as explored in a previous blog post by Malini Roy. In writing about his life, scholars have unfortunately not been as prolific as Mukhliṣ himself was. The only monograph on Mukhliṣ—in any language as far as I know—is the published version of a Delhi University PhD thesis from decades ago (James 2011).

Prince Gauhar and Khiradmand rescued by the simurgh 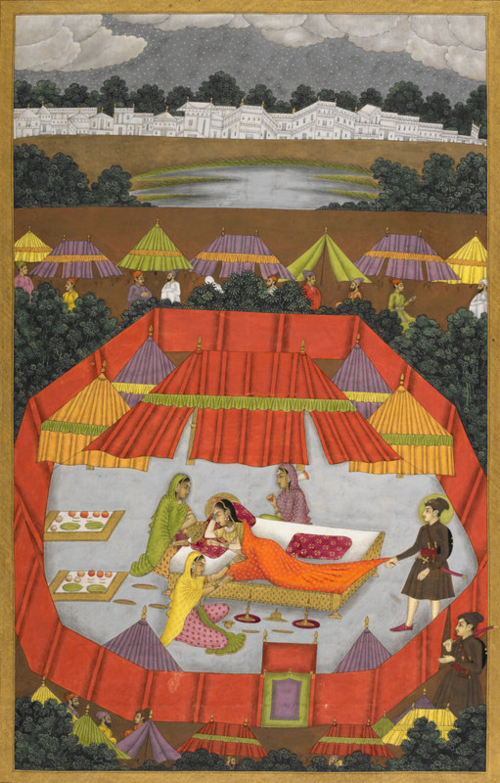 From Kārnāmah-i ‘ishq, the love-story of Prince Gauhar and Princess Malikah-i Zamani composed in 1731. In this scene Prince Gauhar removes the coverlet from the sleeping princess as proof of his presence in her tent. Artist: Govardhan II, c.1735 (British Library Johnson Album 38, f. 81v)

Mukhliṣ’s house was a meeting place for the great writers of the day. He received his established literary friends as well as poets whom he supported as they tried to make a name for themselves in Delhi. One of his close friends, Ṭek Chand Bahār, not only had a similar career path in the Mughal bureaucracy but like Mukhliṣ wrote a dictionary, the mammoth Bahār-i ʿajam (see a previous post by Muhammad Isa Waley). Both Mukhliṣ and Bahār were friends and students of Sirāj al-Dīn ʿAlī Khān, known as Ārzū, a poet who might be the greatest philologist (that is, what we would call a literary critic and linguist) in the pre-modern Persian tradition (see Dudney 2013). Although Mukhliṣ considered Ārzū one of his teachers and Ārzū was about a decade older than Mukhliṣ, it was Mukhliṣ who facilitated Ārzū’s entrée into Delhi’s elite cultural scene when Ārzū first settled in the city. 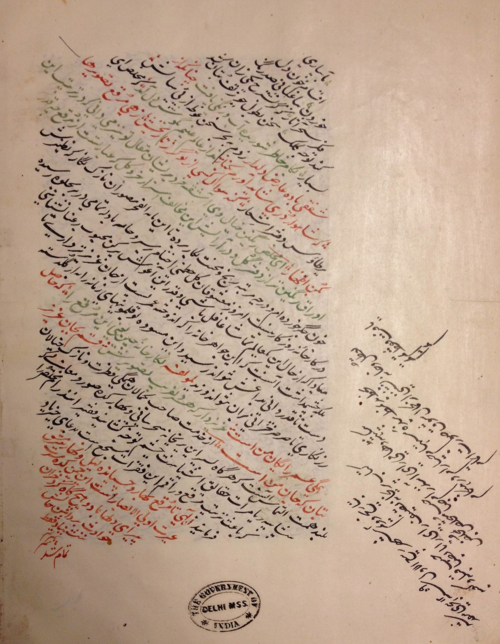 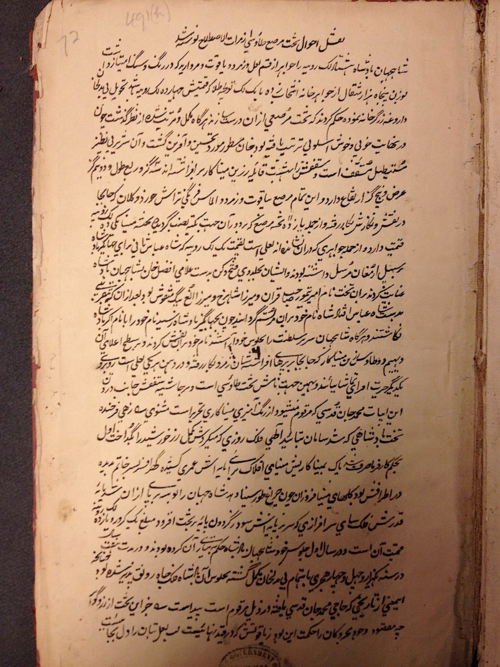 Every poet had a network of loyalties to his teachers, students, and contemporaries. Mukhliṣ appears to have been associated with a wide network of Hindu Persian writers, as a rare miscellany in the British Library (Delhi Persian 491—for details, see below) suggests by presenting his works alongside those of contemporary Hindu writers. (On Hindu Persian poets in Delhi, see Pellò 2014) Contrary to the received wisdom that a failing political order produces a failed literary tradition, I see the eighteenth century as a time of great innovation in Indo-Persian poetry. Poets were debating the role of tradition as never before and literary criticism was incredibly vibrant. Urdu’s development as a literary language was part of this innovation.

At this time, the literary tradition that would come to be known as Urdu was part of Indian Persianate culture, not an alternative to it. Mukhliṣ lived in the time when the Persian-using and Urdu-using community of Delhi were one and the same—this fact tends to get lost in later accounts that want to emphasise the break between Persian and Urdu—and while he has no surviving Urdu compositions to his name, there is no sense that he is holding himself apart from Indian culture by being an expert in Persian.

Mukhliṣ is relevant in our time because he confounds expectations about India’s past. Some today seek to define Indian culture as static, monolithic, and synonymous with the modern understanding of Hinduism. However, the existence of historical figures like Mukhliṣ is at odds with the worldview of such revisionists. He was perfectly at ease with Persian, even using Islamic devotional formulae in his writing, while being in the eyes of those around him and in his own mind unproblematically a devout Hindu, whatever that meant at the time.

One other item for further reading is the English translation of the Mir'at al-Iṣṭilāḥ by Tasneem Ahmed:

...and a recently published Persian critical edition of the same work:

Not including references to the published editions of Mir'at al-Iṣṭilāḥ here was an oversight—they were to appear in a second post devoted to Mir'at al-Iṣṭilāḥ that will follow. The English translation was a commendable undertaking but it is often confusing or misleading, and for that reason I would recommend that serious scholars only use it alongside the original text rather than as a replacement for the Persian. The editors of the Persian critical edition did good work.

As a colleague reminded me, there are reasons to think that Dastūr al-ʿamal (mentioned in the list of mss above) was not actually written by Mukhliṣ but rather by a near-contemporary also called Ānand Rām who held a more humble bureaucratic post. The text does not actually mention Mukhliṣ’s pen-name nor refer to any biographical or bibliographical specifics. Ethé implies that the author’s many quotations of Bedil serve as evidence of the author’s identity but of course quoting Bedil in eighteenth-century India was hardly unusual. I would be grateful to anyone who could provide more information.