Nian hua or New Year prints are bold and colourful Chinese woodblock prints, which date back at least to the seventeenth century (Lust 1996: 1). Mass-produced, affordable and designed to celebrate most notably the Spring Festival (also known as ‘Chinese New Year’), they are typically full of auspicious symbols for conferring wealth, longevity, happiness and good fortune on the family. Deities such as stove and door gods, flora and fauna, including the animals of the Chinese zodiac, and well-fed male babies are all common subjects of these posters. 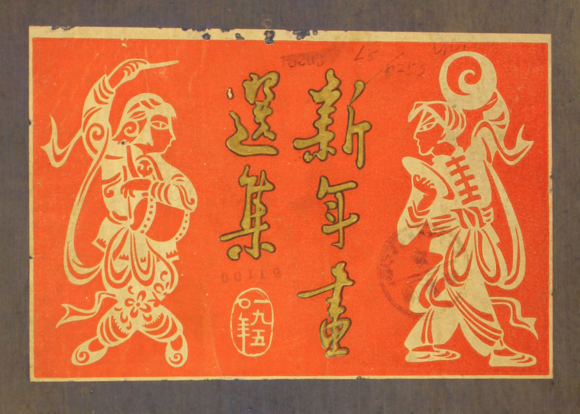 The Chinese Communist Party (CCP) promoted new or ‘revolutionary’ nian hua as early as the second half of the 1920s, because the woodblock print was an attractive, familiar and accessible format, it appealed to the target rural audience, and was easily and widely distributable. Crucially, it was a uniquely ‘national’ form (see Hung 2000: 775; Flath 2004: 146); something ‘past’ which could, to paraphrase Mao Zedong, ‘serve the present’. But the communist authorities did away with subjects associated with religious and so-called ‘feudal’ beliefs, replacing them with revolutionary themes, and shifted production from local workshops to state supervision. In his important study of nian hua, James Flath (2004: 139) recounts a discussion between Mao Zedong and Gu Yuan, a famous print artist, about new nian hua: Mao ‘suggested that Gu Yuan design new “Door Gods” to replace the traditional styles. “How shall I draw them,” Gu Yuan asked; “You know, I don’t believe there really are any gods.” Mao answered, “Make them look like peasants.”’. Hung (2000: 779-780) notes that the door gods ultimately transmogrified into peasants, workers and soldiers: the Maoist trinity.

After the establishment of the PRC, while woodcut-style prints remained popular (as we will see below), new nian hua started to incorporate the work of artists working in different types of media and genres (Shen 2009: 10). From the 1950s on, we begin to see reproductions of oil and brush-and-ink paintings, for example, reproduced as nian hua. Unlike other types of propaganda poster, which were produced all year round, revolutionary nian hua, much like their pre-revolutionary antecedents, were designed and published with a view to getting them in book shops and other outlets in time for the New Year festivities.

I would like to focus here on the set of bold and colourful woodblock-style nian hua in the British Library collection briefly mentioned in my last post. Each print is by a different artist based in provinces and cities across the nation. While they make use of a woodblock-style aesthetic, it is likely that they were actually printed using offset lithography, which allowed for ‘flexibility’ and ‘freedom’ in the design and manufacturing process and, presumably, sped up and facilitated mass production (Hung 2000: 776).

The set was published in 1950, around the time of a major CCP directive calling for the production of new nian hua and the genre’s heavy promotion via exhibitions and special publications (Hung 2000: 776; Flath 2004: 146). The fourteen nian hua, presented in a blue silk-covered folio, reflect the early concerns of the People’s Republic of China (PRC), just a year after its foundation, particularly land reform (which saw the redistribution of agricultural land from landowners to peasants), but also policies promoting literacy and agricultural production (many of the prints in this set depict bountiful harvests). Several others reflect or perhaps, more accurately, promote the burgeoning personality cults of Mao Zedong and his Inner Mongolian counterpart at that time, Chairman Ulanhu, also known as Yunze. The prints are in a modified nian hua style that Flath (2004: 143) credits to the afore-mentioned Gu Yuan: a narrative style with a ‘simplified political message’.

In Sheng chan ji hua (生产计划), ‘Making a plan’, by Liu Jilu (劉繼鹵), of Tianjin – a city in north-east China – a group of peasants are shown engaged in discussion and drinking tea while resting in a field. In the background, a number of other labourers plough the field with oxen. The titles, artists and place names are given in traditional characters, for simplified characters were not introduced until the mid-1950s, several years after the publication of this set of nian hua. 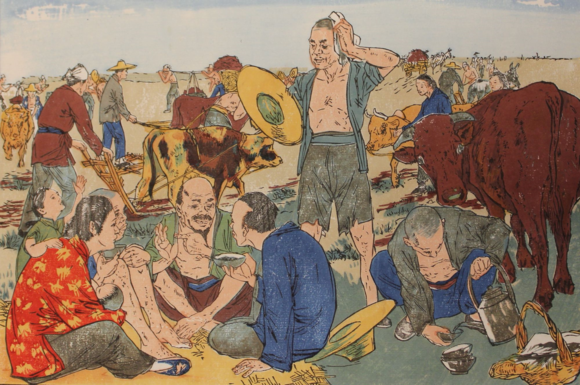 A number of the prints that deal with ‘ethnic minority’ subjects also feature titles translated into Mongolian and Tibetan. For example, Jian zheng huan xuan hao ren (建政懽選好人), ‘Good people happily select a government’, by an Inner Mongolian artist, whose name is transliterated in Chinese to ‘Wulejibatu’ (烏勒吉巴图), depicts a busy scene of people voting, perhaps for local representatives. The Mongolian text above the frame gives a similar title. (With thanks to Eleanor Cooper, Curator of Manchu and Mongolian collections at the British Library, for translating the Mongolian script used on several of the nian hua prints). 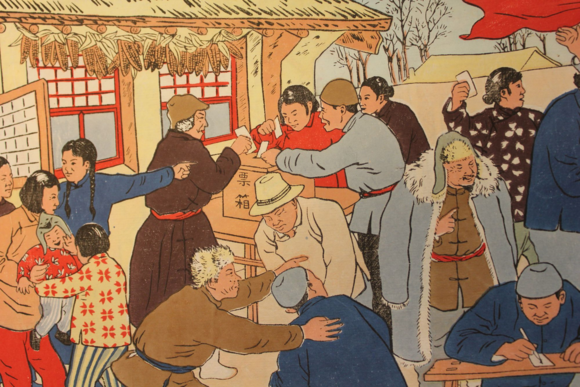 Despite their heavy promotion, the new nian hua failed to appeal to the masses, according to Hung (2000: 784-798). People had enjoyed the old, familiar stories purged from nian hua by the cultural authorities, and the new versions were too naturalistic compared with the stylised representations and techniques of the old prints. The new nian hua were thought of as elitist by the very audience to whom they had been designed to appeal; some were considered to be insufficiently colourful, as muted colours were selected over bright, while others were deemed too colourful, using a larger palette than consumers of old prints had been used to; and they were no longer ‘auspicious’, devoid of their old meanings and unfit for purpose. Hung (2000: 798- 799) provides evidence that the new nian hua were largely, and unsurprisingly, a flop. Their production - at least in this form, imitating woodblock prints - dramatically dropped towards the end of the 1950s. These examples are, therefore, very much of their time and, while they were not necessarily favourably received by their intended audience, they provide much evidence of a period of rapid cultural reform and the key policy concerns of the CCP in the early years of the People’s Republic.

Other collections of nian hua:
Examples of traditional nian hua can be seen in James A. Flath’s gallery of prints online.
The Ashmolean Museum holds similar folios and prints.
Prints are also found in the Royal Library of Denmark (not yet digitised).

Posted by Annabel Gallop at 6:46 AM