A Dictionary Packed with Stories from Eighteenth-Century Delhi

In a previous post (When Good Literary Taste Was Part of a Bureaucrat’s Job Description) I introduced readers to the high-ranking courtier, poet and writer Ānand Rām Mukhliṣ (1697?-1751). Here I focus on his idiosyncratic dictionary, the Mirʾāt al-iṣt̤ilāḥ (ʻMirror of Expressionsʼ) completed in 1158/1745, which provides us with a delightful hodgepodge of cultural and social information about eighteenth-century India 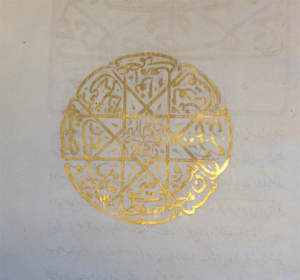 The biographical note on a certain Rājah Harīsingh from Sialkot, for example, which describes him as peerless in archery and entertaining (ʿilm-i majlis), is a little unusual in its detail but unremarkable for this book:

On dark nights he shot by torchlight at a target made from knot of horsehair. He had a servant named Gopī… [Gopī] would place a piece of candle on the tip of his finger, set a lentil on it, place a grain of rice on top, and stand facing the Rajah, and the Rajah bent his bow. First he knocked the rice then the lentil then the candle from his finger. Neither did the Rajah make a mistake nor did the unjust [sic] servant frown. Now I come to his knowledge of entertaining...
(Mukhliṣ 2013: 238, my translation). 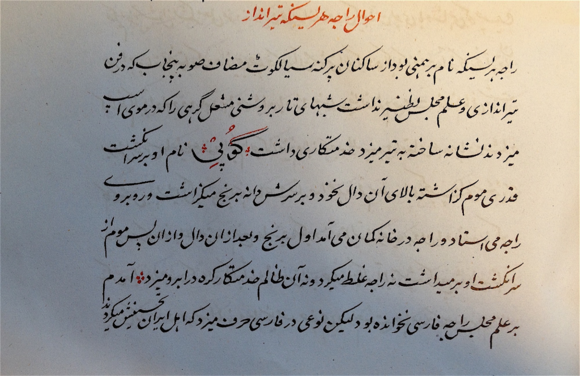 Biography of Rājah Harīsingh from Sialkot inserted into an explanation of the phrase tīr-būtah ʻarchery rangeʼ (British Library Or.1813, f. 90r)

The account continues by explaining that the Rajah had not studied Persian but could make conversation so impressively in the language that Iranians praised him. He also recited poetry in Hindi and Persian. He was a musician himself, and kept qawwāls (Sufi singers) and dancing girls in his retinue. This was a man who clearly knew how to throw a good party.

Historians delight in such specific descriptions of particular people in history, but it is of course unusual to find them in a text that purports to be a dictionary. In this case, the account of the Rajah fits into an entry on tīr-būtah (meaning an archery range). An elegantly written copy of this remarkable dictionary—or perhaps it is better to see it as a miscellany cast in the form of a dictionary—is available at the British Library in manuscript (Or.1813) and has recently been printed in a critical edition (Mukhliṣ 2013). Besides providing us with details about life in eighteenth-century Delhi, even a cursory reading of the text demonstrates the richness of Persian scholarship and literary society in late Mughal India.

The historical importance of Persian in India has all but faded from modern cultural memory, but it was undeniably the key medium of expression among north Indian elites during the Mughal period. Though Persian is written in the same script as Arabic and therefore often pigeonholed as an Islamic language, Persian was a secular language in pre-modern India in the sense that all communities had access to it (though there was a class divide—it was mostly an elite language) and many Hindus like Mukhliṣ made their living by mastering it. The parallels between the Persian of pre-colonial times and the English of today as languages of personal advancement in South Asia are striking. (For more on this, see my new book Delhi: Pages from a Forgotten History (Dudney 2015), which addresses the history of Persian in India in far more detail than I can here.)

The composition of Mukhliṣ’s dictionary came at a time of great uncertainty for Delhi’s elite. Patronage for poets and indeed the whole political system was being renegotiated in the wake of Nādir Shāh’s conquest of Delhi in 1739. Nādir, ethnically a Turk, had conquered the whole of Iran and the region that became Afghanistan and turned next to India. It is undeniable that politics were by then quite different from how they were in the Empire’s glory days, but it is almost eerie to trace how literary culture not only carried on but arguably shone with greater brilliance in the aftermath of the worst bloodshed Mughal Delhi had ever seen. 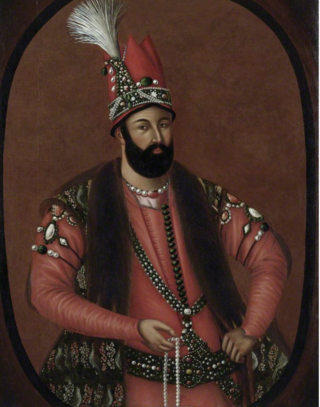 Mirʾāt al-iṣt̤ilāḥ has a particular interest in administrative terminology as well as in words and expressions having to do with painting, clothing, handicrafts, animals, flowers, hot beverages (particularly coffee), games, and so on. It is different from other Persian dictionaries in that it contains a great number of  ʻproto-anthropologicalʼ observations as well as long digressions describing, for example, particular people that Mukhliṣ knew such as the poet and scholar Sirājuddīn ʿAlī Khān Ārzū (briefly defining the term ārzū as ʻhope and desireʼ in as many words serves an excuse to launch into several hundred words of praise for his friend and teacher) or objects like the Peacock Throne. Additionally, it ends each letter’s section with a series of adages (amsāl), some of which have Urdu equivalents provided. 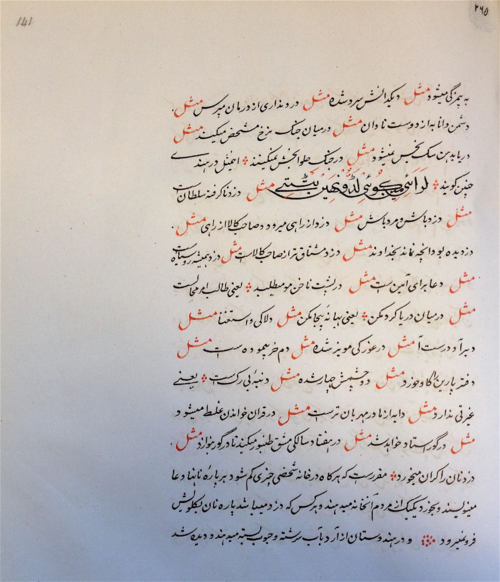 In this passage the expression dar jang ḥalvā bakhsh nimīkunand  [During war they don't hand out sweets] is rendered in Hindi (written in a special calligraphic script) as laṛāʾī meṁ koʾī laḍḍū nahīṁ baṭte —Indian laddus have been substituted for halwa (British Library Or.1813, f. 141r)

Despite these unusual features, Mirʾāt fits squarely into a remarkable tradition of Persian lexicography that began in Central Asia and continued in the Indian Subcontinent, with virtually no counterpart in Iran. In fact, there is a gap of nearly three centuries between Surūrī’s Majmaʿ al-furs (first ed. 1008/1599-1600, compiled in Isfahan) and the next major dictionary written in Iran, Riẓā Qulī Khān Hidāyat’s Farhang-i anjuman-ārā-yi nāṣirī (1288/1871, compiled in Tehran). (The fullest account of Persian lexicography in English remains Henry Blochmann’s 1868 article)

Like earlier dictionaries, Mirʾāt bridges different usages around the vast region where Persian was a language of high culture, a region that at its peak stretched from Anatolia (modern Turkey) in the west across Central and Southern Asia to the Chinese frontier in the east. Scholars debate the question of how different Indian Persian was from Iranian Persian—remarkably there has been little dispassionate analysis of this topic since the starting point is usually the misleading assumption that Indo-Persian, whatever it was, could not have been ʻauthenticʼ compared to Iranian usage. That is a discussion for another time but worth mentioning in the context of Mukhliṣ’s scholarship because he was so attuned to how different people used words and expressions.

There is an apocryphal story that Mukhliṣ chased after the Qizilbash soldiers of Nādir Shāh’s army to ask them about points of Persian usage. The logic is that they were native speakers, and he wanted to know how Persian was really spoken. One difficulty in this story is that these soldiers were not actually native speakers in our sense because in daily life they either spoke Turkish dialects (like Nādir Shāh himself) or local variants of Persian. The category of native speaker (usually translating the term ahl-i zabān) is a problem in this context because literary Persian was a learned language. Mirʾāt was part of this economy of teaching Persian. The entry in Encyclopaedia Iranica claims that Mukhliṣ’s dictionary was intended to “to improve the falling standard of Persian in India”—but its preface does not in fact say anything like that (and indeed though there is a reference to īrān-zamīn [the land of Iran] in the colophon, this was written in 1850, a full hundred years after Mukhliṣ, and therefore cannot be assumed to reflect his thinking). Even the editors of the 2013 critical edition claim that “It can be seen from a close reading of the text that after finishing the work, he got it authenticated from speakers of the language just arrived in India” (2013: 33, English introduction). While some of his material comes from such people, the implication is wrong: He was asking them not because he thought of them as ʻnative speakersʼ but because they knew administrative terminology current in the establishment of Nādir Shāh, who having just conquered Delhi had modified the administrative structure to suit his needs. To find positions under the new regime, Mukhliṣ and his colleagues needed to be savvy in the new terms and procedures. It was not that Indian elites were desperate for Iranian native speakers to sort out their degenerate Persian but rather that they sought insider knowledge about the new political dispensation.

People were interested in Mukhlis's Hindi adages, so I've collected a few more at my personal blog:
http://splendidcities.blogspot.co.uk/2016/01/eighteenth-century-hindi-sayings.html

I'd like to explore these further, because of the thirty or so I found in the dictionary, none is familiar (at least to my knowledge) in modern Hindi/Urdu. It's a great opportunity for a bit of linguistic archaeology.