Last Chance to See: Records of a lunar eclipse from over 3,000 years ago

FINAL WEEK: The exhibition ‘Beyond Paper: 3000 Years of Chinese Writing’, which features the oracle bone described here, is on display in the Sir John Ritblat Gallery at the British Library until 17 January 2016.

Today’s post was written with the help of Dr Roberto Soria, a Senior Research Fellow at the International Centre for Radio Astronomy Research, Curtin University in Western Australia. We are grateful to him for his expertise and valuable contributions.

The significance of the inscribed oracle bones of the Shang dynasty (c. 1600-1050 BC) for the study of Chinese civilization cannot be overestimated. Not only do they bear the earliest known examples of the Chinese written language and are therefore of great significance to linguists, but they are also the earliest primary source of documentary evidence for a much-disputed period of Chinese history. Through deciphering these texts scholars gained unprecedented insight into the concerns of the time, sometimes with astonishing historical detail. An excellent example of this is Or.7694/1595 (Yingcang 886)[1], a bone from the Couling-Chalfant collection at the British Library, which records a lunar eclipse that can be precisely dated to the night of the 27 December 1192 BC. 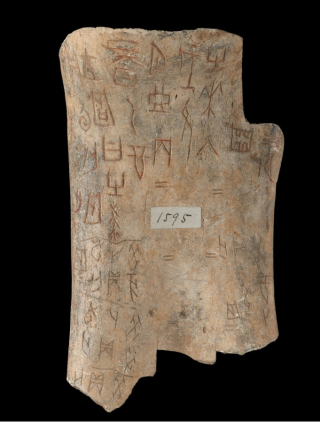 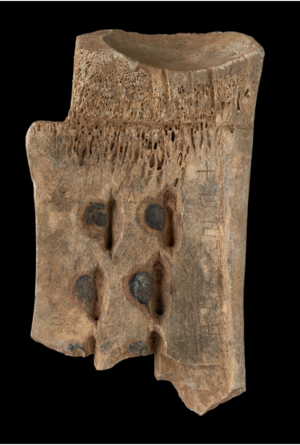 Oracle bones – primarily the shoulder bones (scapulae) of sheep or cattle and the flat under-shells (plastrons) of tortoises – were central to an ancient divination ritual during which questions were posed to the ancestors of the Shang royal house and the answers interpreted from the distinctive Ⱶ-shaped cracks that formed in the bones when heat was applied to pre-prepared hollows on the underside. Although this practice, known as ‘pyromancy’, can be traced back to Neolithic times, its heyday seems to have been during the last two centuries of the second millennium BC (i.e. the late Shang) when the Shang cult centre was at Yin 殷, near modern-day Anyang. Over 150,000 oracle bones are thought to have originated from there, approximately 50,000 of which bear inscribed records of the questions, answers and outcomes of the divination process.

Central to this divination ritual is the belief that the ancestors of the Shang ruling house had the power to predict and influence events on earth. The extent of their perceived influence is evident from the range of topics touched upon in the oracle bone inscriptions, including warfare, agriculture, hunting, dreams, illness, natural disasters and astronomy. The darkness caused by a solar or lunar eclipse was deemed a negative omen, indicating an ancestor spirit in need of mollification.

The text inscribed on Or.7694/1595 records one such lunar eclipse and even includes evidence of the date on which it occurred. In the introduction to Oracle Bone Collections in Great Britain (Allan, Li & Qi 1985) it is described as ‘a series of inscriptions proposing that there will be no misfortune during the coming ten-day week. Following the inscription made on the gui-chou day (50th of 60-day cycle), a verification inscription on verso confirms a lunar eclipse on the geng-shen (57th) day.’ This ‘verification inscription’ reads as follows:

Over the years, a number of studies have been carried out by astronomers and sinologists alike in order to calculate the precise date of this and other eclipses recorded on oracle bones according to Western dating conventions. The date for this particular lunar eclipse has been verified as having taken place between the 27th and 28th December 1192 BC. Dr Roberto Soria has confirmed that the total phase of the eclipse, viewed from Anyang, would have lasted from 21:48 to 23:30 (±17 minutes) local time.

This is shown in a diagram generated by NASA: 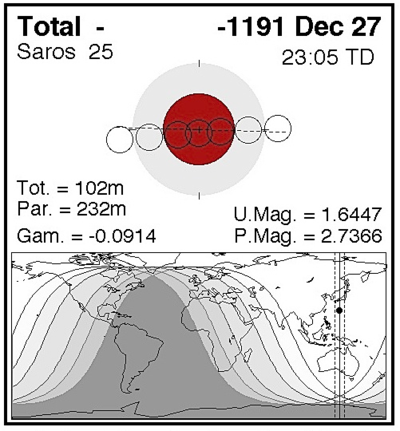 According to Dr Soria, the historical dates and times of lunar eclipses are also important to geologists and astronomers because they allow them to measure how the earth rotation has been slowing down over the centuries. The average day has got longer by about five hundredths of a second since the Shang dynasty. This may seem like a small quantity, but a difference of a few 1/100 seconds each day, 365 days a year, over 3000 years, means a total delay of several hours accumulated from the Shang dynasty to today.

Interestingly, there is another bone which refers to the same lunar eclipse held in the Hopkins collection at Cambridge University Library (CUL 1, Yingcang 885), one of the nearly 900 oracle bones purchased by Lionel C. Hopkins (1854-1952) from the American Presbyterian missionary Frank H. Chalfant (1862-1914) who also helped to form the collection here at the British Library.

[2] The Roman calendar introduced by Julius Caesar that was later superseded by the Gregorian calendar.

Posted by Ursula Sims-Williams at 12:45 PM