Among the beautiful illustrated Burmese manuscripts held in the British Library is one containing painted scenes from Burmese dramas, including the tale of Inaung and other stories. Acquired from a collector in 1889, this manuscript, Or. 3676, is an album containing 19 folios of painted scenes in a delicate style on thick paper, with a European quarter-leather binding. Some of the scenes have short captions in Burmese and English, and many illustrate the romantic intrigues of Prince Inaung. 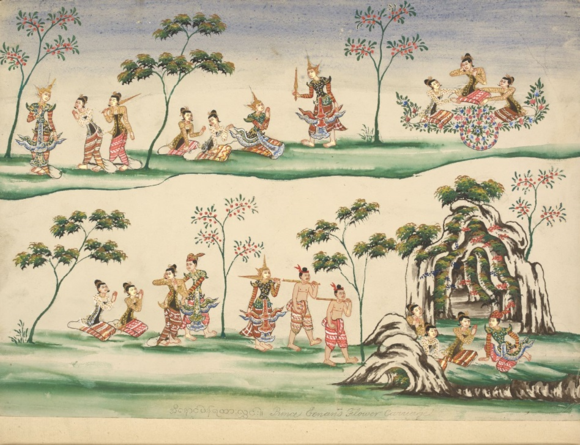 The early Burmese dramatists drew on the Jatakas or Birth stories of the Buddha, and popular dramas (pyazats) were produced for entertainment. In the eighteenth century, Burmese drama flourished at the royal court, and the earliest play, Maniket Pyazat, was written in 1733 by the court poet Padesaraja (1684-1752), based on his own poem Maniket Pyo. Burmese court drama really began to develop at the beginning of the reign of King Bodawpaya (1782-1819), and dramatic performances of the Ramayana emerged in the Konbaung Period (1752-1885). It was Myawaddy Mingyi U Sa (1766-1853), a Konbaung-era Burmese poet who served under four kings in various capacities, who dramatized the Ramayana. He also dramatized the story of Inaung (based on the Thai story of Inao, itself derived from the Javanese Panji cycle of stories about Prince Inu Kertapati), narrating the love story of Prince Inaung and Princess Putsapa. These two plays were exceedingly long and took several days to present in their entirety. 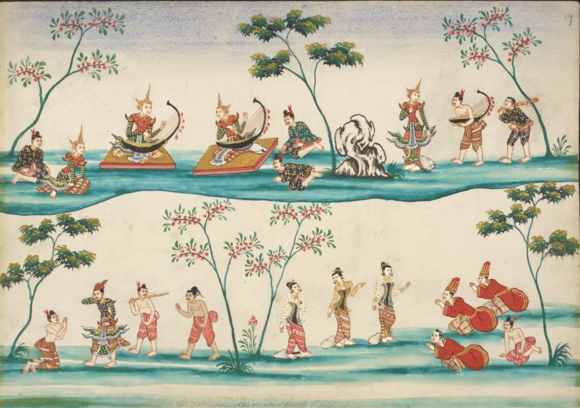 The 550 Jataka stories are popular stories of former lives of the Gautama Buddha, which are preserved in all branches of Buddhism, and have been translated into Burmese. Minbu Sayadaw U Awbatha, who was famous during the reign of Bodawpaya, wrote the ten principal ones, and his style of Burmese prose literature became a model for later writers. These stories of the former lives of Buddha are inspiring and invaluable for Burmese people, and most Burmese dramas are based on events from these former births of Gautama Buddha. 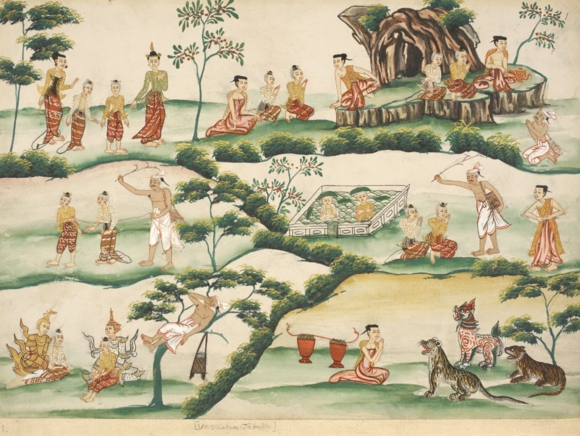 'Generosity in charity'. The above painting depicts Vessantara giving away his two children to a Brahmin who wants them as slaves for his young wife. At bottom right, Ma-di, Vessantara’s wife and mother of the children, who had gone to fetch fruits in the forest for her family, is confronted by the animals on her return home. At bottom left, two deities look after the children while the Brahmin sleeps on the tree. British Library, Or. 3676, f. 1

Court dramatists, such as U Ponnya (1807-66) and U Kyin U (1819-53), were often persuaded to produce dramatic works. U Kyin U was a composer and playwright during the reign of Bagyidaw and at the court of King Mindon. One of U Kyin U’s plays is Vessantara Jataka, on the previous life of Buddha. This story is about the great generosity of Prince Vessantara. The prince’s generosity is unrivalled, but when he gave away the white elephant which ensured adequate rainfall for his country to a neighbouring country which was facing a drought, his citizens became enraged, and forced his father the king to banish him. His wife chose to share his exile with their children. After giving away all his possessions, Vessantara and his family lived in the forest. While his wife went to fetch fruits in the forest, Vessantara gave his children, a son and daughter, to a Brahmin who wanted them as slaves. The king rescued his grandchildren from the Brahmin and his wife, and invited his son and daughter-in-law to return to the palace. Once the family was reunited, Vessantara became king and all lived happily ever after. 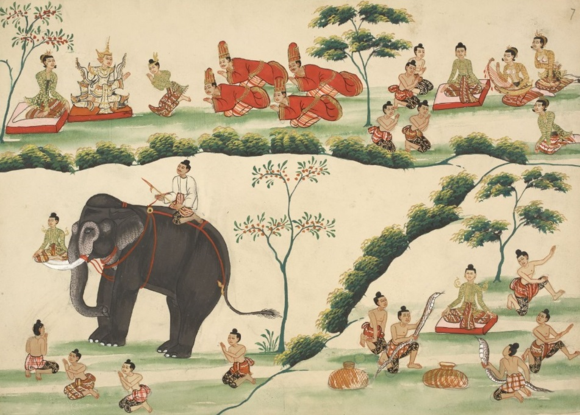 When Prince Temi heard his father’s judgement on and harsh punishment of a criminal he was terrified, and too frightened to become king. He pretended to be deaf and dumb on the advice of a goddess who had been his mother in a former life. His father, the King of Kasikarit, besought his son to speak. In the scene shown above Prime Temi is being tested by a loose elephant and snakes. Then he was tempted with beautiful maidens when he was sixteen years old. He remained silent although he was tested again and again in various ways. When he showed no fear and no interest in anything his father thought his son was unsuitable for the kingship and ordered the charioteer to kill his son. However when Prince Temi explained to the charioteer that he was about to commit a sin, the charioteer did not kill him, and the prince became an ascetic and lived in the forest. His father and mother heard about their son and eventually came and asked him to accept the kingship, but their son still refused to become a king. 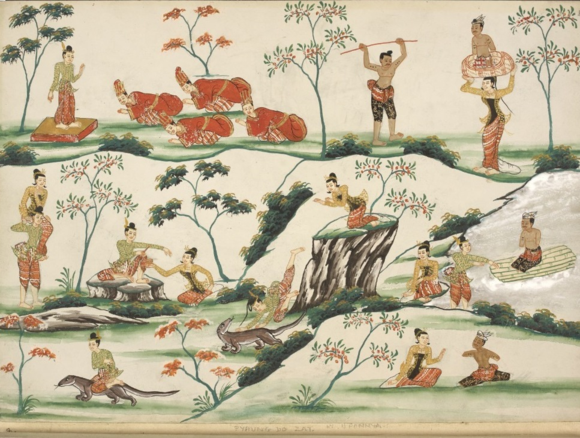 U Ponnya wrote morality tales such as that of Paduma, a banished prince, and his utterly unfaithful wife. Paduma and his six brothers and their wives were exiled when the king was warned by his ministers that the princes might rebel. The younger princes planned to kill and eat their wives when there was no food in the forest. Paduma carried his wife on his shoulder and ran away from his brothers. Then he struck his knee with his sword to get blood for her to drink when she got thirsty. When they reached a river Paduma rescued a robber who had been maimed and sent adrift for theft. While he searched for fruit for them, his wife became infatuated with the limbless criminal, and when Paduma returned she hurled him down a precipice and left him to die. Fortunately Paduma was rescued and brought back to his kingdom by an iguana. He became king when his father, the king died. His former wife carried the limbless man in a basket and arrived at Paduma’s kingdom. Paduma, the king, recognized them but he desired no revenge on them, and simply ordered his ministers to banish them. 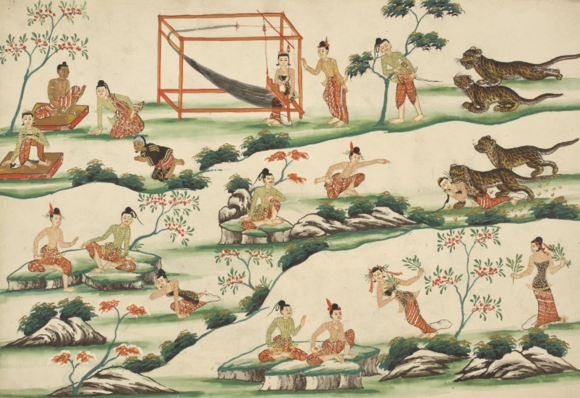 The other main subject of Burmese drama is the sacrificial stories of nats (spirits). Before the reintroduction of Buddhism in 1056 people worshipped various nats, and spirit dances are still performed on spirit feast days. In this scene a country girl, Ma Swe Oo, who was also a weaver, was killed by a tiger sent by the younger Taung-pyone brother (Min Galay) for spurning his advances. After her violent death, she became a spirit and the patroness of weavers. 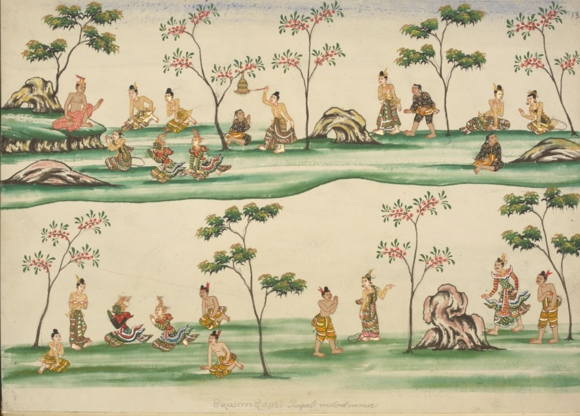 Hlaing Hteik Khaung Tin, the Crown Princess (1833-1875) in the reign of King Mindon, wrote court dramas such as Vijayakārī and Indavaṃsa. She earned her fame through her romantic dramas. In the scene shown above, there is a tree in a magical forest where lovely maidens grow and wait to be plucked. This drama is about Prince Vijayakarī, Sakanituṃ (a princess born from flower bud), and Adideva of Ogre Kingdom. 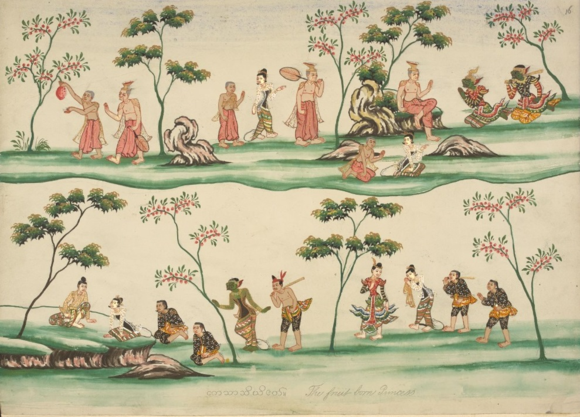 Kethathiri zat (drama) was compiled by Thakin Min Mi, the granddaughter of King Hsinbyushin (1763-1776) of Burma. The scene depicts a tree with a big flower bud, which was created by the king of the gods (deva) through his supernatural power, in the garden of an old hermit. When a beautiful maiden was born from the flower bud, the hermit gave her the name Kethathiri and looked after her as his granddaughter. Then the King of Ogres came and asked for permission from the hermit to adopt her as his daughter and take her to his country.

The court dramatists wrote delightful romances which are marvels of literary art. Only a few of their works survive to the present day but these are still widely read and studied. This beautiful manuscript, Or. 3676,  has recently been fully digitised.

Posted by Annabel Gallop at 4:17 AM