The British Library’s Collection of Chinese Propaganda Posters: An Overview

And so my three months are up and I have completed the project: to compile and research a catalogue of the British Library’s Chinese propaganda posters. So what have I found out? Well, in the collection there are 90 individual items, considerably more than we believed there would be at the outset. The posters date from between 1950 and 1982, with the vast majority having been published in the mid-1960s, just before the Cultural Revolution (1966-1976), largely thanks to a couple of sets of what I have loosely described as ‘public information’ posters, dating from 1965. One set deals with what to do in the event of an enemy air raid, and the other with meteorological and agricultural observations. 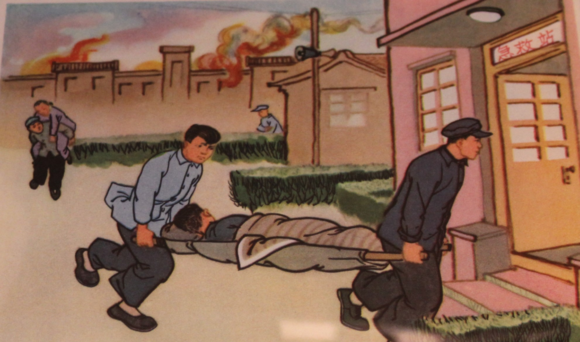 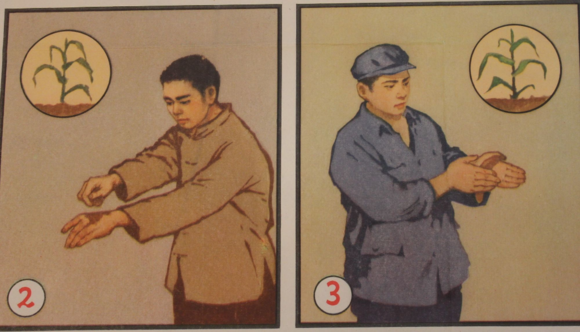 Overall the poster collection covers a range of genres, from new nian hua and revolutionary romanticism – a fusion of socialist realism and guo hua brush and ink painting – to photographic portraits. I have categorised them according to a number of different themes:

•    Posters related to the Mao cult, including colourised and heavily airbrushed photographic portraits of Mao Zedong dating from the late 1960s, and several examples of his calligraphy (and poetry).
•    A series of posters featuring chubby babies and children, dating to the late 1970s and early 1980s, several of which promote the one child policy.
•    Revolutionary nian hua prints, dating from the early years of the People’s Republic, and which I looked at in depth in my last blogpost.
•    A set of posters featuring the ubiquitous and (probably) semi-mythical soldier-hero Lei Feng (雷锋) and which eulogise the People’s Liberation Army (PLA).
•    A fairly rare set of posters featuring satirical caricatures of the ‘Gang of Four’ (si ren bang, 四人邦), the group headed by Mao’s wife, Jiang Qing, and which was blamed for the worse excesses of the Cultural Revolution in the wake of Mao’s death in 1976.
•    The aforementioned sets of public information posters dating from 1965.
•    Documentary and feature film posters - the Library’s collection seems fairly unique in this respect; these are not something I’ve seen in large quantities in other collections.
•    Posters featuring scenes taken from the revolutionary model works (yang ban xi, 样板戏), including ‘The White Haired Girl’ (Bai mao nü, 白毛女), ‘The Legend of the Red Lantern’ (Hong deng ji, 红灯记) and ‘The Red Detachment of Women’ (Hong se niang zi jun, 红色娘子军).

While copyright implications have stymied the original plan to digitise the collection and make it publically accessible online, the catalogue – minus images – will shortly be available to download as a PDF from the new Chinese collection webpages.

Over the last three months I have had an absolutely fantastic time. It’s been a great experience to work at the Library and I was made to feel very welcome. The project has provided me with plenty of research material for the future, and what a privilege it was to get hands-on with the collection!
All that remains is for me to thank Professor Robert Bickers and BICC for funding the project and Sara Chiesura and Emma Goodliffe, curators of the Chinese collection at the British Library for hosting me.

Posted by Annabel Gallop at 9:50 AM