The rediscovery of an unknown Indian artist: Sita Ram's work for the Marquess of Hastings

In 1974 the auction house Sotheby’s in London sold two albums of drawings by an otherwise unknown artist called Sita Ram. These albums were respectively entitled Views by Seeta Ram from Moorsheedabad to Patna. Vol. I and Views by Seeta Ram from Secundra to Agra. Vol. IX. Each album contained 23 large watercolours of topographical views of the scenery and monuments of the relevant part of India. Both were soon dispersed to collectors all over the world. Apart from the clear inference that the albums were part of a much larger set commissioned by a wealthy British traveller, there was no clue to their provenance, patronage or date. 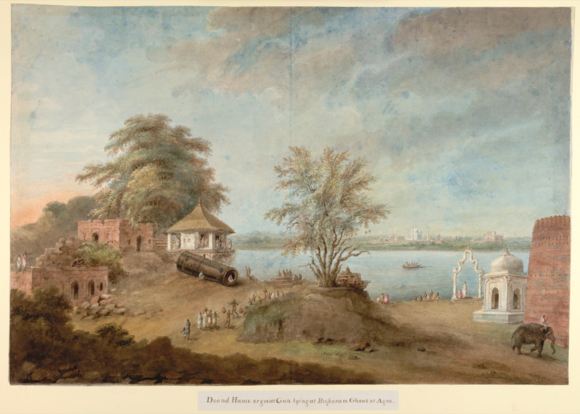 One painting from the dispersed vol. IX, 'the Great Gun of Agra', was acquired for the British Library in 1986 and I subsequently published it without knowing the real provenance (Losty 1989). Other drawings from these albums were acquired by many prominent collectors of Indian paintings, including Ed Binney III , S.C. Welch, Krishna Riboud and Paul Walter. Many have been published over the years in various exhibition catalogues.

These are large watercolours (averaging 40 by 60 cm) by an Indian artist trained in the contemporary Murshidabad school, but no doubt working in Calcutta round about 1810-15. Sita Ram has clearly absorbed considerable influence from the English watercolourists and engravers in aquatints such as William Hodges and Thomas and William Daniell, as well as somewhat later artists in India such as George Chinnery. Despite the influences, this artist is able to compose picturesque and beautiful compositions in his own right as in this case, concentrating rather like Chinnery on a minor antiquity and relegating the Taj Mahal to the distance along the River Jumna where it shimmers through the heat haze. Many of these paintings also promised to be of great interest in the discovery of India’s past before the advent of photography and the Archaeological Survey. In the case of the painting above, for instance, the area was totally destroyed by the blowing up of the cannon in 1833 and the later building of the railway bridge across the Jumna past the north wall of the Agra Fort.

Admirers of later Indian painting could only hope that the missing volumes would one day turn up. This duly happened in 1995, when the British Library was offered and was able to acquire the remaining albums by Sita Ram (numbered II-VIII and X). They formed part of the collection of albums of drawings formed in India by the Marquess of Hastings, the Governor-General of Bengal 1813-23. The ten albums by Sita Ram illustrate Lord and Lady Hastings’ journey from Calcutta to Delhi and back in 1814-15. There were in all 25 albums of drawings in the collection, by Indian, Chinese and British artists. They had been for the last 150 years in the collection of the Marquis of Bute in Scotland, and indeed hitherto unknown and unsuspected. Hastings then turned out to be Sita Ram’s patron and the artist’s paintings of the voyage could be firmly dated 1814-15. This journey had been long known of through the publication in 1858 of Lord Hastings’ journal, edited by his daughter the Marchioness of Bute, who as a child had accompanied her parents on this grand voyage (Hastings 1858) and who had inherited all her father’s papers and albums.

The 10 albums each with 23 drawings form a grand diorama of north India, as if Hastings had set out to surpass the 144 aquatints of the Daniells’ Oriental Scenery. It is 20 years since the Library acquired these albums and finally it has been possible to publish them in a fitting manner with the enthusiastic cooperation of Pramod Kapoor of Roli Books in Delhi (Losty 2015). An introduction deals with the patron Lord Hastings and Sita Ram as an artist, but the meat of the book is the publication of 160 of the drawings taken on the voyage and of an abbreviated version of Hastings’ journal, which sheds so much light on the paintings. The two obviously go hand in hand, though Hastings refers only occasionally to the ‘Bengal draftsman’ who accompanied them.

In order to inspect the British possessions in India and to meet Indian rulers and notables, and in his capacity as Commander-in-Chief to keep a closer eye on the current war with Nepal, Hastings made a journey upcountry from Calcutta to the Punjab and back. The party embarked on 28 June 1814 at Barrackpore in a flotilla of no less than 220 boats. Hastings was accompanied by his wife and small children, by his secretaries and A.D.C.s, and no doubt by their wives and children, by 150 sepoys of the Governor-General’s Bodyguard, and by a battalion from the Bengal Army. They all would have needed boats for their luggage and equipment, for their horses, for their food and stores and floating kitchens. They needed to set off in the adverse conditions at the height of the monsoon, as only then was the water debouching from the Ganges into the Hooghly high enough for the boats to pass over the bar at Suti. 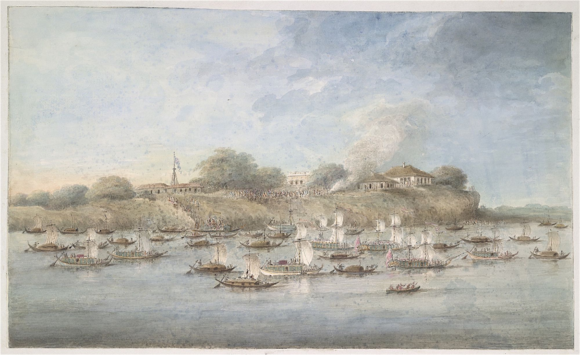 The flotilla conveyed them up the river Hooghly and into the main stream of the Ganges, past Patna, Benares and Allahabad as far as Cawnpore. Hastings provides graphic descriptions of the difficulties encountered on the river of fighting the adverse winds and the current, of the incessant necessity for ‘tracking’, i.e. the boatmen landing and pulling the boats upriver, and of the tedium when they had to wait for changes in the wind to get round promontories. 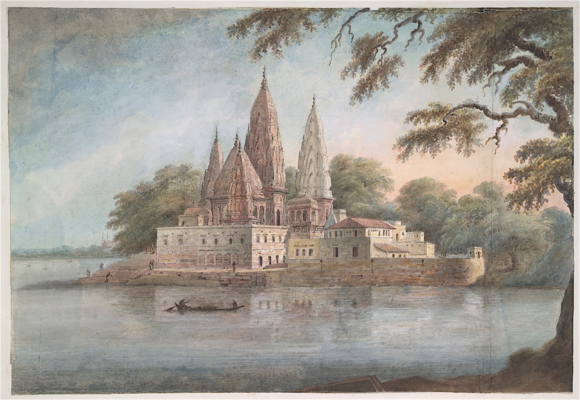 Some of the paintings illustrating the river journey are among the most tranquil and beautiful creations in Indian painting. 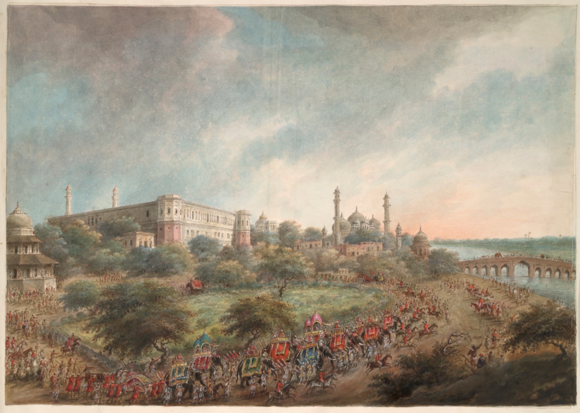 At Cawnpore they disembarked from their boats and travelled overland to Lucknow. One of the principals purposes of the journey was for Hastings to meet the new Nawab Vizier Ghazi al-Din Haidar. Hastings tells us later that no less than 10,000 people were in the party at this time. The principal members of the party travelled by elephant, camel, horseback, palanquin and all the other means of transport employed in early nineteenth century India, whereas everyone else simply had to march. They moved at the rate of about ten miles a day (it took five days to cover the 50 miles between Cawnpore and Lucknow!), starting off before daybreak and reaching their next encampment before it became too hot. By having two complete sets of tents the second set was always available for the principal travellers when they arrived at the next encampment for breakfast. There they rested during the hear of the day, met the local people both British and Indian, and Hastings also could get on with the day-to-day tasks of governing India. 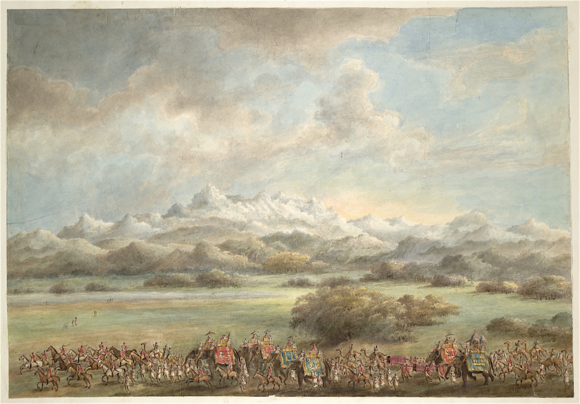 The travellers marching past the mountains at Kashipur. Watercolour by Sita Ram, 1814-15. British Library (Add.Or.4775)

From Lucknow, the party then marched north-westwards parallel to the Himalayas, passing to the north of Delhi up to Haridwar where the Ganges debouches onto the plains. 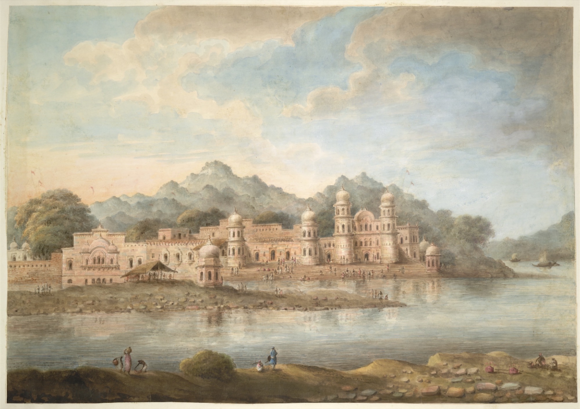 They then turned south into the Punjab and approached Delhi from the west through Haryana. In the event, questions of protocol prevented Hastings from meeting the Mughal emperor Akbar II, or King of Delhi as the British referred to him at this time, although Lady Hastings went to Delhi as a sightseer, taking Sita Ram with her. 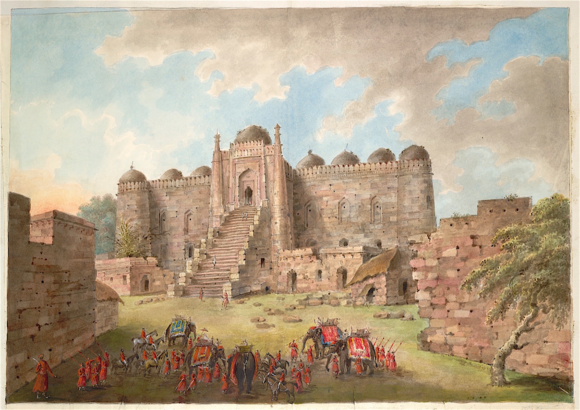 Lord Hastings busied himself inspecting the garrison at Meerut before meeting up with his wife’s party again south of Delhi. The travellers turned south towards Agra, admiring the great Mughal monuments there and at Sikandra and Fatehpur Sikri, then marched to the British military station of Fatehgarh near Farrukhabad on the Ganges. There they passed the hot weather of 1815 waiting for the monsoon rains to swell the river so that they could pass over the bar at Suti and down the Hooghly to Calcutta. Sita Ram must have passed these months finishing off his watercolours and preparing them for pasting into the albums. The Hastings’ children became ill at this time and when the rains had swelled the river but the monsoon gales had abated, they embarked on their boats and sailed rapidly downstream to Calcutta where they arrived on 9 October 1815. The whole journey took seventeen months. Lady Hastings took the children home to England but later returned to be with her husband. 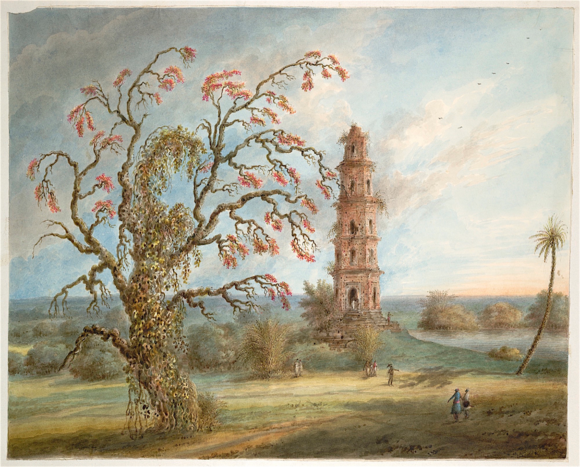 Sita Ram continued to work for Hastings.   Another two albums of drawings also by Sita Ram contain views in Bengal taken on subsequent tours, one during a sporting expedition to northern Bengal in 1817, and the other during a convalescent tour in the Rajmahal Hills in 1820-21. Sita Ram has matured even more as an artist by then and they contain some of his most beautiful works. With Hastings’ departure from India in 1823, however, Sita Ram disappears from the record and no further work is known from his hand.

Posted by Ursula Sims-Williams at 2:15 PM