James Low was one of the first Europeans to visit the Andaman sea coast of Thailand, stretching from Phuket to the Malaysian border, which is nowadays one of the great tourist destinations of the world. Low’s mission took place in his line of duty as an officer of the English East India Company based at Penang. 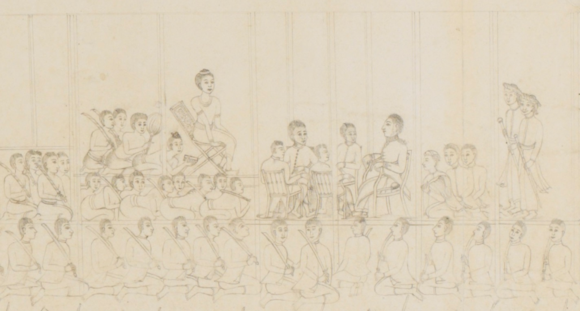 Detail from a drawing depicting the reception of James Low by the son of the Raja of Ligor (Nakhon Si Thammarat) in 1824. Drawing attributed to “Boon Khon”. The use of a Western perspective as in the depiction of the chairs was unusual in Thai art of the early 19th century. British Library, Add. 27370, f.18

Born on 4 April 1791 at Causland in Scotland to Alexander Low and his wife Anne Thompson, Low graduated from Edinburgh College and was then nominated for a cadetship in the East India Company’s Madras Army in 1812. He was accepted and embarked from Portsmouth on the East Indiaman Astell, which reached Madras in July 1812. During the first five years, Low acquired military competencies and language skills. The Company’s policy was that their officers had to be capable of basic communication with the Indian soldiers under their command. In May 1817 Low was appointed Adjudant, and then promoted to the rank of Lieutenant in August of the same year. In January 1819 Low moved to the East India Company’s settlement in Penang and spent the rest of his career in and around the Straits of Malacca. In 1820 he was given command of the Penang Local Corps until the corps was disbanded in 1827.

Since Low had received a mathematical and philosophical education at Edinburgh College, he nurtured an interest in the study of languages. The posting to Penang offered the opportunity to acquire language skills in both Malay and Thai. The knowledge of Thai was particularly important in the light of events on the Malay peninsula, to which the Burmese had sent their last military expedition against Siam, directed at its west coast territories. Subsequently, the British at Penang found themselves in the middle of a conflict between the Siamese Governor, known as the Raja of Ligor (Nakhon Si Thammarat), and the Sultan of Kedah, who had fled to Penang instead of providing the support which had been requested from him by the Raja of Ligor. 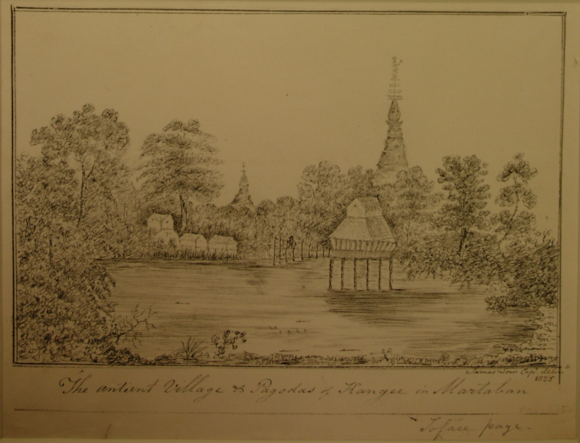 Low’s was the second mission to Siam, following John Crawfurd’s first mission that was mainly concerned with resolving the legal status of Penang. The second mission of 1824 under Low’s command was prompted by the British declaration of war on Burma. Its aim was to enlist the support of the Raja of Ligor, who was in command of most of the Siamese territories on the west coast of the peninsula including Kedah, for the planned British move up the Irrawaddy river. Low described the events of the mission in a report on his Public Mission to His Highness the Rajah of Ligor, and in more detail in his Journal of a Public Mission to the Rajah of Ligor. Low also produced a map of Siam, Cambodia and Laos. After his mission to Ligor, he was posted to Tenasserim where he produced more maps and landscape drawings. In 1826, Low was promoted to Captain and was sent on other missions to the Malay state of Perak. Shortly after, he was appointed Superintendent of Lands in Province Wellesley in Penang, a post he held until 1840 when he was made Assistant Resident of Singapore. He finally retired in 1845 but returned to Edinburgh only in 1850, where he died just two years later.

Although Low's main responsibility as an officer of the East India Company was to settle disputes with local chiefs in the interests of the British – a task he did not always succeed in fulfilling – he was also a pioneer in the study of Thai language, literature and art by Westerners. The lack of textbooks inspired him to produce a Grammar of the Thai or Siamese language (1828), and he published a collection of works On the government, the literature, and the mythology of the Siamese (1831-36) as well as articles on Thai Buddhist art, Buddhist law, local histories and ethnic minorities of the Malay peninsula. He also studied inscriptions and translated parts of Thai Buddhist scriptures, and the Malay historical text from Kedah, Merong Mahawangsa. Low’s ability to observe and then describe in detail a variety of aspects of Thai art and culture helped to make his mission journal an interesting source for the study of everyday life and cultural practices in 19th century Siam. 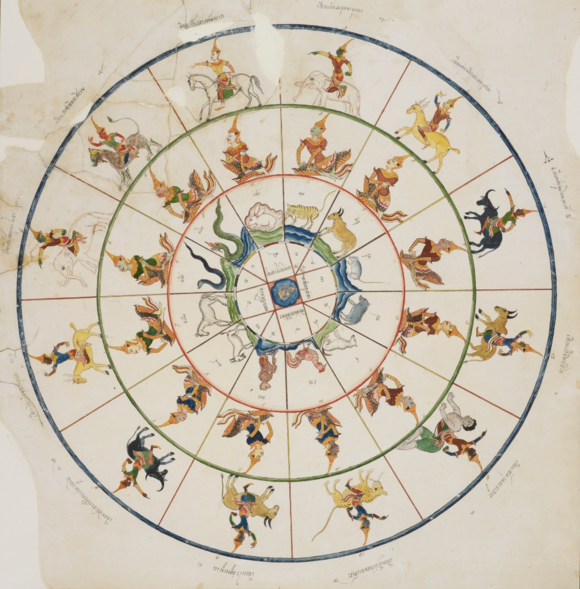 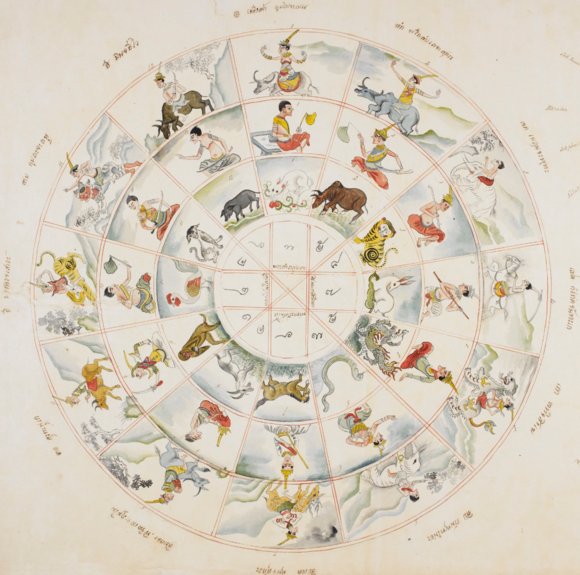 Another version of the Thai zodiac shown above this one, with added background landscapes in Chinese watercolour technique. Probably by the artist “Boon Khon”. British Library, Add. 27370, f.15

Low clearly had a strong interest in Thai art, and amassed an impressive collection of fine paintings and drawings from southern Thailand. These included rare copies from a Thai Buddhist cosmology associated with a Thai text, Traiphum, which is thought to date back to the 14th century. Other subjects of these artworks are the Ten Birth Tales of the Buddha, illustrations from Thai divination manuals and zodiacs, as well as depictions of Low’s reception in Ligor, genre scenes, and of religious artefacts. Several of the drawings contain a note in English in Low’s handwriting that they are copies by a Siamese artist from original manuscripts, and to one pencil sketch of three Chinese gods Low had added in ink the note “Boon Khon delint” (copied by Boon Khon). On another pencil drawing of a vase, the artist is named as Sayid Nuh, his title indicating a person of Arabic origin, a descendant of the Prophet. 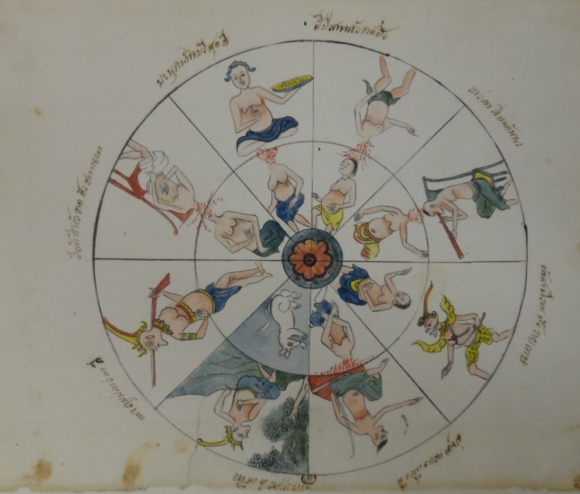 Impression of a Rajamukha wheel, which is used in Thai and Malay divination. Attributed to “Boon Khon”. British Library, Or.14179

Unfortunately, not all of the artworks bear the name of an artist, but it is believed that most of these are copies from Thai manuscripts by the artist “Boon Khon”, who Low said was “a Siamese”. However, the fact that chairs, musical instruments and round objects are shown in Western perspective – something unusual in Thai art of the first half of the 19th century – and that certain features of plants, landscapes, architectural ornaments and faces of the figures appear rather Chinese in style than Thai, suggest that the artist mentioned as “Boon Khon” was probably a Chinese painter who may have acquired some drawing skills from Low himself. A comparison of pencil drawings by Low, now held at the Royal Asiatic Society in London, and works attributed to “Boon Khon” show some striking similarities, especially when it comes to details like plant features. Some of the coloured drawings showing the same motif were made in different styles and techniques, suggesting that artists copied from each other. There may actually have been a third artist - one who was skilled in Thai painting techniques - who worked for Low or who trained “Boon Khon” to copy paintings from Thai manuscripts.

Part of a painting of Buddha’s Last Ten Birth Tales, probably by the artist “Boon Khon”, depicts scenes from the Candakumara Jataka and Bhuridatta Jataka. The faces and breasts of the Naga princesses at the bottom, but also the gable and roof of the building at the top, are untypical for Thai manuscript painting. Some trees and tufts of grass have similarities with plants in pencil drawings made by Low. The lotus plants at the bottom are similar to lotuses drawn by “Boon Khon” as part of a Buddha footprint, reprinted in Low’s article “On Buddha and the Prabat” (1835). British Library, Add. 27370, f.12

Part of Low’s collection of Thai drawings and paintings was acquired by the British Museum in 1866 from Alan White Esquire, and is now held in the British Library. Most of the artworks have been digitised and are available on the Library’s Digitised Manuscripts viewer (Add MS 27370). Another part of Low’s art collection, including several of his own drawings, is held in the Royal Asiatic Society in London. Although not much research has been done on Low’s art collection, it is a popular source of inspiration for Thai designers. 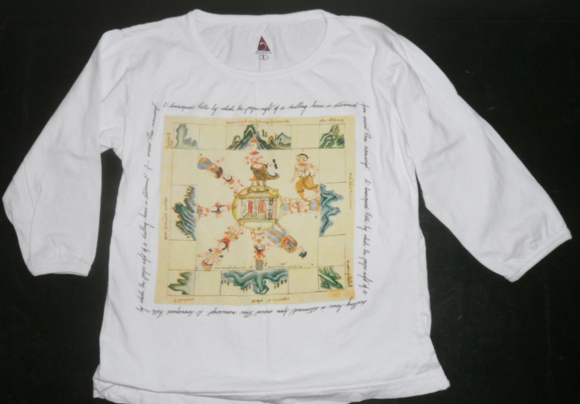 My thanks to Nancy Charley for providing photographs of artworks in the Low collection at the Royal Asiatic Society, and to Annabel Gallop and Farouk Yahya for their advice on Malay manuscript painting.

Posted by Annabel Gallop at 3:39 PM