And Did Those Feet In Ancient Times…?

Recent ultraviolet photography of a 17th century map of the Japanese port city of Nagasaki has revealed the unsuspected paw prints of a cat. 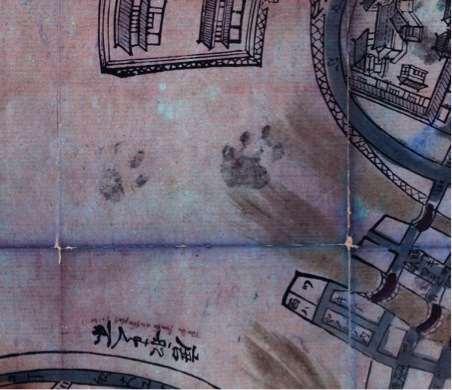 The untitled map – traditionally referred to as Nagasaki ezu 長崎絵図 (‘Illustrated Map of Nagasaki’, BL shelfmark Or.75.g.25) – is part of the collection acquired by Sir Hans Sloane, ‘father’ of the British Museum, from the family of the German physician and naturalist Engelbert Kaempfer (1651-1716). Kaempfer was the author of The History of Japan, published posthumously in 1727, one of the most influential early works introducing Japan to a Western audience. Employed by the Dutch East India Company, Kaempfer stayed in Japan from 1690-1692. He served as medical officer in the Dutch trading factory on Deshima, the artificial island in Nagasaki Bay constructed by the Japanese authorities to house the small number of Western merchants permitted to trade. During his time in Japan Kaempfer amassed a large number of books, manuscripts, paintings, botanical drawings and artefacts which he used as sources for his writings on his return to Europe, However his work on Japan remained unpublished at his death in 1716 and between 1723 and 1725 the draft manuscript along with his collections were acquired by Sloane. It was Sloane who arranged for its translation into English and publication. Of the sixty items listed as being bought by Sloane forty-five have so far been identified. They are chiefly maps, dictionaries, travel guides, chronologies, directories and popular literature – all typical of the printed material that would have been readily available at the time. Although the individual items were not remarkable when first published, this small collection is now one of the earliest, if not the earliest to survive in Europe.

The Nagasaki ezu was printed using woodblocks and then hand-coloured. It is undated but shows bridges over the River Nakashima which were constructed before 1681. It was clearly already out of date by the time Kaempfer acquired it because he made amendments -such as adding the Chinese merchants’ settlement (Tōjin yashiki 唐人屋敷) built in 1689 - when he copied the map in his manuscript. A version of this appears in The History of Japan as ‘Urbs Nangasaki’. The Nagasaki ezu shows in detail the city and harbour with the fan-shaped Deshima island near the centre and is decorated with depictions of Dutch and Chinese ships and of “exotic” foreigners including a Dutch man and woman. 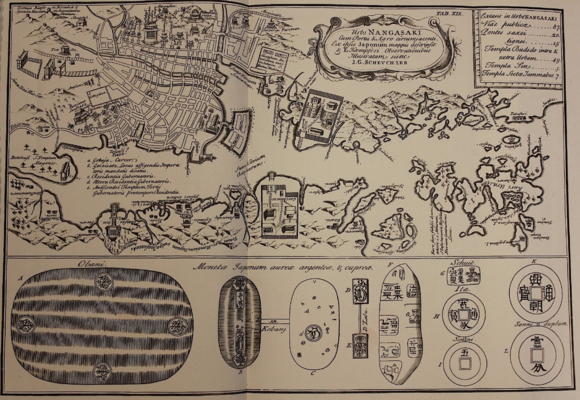 ‘Urbs Nangasaki’ in The History of Japan was based on Kaempfer’s Nagasaki ezu – without the paw prints! (British Library 150.k.9-10)

Colour composite UV photography revealed a pair of feline paw prints just below Deshima island, near where the river enters the harbour. Sadly, the identity of the mystery moggy will never be known nor when or under what circumstances it sauntered across the map. No doubt there were cats on Deshima - as well as dogs, cattle, pigs, goats, chickens, parrots, monkeys and even a porcupine and a cassowary which all appear in paintings of the Dutch factory. Kaempfer certainly wrote about Japanese cats in The History of Japan, “They have a particular beautiful kind of cats [sic] which is a domestick animal with them, as with us. They are of a whitish colour, with large yellow and black spots, and a very short tail, as if it has been purposely cut off. They don’t care for mousing, but love mightily to be carried out, and carress’d, chiefly by women” (The History of Japan. Book I Chapter X) 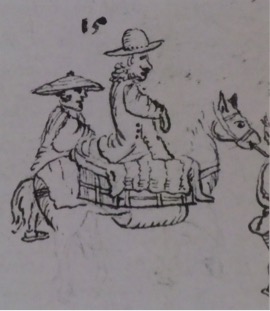 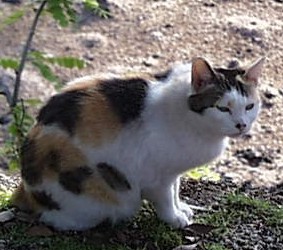 So it is appealing to imagine it was Kaempfer’s cat that stepped on the map, trying to distract its master from his studies – in a way familiar to any cat owner.

Or perhaps Sir Hans Sloane had a cat which ventured into his cabinet of curiosities when the map was lying open.

A third possibility, albeit more worrying from a ‘collection security’ point of view, is that the paw prints were left by one of succession of cats which patrolled the British Museum keeping the mice in check (more on this at ʻBlack Jack, Mike and the British Museumʼ). The most famous of these was Mike who lived at the Museum for twenty years and whose death in 1929 was marked by a memorial poem and an obituary in the Evening Standard!

Hamish Todd, Head of East Asian Collections, with thanks to Christina Duffy, Conservation

Posted by Ursula Sims-Williams at 12:07 AM