Today's guest blog is by Gus Casely-Hayford, a historian and adviser to the exhibition West Africa: Word, Symbol, Song, which continues at the British Library until 16 February.

Time and again, reporting from West Africa reinforces the same few time-worn stereotypes: conflict, corruption, underdevelopment, the spread of the latest epidemic. The British Library’s West Africa: Word, Symbol, Song exhibition (16 October 2015-16 February 2016) was conceived to bring to an audience in Britain histories that challenge these pervasive stereotypes, and confront the many falsehoods about West Africa and its heritage. Behind the headlines, much of the everyday reality for people across West Africa is about resilience, creativity and communication. The seventeen countries of the region are rich in culture and history. This more nuanced picture is what a focus on tragic and terrible headlines risks obscuring. Here are a handful of the most common myths that the British Library’s West Africa: Word, Symbol, Song exhibition confronts and then robustly takes apart.

Myth 1. West Africa lacks a pre-colonial tradition of writing
West Africa is one of the world’s most linguistically diverse regions, with more than 1,000 languages spoken. This is a written culture that dates back more than a thousand years, with ancient manuscript libraries stretching from Mauritania, across Mali, into Nigeria and beyond. The continuing vitality of this culture was made obvious through the great efforts that ordinary Malians made to save tens of thousands of manuscripts when Timbuktu fell to Al Qaeda-affiliated extremists in 2012. Although as many as 4,000 manuscripts were destroyed, thousands more were smuggled to safety by ordinary people determined to safeguard their heritage. 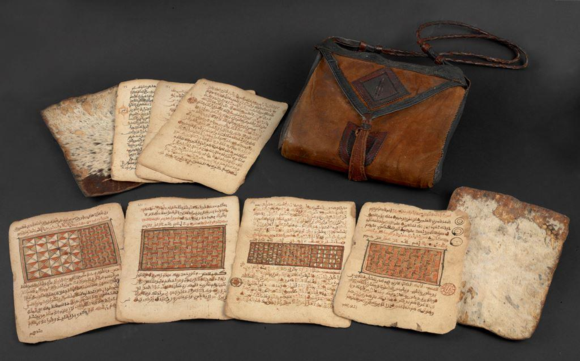 Qur’an typical of the artistic tradition of northern Nigeria/southern Niger. The manuscript is late 18th/19th century and is divided into four by the large illuminations shown here. It is loose leaf and kept in a leather bag, as was usual for West African manuscripts. British Library, Or. 16751

Myth 2. West Africa has no history
Hegel famously wrote that Africa was somehow different to other continents, that it was somehow ‘shut up’ in a ‘dark mantle’ without formal history or culture. Yet, over the past millennium, West Africans have forged many kinds of societies: from cities to villages, carving out a living in semi-desert and forest, building kingdoms, empires and city states. The ancient city of Djenné-Djeno in present-day Mali dates back at least 2,000 years. The great medieval empires of the Sahel, Ghana, Mali and Songhai, were succeeded in turn by later kingdoms and empires, for example the 18th and 19th century Asante empire in what is now Ghana. This 1819 illustration from Thomas Bowdich’s Mission from Cape Coast Castle to Ashantee shows Adum Street, close to the royal palace in Kumasi. The open porches fronting onto the street were offices where the kingdom’s officials conducted their business and received members of the public. 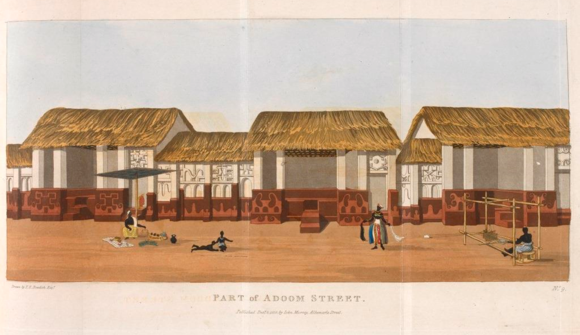 Myth 3. West Africa is and always has been ‘war-torn’
As with anywhere in the world, this region has had its share of conflict and civil strife, but equally there is a rich legacy of trade, prosperity and intellectual and cultural exchange. There were trade routes across the Sahara from a very early date, and Islam reached West Africa by this route in the 8th and 9th centuries. This exquisite brass forowa is a wheeled box for carrying valuable materials such as cowrie shells, gold dust or shea butter. It is richly decorated with symbolic designs including a sankofa bird and a spider, most probably a representation of the trickster god Ananse, and shows how cultural exchange flourished alongside trade. 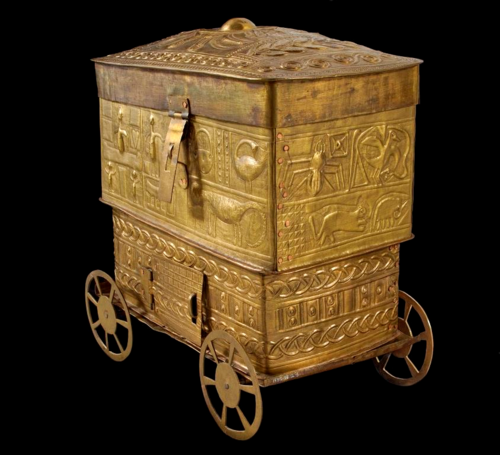 Myth 4. Drumming is the sound of West Africa
Traditional music encompasses a huge range of different sounds, which are open to change and development and in many cases are woven together with complex verbal literatures: poetry, story and narrative. The region is home to a vast array of genres, including gospel, highlife, rap, mbalax, gumbé, jùjú music and Afrobeat, all drawing on local traditions and fusing them with a range of musical traditions from around the world. In the 1970s and ‘80s Afrobeat pioneer Fela Kuti created music that combined social comment and protest with an electrifying sound that resonated globally, and which has influenced several generations of musicians and activists. 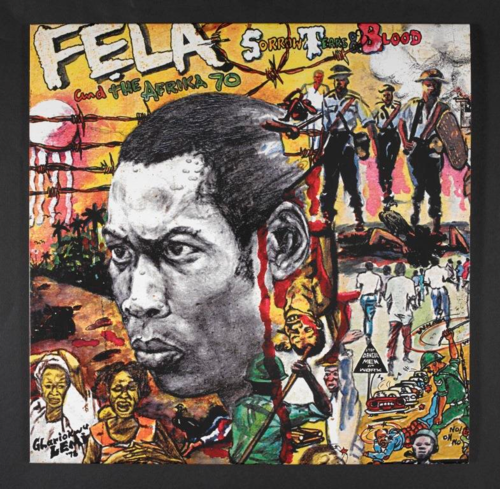 Myth 5. West Africa has not demonstrated true innovation
Creativity is central to West African culture, whether in music, visual arts or literature. In the 1950s and ‘60s, as nations in the region were breaking free from colonialism, West African writers like Chinua Achebe and Amos Tutuola developed exciting literary forms that combined the storytelling traditions of the Igbo and Yoruba peoples with the English language and achieved huge international success. The modern art shown in West Africa: Word, Symbol, Song also demonstrates this determination constantly to innovate. In ‘Feminine Power Series 2’ artists Nike Davies-Okundaye and Tola Wewe take a tradition of symbols used in textile production known as adire and reinvent them in a modern artistic context.

Myth 6. For much of its history, West Africa has been remote from the rest of the world
The great empires of the Middle Ages covered a huge amount of territory and there was much travelling and communication within the region, whether in the form of trade, diplomacy or imperial business. West Africa has been in close touch with the Islamic world since it first emerged and has played an important role in European history, particularly through the eras of enslavement and colonialism. The forced labour of West Africans went on to underpin the prosperity of Europe and the Americas. The influence of West Africa’s culture and music has been felt all round the world, whether in carnival – which brought influences from West Africa and Europe to the Americas and eventually beyond (such as to the UK) – or through musical instruments. Arguably the akonting, an instrument of the Jola people in The Gambia, is a forerunner of the modern banjo, the sound of which can be heard in genres ranging from jazz to bluegrass. 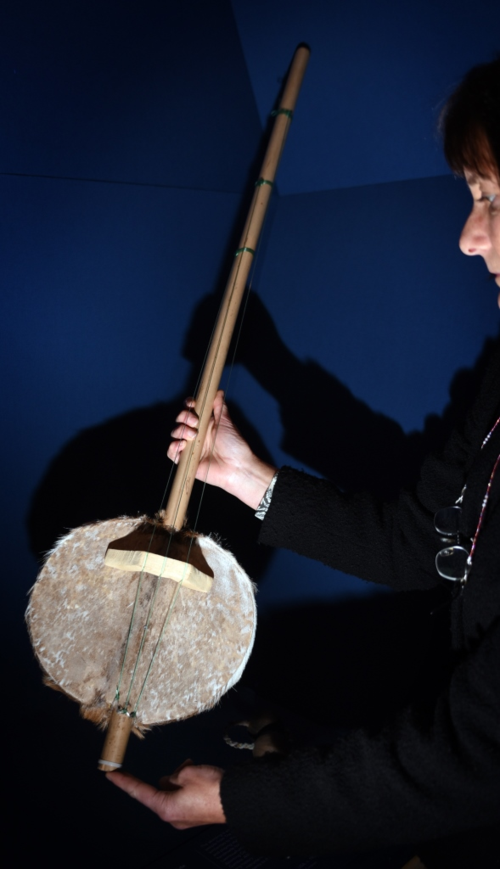 Myth 7. West Africans were passive in the face of enslavement and colonialism
Enslavement and colonialism were always met with resistance in a variety of forms. In 18th and early 19th century England, a number of books were published by West Africans freed from enslavement, asserting the humanity of Black people and calling for an end to the Atlantic slave trade. Most famous among these was Olaudah Equiano, whose Interesting Narrative of his experiences became a bestseller. Even earlier, the letters of Ayuba Suleiman Diallo in the 1730s show him agitating for his eventual release, using all the enterprise and charm at his disposal to secure his freedom. 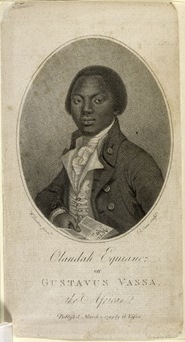 Oloudah Equiano, The interesting narrative of the life of O. Equiano, or G. Vassa, the African ... written by himself (London, 1789). British Library, 615.d.8

Myth 8. Women are marginal to the region’s intellectual and literary culture
In the 19th and 20th centuries, women played a prominent role both in the independence movements in West Africa and in the great generation of post-independence writers. Activists, educationalists and writers like Adelaide Casely-Hayford, Mabel Dove and Funmilayo Ransome-Kuti have left a rich legacy of books, articles and pamphlets, in many cases arguing trenchantly both for national liberation and female emancipation. More recently, the latest wave of West African music and literary stars has included women such as Oumou Sangaré, Angelique Kidjo, Taiye Selasi, Aminatta Forna and, most spectacularly, Chimamanda Ngozi Adichie. 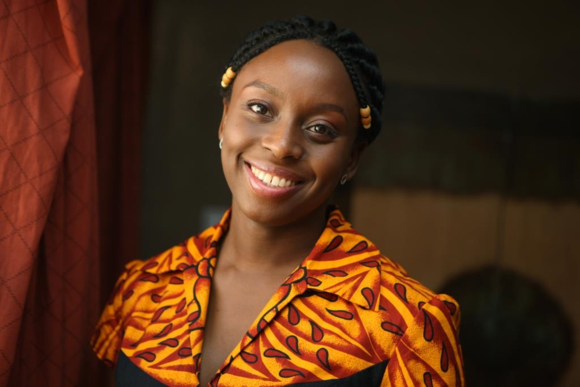 Myth 9. West Africa’s influence on cultures beyond the continent is limited
The region’s music forms the root of all popular music, with musical styles and rhythms diffused across several continents through the forced migration of millions of West Africans during the course of the Atlantic slave trade. Spirituals and the blues developed out of the experience of enslaved peoples and went on to have a formative influence on later styles such as rock and roll, R&B and hip-hop. Carnival originated in West Africa and, via the Caribbean, travelled to destinations as diverse as Rio and Notting Hill. 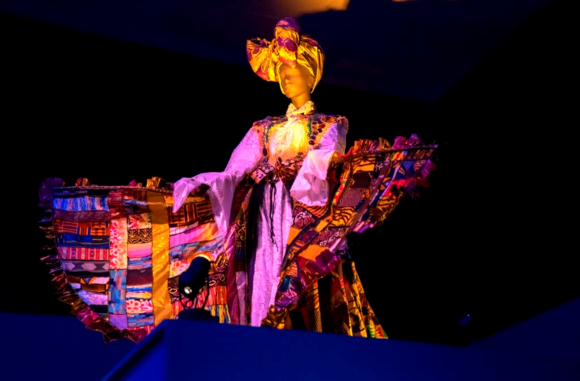 Carnival costume designed by Ray Mahabir (Sunshine Arts) in 2015 for the ‘West Africa: Word, Symbol, Song’ exhibition. It is based on the tradition of Bele or Bel Air, a drum dance and song closely associated with Caribbean history, struggle, freedom and celebration. Photo © Tony Antoniou

Posted by Annabel Gallop at 9:12 AM