The highlights among the Shan manuscripts held at the British Library are some Buddhist folding books whose beauty will catch anyone’s eye. At first sight, each of them actually looks like a bar of pure gold – and this was certainly the intention of the craftsmen who produced these books. However, the idea of pure gold rather refers in a figurative sense to the purity and the moral value of the sacred texts contained in these manuscripts. To followers of Theravada Buddhism, Buddha’s teachings (Dhamma) are worth much more than just gold.

Buddha’s Dhamma is not just regarded as a doctrine: it is the wisdom, moral philosophy, and truth as propounded by Gautama Buddha, the most recent Buddha, in his discourses; Buddha’s interpretation of the order of the world or immanent, eternal, uncreated law of the universe. The Buddha is the discoverer - by means of Enlightenment - of this universal law, in which rational and ethical elements are combined. 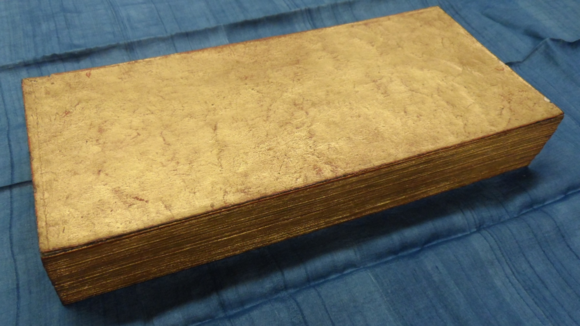 Although the Tipitaka, the actual collection of primary texts in Pali language, forms the doctrinal foundation of Theravada Buddhism, the complete body of classical Theravada texts consists of the Tipitaka together with extra-canonical texts (commentaries, chronicles, sub-commentaries etc.) However, complete collections of the Tipitaka in manuscript form are very rare, and extra-canonical texts were often added only locally. Usually, Buddhist kings requested and commissioned the compilation of as complete as possible Tipitaka collections in order to donate them to newly established temples, or to give them as gifts to Buddhist communities even outside their kingdom.
A common practice in Shan Buddhist culture was that selected texts, short extracts or translations from the Tipitaka were combined in one folding book (pap tup) for the purpose of teaching, giving sermons or chanting. Such folding books could be commissioned by individuals or families as offerings to Buddhist temples, and often they were commemorative volumes in order to make merit on behalf of a deceased family member. For aesthetic reasons and to add value and prestige to these manuscripts, their covers could be embellished in various ways. Covers made from several layers of thick paper could be lacquered and gilded, with added lacquer high relief ornaments and coloured mirror-glass inlay. In rare cases of very prestigious royal manuscripts, jewels could be inlaid in relief-moulded and gilt lacquer. Ornaments frequently used for the decoration of such covers were flowers, plants and foliage, as well as flame-like and hourglass-like designs. Commemorative gilt folding books are known in Shan language as lik ho, i.e. recitation texts or the texts composed in a typical form of Shan poetry for reading out loud to members of audience at ceremonies.

Embossed gold covers studded with multi-coloured pieces of mirror glass and lavish floral decoration in high relief protect this paper folding book, which probably is a copy of an older manuscript, made in a Shan community in in the area of "Muang Lakon Pa Kham" in Northern Thailand. It contains a sermon on aspects of the Abhidhamma and meditation in Shan language, with some sections in Pali. This manuscript was bequeathed to the British Library from Doris Duke’s Southeast Asian Art Collection. 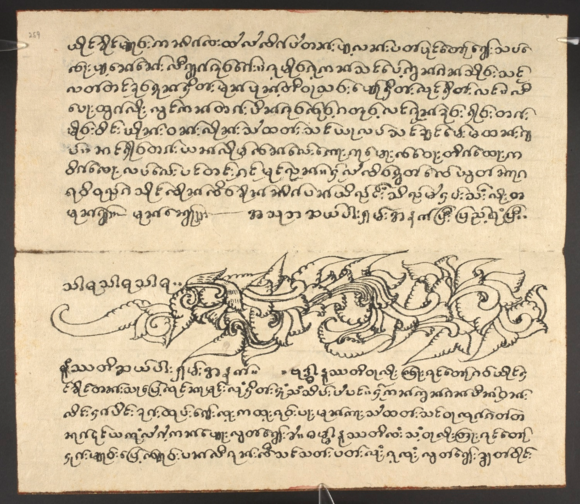 Decorative ornaments drawn in the same black ink as with which the Shan text is written. British Library, Or.16079, f.259

Small decorative elements drawn in ink are sometimes inserted to separate sections of text. Usually this is just a small floral or geometric shape, but in rare cases such decorative illustrations can take up to a quarter of a folio. The illustration above resembles flowery ornaments which can also be found carved on wooden elements of Shan and Northern Thai temples.

The folding book above with embossed gold covers with red, green, blue and silver coloured mirror glass inlay contains a text on recollections of the Buddha, explaining mindfulness with the Buddha’s virtues as objects. This is the first of ten kinds of recollection (anussati), which help to give faith and encouragement to practising Buddhists before taking up the more arduous task of vipassana meditation. 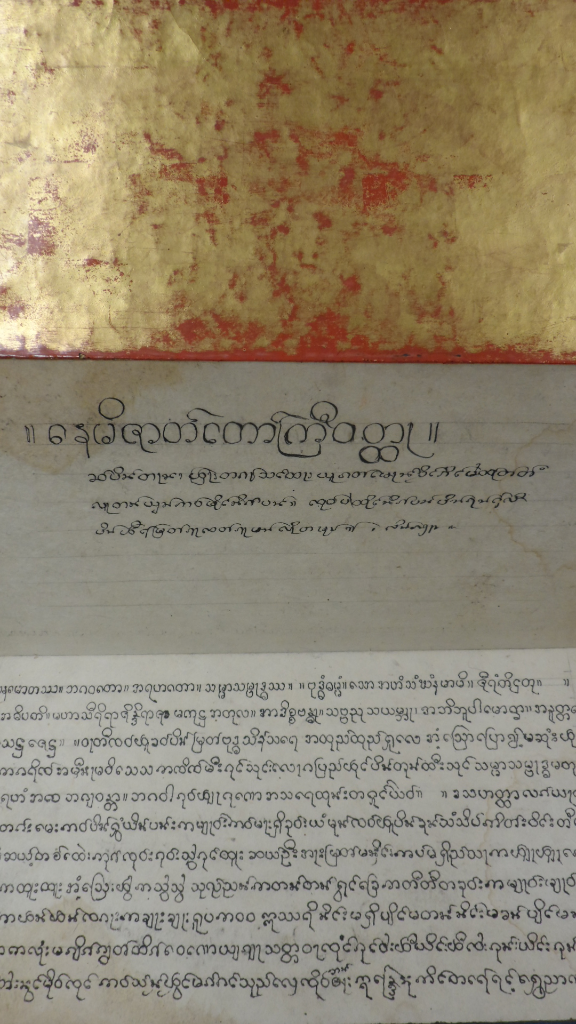 A folding book containing the Nemi Jataka, one of the Last Ten Birth Tales of the Buddha, has red lacquered covers with added gold leaf which has worn off due to frequent handling. This less elaborate technique of cover decoration is certainly the most recurring method used for making lik ho. The front cover is followed by the first folio, which bears the title and the first section of the text. However, when folded up, a large book like the one shown above with 185 folds has the shape of an impressive huge gold bar.

The Anagatavamsa is an important extra-canonical text on the coming Buddha, Buddha Metteyya, which is said to date back to the 12th-13th centuries. To create a bar-like shape of a book, the paper which is relatively tough must be folded up very carefully in an absolutely even manner. The book must then be pressed evenly before the lacquer and eventually the gold and multi-coloured mirror glass inlay decorations can be added. The creation of such a stunning piece of art required great care and much time. Folding books like the one shown above, weighing over 2 kg, are the pride of every collection of Shan Buddhist manuscripts.

Posted by Annabel Gallop at 5:12 AM