Our followers and readers will be delighted to learn that over 760 Hebrew manuscripts have now been uploaded to the British Library’s Digitised Manuscripts. Generously funded by The Polonsky Foundation, the Hebrew Manuscripts Digitisation Project aims at digitising and providing free on-line access to well over 1250 Hebrew handwritten books from the Library’s collection. The project, which began in 2013 is due for completion in June 2016, when the full complement of manuscripts will be available to a global audience. 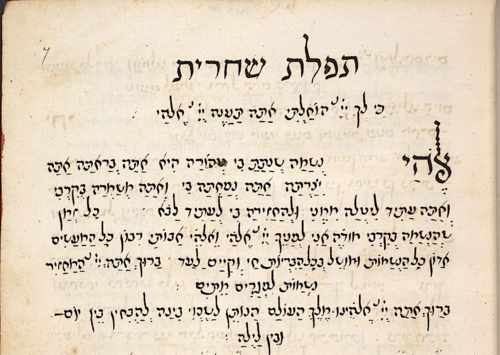 Festival prayer book,  Mahzor, according to the rite of Provence. Opening of the morning prayer (Shaharit). Sephardic (Provencal) vocalised square and semi-cursive script of the 17th century. (Or. 5466, f. 7r)

The host of digitized surrogates released to-date, represents the vast geographical expanse of Hebrew manuscript production, and offers many interesting examples of handwriting styles. Hebrew and other Jewish languages such as Judeo-Arabic, Judeo-Italian, Judeo-Spanish, Yiddish and others, use an alphabet consisting of 22 consonantal letters, 5 of which are shaped differently when used at the end of words. These are known as otiyot sofiyot, literally, ‘final letters’. The Hebrew alphabet which lacks case letters and is written from right left, evolved from the Phoenician alphabet. Its ancient form (c. 10th to 6th century BCE)  was known as the Paleo-Hebrew alphabet or script.  Around the 6th century BCE, it was replaced by a square form of lettering known as ‘Ashuri’ (a stylized form of Aramaic script) that had allegedly originated in Assyria and has survived to this day. The vowels system (nikud in Hebrew) was developed between the 8th and 10th centuries CE in Tiberias (city located on the western shore of the Sea of  Galilee in the Holy Land), by scholars known as the Masoretes and has been used since then. Initially devised to facilitate the correct pronunciation and transmission of the Masoretic Bible, the Tiberian vocalization system was subsequently extended to other Hebrew texts and writings.

The main modes of Hebrew styles of script distinguishable in manuscripts are: square, semi-cursive and cursive. The semi-cursive mode is also known as rabbinic, a misleading term coined by Christian scholars in the 16th century. The principal difference between the three modes lies essentially in the number of strokes required to form the shape of a single letter. The amount of strokes needed to create square letters is higher than that required for semi-cursive characters, decreasing virtually to a single stroke when cursive letters are executed. The speed of writing can also very often determine how many strokes or serifs are needed to create a particular style of script.

Developed in the Orient, most probably before the 10th century CE, square lettering has been formally used for copying the text of the Hebrew Bible, for liturgical works, as well as for Torah scrolls, mezuzot (singular mezuzah - parchment scroll containing Deuteronomy 6: 4-9 & 11: 13-21, placed in a case and affixed to a door post) and tefilin (phylacteries). 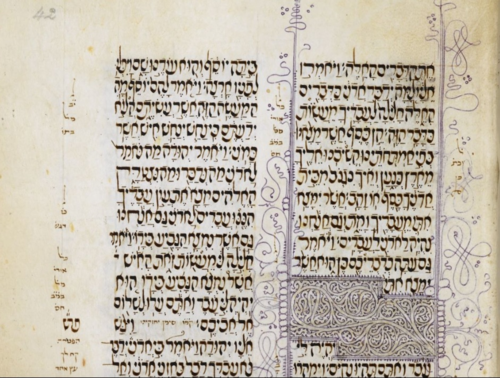 The three major modes of Hebrew script were used in most geo-cultural zones associated with medieval Hebrew book production, namely Ashkenazic (Franco-German lands), Byzantine, Italian, Oriental, and Sephardic (Iberian peninsula). Each zone had its own characteristic types and sub-types of scripts that were strongly influenced by trends prevalent in the host environment. For example, Jewish scribal practices that developed in Oriental and Sephardic territories under Muslim rule (i.e. Egypt, Iran, Iraq, Palestine, Syria, Yemen, as well as Spain from 711 to 1491 CE, Provence), show great affinity with Arabic calligraphy. Likewise, types of Hebrew script that crystalized in the Ashkenazic geo-cultural entity where Christianity was the dominant religion (England, France, Germany, Italy, post-1492 Spain) display similarities with archetypes of Latin script that were prevalent in those areas. A very good example of how Gothic handwriting affected the Hebrew square script is found in this codex made in Germany: 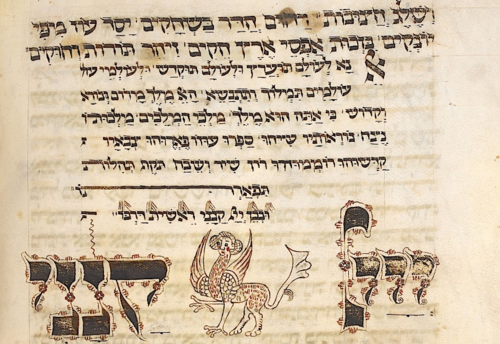 The influence of early Arabic cursive writing is clearly noticeable in this 14th century hand-copied book in which the text was penned in a Sephardic current cursive script. The shapes of the Hebrew letters, the order and direction of the strokes, and the general layout of the calligraphic text bear remarkable similarities with Arabic script. Half down the page, a word was written diagonally. This scribal practice intended to keep the left margins aligned, was most probably borrowed from Muslim copyists, and became a fashionable decorative device particularly in Hebrew manuscripts copied in the Yemen. 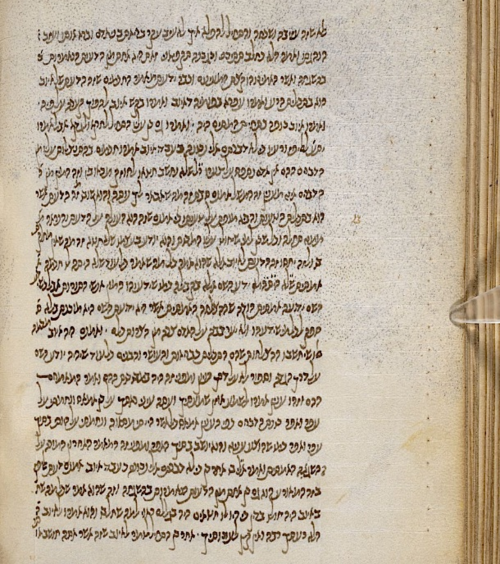 Local trends determined also the type of writing instruments medieval Jewish scribes adopted for plying their trade. Thus, the quill was the popular implement for copying books in Christian territories, while in Muslim lands the reed was the scribes’ preferred tool. The former tended to produce tapered serifs, the latter more homogenous strokes.

The Persian and Yemenite square and semi-cursive sub-types are exemplified in two 15th century biblical manuscripts, as seen in the images below. It is important to mention that the semi-cursive and cursive modes failed to properly develop in medieval Yemen. 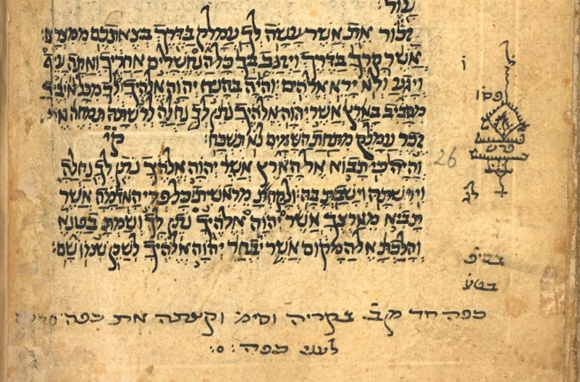 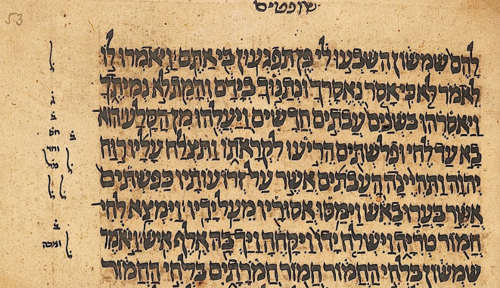 The Italian Hebrew writing, like its Latin counterpart, appears to have preserved the Caroline style (a Latin calligraphic script used in Europe in the early Middle Ages and during the Renaissance). The rounded shape of the Italian Latin scripts is equally noticeable in the Hebrew scripts from that area, particularly in the semi-cursive style of writing. Our first example comes from a sidur (daily prayer book) written by the well-known scribe, scholar and geographer, Abraham ben Mordechai Farissol (1451-1526). He penned the text in a fine square hand. The letters are vocalised and slightly tilted. Note the flourishes shaped as question marks which were added after the Divine name represented by two ‘yod’ letters. 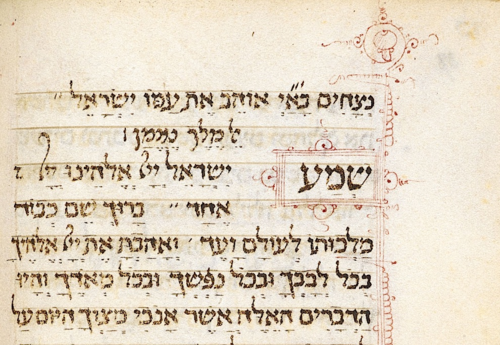 The second example is taken from an autograph manuscript written by the Italian rabbi Mordechai ben Judah Dato (1527-1585), and shows Italian Hebrew cursive script at its best. The rotundity of the characters is particularly evident here. 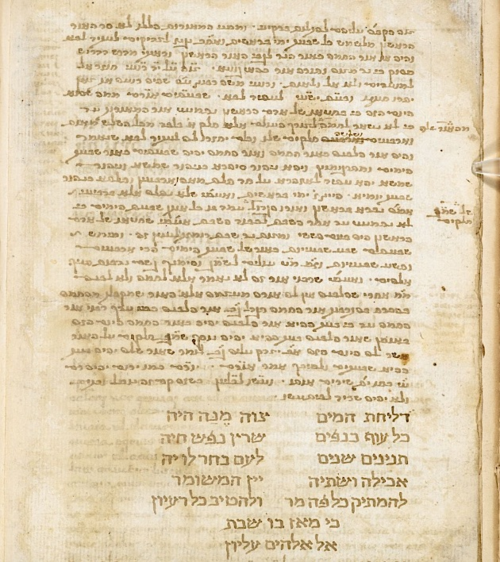 Our next blog will cover further significant items from the Library’s Hebrew manuscript collection which have been digitised since 2013.