Kamma is a Pali word and it covers all kinds of intentional actions, whether mental (mano kamma), verbal (vaci kamma) or physical (kaya kamma). The Buddhist doctrine “Paticcasamuppada” is demonstrative of the process of kamma. It tells us that we all are responsible for our actions, and that most of our present conditions are the result of our actions in the past, and that present actions will determine our future condition. Every action produces an effect, and the effects of our actions come back to us. Our good kamma will come back to us as blessings and lead to a good next life, while bad kamma will lead to lower forms of rebirth. A person can be born again as a different person or animal or any kind of living being after death depending on his or her kamma. Each birth is based on the actions or kamma accumulated in previous lives. Therefore people seek to gain merit by doing deeds in order to improve their kamma. Three types of kamma can be defined: meritorious acts (kusala kamma) such as generosity, morality and meditation, which will help to attain Nirvana, the path of liberation; demeritorious acts (akusala kamma), such as greed, hatred and delusion, which cause rebirth in hell; and neutral acts (kusala-akusala kamma) which are devoid of ethical substance. Rebirth takes place within the three realms (lokas) of the universe - Arupaloka, Rupaloka and Kamaloka - depending upon a being’s kamma. This blog will elucidate the planes of Buddhist rebirth, with illustrations from two Burmese cosmological manuscripts held in the British Library, Or. 14004 and Or.14550, which have recently been fully digitised. 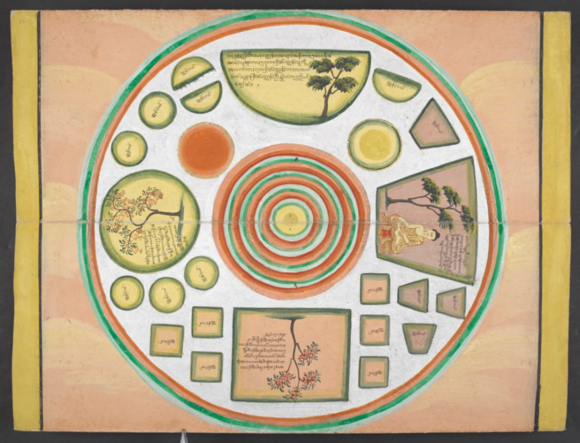 The universe contains the earth and other planets, and the sun and moon.  Mount Meru is in the centre and is encircled by seven concentric rings of mountain ranges, with seven great rivers in between. Beyond them lies the vast ocean with four great islands named after the huge trees that grow on them: circular Uttarakuru in the north, lozenge-shaped Zambudipa in the south, semi-circular Pubbavideha in the east and square Aparagoyana in the west. Uttarakuru has a wishing (padesa) tree which supplies its inhabitants with all their needs; these fortunate islanders have the most enviable existence: they never fall ill, and they live a thousand years.  The islanders of Pubbavideha and Aparagoyana are always born back to the same island.  The southern island, Zambudipa, is our earth and it is where twenty-eight Buddhas appeared, culminating with the Bodhisatta Prince Siddharta.

The first level, the Realm of Formlessness (Arupaloka), consists of four planes of brahmas who have no physical body, consisting entirely of mind, but who may create a physical body if they want to be seen. They are not completely free from the fetters of suffering (dukkha), but the dukkha experienced here is much less intense than that suffered in the Rupaloka. These brahmas are unable to hear the teachings of the Buddha (dhamma) and they can never become enlightened. 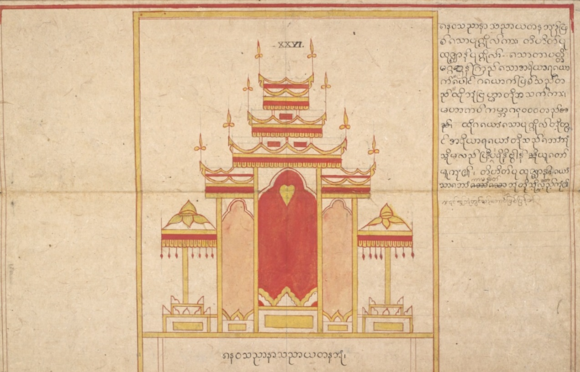 Nevasaññānāsaññāyatana bhuṃ, the highest of the four planes of the Arupaloka. The celestial pavilion is an elaborate structure with tiered roofs, with two white umbrellas on either side. British Library, Or. 14550, f.9.

The second level, the Realm of Form (Rupaloka), is inhabited by brahmas who have a physical body but do not enjoy sensual pleasures, and it is a place of less intense dukkha. This realm consists of 16 planes inhabited by Rupa brahmas divided into four categories according to their status of meditative absorption (jhana).  These Rupa brahmas can become enlightened if they come to know the dhamma. 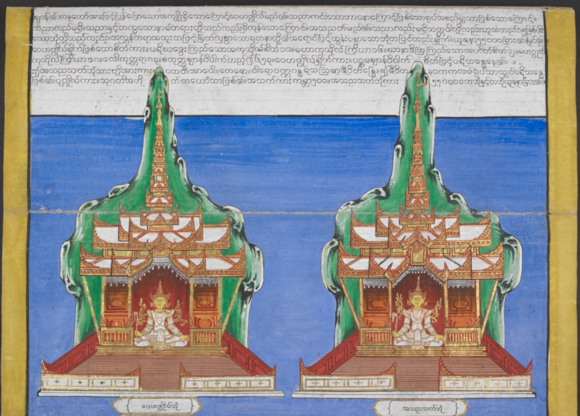 Vehapphala bhuṃ (21) and Asaññasatta bhuṃ (22): the two heavens are depicted as twin pavilions with seated Brahmas. British Library, Or. 14004, f. 11.

The third level, the Realm of Desire (Kamaloka), contains seven planes of happiness (six heavenly planes of devas and the human plane) and four planes of unhappiness. 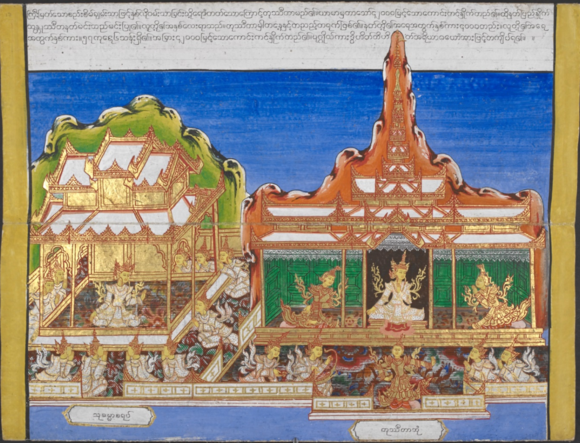 On the right, Tusita bhuṃ (9), where a deva is entertained by a harpist and a dancer. All future Buddhas (bodhisatta) are born in this heaven before their penultimate human existence. Beside the Tusita bhuṃ to the left is the Sudhammā rest house, where a deva is surrounded by ten other devas paying reverence. Tusita bhum is the most beautiful of the celestial worlds. British Library, Or. 14004, f.17. 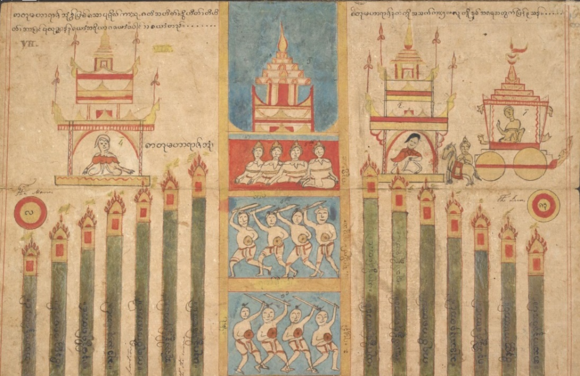 Cātummahārājika bhuṃ (6), the lowest of the deva worlds, is a third of the way down the cosmic pillars. This is the heaven of the four great kings who watch over the quadrant of the cardinal directions. One of the four kings is seated on one side and Devadhita  (a female deity) is seated on the other side. Matali, Sakka’s charioteer takes King Nemi on a trip to see the heavens and hells. The other dwellers are celestial musicians and the yakkas, tree spirits. The sun is on the right and the moon is on the left. British Library, Or. 14550, f.28

The plane of humans

5. Manussa bhuṃ (human beings). Both dukkha (suffering) and sukha (happiness) are found here, but this plane is the most fortunate of all because it is the only sphere in which moral initiative occurs and the only one in which perfect Enlightenment can be achieved. The beings here are endowed with a measure of merit and can find protection on their own. They can listen to and learn all the teachings of the Buddha. Bodhisattvas prefer the human realm as it is the best plane in which to serve the world and perfect the requisites of Buddhahood. 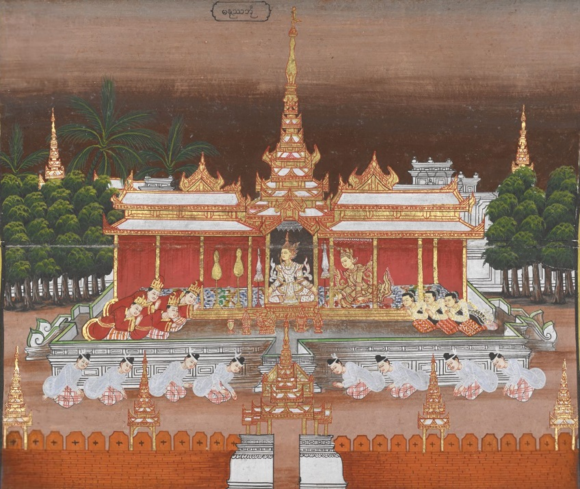 The four planes of deprivation (Apāya)

These lowest four unhappy planes are infernal states, in which beings pay the price for akusala (demeritorious acts) committed in their previous life. Buddhists believe that beings are born as animals on account of evil kamma. Sprits and ghosts possess deformed physical forms of varying magnitude, generally invisible to the naked eye.

4. Asura loka (demon world): the inhabitants of this plane are powerful and are opposed  to devas.
3. Peta loka (world of spirits and hungry ghosts): this plane is known as the “state of woe.” People share their merits with these beings when they do good deeds.
2. Tiracchāna loka (animal world): this is not a pleasant plane as beings have to search for food and fight each other to stay alive. 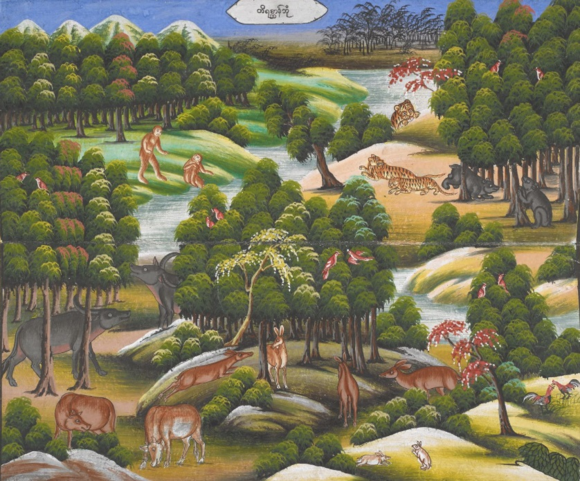 1. Niraya (world of hell): this plane is below the earth, in the deepest recesses of the Southern Island. There are eight different degrees of punishment: Sanjiva, Kalasutra, Sanghata, Roruva, Maharoruva, Tapana, Mahatapana and Avici. There is no happiness, only suffering, in this realm and it is the worst place to be reborn. States of punishment, depicted in a Burmese manuscript.  The guard has tied up the denizens of hell with hot iron chains as they learn their fate from the inflictor of hell; many are being burned in a great cauldron of molten metal; one is having red molten metal poured down his throat; some are hacked to pieces along the markings made by the black thread; some are running on very hot ground; and one is climbing up a tree which is full of thorns while the dog of hell waits below to eat him alive if he falls down. British Library, Or. 14004, f. 47

Good or evil kamma will bring rebirth in the plane of happiness (sugati) or the plane of suffering (duggati). After many cycles, if people manage to sever their attachment to desire and the self, they can attain Nirvana, which is a state of liberation and freedom from suffering.

Posted by Annabel Gallop at 3:26 AM