More than a Book: a new display of Southeast Asian manuscripts

Visitors to the British Library building at St Pancras will recently have noticed a new display in the Southeast Asian exhibition case by the entrance to the Asian and African Studies Reading Room on the third floor. ‘More than a Book’ presents examples of writing from Southeast Asia in a range of unusual formats and materials, with texts incised on bamboo and gold, painted on paper with a brush, written on gilded wood, printed on silk, and even woven into cotton binding tapes to be wound around a book of palm leaves. 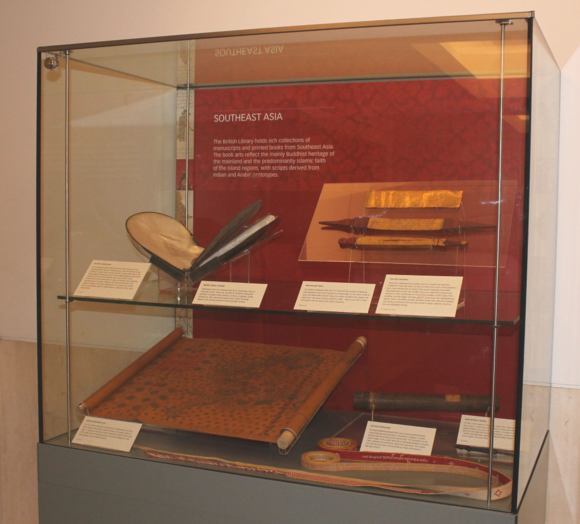 More than a Book: a new display of writing from Southeast Asia, at the British Library

In pride of place is the Burmese 'Butterfly Book’ (Or. 16052), as we have named what is actually a printed petition presented to a colonial official.  No government officer could ever have received a more beautiful document than this formal address, created in around 1907 on the occasion of the first visit to Mergui of the British Governor of Burma. Mergui (Myeik) is a coastal town on the Tenasserim Coast (the present-day Taninthayi Division), the southernmost district of Lower Burma (Myanmar). Technically this is not a hand-written manuscript, for the Burmese words have been typeset and printed onto ‘wings’ of silk, and bound within a large oyster shell.  In the petition, local residents offer sincere thanks to the Government for the construction of roads, and express their belief that the expansion of transport networks will bring more benefit to the region. Included in their long ‘shopping list’ is a request for a marine ferry to ply between adjacent coastal towns, a telegraph office, and aid in building a new hospital.

Burmese 'Butterfly Book', printed petition of 1907 from the residents of Mergui presented to the visiting British Governor of Burma. British Library, Or. 16052

Also from Burma are two sazigyo, or woven binding tapes for winding around sacred texts.  Among the ways in which Burmese Buddhists believe that merit can be gained is by commissioning and donating a sazigyo to a Buddhist monastery. There are many types of sazigyo: some are purely decorative but others are woven with texts recording the names of the donors, their titles and distinctions, and their deeds of merit. The donors usually call on devas and humans to applaud their meritorious deeds.

The larger red sazigyo is from a manuscript of Pacitʿ Pāli, a canonical text of Theravāda Buddhist monastic rules (Or. 4846). The text on the sazigyo is in verse, and begins with the word Zeyatu which means ‘success’. The donors call upon the universe to hear the news of their donation of the scripture of the Buddha’s glorious teaching, and express their hope that by the merit of this donation they may swiftly and directly reach the cessation of afflictions (Nirvana).  The inscription on the smaller yellow sazigyo (Or.15949/2) suggests that both the manuscript and the binding tape were donated to the Sayadaw (Abbot) of Bangyi monastery. 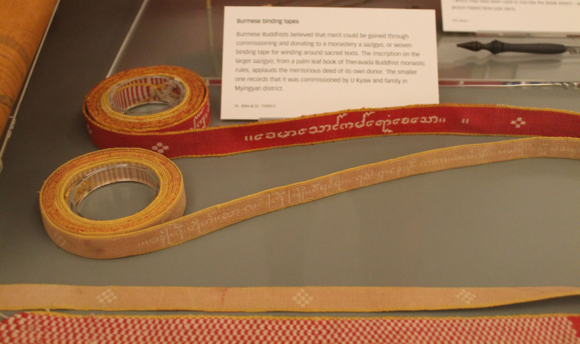 From northern Thailand come two wooden title indicators, written in Thai in Dhamma script, decorated with red lacquer and gold leaf. The titles of the palm leaf manuscripts to which the title indicators were attached with a cord are incised on the gold background, together with the names of donors and honoured persons. The small title indicator was made for a manuscript containing the Vessantara Jataka copied in 1925 (Or.14528), while the larger one belonged to a text from the Abhidhamma dated 1930 (Or.14529). These title indicators were used to help retrieve manuscripts when they were stored in large chests or cabinets at Buddhist temple libraries.

On the lower shelf is an imperial Vietnamese scroll (Or. 14817/A). In 1793 a British embassy to China led by Lord Macartney ran into a storm while off the coast of central Vietnam, and issued a plea for help. In response, the Tây Sơn ruler of Vietnam, Emperor Cảnh Thịnh (1792-1802), sent a welcoming party to the British delegation, with food supplies and this beautiful scroll.  The scroll is written in Han Nom characters on orange paper decorated with a large dragon, and bears the royal seal stamped in red ink. 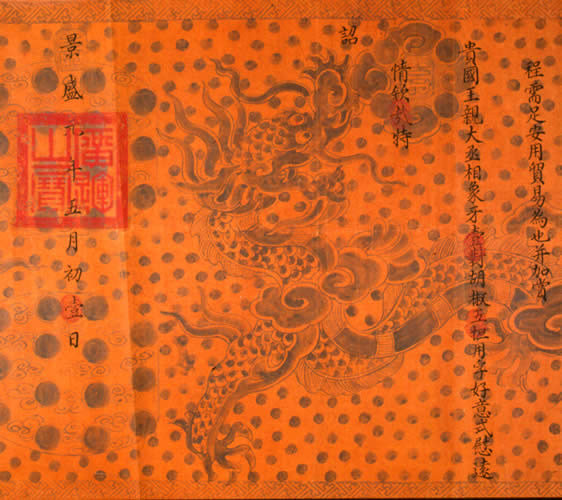 At the back of the case is an example of Batak writing on bamboo (MSS Batak 1), from north-east Sumatra. In 1823, at the request of his British visitor John Anderson, the King of Bunto Pane wrote on this piece of bamboo the Batak numbers one to ten, and a reminder to Anderson to send him two dogs once he had returned to Penang. In the bamboo container are found a knife – which may have been used to inscribe the Batak letters – and four poison-tipped blow-pipe darts.

Lastly, but catching all eyes at the top of the display, is a letter written on a sheet of pure gold, from Bali (Egerton 765). This letter in Balinese was sent in 1768 from the princes of Badung and Mengwi to the Dutch Resident of Semarang, on the north coast of Java.  Inscribed in Balinese language and script with a sharp stylus on a piece of gold in the  shape of a palm leaf – the usual writing material in Bali – the princes affirm their friendship with the Dutch East India Company.

Posted by Annabel Gallop at 4:44 AM