The British Library holds a small but significant collection of manuscripts from West Africa. As part of his PhD research, Paul Naylor is cataloguing the collection and identifying its contents for the first time. Here, he introduces the collection and gives his preliminary results.

The manuscripts were paginated and bound in leather, and have remained largely undisturbed ever since. That they were not seen as important is shown by the brief, vague and sometimes shockingly dismissive handwritten records of acquisition: an 1895 entry, for example, uses the phrase: ‘Muslim catechisms prayers and charms in a barbarous African style of writing’.

Thankfully, scholarship has moved on from this view, and manuscripts from West Africa, as from any other part of the world where manuscripts in the Arabic language are created and studied, are now seen as valuable in their own right and important for the study of the societies that produced them. One of the aims of my research project is to facilitate the study of these manuscripts by providing detailed catalogue records and search terms for the collection, so that it will be easily searchable through the British Library’s online catalogue.

Work on the West African manuscripts to date suggests that these items can play a part in removing some of the myths and stereotypes about pre-colonial West Africa. They show that the region was very much connected with the rest of the world, and a place in which education and the written word had a high value. The collection shows a real desire to widen horizons and expand knowledge, and gives us a very personal glimpse of the individuals at the forefront of this movement, to which they dedicated their lives. It is for this reason that it is so satisfying to re-examine and bring to light this rich collection, which should now gain the recognition and scholarly attention it deserves.

Language and script in the manuscript culture of West Africa
Before the colonial period, ‘Arabic was the Latin of Africa’, in the words of the distinguished Africanist scholar John Hunwick[1]. Islam and Arabic learning first reached the West African region between the 9th and 13th centuries. Muslims must recite the Qur’an and the five daily prayers in Arabic, and therefore in West Africa, like anywhere else, to be a Muslim means at least learning to read Arabic script. Religious education in West Africa is and was in Arabic, although the teacher may in some cases explain the reading material in the local language. In 19th century West Africa, a place with more than a thousand regional languages but a remarkably uniform Arabic education system, Arabic was the means of written communication between educated people.

Almost all the West African material in the British Library’s collection is in Arabic. However, while the main body of text is always in Arabic, copyists and authors often include extensive notation in their own language transcribed in Arabic script (ajami) in the margins. In our collection we have established so far the presence of two West African languages, Soninke and Fulfulde. 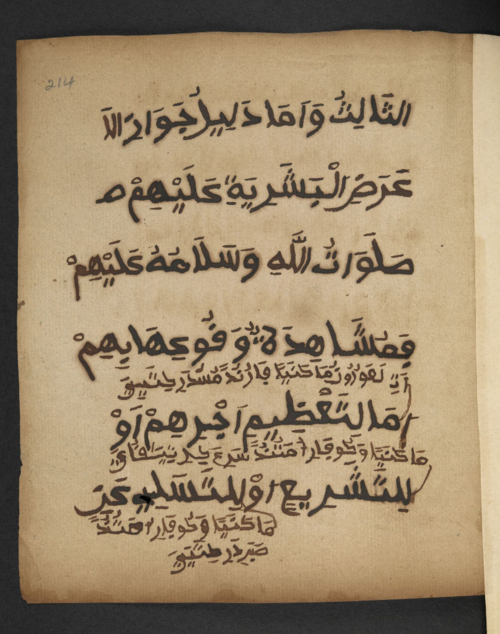 Page from the ‘Middle Creed’ of Yusuf al-Sanusi, a text arguing for the existence of one God. The larger text is in Arabic, the smaller text a gloss in the Soninke language (British Library Or.6473, f.214r)

The type of Arabic script used by West African copyists can broadly be classified as ‘Maghrebi’, that is, Arabic in the style written in historical Andalusia and North Africa. It was from these regions that Arabic learning first reached West Africa. Although the French ethnographer Octave Houdas first described Arabic calligraphy south of the Sahara as a unique category in 1886, it was not given much attention. In the 2000s, several Arabic scholars with an interest in West Africa begun to note the wide variety of regional West African calligraphic styles, tentatively classifying features unique to each centre of manuscript production such as Hausaland, Bornu and Masina (Mali)[2]. Much work remains to be done in this field however, and neither the number of distinct styles of West African calligraphy nor the terms to designate them have been fixed. Making the British Library collection more accessible may provide significant contributions to a field that is still in its infancy.

The book in West Africa
Historically, books in West Africa were rare and expensive items and were normally held in small private libraries and passed between scholars, who copied them by hand for their own use. These scholars were teachers and sometimes copyists and scribes as well; many travelled extensively in the West African region, taking their books with them. Manuscripts were generally unbound, and none of the West African works in the British Library collection were originally bound. A century ago, the practice of the British Museum was to bind them upon acquisition, which means that there can be up to 150 separate works in a single volume.

Paper in West Africa was expensive, imported from Europe via North Africa and later the Atlantic coast. As a result it is very rare to find a blank or sparsely covered sheet of paper in the collection. Every scrap of paper was utilised.

One of the really spectacular finds in this collection is a letter from a Muhammad al-Amin Suwaré in Touba (probably in the Senegambian region) to his son, living nearby. Muhammad complains that a scholar to whom he had lent one of his books to copy had not given it back, and had even demanded payment for its return. Muhammad al-Amin asks his son to get this book back to him ‘quickly, quickly, quickly’, angrily remarking ‘I would never agree to buy my own book!’

Letter from Muhammad al-Amin to his son, with words underlined in red ink by the indignant scholar (British Library Or.6473, f. 190r)

As well as capturing the importance of books and book ownership in 19th century West Africa, the letter is wonderfully personal. Muhammad fumes against the scholar in question, saying he is a man of no religion, before adding in a rather embarrassed note that this scholar could not really have stolen the book, ‘because he is a god-fearing man of faith and learning’. Muhammad also highlights some expressions in the letter as good examples of Arabic grammar for his son, giving their explanation with notes linked by arrows to the main text.

Identifying the collection
Before I started work on the collection, there was very little information about what kind of material it contained, where in ‘West Africa’ it may have come from and how old the works might be. The main task was to look at each work in detail and glean as much information about it as possible. What is the subject area? Does the work have a title? Do we know the identity of the author? Can we get any information about the person who copied it? Where might they have lived, and when?

In a pre-printing age, the only way to reproduce written texts was to copy them out by hand. As a result, almost all the works in this collection are copies of earlier, well-established works. It was not common practice to record the date a work was copied, although strangely the copyist often notes the day and time the copy was finished, ‘on Friday, after the midday prayer’, for example. The best way to estimate the earliest date the copy could have been made is therefore to find out the dates of the individual who created the original work.

The collection has copies of the works of many authors who were writing around the middle of the 19th century. Judging also by the paper – and in West Africa paper has an especially short lifespan - these manuscripts were probably written around the same time. However, many works in the collection were originally composed as long ago as the 12th or 13th centuries, so these manuscripts may well be older than the mid-19th century.

While it is sometimes possible to identify the authors of these works, more often than not the copyist is more elusive, providing no name or often ‘signing’ the copy only with pious epithets such as ‘I have completed it, may God forgive my sins’. However, many works in the collection have colophons, that is, statements at the end of a work giving the name of the copyist, the owner and sometimes additional information. The colophon was also the occasion for the copyist to show off his drawing skills and many colophons in the collection have colourful or geometric designs. 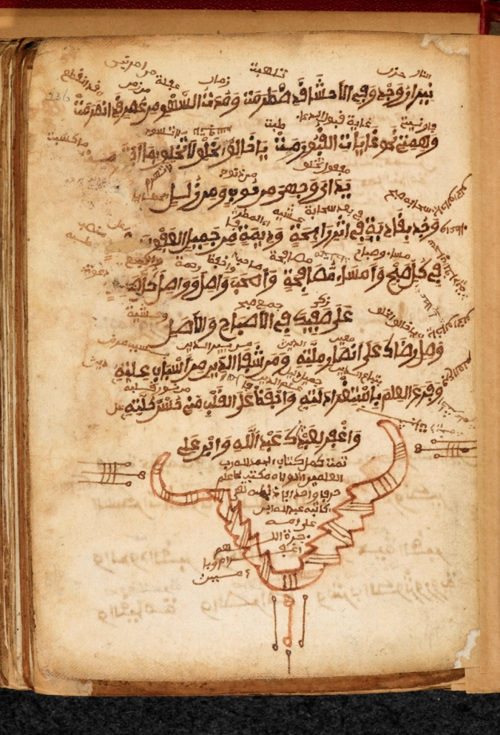 Colophon marking the end of a series of commentaries on lines of poetry by Sheikh Abdullah ibn Ali, who also made this copy (British Library Or.6880, f. 236r)

Most names given for the copyists are so common as to be untraceable, although one, the family name Suwaré, occurs ten times across two manuscripts in the collection. The Suwaré were a family based around the town of Toubacuta in present-day Guinea, founded in 1824[3].

Part 2 of this blog will take an in-depth look at some of the items in the British Library’s West African manuscript collection.