The seals of Sultan Ahmad al-Salih of Bone

Last year the British Library digitised the personal diary of Sultan Ahmad al-Salih Shamsuddin, 22nd sultan of the kingdom of Bone in south Sulawesi, who reigned from 1775 until his death in July 1812. The diary (Add. 12354), written in the king’s own hand in Bugis language and script, is an extremely important historical source for Bone. Daily entries cover a wide range of subjects from political events and religious ceremonies to notable visitors, births, deaths and marriages in the royal family, and even unusual weather patterns, as revealed in the doctoral study of this diary by Rahilah Omar (2003). 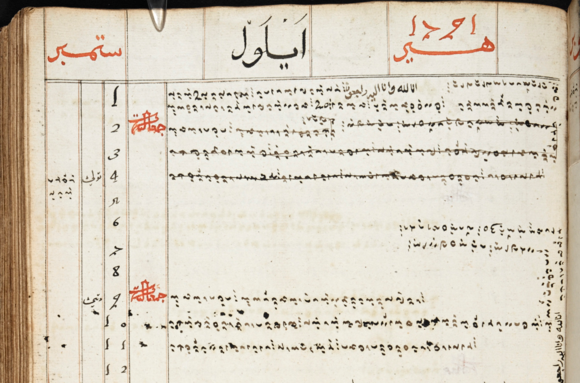 In his diary entry for 10 September 1791, Sultan Ahmad al-Salih makes an oblique comment about a seal: ‘Ijiq came at the request of the Tomaraja (Dutch Governor), to show me the seal made by the Sanggalea named Tukamajai. I told Ijiq, “That seal may represent me, but it’s not my seal”.’ (Reading by Rahilah Omar). British Library, Add. 12354, f. 123v (detail).

There are frequent references in the diary to the use of seals in the administration of the state of Bone: at the investiture of officials such as the Arung (Lord) of Timurung and the Sulewatang (Regent) of Palakka, the sultan would grant them seals. Sultan Ahmad al-Salih’s own seal, an eight-petalled circle, is well-known from a number of manuscript letters, including two in the British Library.  It is inscribed in Arabic in the middle, ādāma Allāh Sultan Ahmad al-Salih Syamsuddin fī mulkihi wa-sulṭānihi Bone, ‘may God preserve Sultan Ahmad al-Salih Syamsuddin in his realm and dominion of Bone’, and around the border, ‘Allāh al-Dā’im bilā fanā’ Allāh al-Bāqī bilā zawāl, ‘God, the Eternal One, never ending; God, the Enduring One, never perishing’. 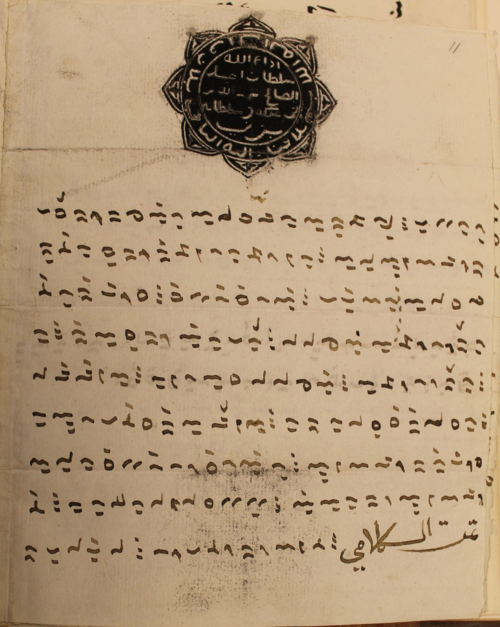 But tucked between the pages of Sultan Ahmad’s diary is one of the most intriguing seal-related documents known from Islamic Southeast Asia: a sheet of seal designs, most likely sketched by the sultan himself. Five octagonal seals are drawn, in varying degrees of completeness and orthographic correctness, all in the name of Sultan Ahmad al-Salih of Gowa, and dated 1201 (AD 1786/7). All bear essentially the same inscription, with the most complete manifestation being found in the seal in the centre of the page: al-sulṭān al-‘ārif billāh Ahmad al-Salih jāharat al-millah wa-al-dīn fī baldat Gowa wa-āhlahā // 1201 hijrat al-nabī ‘alayhi afḍal al-ṣalwat wa-azkā al-taslīm // Allāhumma ṭawwala ‘umrahu wa-saḥḥaḥa ajsādahu wa-nawwara qalbahu wa-thabbata a‘mālahu wa-awsa‘ ārzāqahu, ‘The sultan who is wise in God, Ahmad al-Salih, proclaimer of the nation and religion in the state of Gowa and its people // [the year] 1201 of the hijrah of the prophet, on him be pure benedictions and bounteous blessings // O God, lengthen his life, keep all his body healthy, enlighten his heart, strengthen his works, and increase his blessings’ 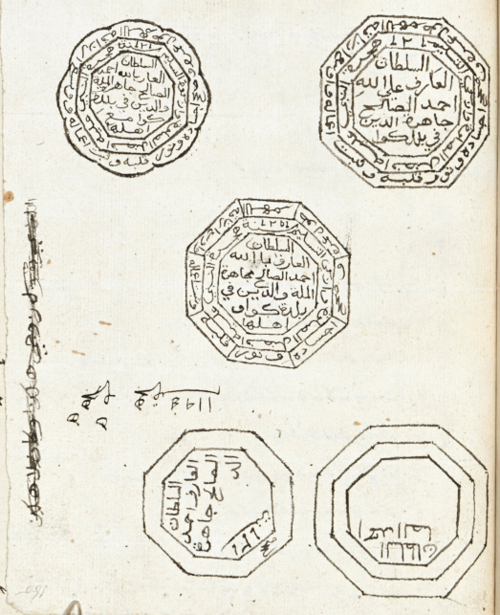 Seal designs of Sultan Ahmad al-Salih of Bone describing himself as ruler of Gowa, found in his personal diary.  British Library Add.12354, f.160r

This reference to Ahmad al-Salih as the ruler of the Makassarese kingdom of Gowa is quite surprising, as Ahmad does not feature on any acknowledged kinglists of Gowa. Yet intermarriage between royal families was just as rife in south Sulawesi as it was in Europe, and in fact Ahmad al-Salih was descended from the royal families of both Bone and Gowa: his maternal grandfather was Sultan Abdul Razak Jalaluddin of Bone (r.1749-1775), while his paternal grandfather was Sultan Shahabuddin Ismail of Gowa (r.1709-1711).  Sultan Jalaluddin had selected Ahmad as his heir as ruler of Bone partly because of his paternal royal Gowa blood, in the hope that he would one day unite the two thrones (Rahilah 2003: 50-51). However, in 1777 a former ruler of Gowa who had been exiled by the Dutch to Sri Lanka, I Sangkilang, captured Gowa and ruled it until his death in 1785.  After I Sangkilang’s death, the Dutch seized the regalia of Gowa and presented it to Ahmad al-Salih. With both regalia in his possession, Ahmad al-Salih planned to unite the two kingdoms, and it was evidently just around this time that he began designing his new seal as ruler of Gowa.  In the event, though, Sultan Ahmad’s plans were thwarted by the Dutch who belatedly feared that the joint kingdom of Bone-Gowa would be too formidable to control (Andaya 1996: 107).

There is no evidence that an octagonal seal was ever made up for Sultan Ahmad.  However, in the Tropenmuseum in Amsterdam we find a photograph of the original seal matrix of Ahmad’s Bone seal, together with an oval seal in his name as sultan of Gowa (KIT 915/2). The border inscription in the oval seal is the same as that in the octagonal sketches. But in the centre panel, rather than describing himself as 'wise', al-'ārif - a word with strong Sufi overtones implying esoteric knowledge of God, reflecting Ahmad al-Salih’s well-known mystical leanings - in the oval seal Ahmad has laid claim to the even more ambitious title al-sulṭān al-kāmil, ‘the Perfect Sultan’, unmistakeably evoking the Sufi doctrine of al-insān al-kāmil, ‘the Perfect Man’ (cf. Arberry 1979: 104). 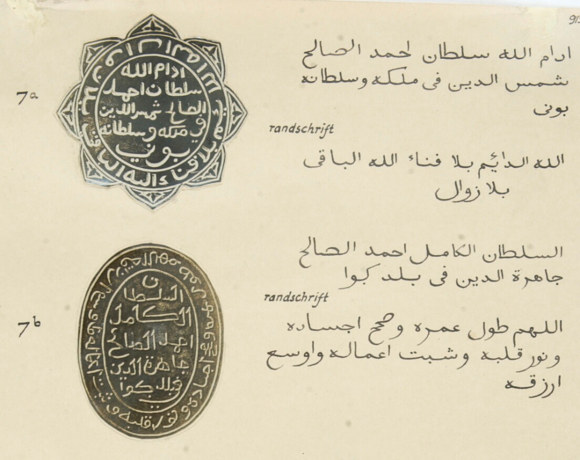 These photographs in the Tropenmuseum document a collection of 43 royal seals from Bone captured by the Dutch in 1905, and placed in the Museum of the Bataviaan Society (Bataviaasch Genootschap). In 1931, the seals were returned from Batavia to Bone for the installation of the last sultan, Karaeng Sigeri, and are today held in the Museum La Pawawoi, a former royal residence in Watampone, Bone, South Sulawesi. Needing to check some details for my forthcoming catalogue of Islamic seals from Southeast Asia, and with little prospect of visiting Watampone in person in the near future, I put up a plea on Facebook in October 2015 requesting help from 'FB friends' in South Sulawesi. I am immensely grateful to Dr Mukrimin, lecturer at IAIN Sultan Amai Gorontalo and an expert on Bugis migration, who, within a few days, went to the Museum and, with the assistance of Mr Irsafril, photographed for me the collection of royal seals.

Collection of royal seals from Bone, dating from the 17th to 19th centuries, on display in the Museum La Pawawoi, Watampone. Photograph courtesy of Mukrimin.

And it was only from Mukrimin’s photographs that a final piece of the puzzle fell into place. I could not understand why the Tropenmuseum photographs of seals were all numbered from 1 to 43, except for the two seals of Sultan Ahmad which were numbered 7a and 7b. Mukrimin’s photograph below shows that this is actually a double seal matrix, with Ahmad al-Salih’s 8-petalled seal as sultan of Bone on one face, and his oval seal as sultan of Gowa on the other. But while the Bone seal has been found stamped on over 28 letters and treaties covering the period from at least 1791 to 1809, no documents bearing the Gowa seal have yet been traced, probably reflecting the fact that Ahmad's ambition to wield jurisdiction over both kingdoms was never fully realised. 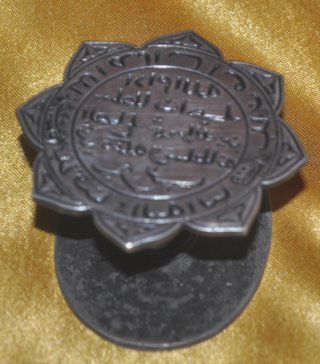 With thanks to Rahilah Omar for information on references to seals in the diary of Sultan Ahmad al-Salih Shamsuddin, Bink Hallum for help with the Arabic transliterations and translations, Ingeborg Eggink and Koos van Brakel of the Tropenmuseum, Mukrimin and Irsafril for  photographs of the seal matrices, and the Director of the Museum La Pawawoi, Andi Baso Bone Mappasessu.

Posted by Annabel Gallop at 1:22 AM